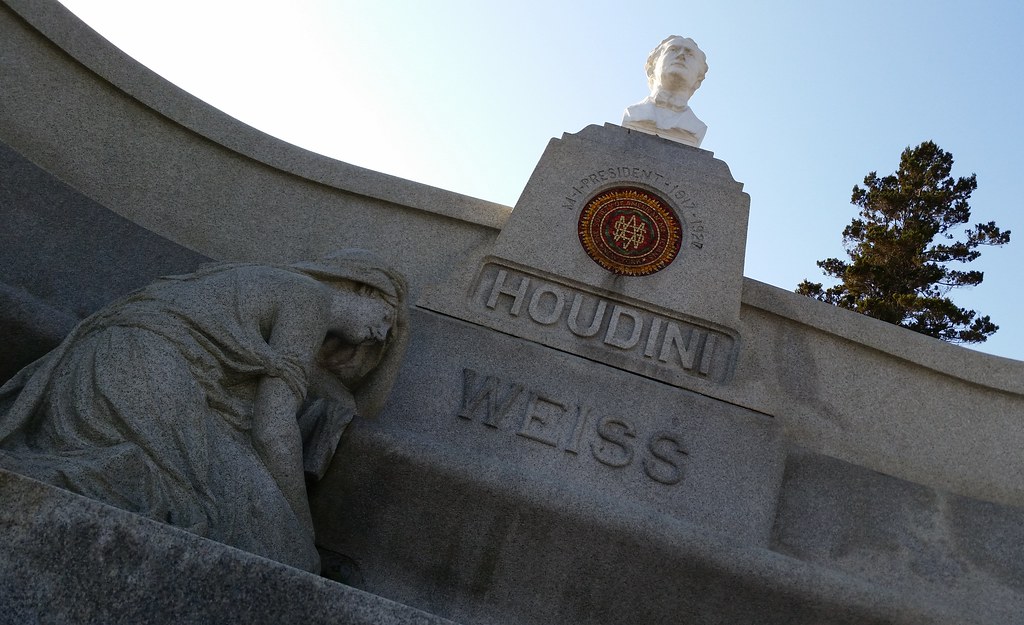 We've now moved on to Machpelah Cemetery (where, coincidentally, Joseph Banzer of Banzer's Cypress Hills Park was for years the superintendent). The "daunting, abandoned building that was once the cemetery office", seen in this video, was demolished in August 2013.

Harry Houdini, the legendary illusionist and escape artist, was buried here in 1926 following his death at the age of 52 from a ruptured appendix that may or (more likely) may not have been caused by a young man punching him in his stomach to test his abdominal strength. While Jewish custom dictates that the dead be interred in plain wooden coffins, Houdini was reportedly laid to rest in a metal-and-glass casket he had specially ordered for use in one of his stunts. Buried with him, as a pillow for his head, was a collection of letters that his late, dearly beloved mother had sent him over the years.

In case you're wondering, the colorful circular mosaic above depicts the logo of the Society of American Magicians, which Houdini presided over from 1917 to until his death. Every year, magicians from the Society hold a "broken wand ceremony" here to commemorate his death. The ceremony used to be held on Halloween, the anniversary of Houdini's death (on the Gregorian calendar), but around 1994 Machpelah's manager decided to start closing the cemetery on Halloween in an attempt to ward off vandals. The magicians now hold the ceremony on the anniversary of Houdini's death on the lunisolar Hebrew calendar — the 23rd of Cheshvan (which was November 16th this year) — except when that date happens to coincide with Halloween.

The bust of Houdini on the pedestal above is the latest of several to grace the monument; the others were all stolen or destroyed. From 1993 on, for almost two decades, the pedestal stood empty except during the annual broken wand ceremony, when the attending magicians would show up with a portable bust. The bust above has been in place since 2011, when a trio of "Houdini commandos" from the Houdini Museum in Scranton, Pennsylvania swooped in and installed it in an (initially) unsanctioned operation.

One other grave-related note: one of the smaller gravestones in front of the monument bears the names of both Houdini and his widow Bess. However, Bess is actually buried in Gate of Heaven Cemetery, a Catholic cemetery, in Westchester County. It's not entirely clear why the plans were changed and she didn't end up here in Machpelah, but I found one article that said her sister, "upset because Bess had given up her Catholicism to marry the Jewish showman", was the one who decided to bury her in Gate of Heaven instead.