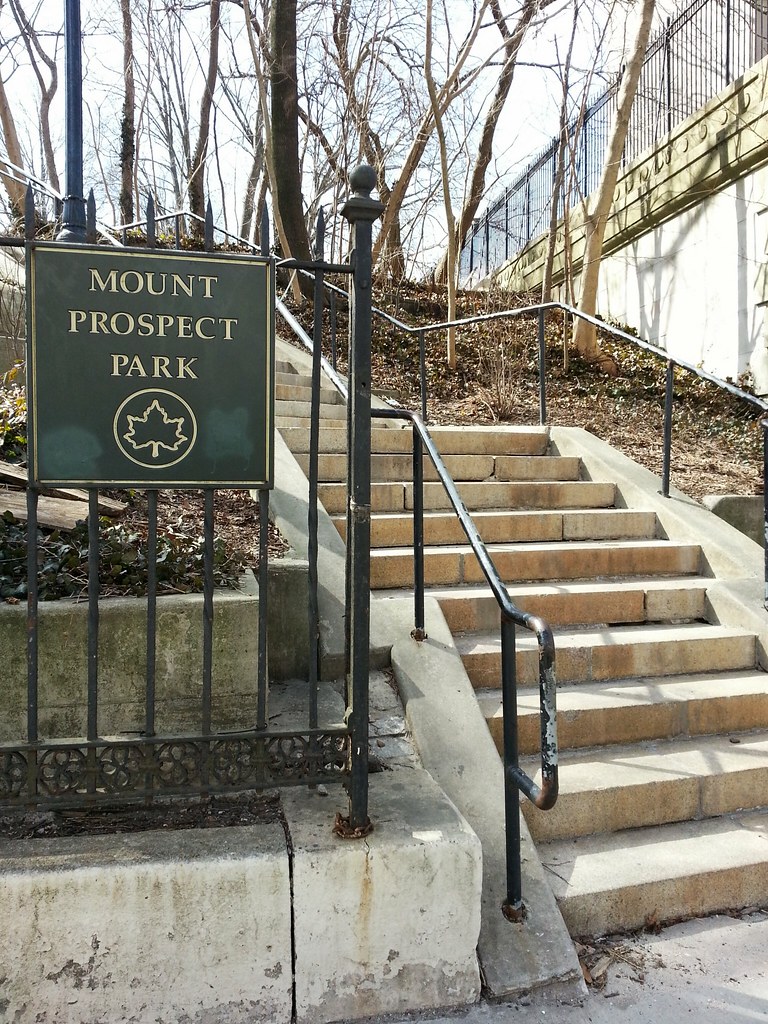 Home to the second-highest peak in Brooklyn, this park occupies the former site of the Mount Prospect (or Prospect Hill) reservoir. Here's an early 20th-century postcard view of the reservoir and its water tower. 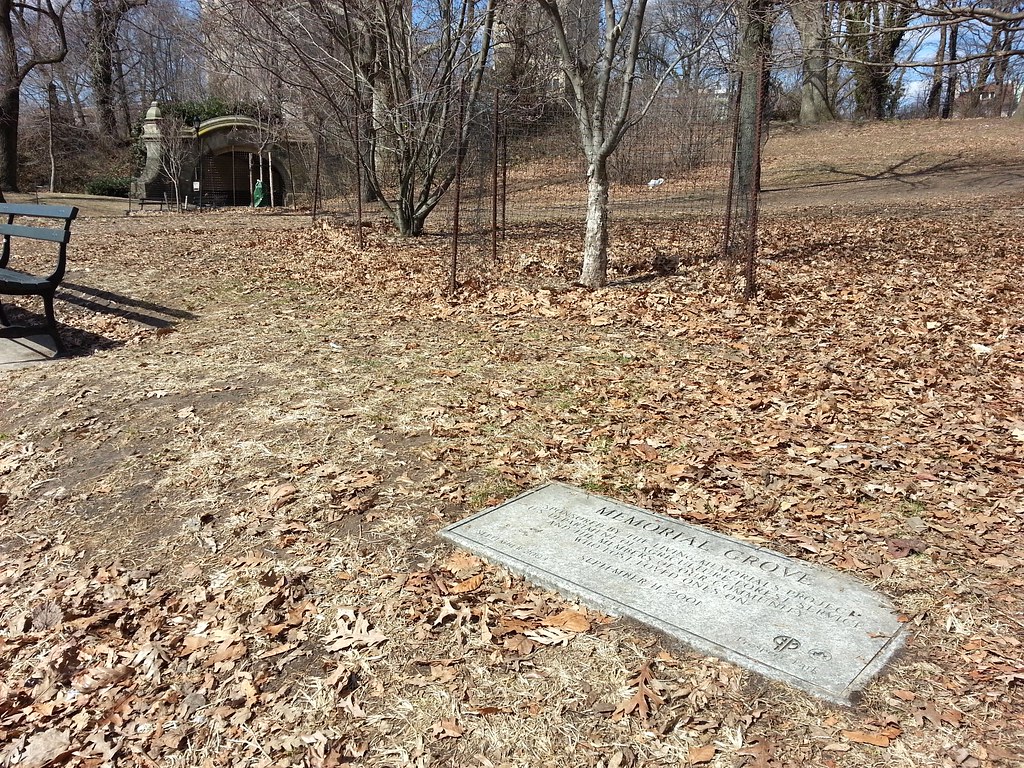 I assumed that this memorial grove in Prospect Park would consist of trees planted around the time of the grove's dedication in 2003, so the scarcity of young trees in the area (you're looking at just about all of them) made me wonder if some others had died and been removed over the past decade. This page leads me to believe that the grove's creation mostly involved the restoration of an existing treed area of the park, however, which makes more sense given the surroundings. You can take a look around the grove here. 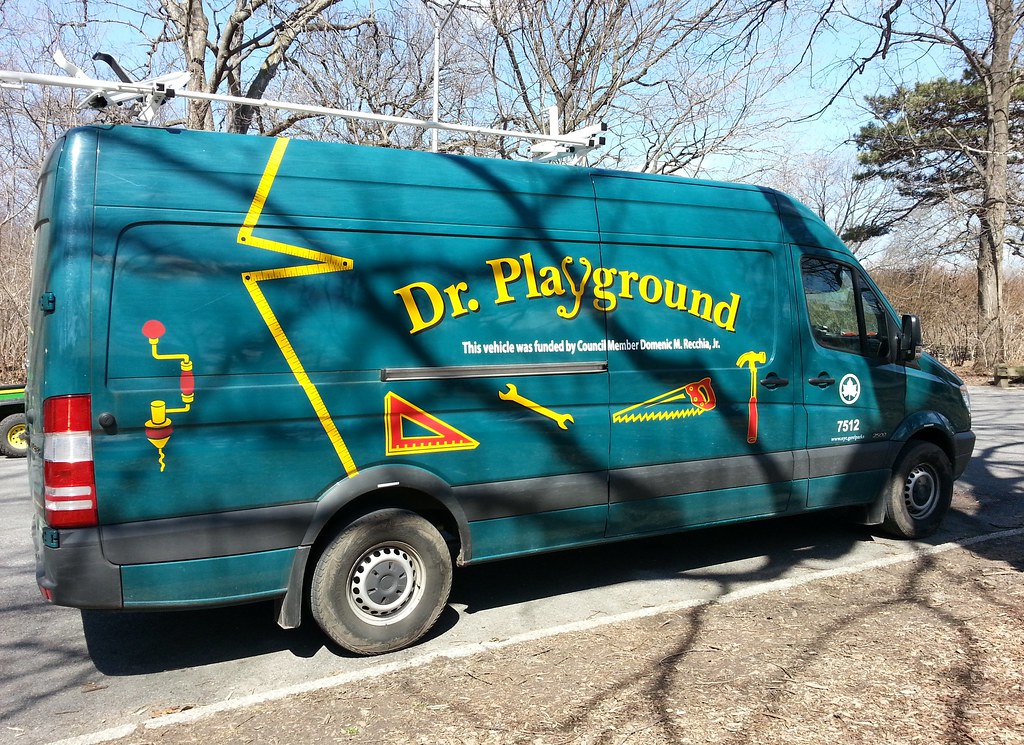 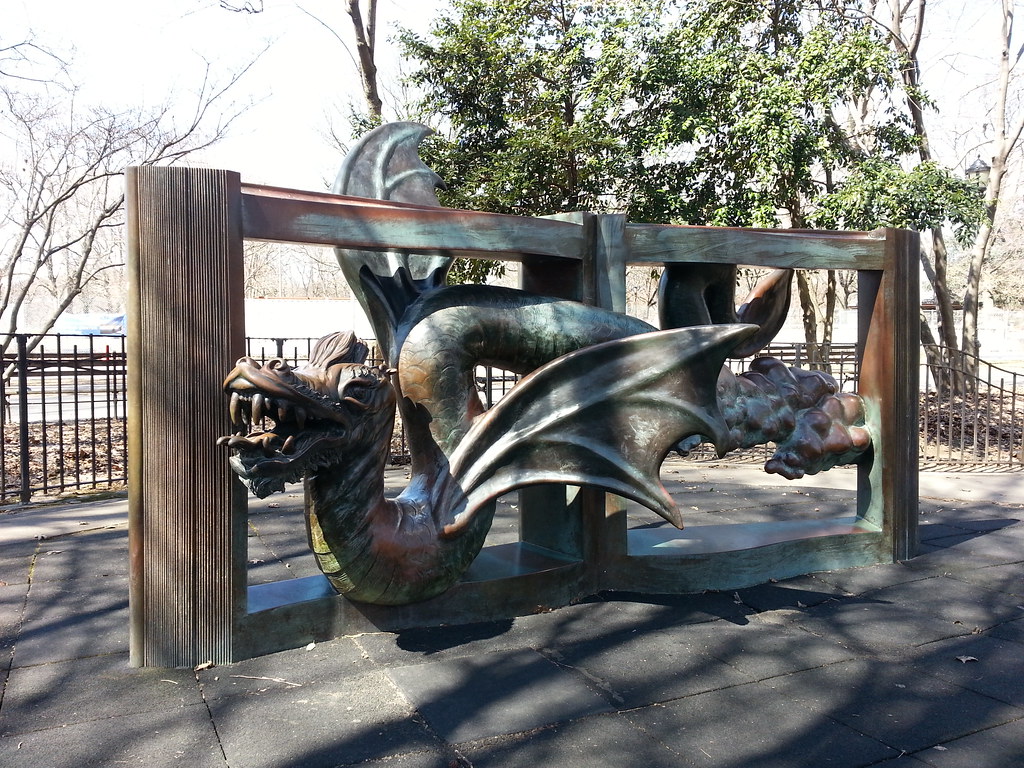 In the warmer months, sheets of water flow from this sculpture at Prospect Park's Imagination Playground. 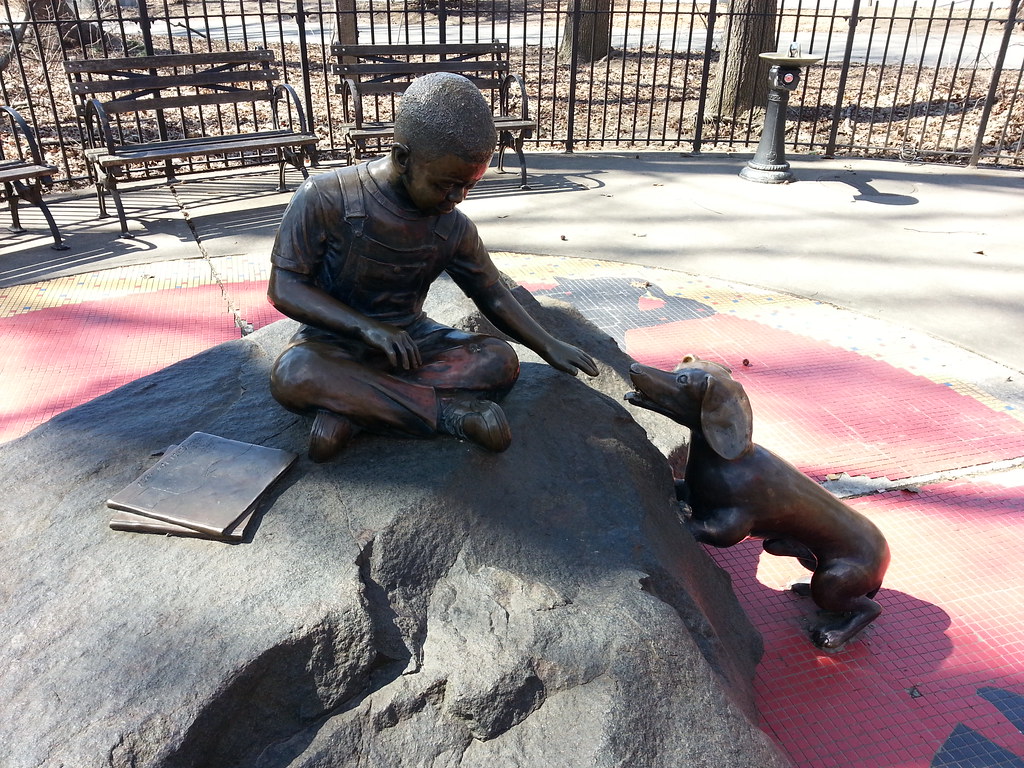 This sculpture at Prospect Park's Imagination Playground was inspired by Ezra Jack Keats's book Peter's Chair. From the NY Times:

When the playground opened in 1997, the sculpture of Peter was a deep blue. "The ears soon lost their patina," Mr. Zimmerman said, "because kids would sit on the rock and whisper to Peter." 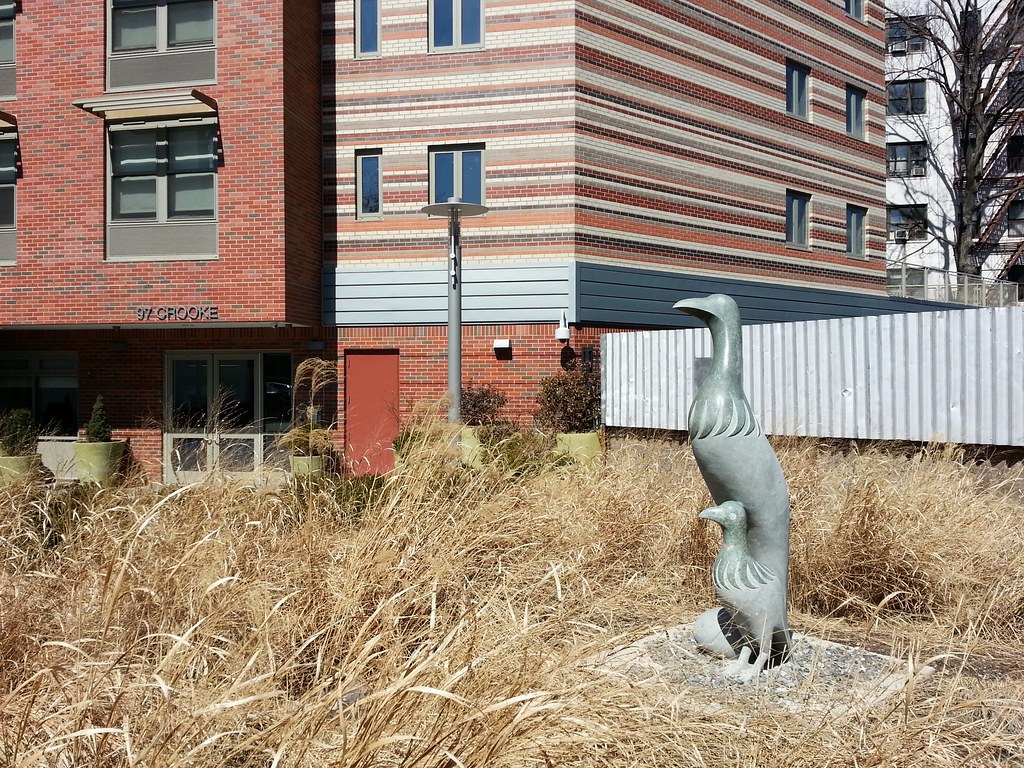 This 53-unit building for low-income and formerly homeless individuals was erected on a long-vacant, oddly shaped lot abutting the tracks of the Q train (aerial view). The interior décor includes Shona stone sculptures, so it seems like a decent bet that the carved birdies pictured here also hail from Zimbabwe.

No parking between the columns 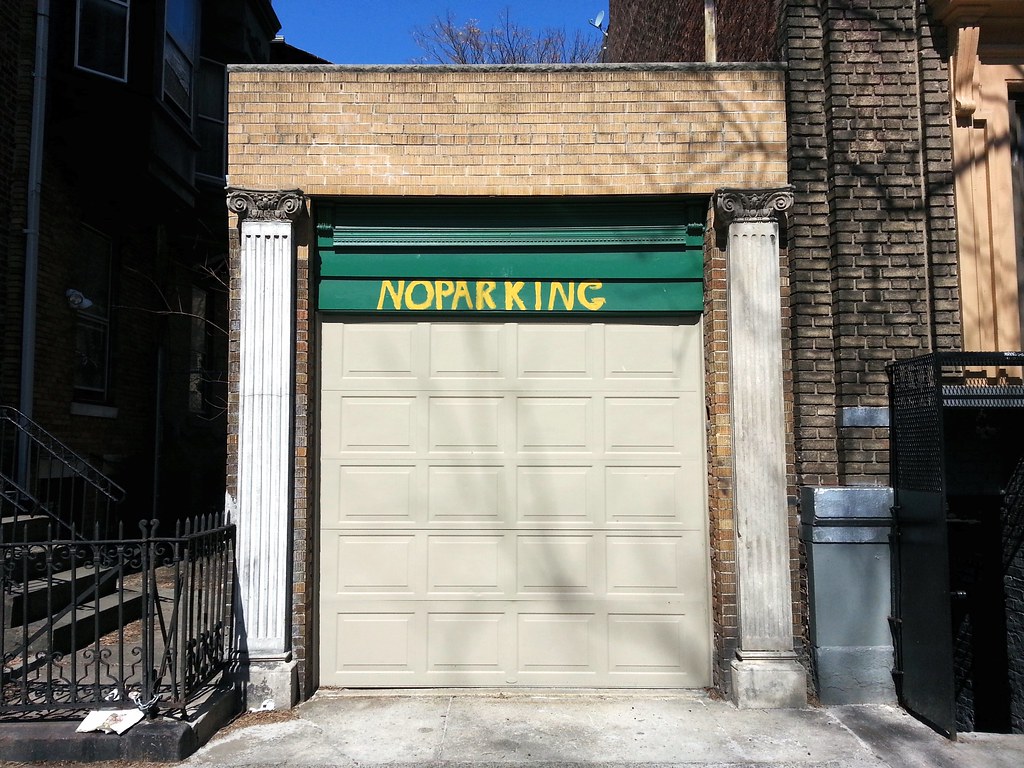 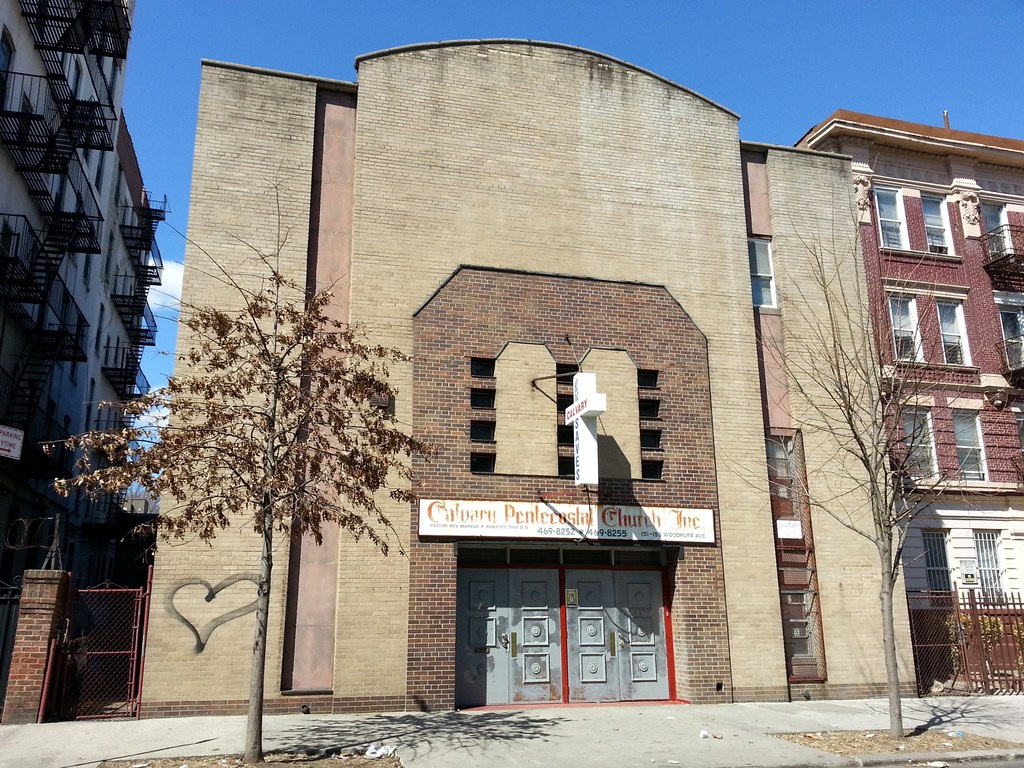 This churchagogue was once home to the Woodruff Avenue Temple. A subtle vestige of the building's past can still be found above the doorway, where the "JESUS SAVES" cross is attached to two shapes that resemble the tablets of the Ten Commandments, but the Jewish origin of the structure was much more apparent just a few years ago, as you can see. 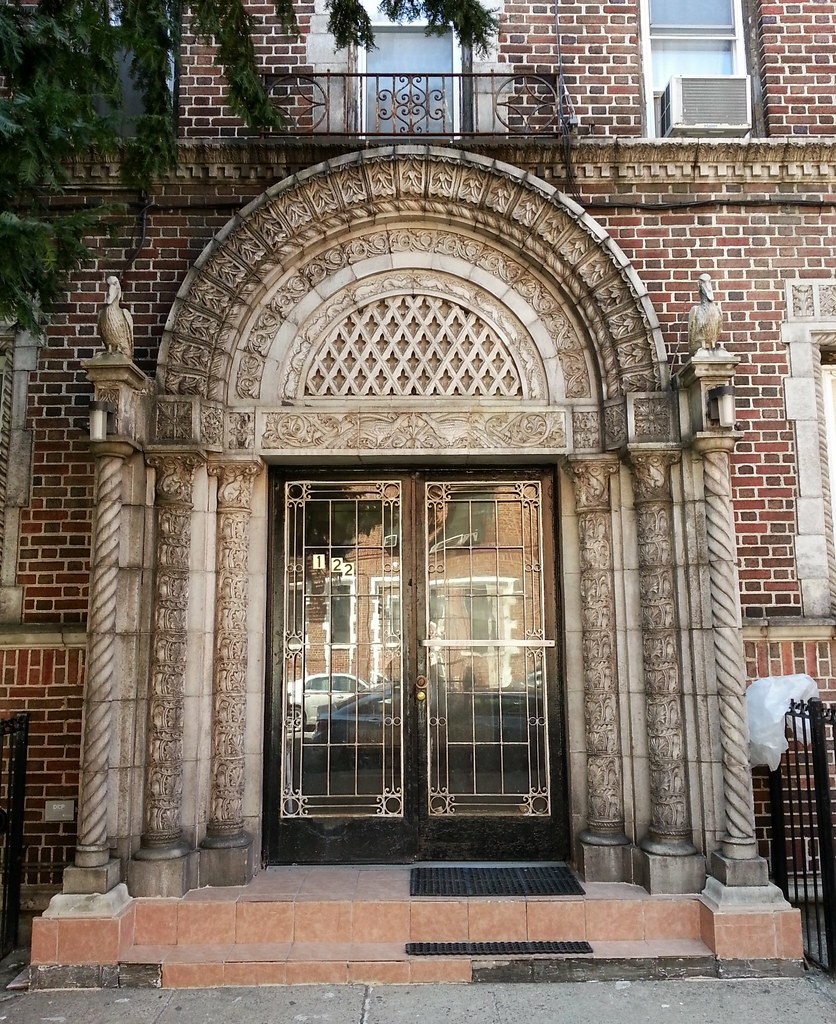 A closer look reveals a number of other birds, as well as some rat- or weasel-like creatures, interwoven into the ornate patterns surrounding the doorway. 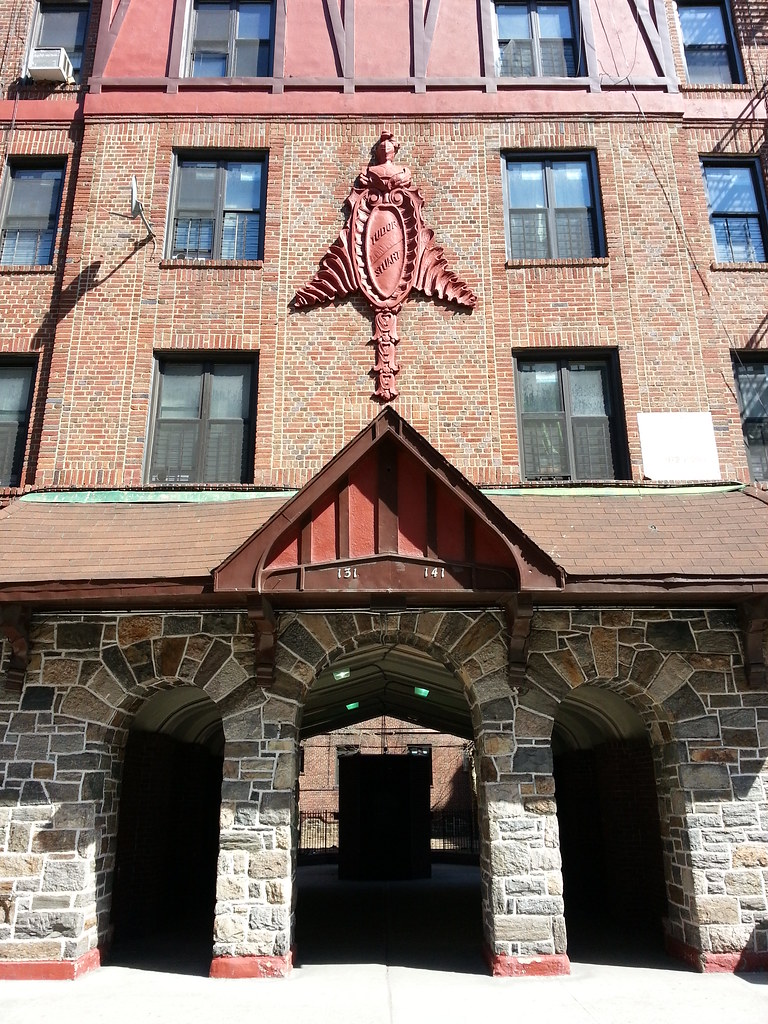 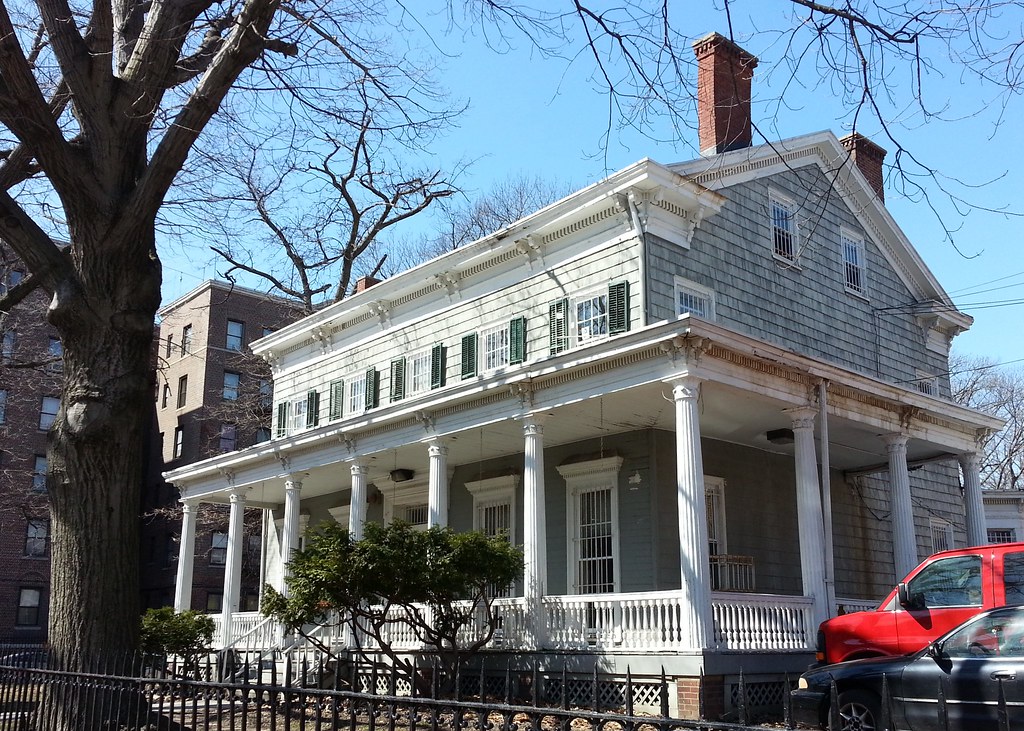 of the Flatbush Dutch Reformed Church, relocated across the property to this site in 1918 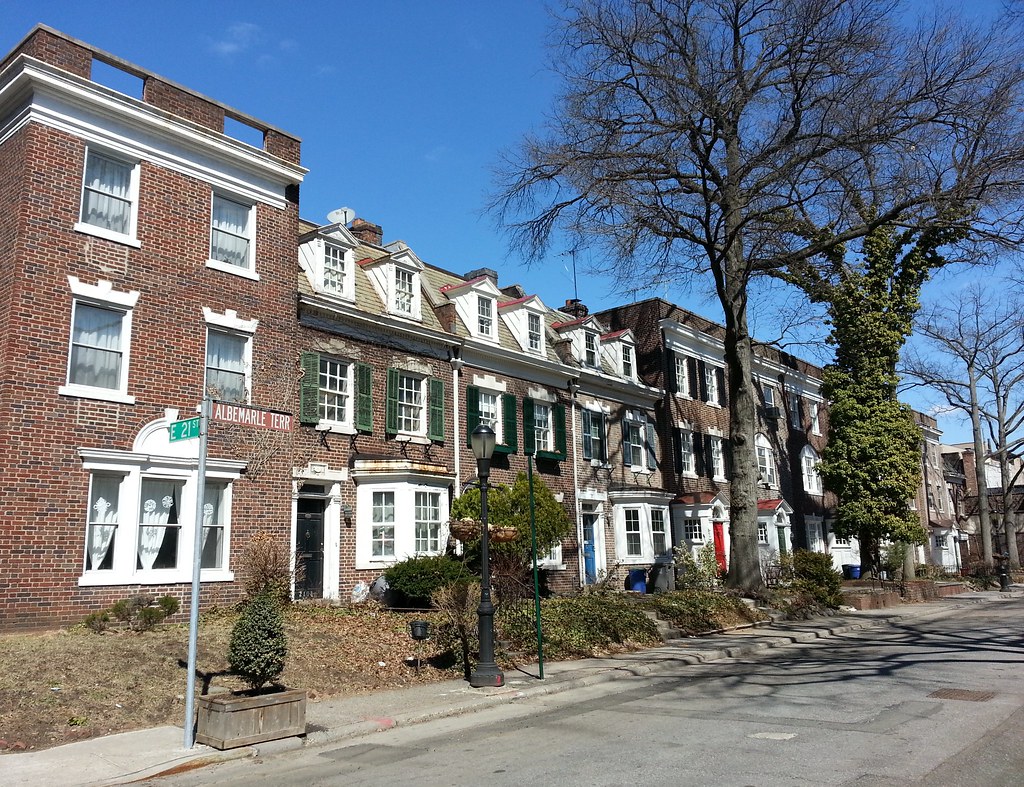 This quaint cul-de-sac (Street View), developed in 1916-17, possesses "a tranquil ambience that offers a refreshing contrast to the crowds, traffic and noise at the nearby intersection of Church and Flatbush Avenues" (Street View).

Realizing that the automobile had become a necessity for the middle class, the architects incorporated garages into the picturesque design of the houses. These two-and-a-half-story houses were among the first to have garages placed in the ground floor and to have the doors fully exposed on the main facade.

* Only the south side and eastern end of Kenmore Terrace were built up, however. The north side is owned by the Flatbush Dutch Reformed Church and is the site of the 1853 parsonage we just saw. 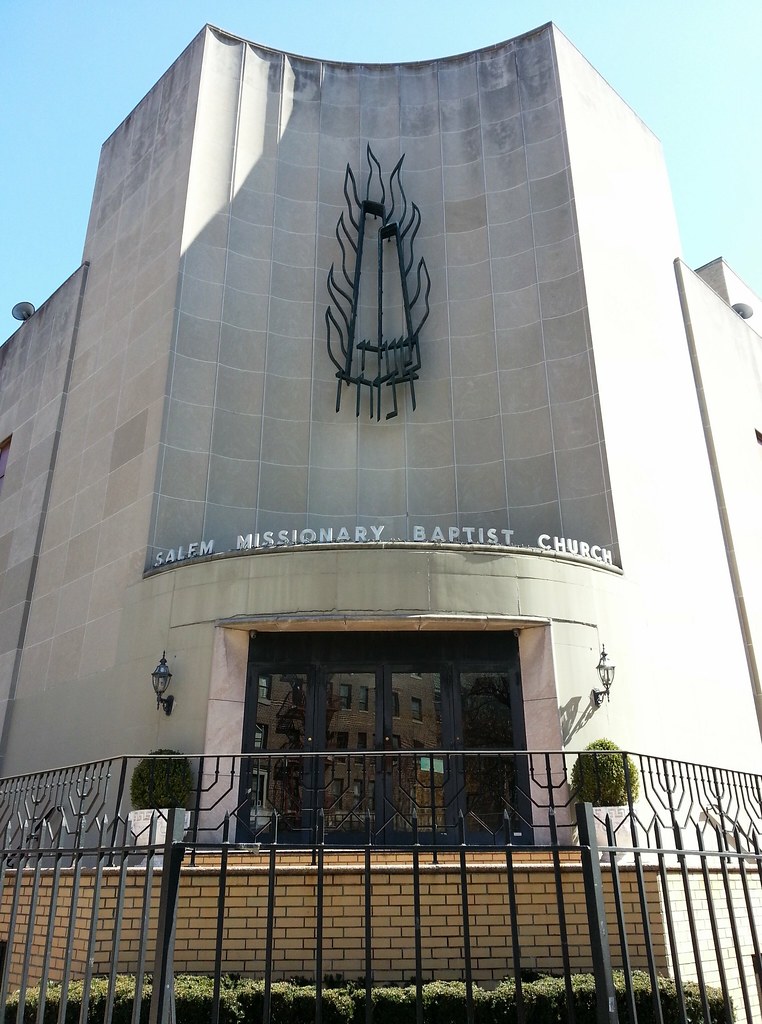 This was the childhood house of worship of Ellen Levitt, Queen of the Churchagogues. Her discovery that it had become a church, while still retaining visible traces of its Jewish past, sparked her interest in the subject:

I have located, photographed, researched, and documented the stories of nearly 280 lost synagogues – buildings that once were shuls, are shuls no longer, yet remain standing. There are many other synagogues that are completely gone, but I have chosen to focus on those whose shells remain.

Why did I pursue this? In April 1999, I decided to see what had become of the synagogue I had attended as a little girl. Once known as Shaare Torah, in Brooklyn’s Flatbush section, it had morphed into the Salem Missionary Baptist Church. I snapped photos of the site, on East 21st Street and Albemarle Road, because it still had Jewish [menorahs] on the front railing. The shul’s name [in Hebrew] was still there, alongside an artistic rendering of the burning bush created by the renowned sculptor Ludwig Wolpert. 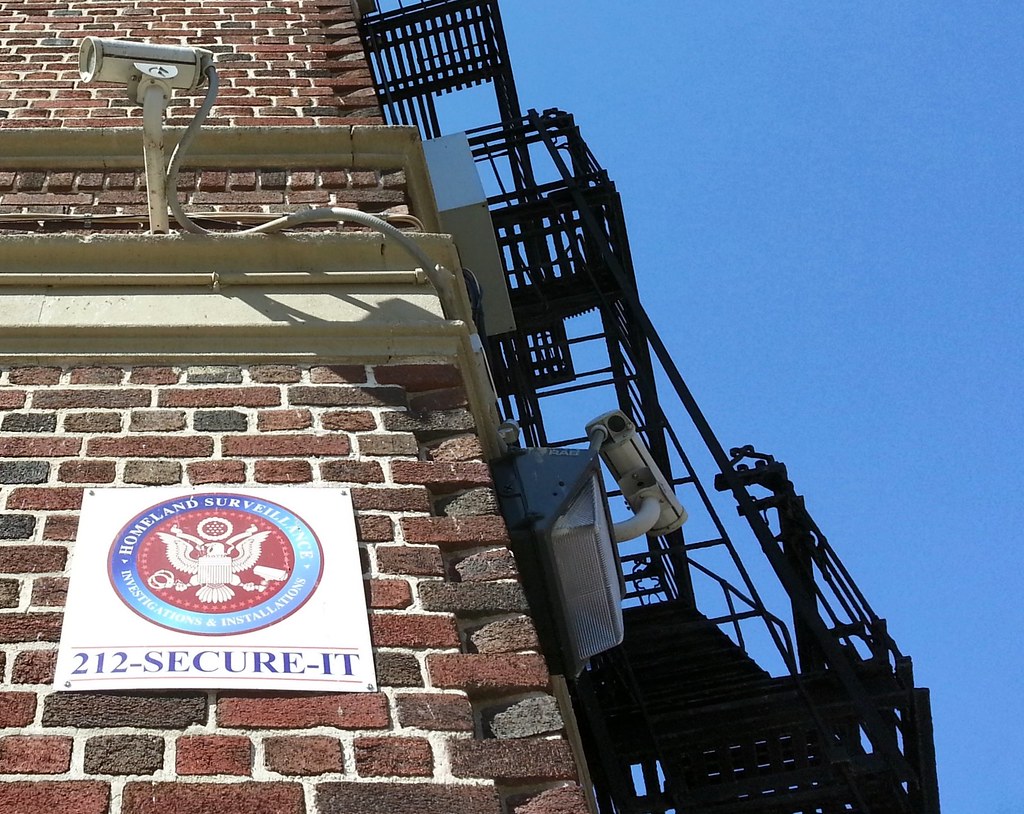 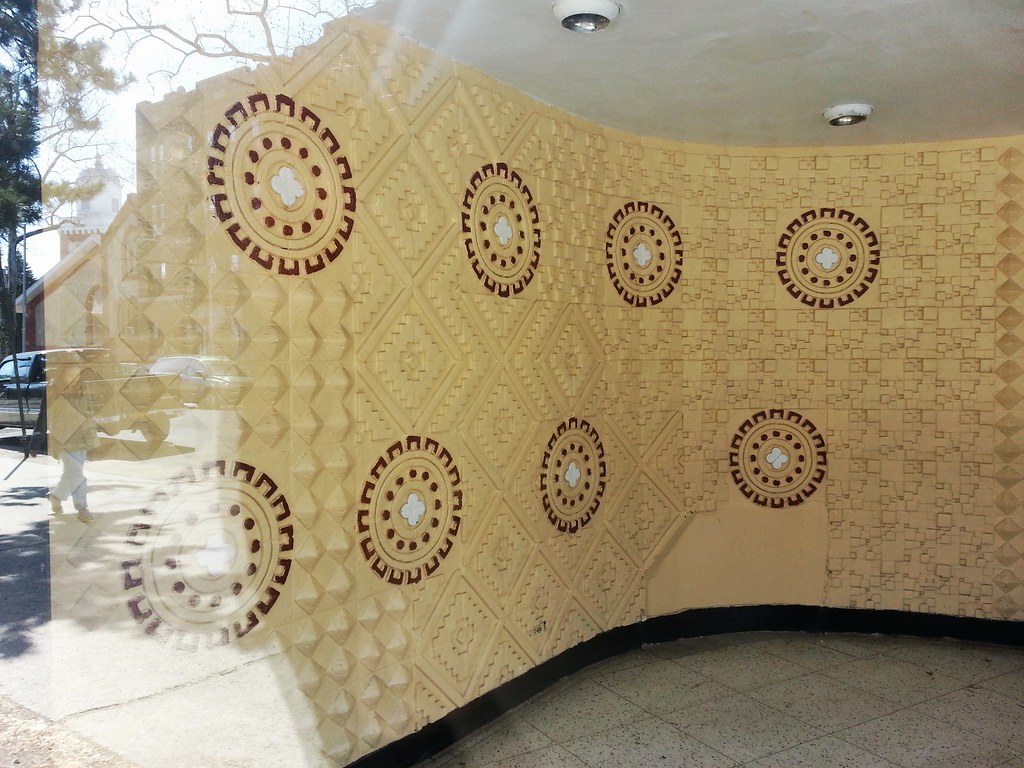 in an externally nondescript apartment building 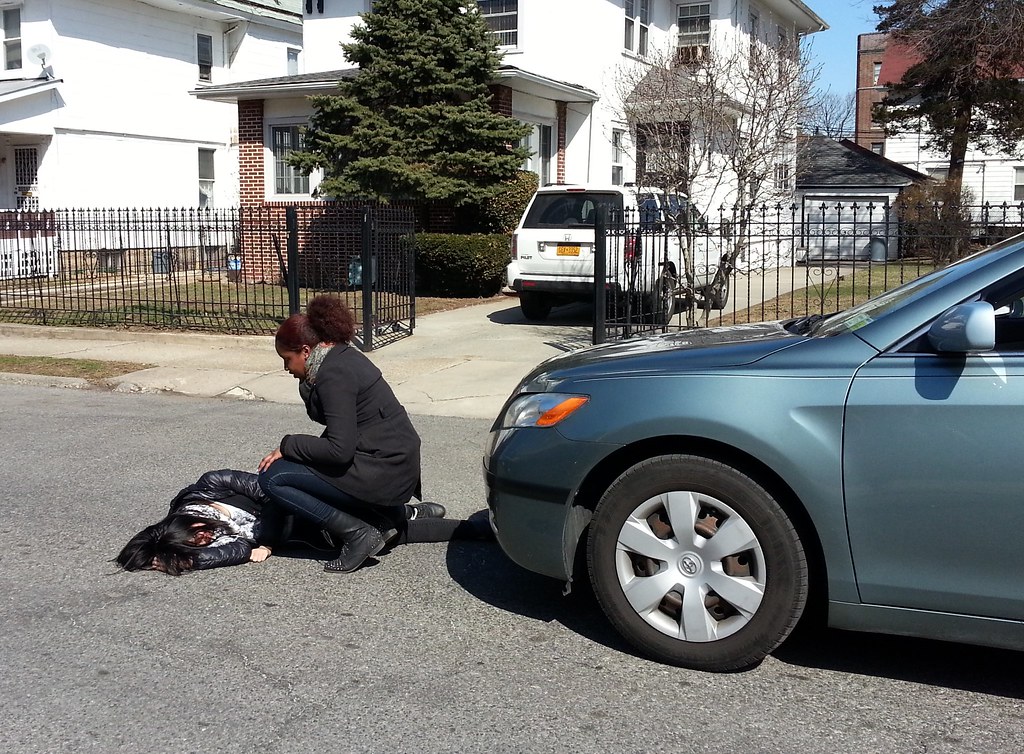 Wow. This is the first time I've seen someone get hit by a car.

Well, "hit" is a strong word. The car was moving about 2 miles per hour and the girl collapsed before it even touched her. The "collision" was staged for a student film, one that was being shot with a small point-and-shoot camera. One girl involved in the filming forgot to put her cell phone on silent and it rang while the camera was rolling. 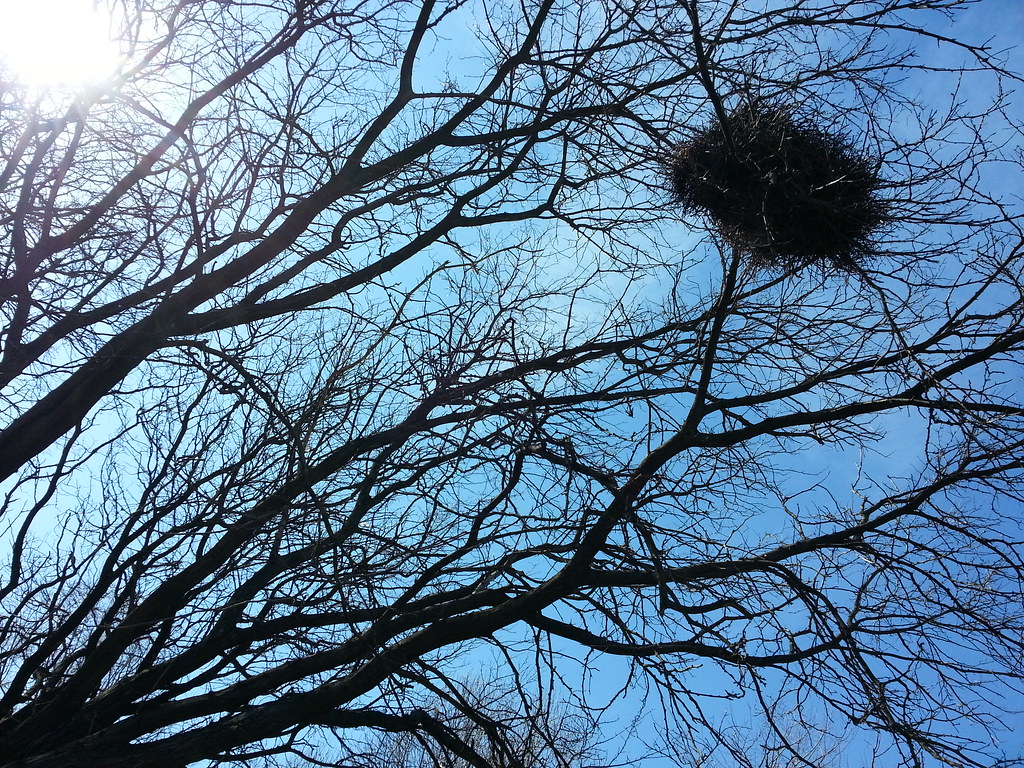 I spotted a couple of nests here on Glenwood Road, just a block from the wild parrot stronghold of Brooklyn College. 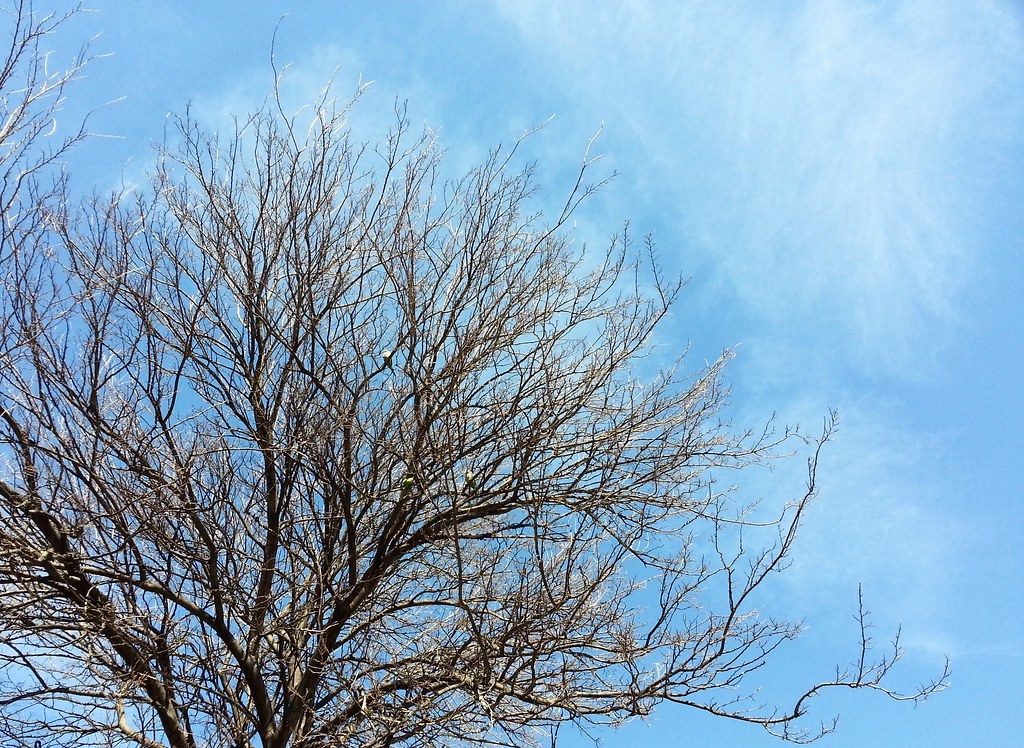 I count three of them. Zoom in for a closer look. 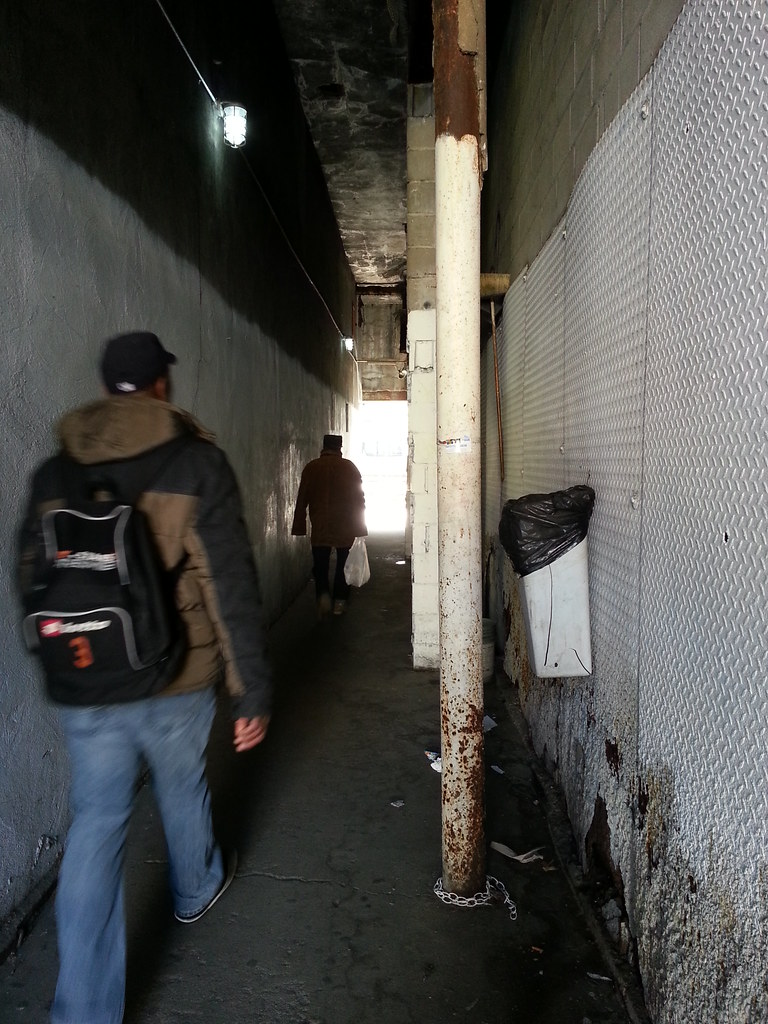 It's well used though, connecting the dead end of East 22nd Street with the storefronts of Flatbush Avenue. 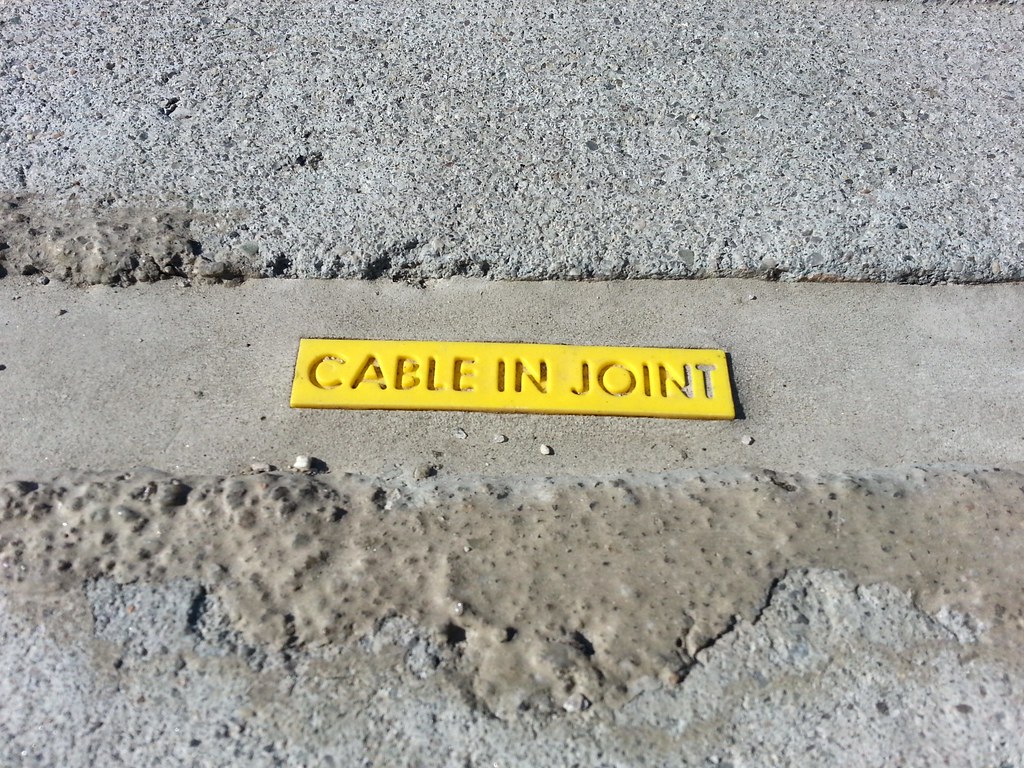 Just letting you know what lies beneath the sealant in this joint separating the sidewalk from a house's concrete walkway. 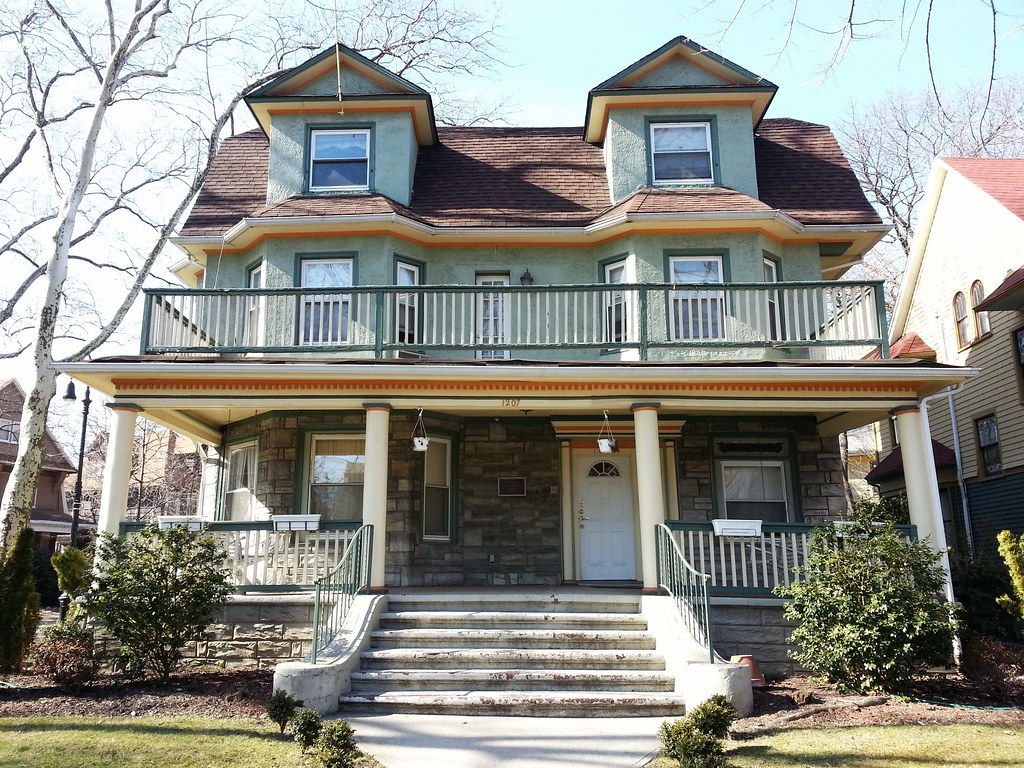 A plaque on the porch identifies this Victorian Flatbush house as the Lillian and Jack Isaacson Residence, operated by AHRC (formerly known as the Association for the Help of Retarded Children). 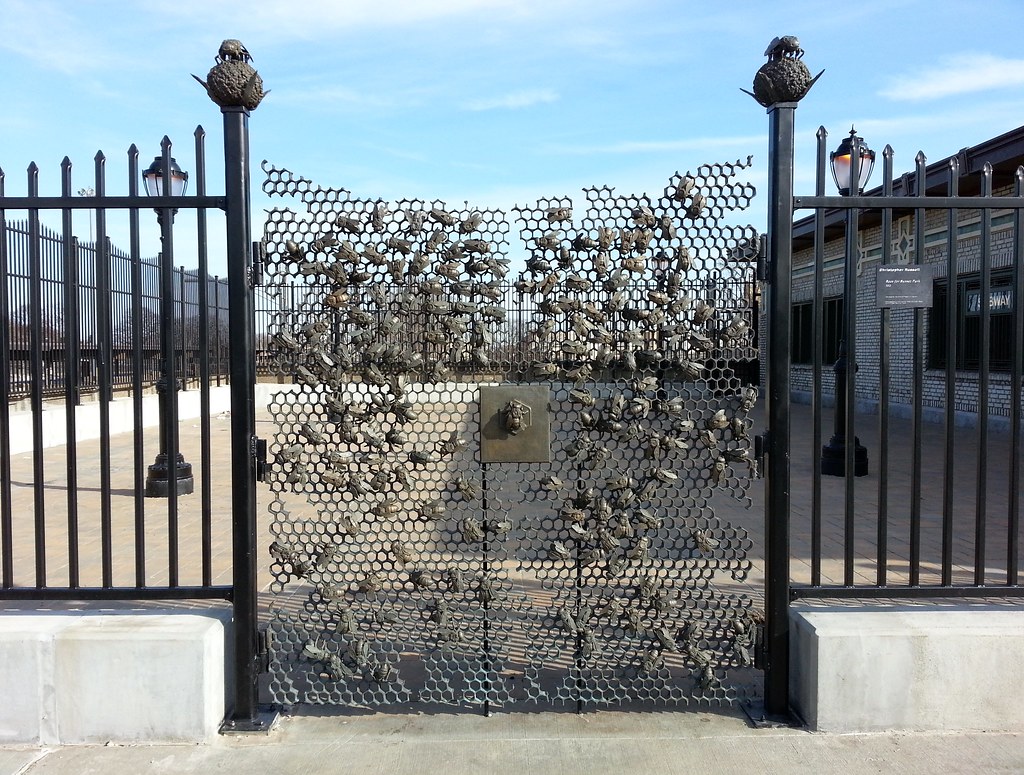 That's the name of this artwork outside the Ninth Avenue D train station in Brooklyn. 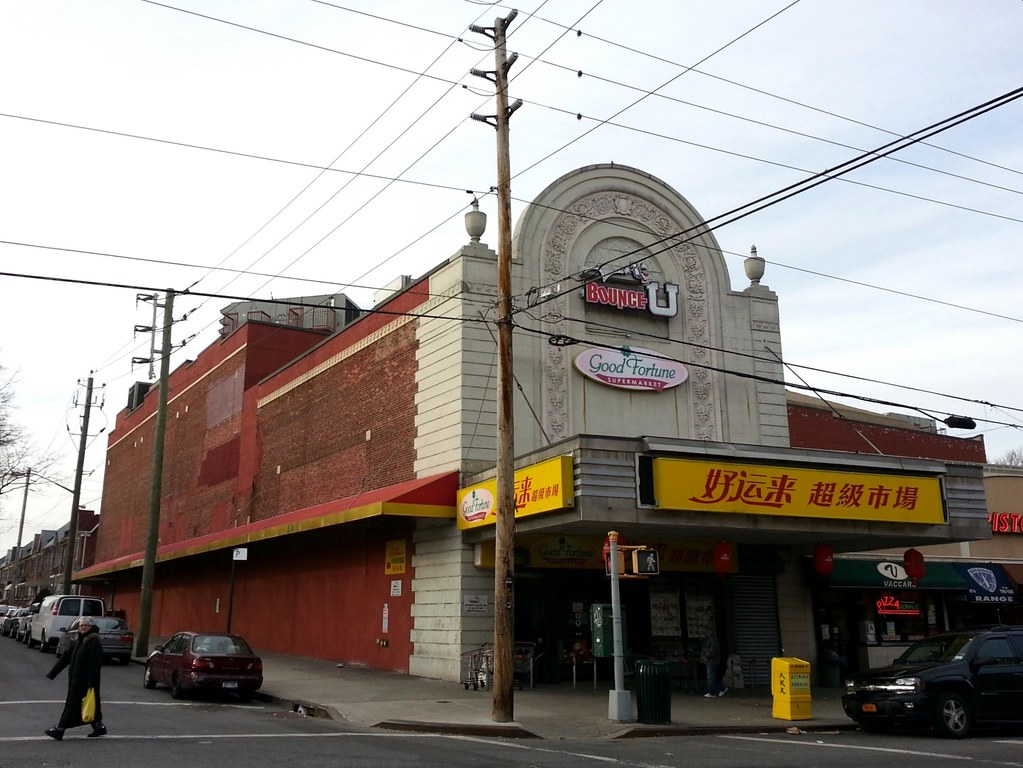 GLORY TO THE BLOOD OF JESUS 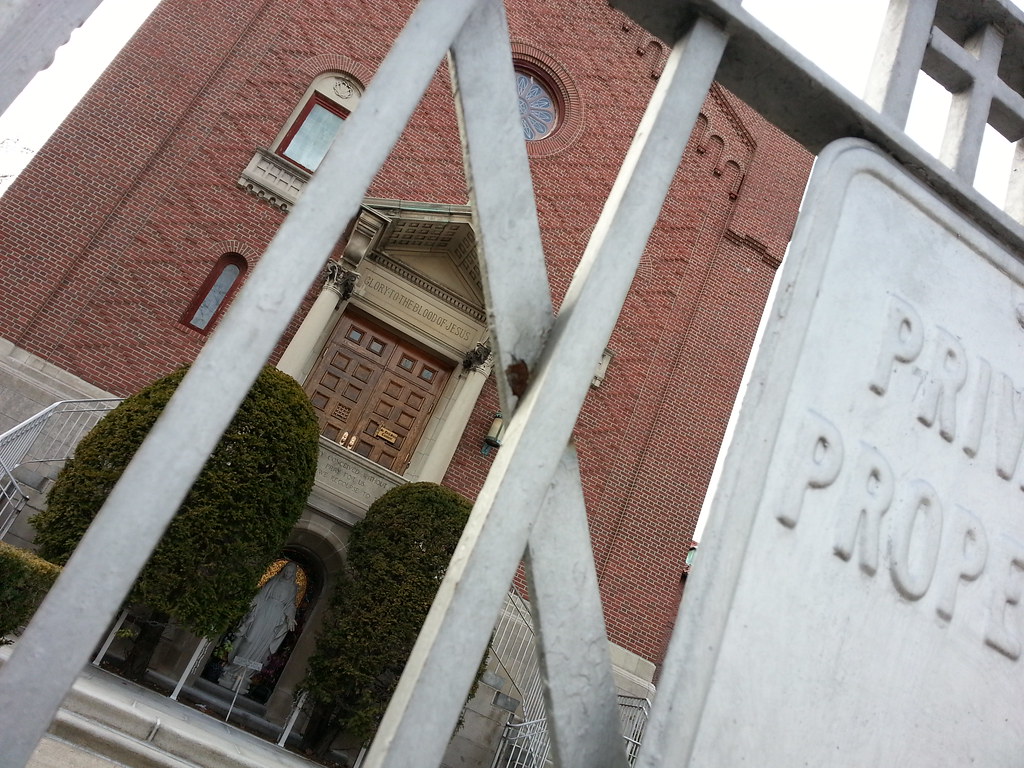 The Monastery of the Precious Blood. Here's a wider shot, and here are some interior photos. 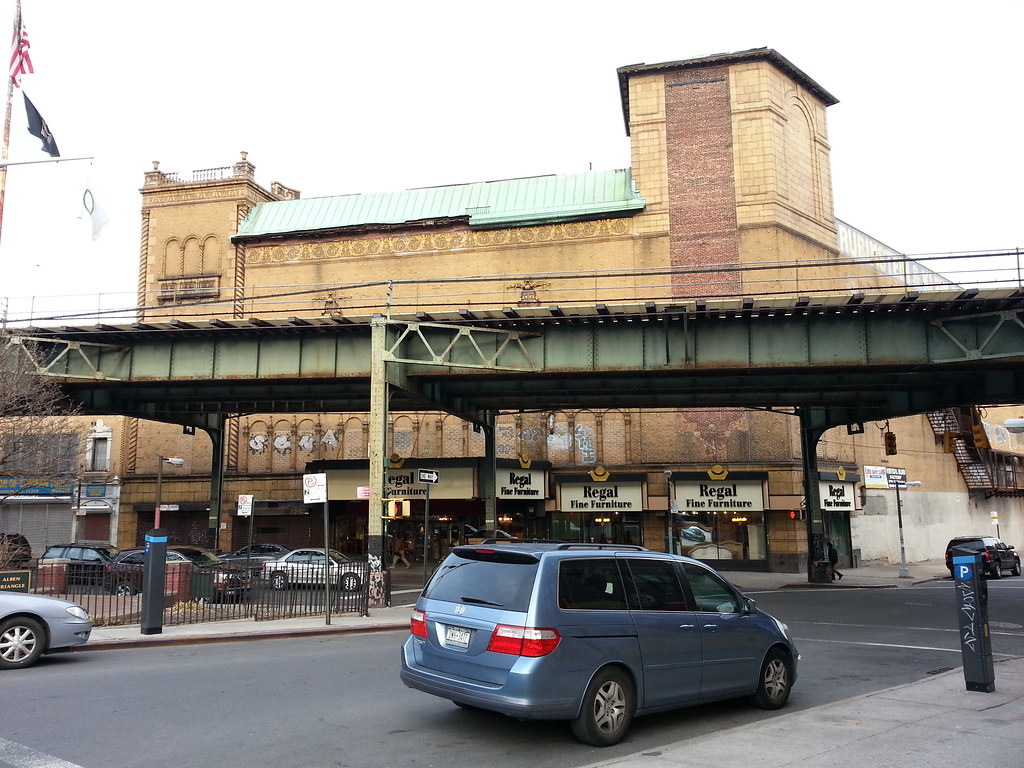 When this former movie and vaudeville palace opened as the Universal Theater in 1927, it was "said to be the first atmospheric theater in New York City", according to an account in the Brooklyn Daily Eagle, which also reported that "an unruly mob of more than 25,000 persons attempted to 'crash the gate' at the grand opening":

Shortly after 6 o'clock several thousand fans had already taken up positions in front of the theater, and before another hour had passed many more thousands had swarmed in the vicinity of the new palace, forming an unbroken line of humanity for several blocks around.

When those in the rear realized that they had no chance of getting in except by bettering their positions, a veritable raid was made on the entrance, and a panic was only averted by the quick action of the management in throwing the theater open to the public long in advance of the scheduled hour. A temporary wooden barricade placed in front of the entrance and supported by the combined efforts of employees and a cordon of police, who were powerless to stem the human tide, was beginning to splinter and give way under the crush when the management stepped in and relieved the situation.

No sooner had the support been removed from the wooden barricade than it was bowled over by the surging mob, which rushed the door and hurtled its way into the richly appointed place, which in a moment's time took on the appearance of an overcrowded stockyard. In less than three minutes nearly 4,000 persons had shoehorned their way into the house, which has a seating capacity of 3,000 . . .

During an address made from the stage during the show [Borough President] Byrne requested the crowd, practically all of whom had done a "One-Eyed Connolly," to reimburse the management as they filed out.

In case you're wondering, One-Eyed Connolly (or Connelly) was "the world's greatest gate crasher", a man who "lived most of his life in a strange world, partly in hobo jungles, partly on the fringe, however tawdry, of the glamorous and the famous. Almost always he was in the center of excitement." The schemes he used to sneak into the marquee events of his day were often quite brilliant. For example:

Wanting to see Red Grange play at Illinois, Connelly disdained the tickets the star offered. Instead, about game time, he appeared in overalls carrying a paint bucket and calmly started painting parking lines on the street. When he had finished, he went up to a gate tender and asked, "What else do I paint?" "Don't ask me, go in and ask the boss," said the gate tender.

A former boxer himself (which is how he came to be one-eyed), Connolly wanted to see the Jack Johnson-Tommy Burns heavyweight title fight in Sydney in 1908. He actually had to pay to get to Australia, exhausting the savings he had accumulated as a newspaper vendor. Once there, however, he walked into the stadium for free in the guise of a fireman (wearing a helmet he had just stolen) and watched Johnson defeat Burns to become the first black heavyweight champion of the world. But how would Connolly make it back to the States with no money?

Getting home for free was simple. In one of Sydney's principal theaters, which Connelly crashed, the crowd started to sing "God Save the King." Connelly howled derision and insults. The Australian police took him before a magistrate, where he made a fiery speech identifying himself as an American Communist. Australia forthwith deported him to the United States.

But enough about ol' One-Eyed. Less than a year after that mob scene at the opening of the Universal, the theater was acquired by Loew's and reopened as the Loew's 46th Street. It would continue operating under that name for almost four decades before becoming an independent theater for a few years in the late '60s and then a rock concert hall for a few more in the early '70s.

During its time as a rock venue, the theater was known as the 46th Street Rock Palace, and then later as the Bananafish Garden, a name likely taken from J.D. Salinger's short story A Perfect Day for Bananafish. It's hard to imagine such a place existing in decidedly unhip Borough Park, but some big-name acts played here in those days (though not necessarily at the height of their big-namedness), including the Byrds, the Grateful Dead, and Jerry Lee Lewis. Here's a clip of a Mahavishnu Orchestra show at the Bananafish in 1973.

Since the mid-'70s, the theater has been home to a furniture store, with the lobby turned into a showroom and the auditorium used for storage. You can find a few shots of the lobby/showroom here, and be sure to check out these beautiful photos of the auditorium in its current state — deteriorating but still pretty magnificent. 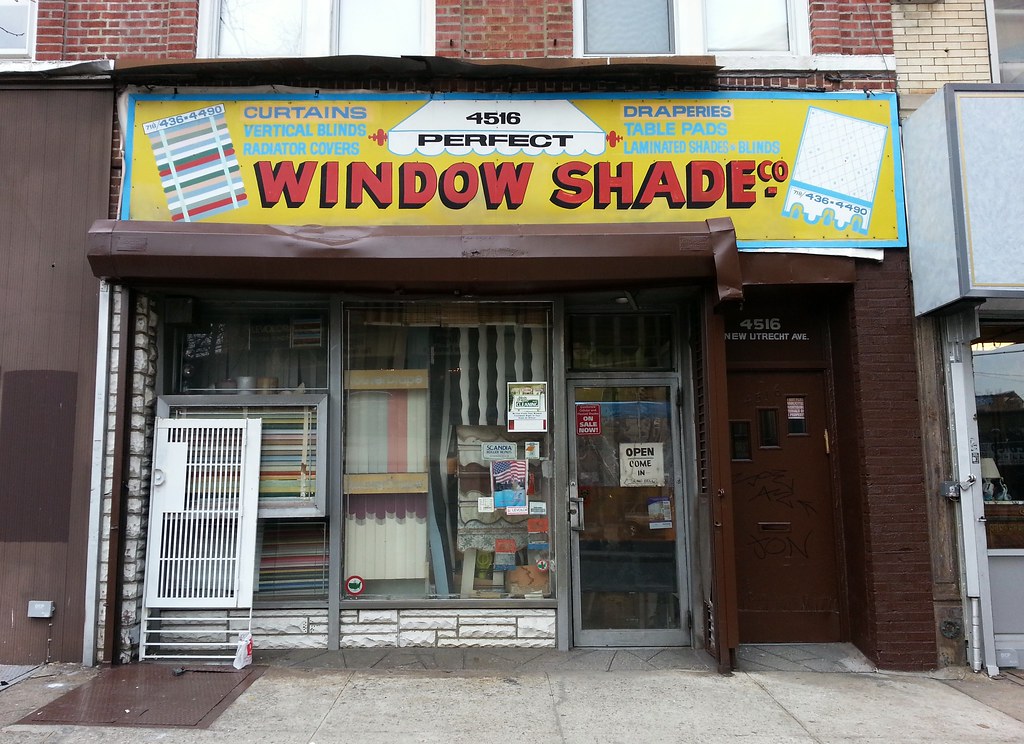 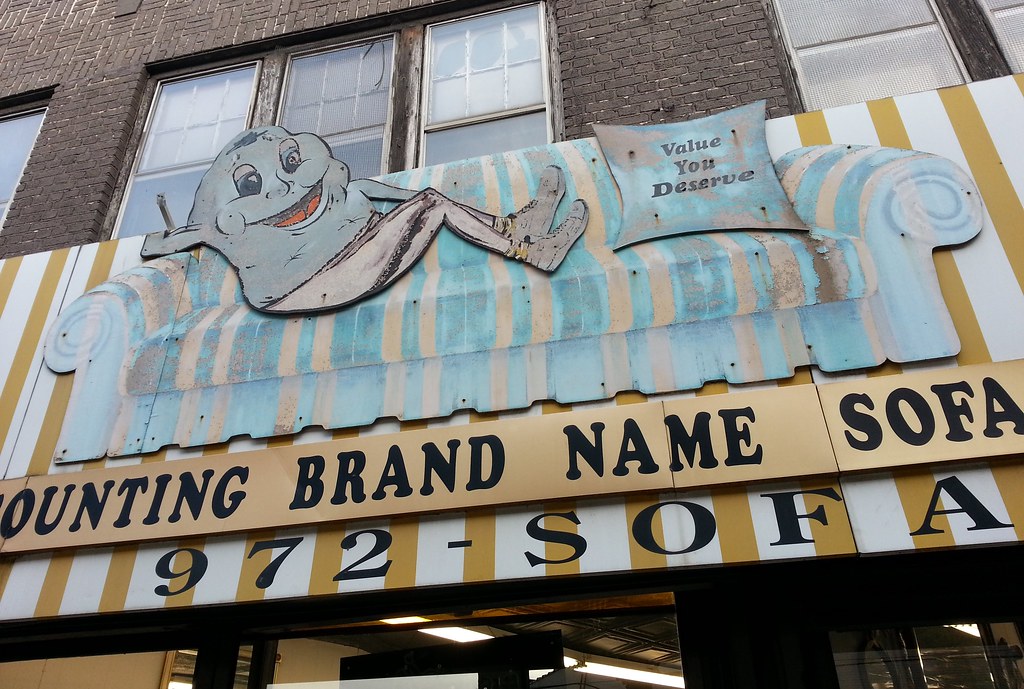 There was once a time when this grimy tuber could be seen brightening everyone's day with a cheery thumbs-up sign, but then he lost his right arm in a presumably tragic accident sometime in the past few years. A Hasidic guy walking by saw me admiring the sign and told me he designed it some twenty years ago. 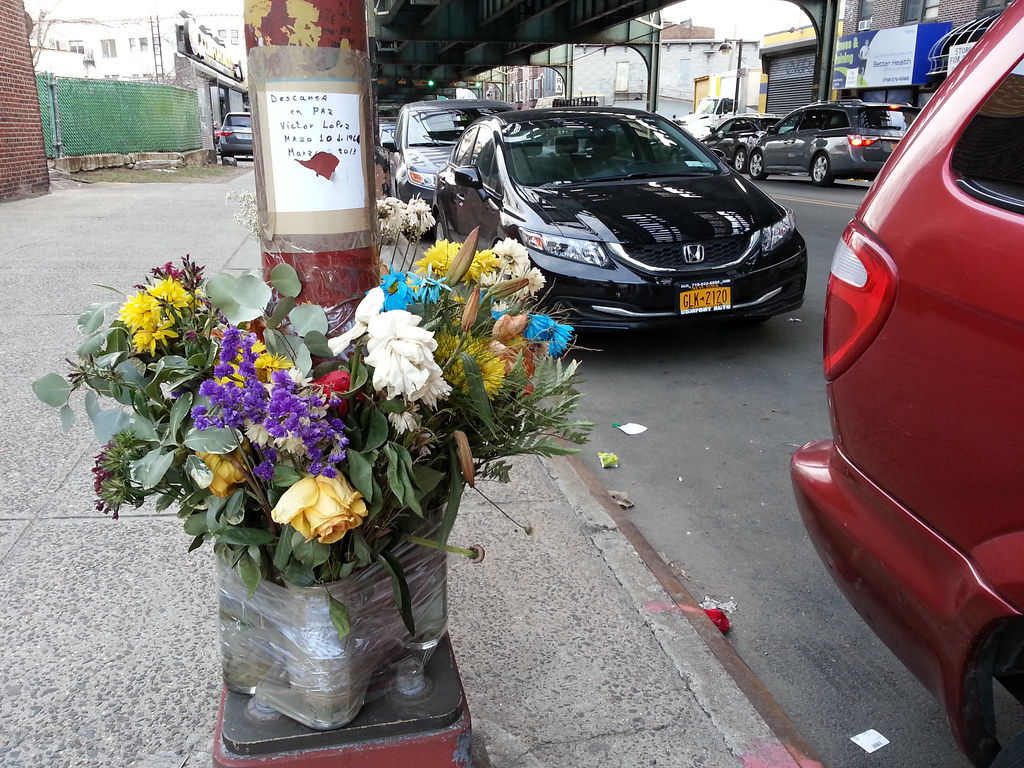 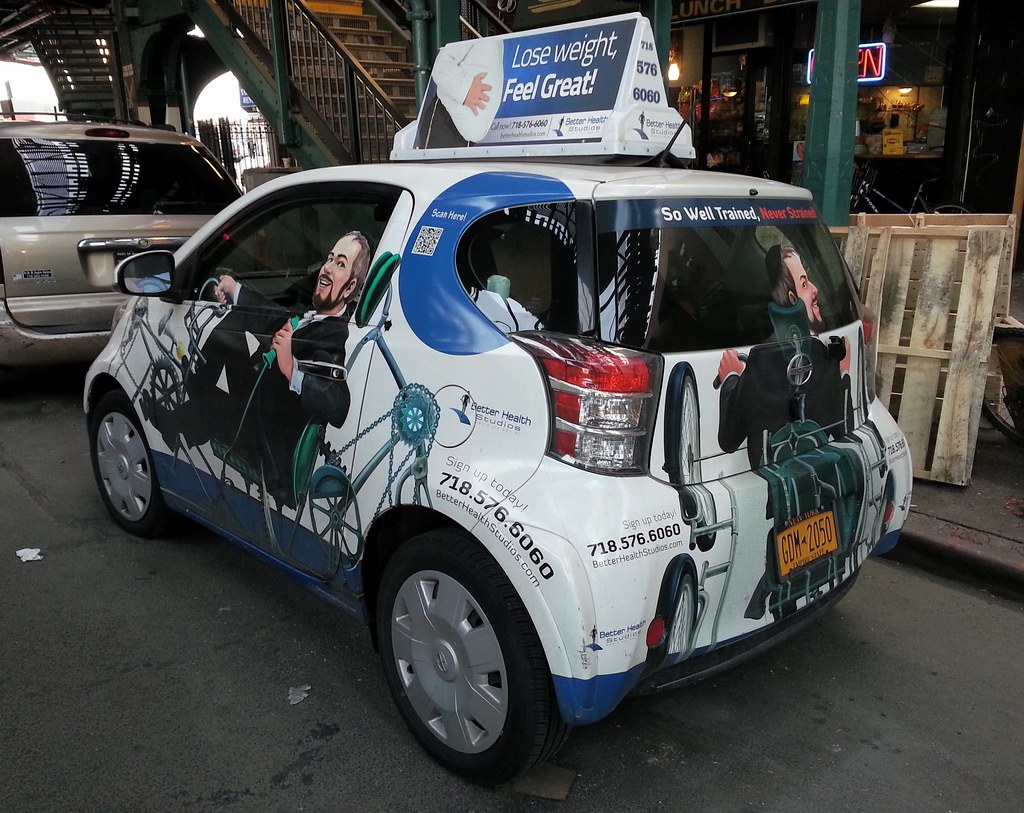 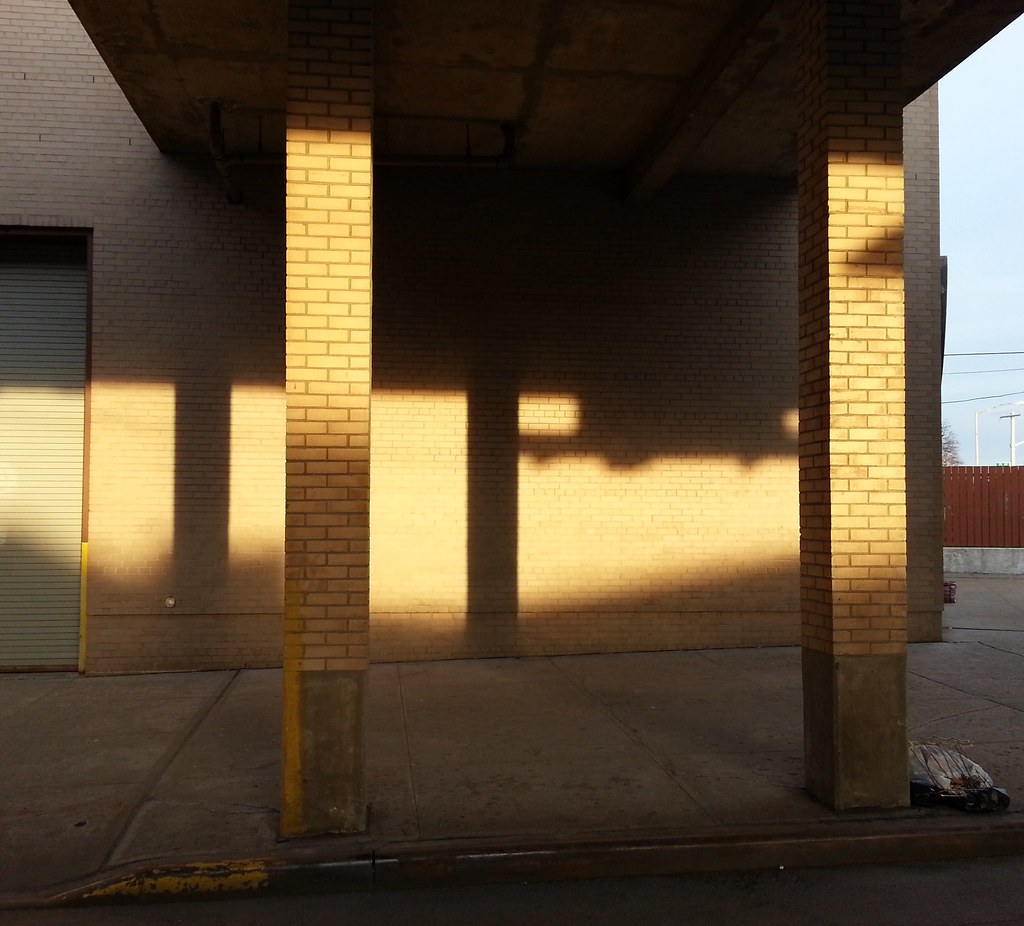