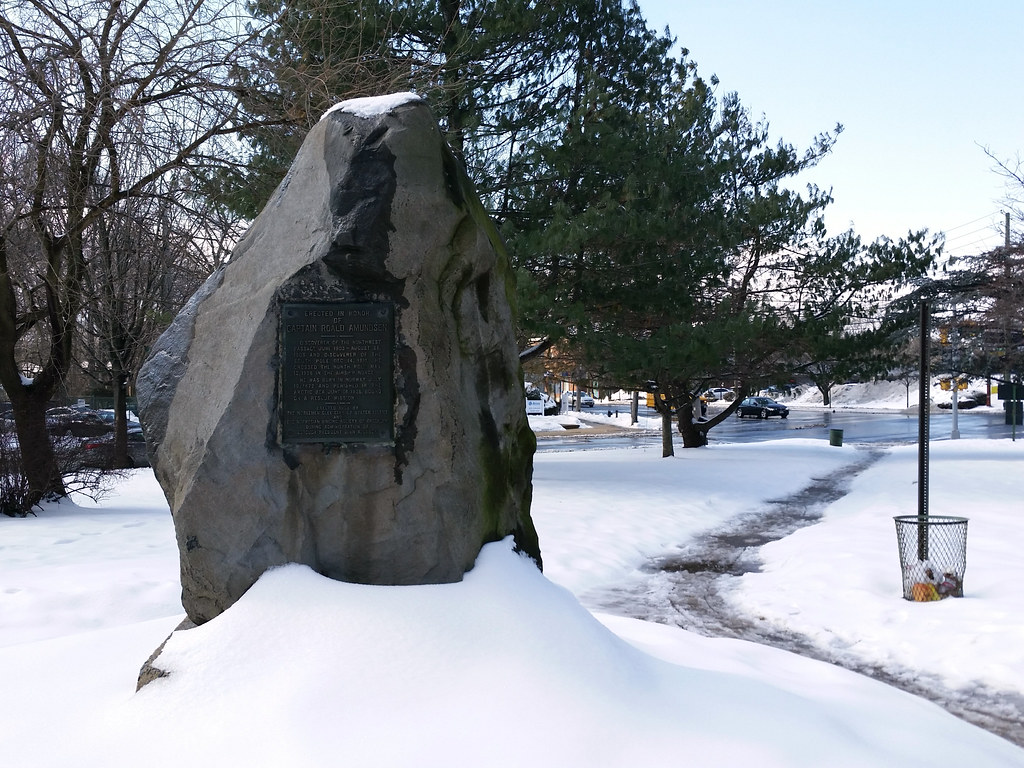 The plaque on this formerly overgrown stone monument reads: 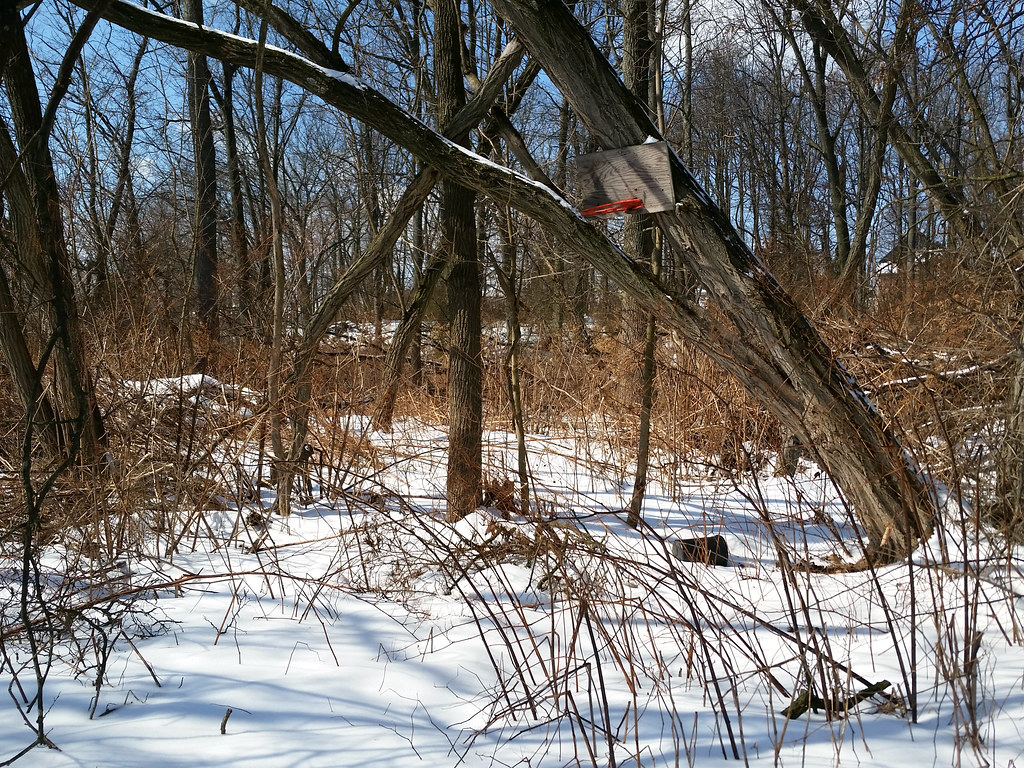 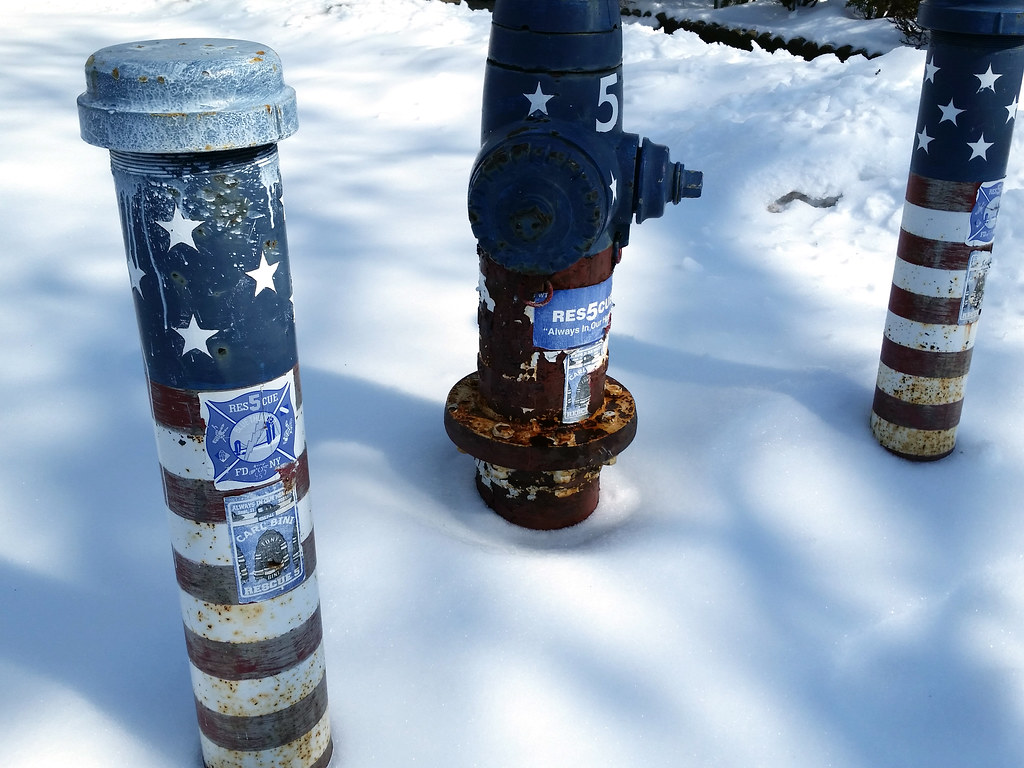 The stickers (close-up) commemorate the lives of Carl Bini and the ten other members of FDNY Rescue Company 5 who died on 9/11. 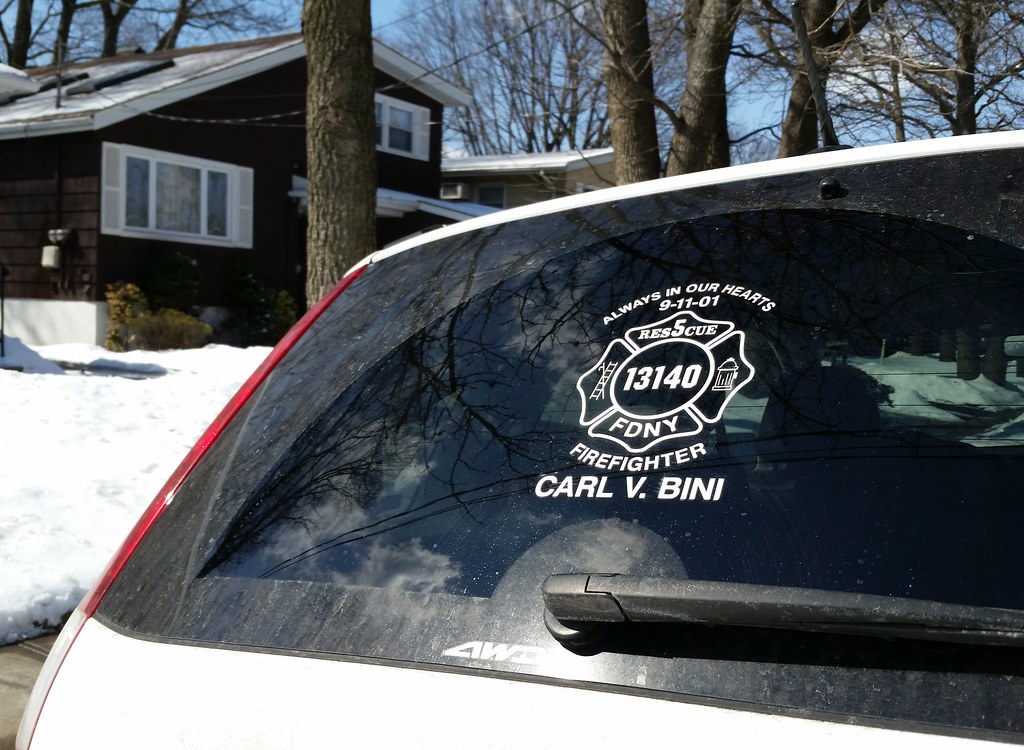 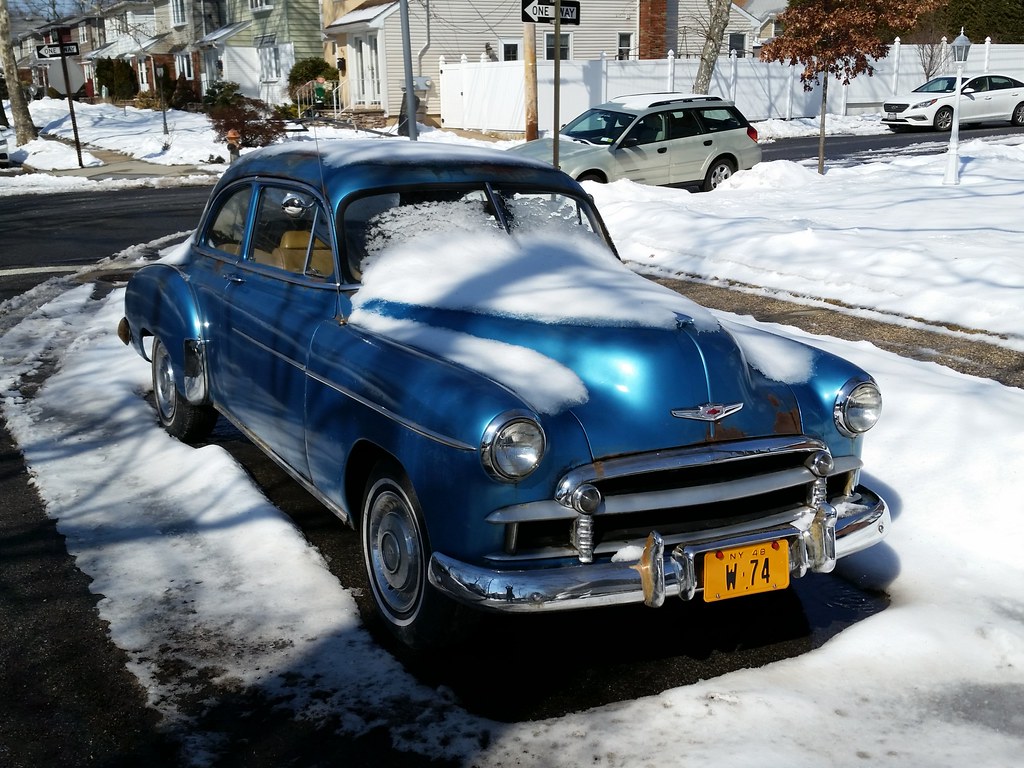 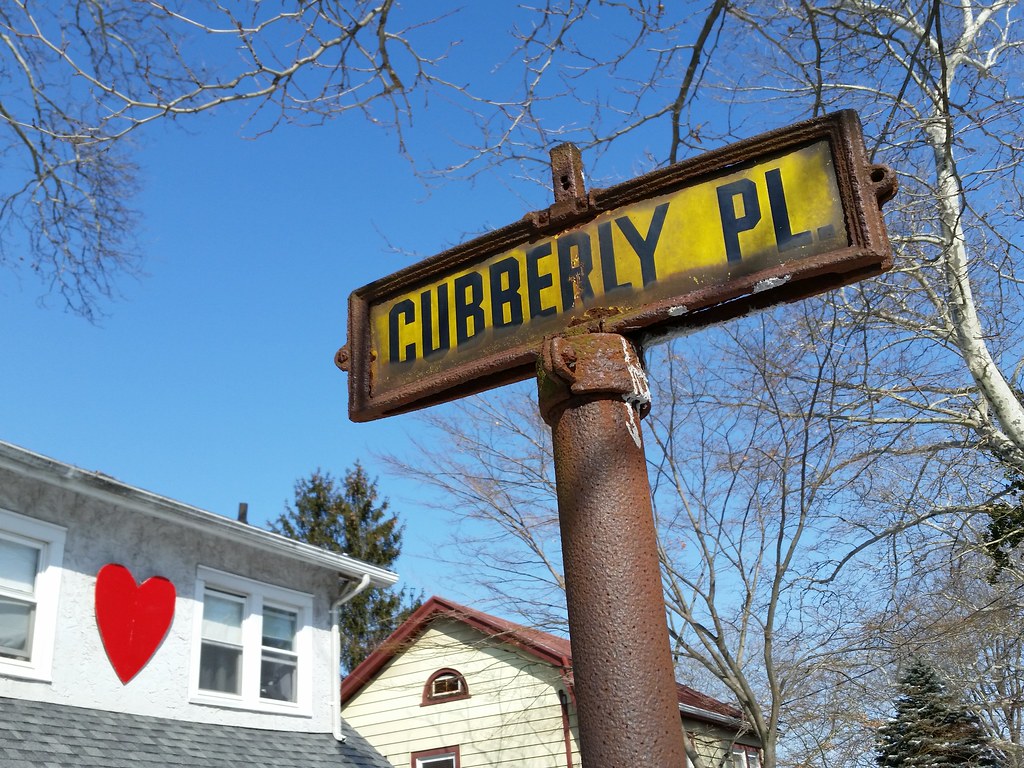 According to Kevin Walsh of Forgotten New York, this street sign probably dates back to the 1940s, and the only thing preventing the DOT from removing it is its location just inside the sidewalk on private property. Mr. Walsh is aware of only two other pre-1964 street signs left in Staten Island; they mark the intersection of Richmond Road and Court Place in Historic Richmond Town. 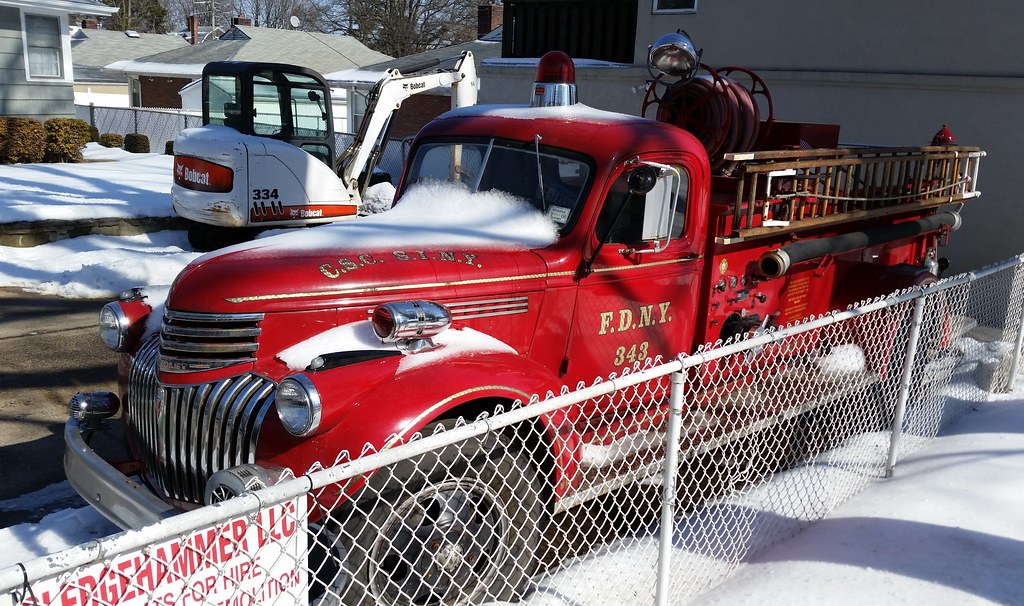 This 1946 Chevrolet fire truck is dedicated to the 343 members of the FDNY who died on 9/11. It also honors the truck owner's father, John Cavendish, a retired firefighter who spent six months working at ground zero. 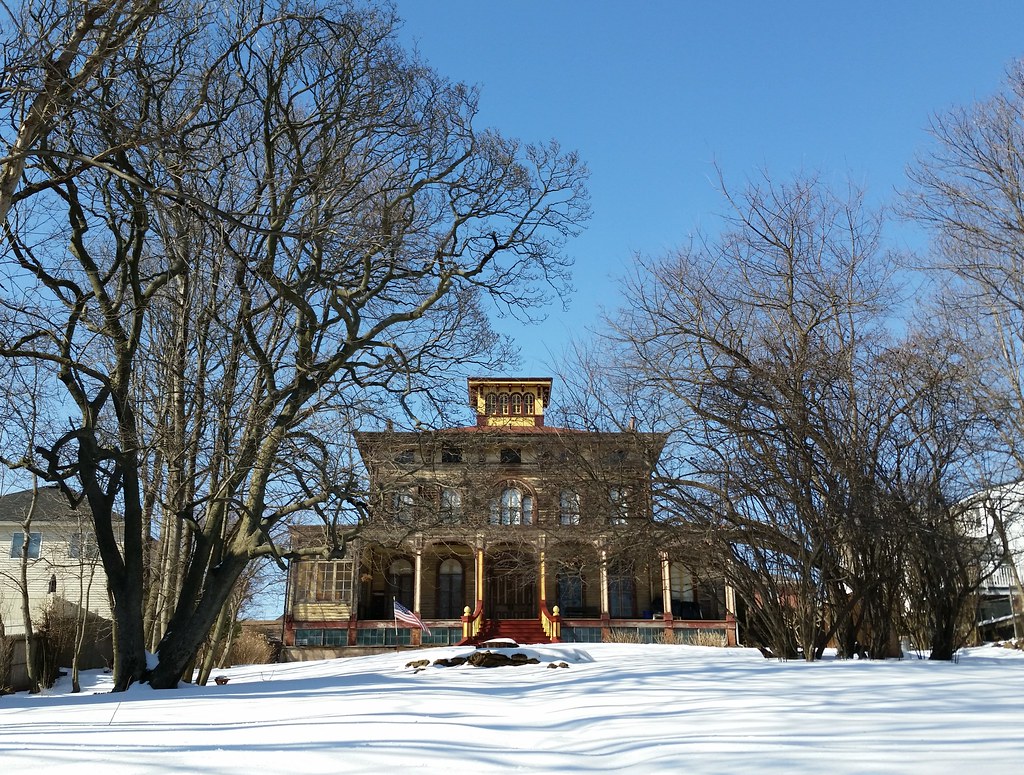 The stars Mary-Kate Olsen and Lauren Hutton are laughing on a beat-up couch in their Harper’s Bazaar shoot, dressed for a bohemian ball, the plaster walls behind them cracked and humming in the afternoon light. In a Cosmopolitan U.K. spread, the model Megan McNierney totters down the stairs past a fresco of the Italian countryside, a Hitchcockian madman in pursuit. For a Vs. magazine feature, the actress Amber Heard reclines in a claw foot tub, wearing leather, lace, a commandant’s hat and knee-high boots, a riding crop clutched with menace in her hands.

All were shot in the same house, a favorite of photographers, editors and directors around the globe. With its chipped paint, marble fireplaces, rolling grounds and airy cupola, the home seems to be from another time and place. . . .

The 7,700-square-foot Italianate house, a New York City landmark, has been called Staten Island’s Grey Gardens, and not just for its appearance. It was built in 1855[-56] by David Ryers, a commander in the New York militia, and sold in 1889 to Gustav Mayer, a German confectioner whose Stapleton business was among the 114 founding bakeries of Nabisco.

For a century, his daughters Paula and Emilie Mayer, and few others, called 2475 Richmond Road home. The Mayer women never married — no man was ever good enough for their father.

The sisters found great joy in the house instead, with Paula painting frescoes from their travels on the walls, though in later years, they never went out, lowering baskets from the window to collect groceries, mail and laundry. By the time they moved out with their nurse in the 1980s, the sisters, who both lived to be more than 100, had confined themselves to two second-floor bedrooms, this inside a house with more than 20 rooms on four floors, five counting the cupola with views of Raritan Bay.

You can read the rest of the article here, and see many more photos here. For more detailed information about the house, check out its 1989 landmark designation report.

Mansion on the market 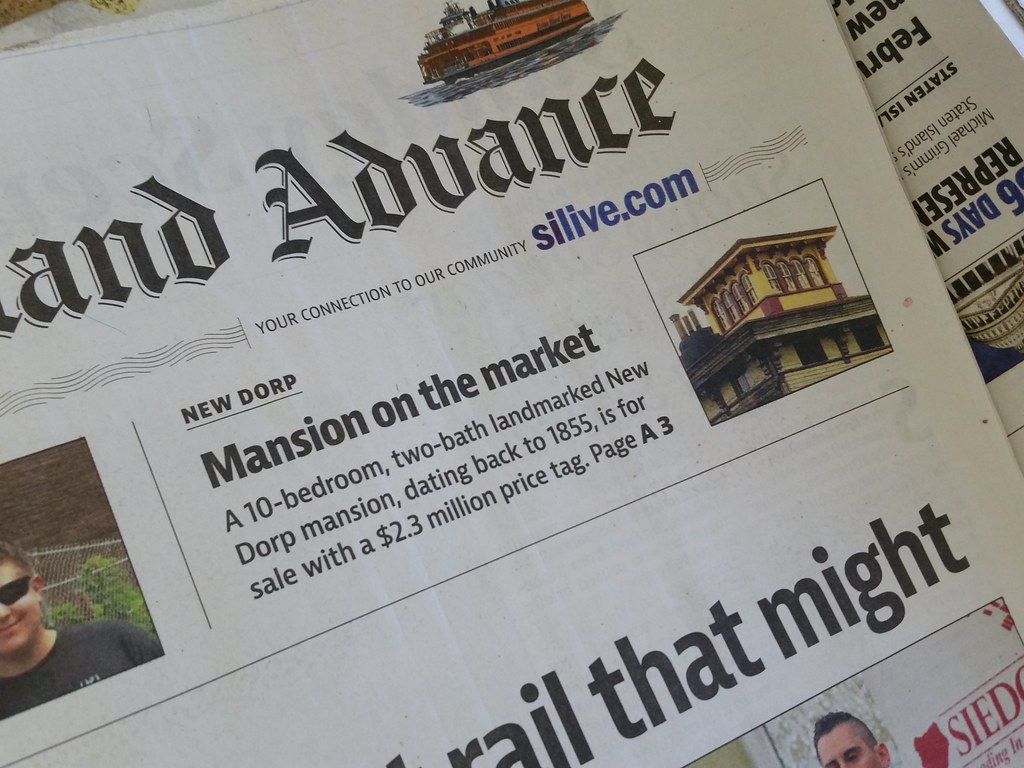 Ten minutes after I took the previous photo, I walked into a deli and saw this headline. 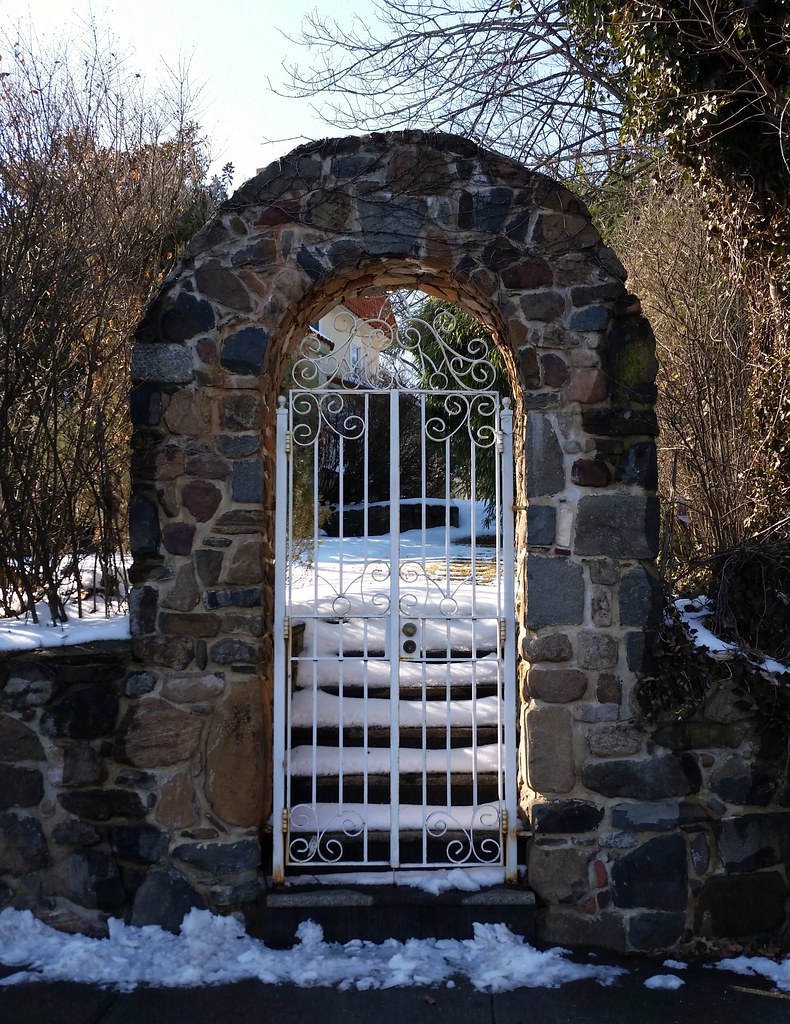 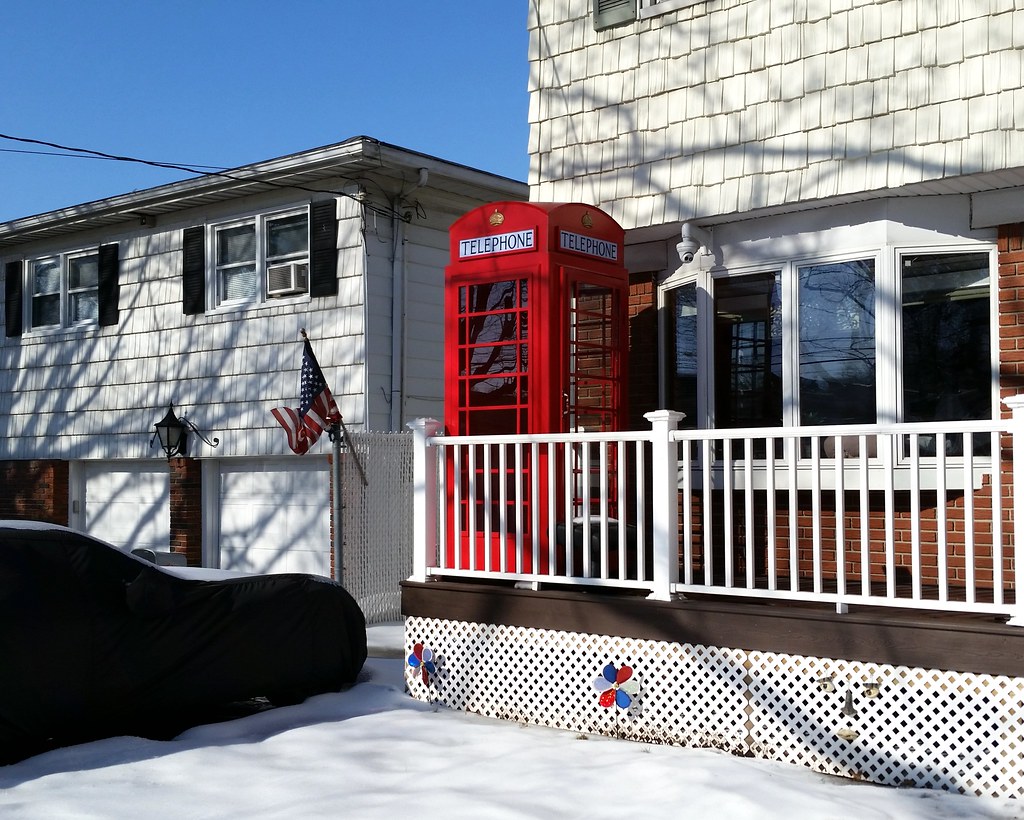 Looks like another K6, in much better condition than the last one we saw. 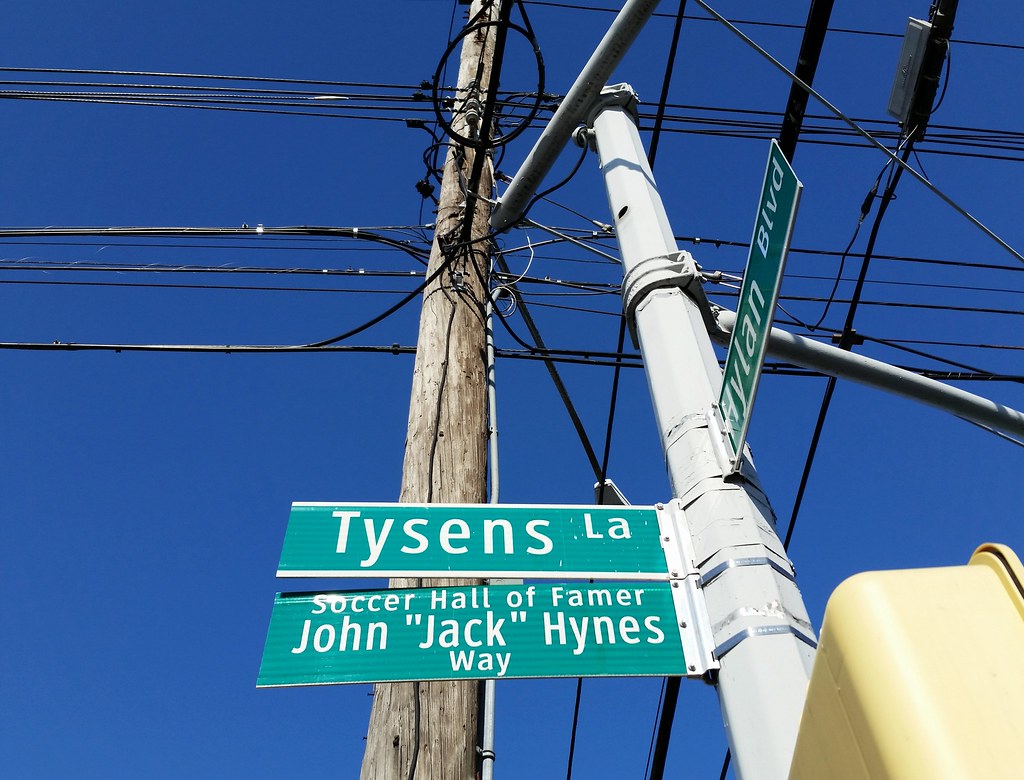 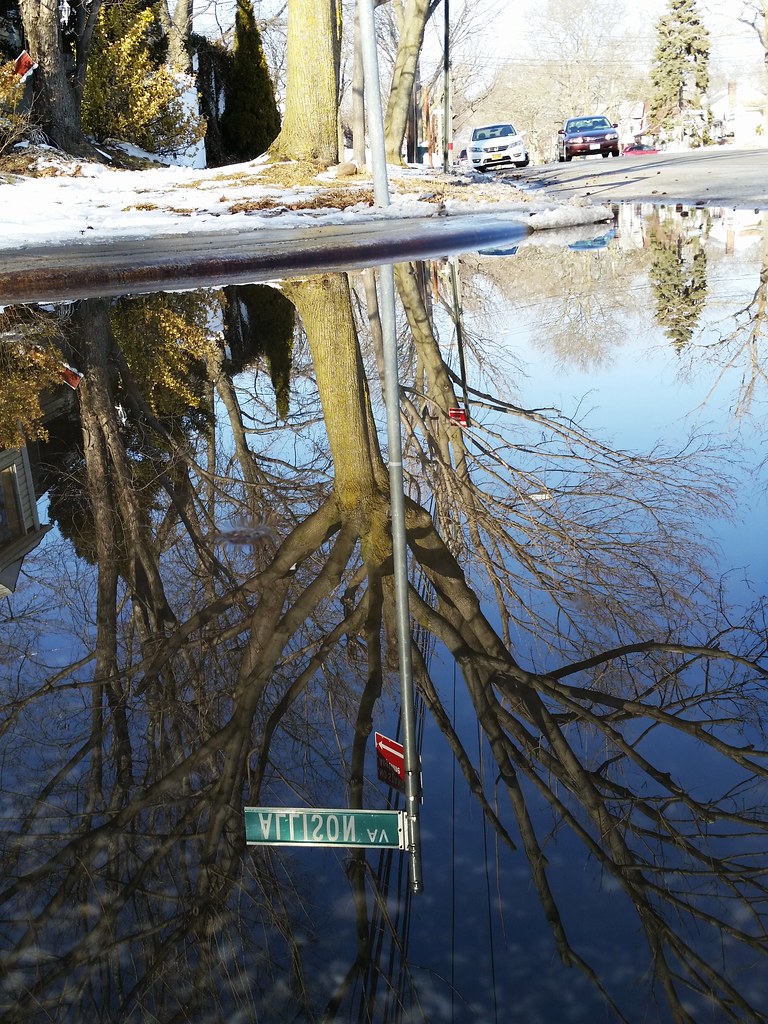 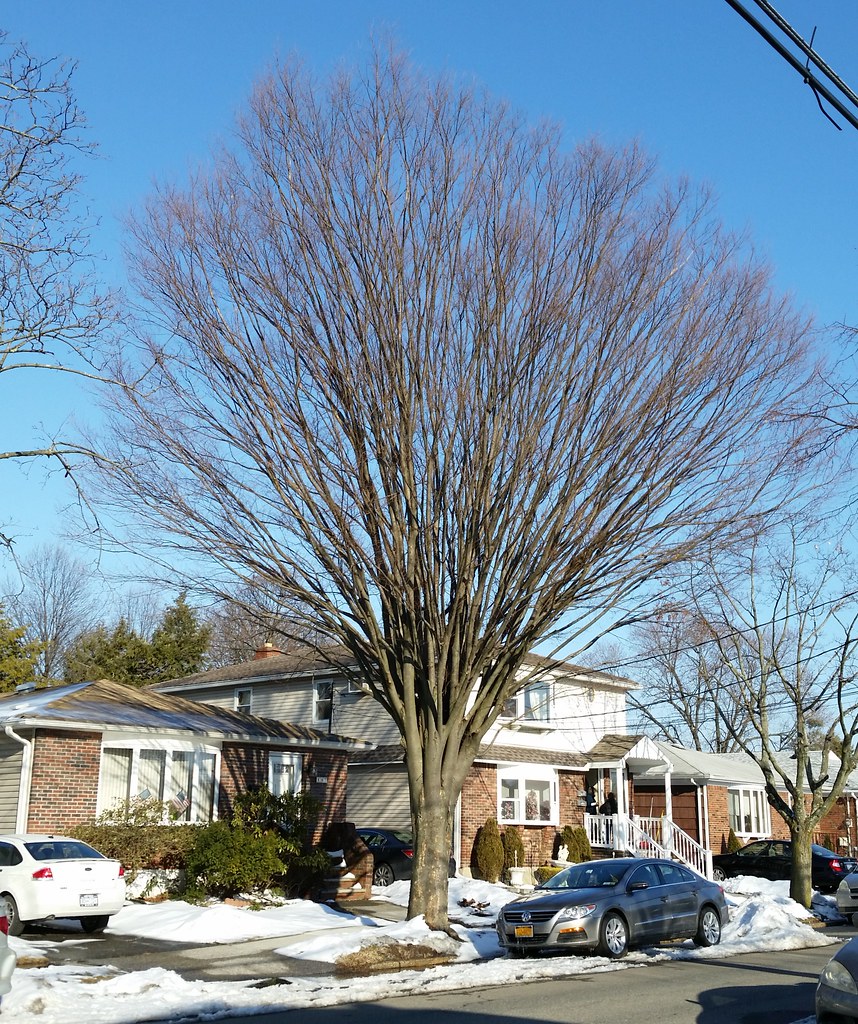 Zelkova serrata, I believe. You can take a closer look in Street View. 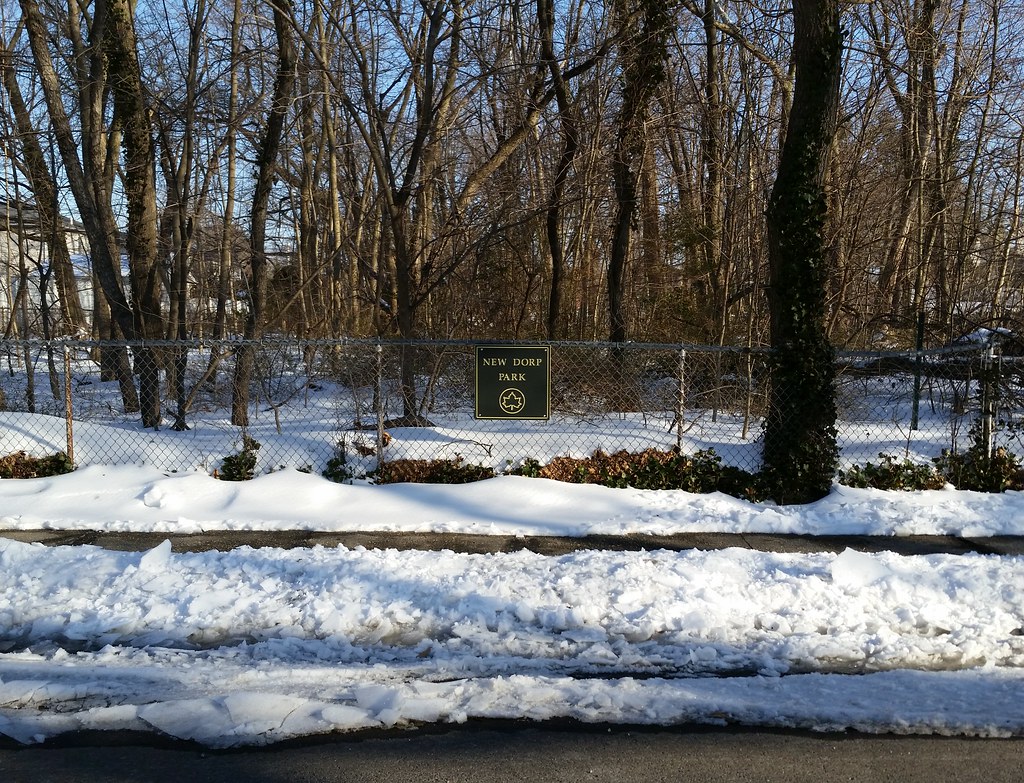 When Parks acquired this land on 8th Street between Allison and Beach Avenues in 1970, the property was overgrown and filled with junk piles. The small plot had been in the public domain since P.S. 9 was built here in 1894. In the intervening years, the land housed various public institutions and in 1963 was home to a police precinct. Although there was a need for recreational space, New Dorp residents resisted the idea of a public park. They were concerned that the .7 acre [park] would attract drug dealers. As a compromise, Parks agreed to plant trees, creating a fenced-in woodland area with no public access. 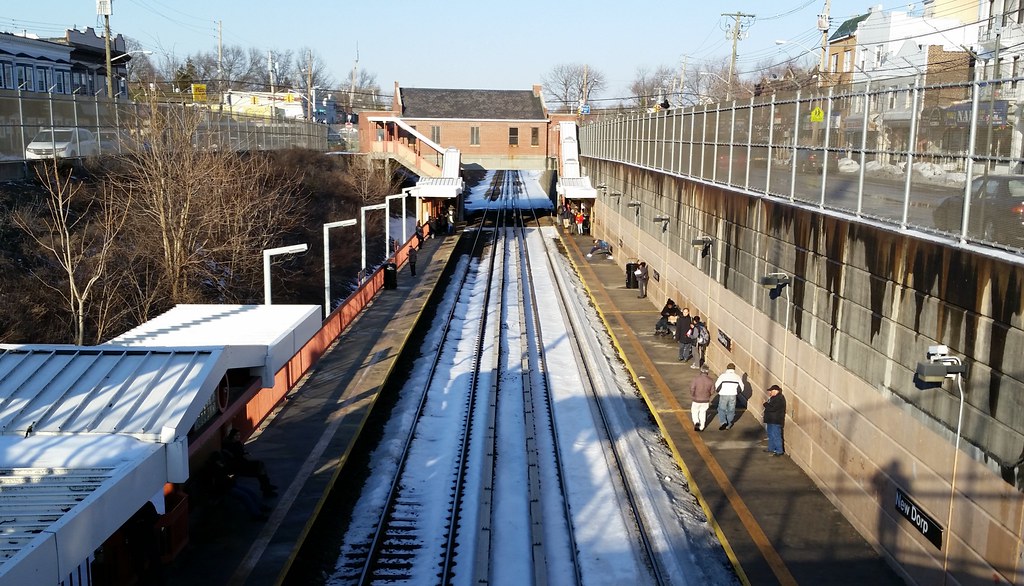 on the Staten Island Railway. Compare to Grant City, one station away.

This rail line opened in 1860. A station building that was erected here at New Dorp in 1889 can still be found standing; it was moved to Historic Richmond Town in 1965. Check it out in Street View. 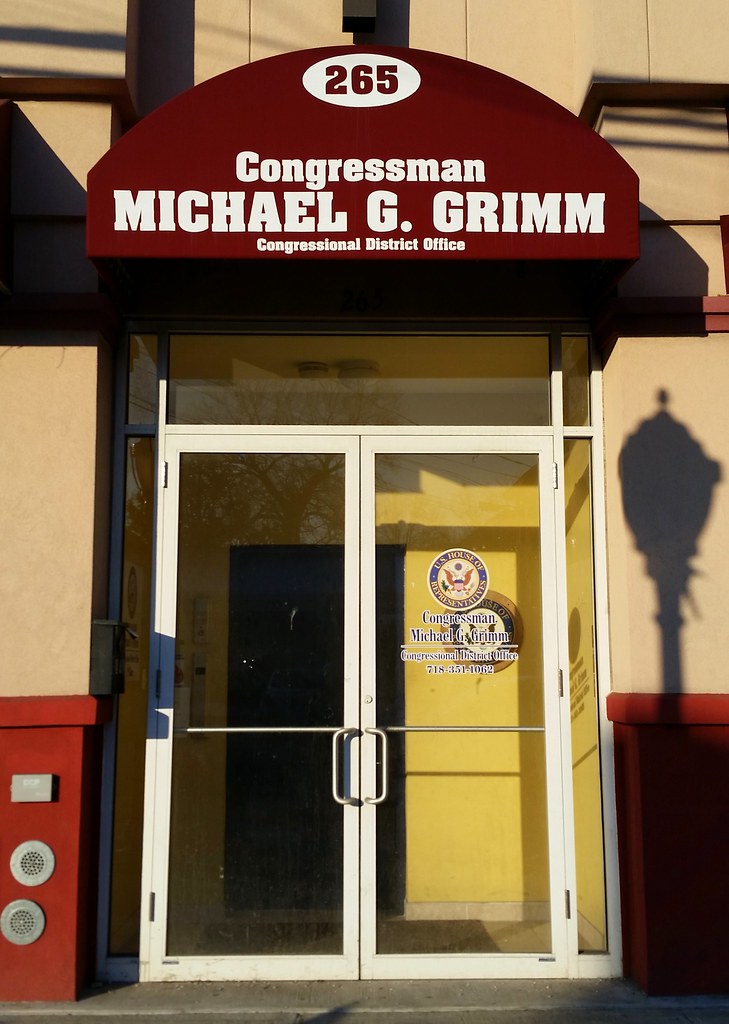 In April of last year, then-Representative Michael "I'll break you in half — like a boy" Grimm, a former FBI agent and Marine, was indicted in federal court on a slew of charges stemming from his pre-Congressional stint as a health-food restaurateur. He was accused of underreporting wages and revenue and hiring undocumented workers at his terribly named Upper East Side restaurant, Healthalicious (slogan: "better than delicious"), as well as lying under oath in a lawsuit brought by restaurant employees.

Despite his legal troubles, Grimm decided to run for re-election in November, leading some to speculate that he was seeking another term largely so that he could then offer to resign as part of a plea bargain. Even with all the controversy swirling around him, he handily won re-election in a truly pitiful contest over a truly pitiful opponent, Domenic Recchia. One voter told the NY Times: "Everybody is kind of counting on Grimm getting convicted and then maybe there will be a special election . . . And maybe we’ll have better choices."

On December 23, a few weeks after his victory, Grimm pleaded guilty to one felony charge of tax fraud while also acknowledging that he had committed perjury and wire fraud and hired illegal immigrants, but he nevertheless vowed not to step down from Congress. Less than a week later, however, after meeting with House Speaker John Boehner, he announced that he would be resigning effective January 5, having served not even a day of his new term. Now it's early March and his former district office here on New Dorp Lane still looks the same as ever (compare: September 2012, March 2015), even though it's been nearly two months since one could accurately describe Michael G. Grimm as "Congressman".

UPDATE (Oct. 31, 2015): Dan Donovan, the Staten Island district attorney whose office handled the controversial (because it didn't produce an indictment) grand jury inquiry into the death of Eric Garner at the hands of the police, was selected by the voters in May to replace Grimm in Congress, and he has since taken over Grimm's old district office on New Dorp Lane. In July, Grimm was sentenced to eight months in prison, with the judge telling him: "Your moral compass, Mr. Grimm, needs some reorientation." He started serving his sentence in September at a minimum-security prison camp in western Pennsylvania.

Baker on an I-beam 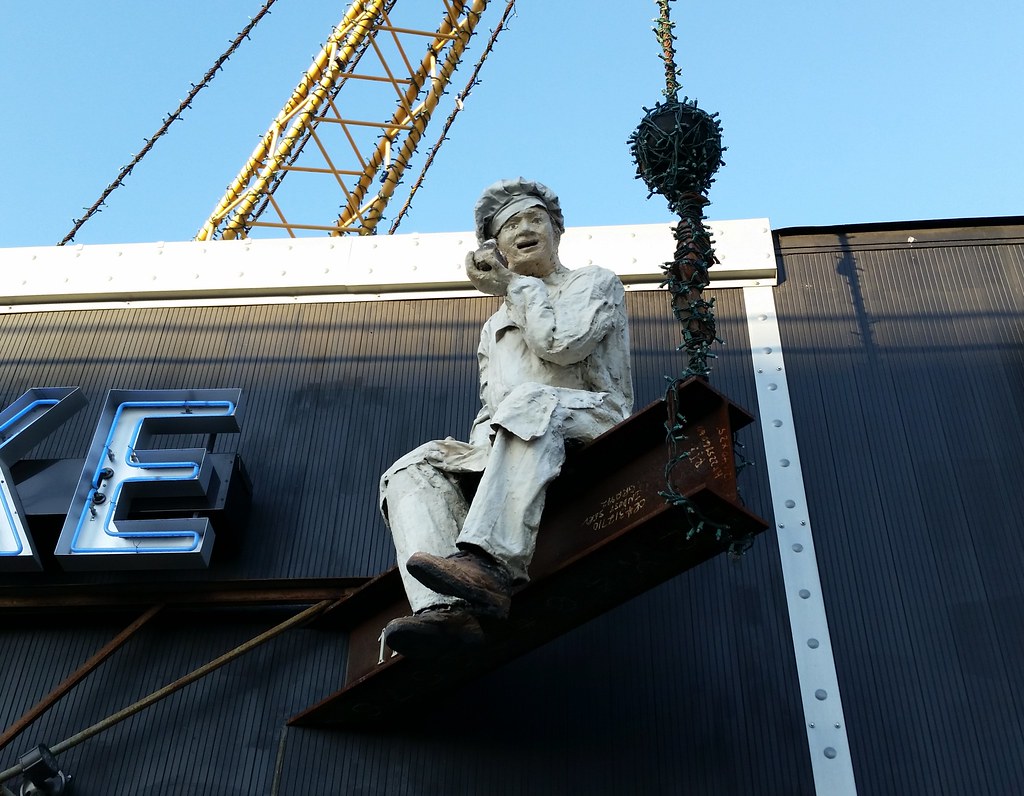 The Lane on the Lane 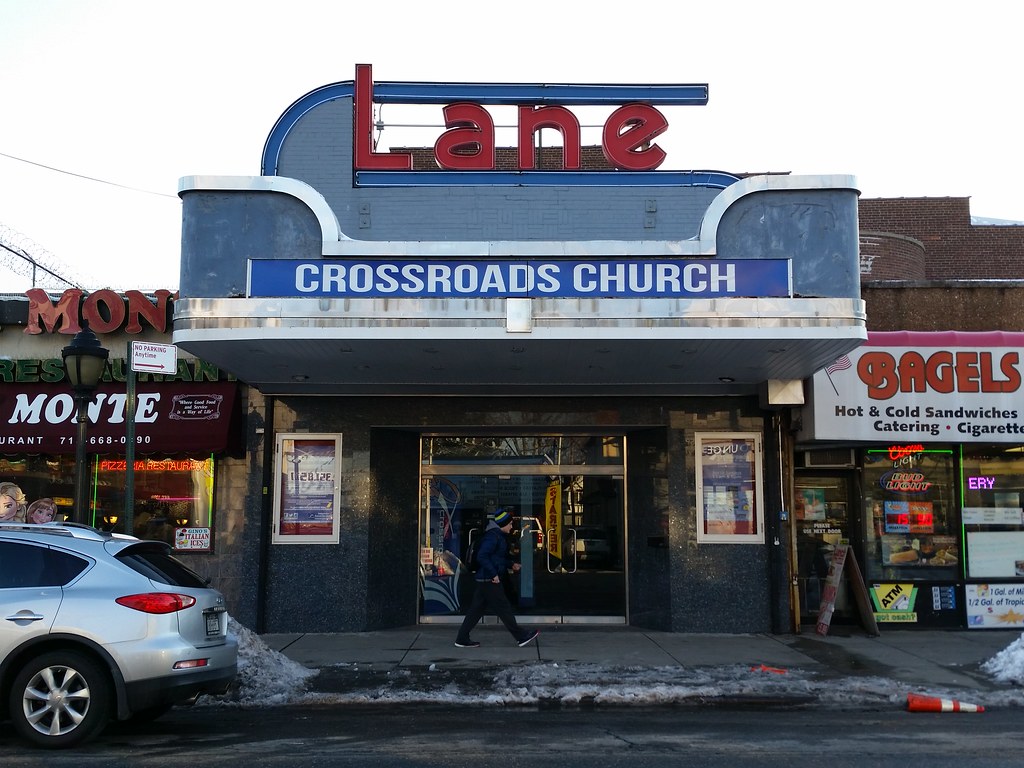 The Lane Theater on New Dorp Lane opened on February 10, 1938, playing One Hundred Men and a Girl as its first feature film. According to the theater's 1988 landmark designation report, its interior "is one of the last surviving pre-World War II movie theater interiors on Staten Island, and one of the few known largely intact examples of the Depression-era, Art Moderne style theater interior in New York City." Here's how the architectural historian Christopher Gray described the place in 1988:

A flowing serpentine corridor leads to a 550-seat auditorium in the Art Moderne style. There is stepped paneling on the ceiling and streamlined bands on the walls like those on a 1930's radio. The original carpet and stage curtain had zig-zag patterns.

The most striking element of the interior is the painted ceiling. Large areas of plum, green and blue are bounded by rainbows of color and decorated with random designs that seem patterned after stellar explosions but bear an abstract resemblance to the masks of comedy and tragedy often used in theater decoration.

Period photographs also show unusual painting schemes along the walls, including four large areas with more stellar designs set against black fields. According to the yearly Theater Catalogue for 1948, the Lane was one of the first theaters to introduce fluorescent murals using black light.

The walls were painted over in 1976, but the recessed black lighting still survives, as do other, exposed lighting fixtures. These range from unusual Buck Rogers-style aluminum affairs to Empire-moderne chandeliers, which mix classical metalwork with modernistic glass tubing.

You can check out some photos of the interior here.

The Lane showed its last film around 1989. As far as I can tell, it sat mostly vacant for the next two decades, except for brief stints as a performance venue and a nightclub between 1998 and 2001. In 2009, Uncle Vinnie's comedy club took over the building and fixed it up, but went out of business after less than a year and a half. Crossroads Church, the current occupant, moved into the old theater in 2012.

I learned from Forgotten New York that Eminem played the Lane in 1999, just as his career was blasting off. A writer for Rolling Stone was at the show and reported on it in a profile of the rapper that ran in the magazine a few weeks later: "Eminem is already a bona fide star, the type not likely to play a club this small again. The only reason he is here at all is that this date was booked before his [major label] debut album entered the charts at Number Two."

A new kind of enemy 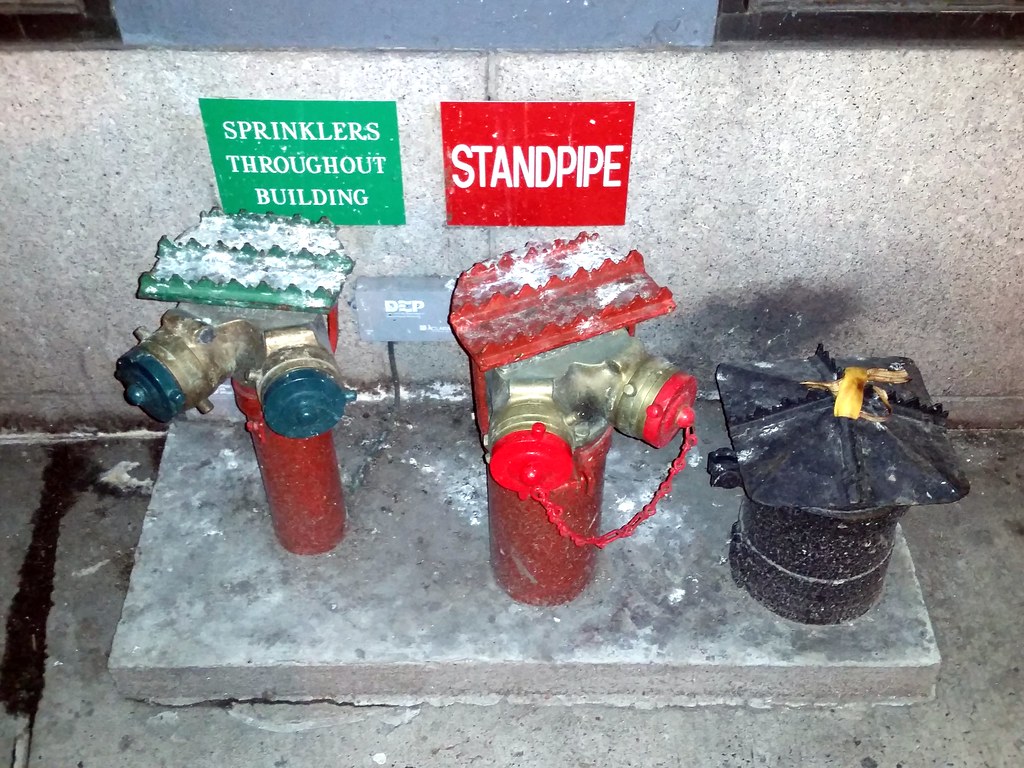 These jagged rump jabbers may be second to none when it comes to repelling a human tuchus, but they're powerless to stop the advances of a rogue banana peel.

(Spotted in Manhattan after returning from Staten Island.)