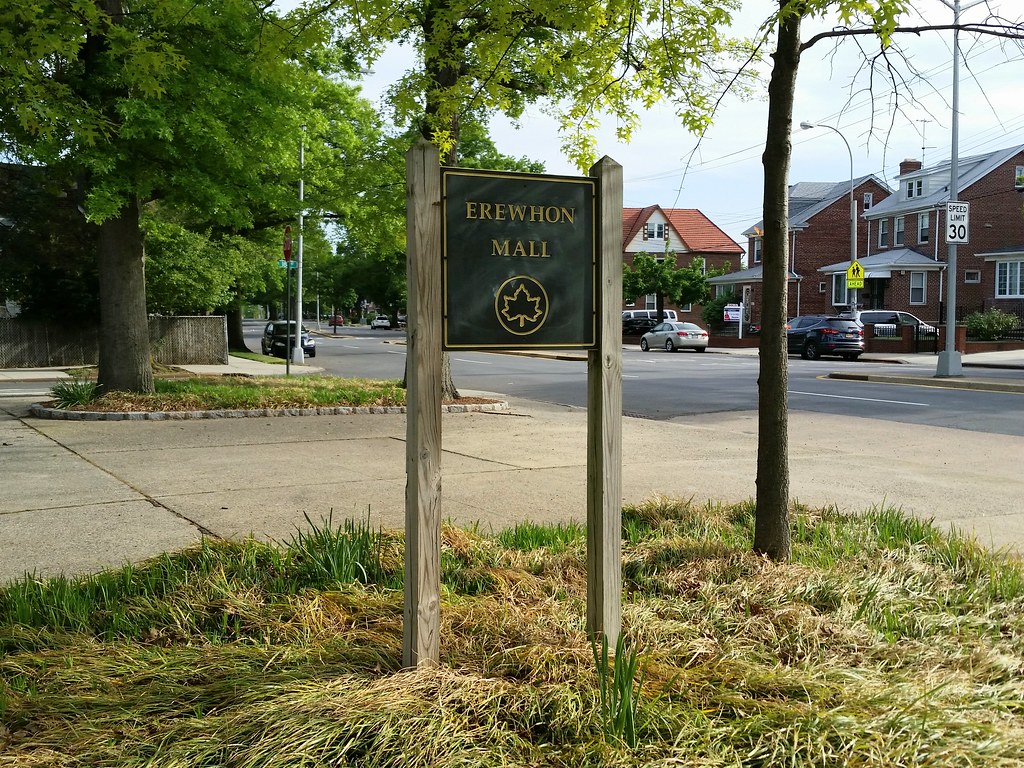 This little triangle of parkland takes its name from Samuel Butler's 1872 novel Erewhon: or, Over the Range. According to the Encyclopædia Britannica, Butler's imaginary land of Erewhon

at first seems utopian in its disregard for money—which lends status but has no purchasing value—and machines—which have been outlawed as dangerous competitors in the struggle for existence. Erewhon has also declared disease a crime for which the sick are imprisoned, and crime is considered a disease for which criminals are sent to the hospital. As the unnamed narrator further examines the institutions of Erewhon, his illusions of utopia and eternal progress are stripped away.

You may be wondering what connection this sparsely planted wedge of concrete could possibly have to Erewhon. I've learned that a good first step in trying to decipher a park name is to look at a map, because former Parks Commissioner Henry Stern often used the names of adjacent streets as inspiration for park names. And that appears to be exactly what he did here, as the street on the west side of Erewhon Mall is Utopia Parkway. In an article titled "Erewhon and the End of Utopian Humanism" in the journal ELH, Sue Zemka says that Erewhon was

written with Sir Thomas More's Utopia in mind. More combined two words to coin his seminal neologism: "eutopos," which means the good place, and "outopos," the place which is nowhere. "Erewhon" is "nowhere" misspelled backwards, the soft vowel beginning of "eutopia" thus recalled in a word which, like "utopia," also inscribes its negation.