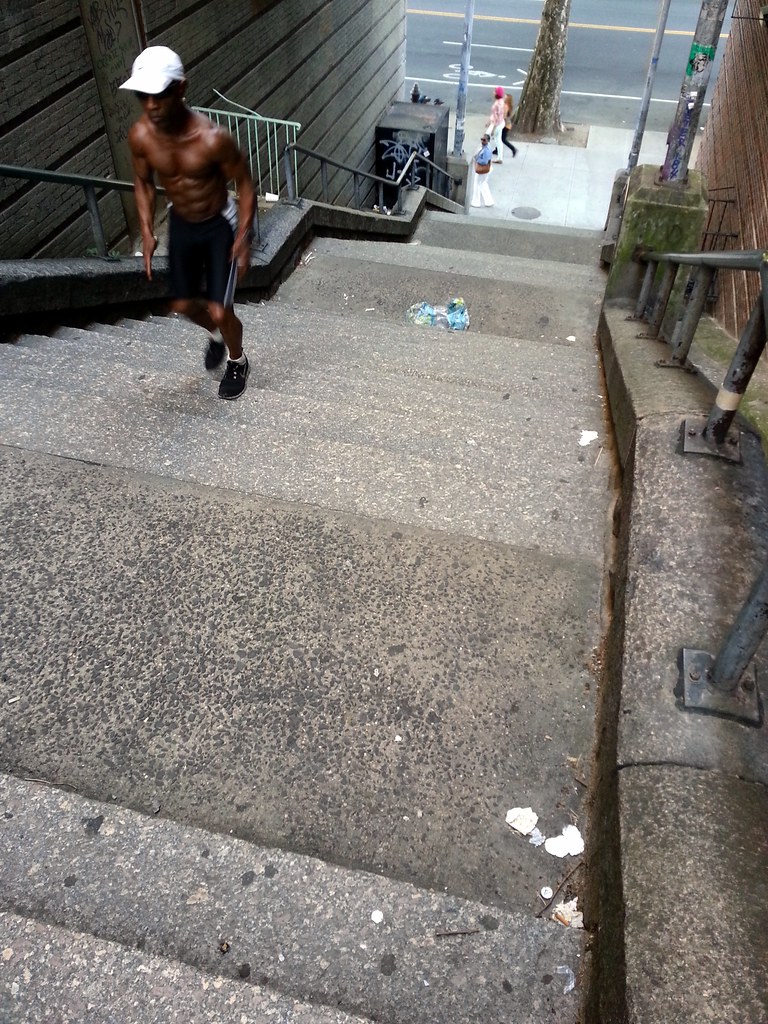 There's a sizable subset of males in certain parts of this city who find no shame in, and who make a regular practice of, stopping dead in their tracks, pivoting around, and blatantly ogling the backsides of attractive women who pass them on the sidewalk. (I'm sure they're ogling the frontsides as well, but the focus of their gaze only becomes apparent to an observer once they perform the conspicuous 180-degree spin move.) Their expressions and body language often exude an aggressive, amped-up machismo, which has always led me to assume that they probably also exhibit other behaviors common among the tough-guy crowd — namely, for the purposes of this story, homophobia. Or, to be more precise, a fear of undermining the facade of virile, heterosexual masculinity that they are trying to present to the world.

The gentleman you see before you, getting in his cardio workout for the day by running up and down this interminable staircase, is an extraordinary physical specimen. His abs look like they could be put into service as a commercial grapefruit juicer. To no great surprise, his almost comically well-toned torso grabbed the attention of several female passersby, including the middle-aged woman at the bottom of the staircase drinking in the scene as she snails her way down the block. (Just moments before, the girl in the pink hat was catching a healthy eyeful as well.)

Shattering the stereotypes I had constructed, however, were the half-dozen men I saw whose swagger and gait were typical of the aforementioned fanny oglers, but who didn't hesitate for a second to give this guy the exact same kind of totally obvious stop-what-you're-doing-and-drop-your-jaw treatment that they normally reserve for the well-proportioned lady-strangers in their lives. Any worry of "looking gay" in front of their friends was relegated to the nether corners of their minds, if even present at all. They were just basking, happily and publicly, in the glorious abdominal aura of a shirtless Adonis whose path they were fortunate enough to cross on a sunny June afternoon.