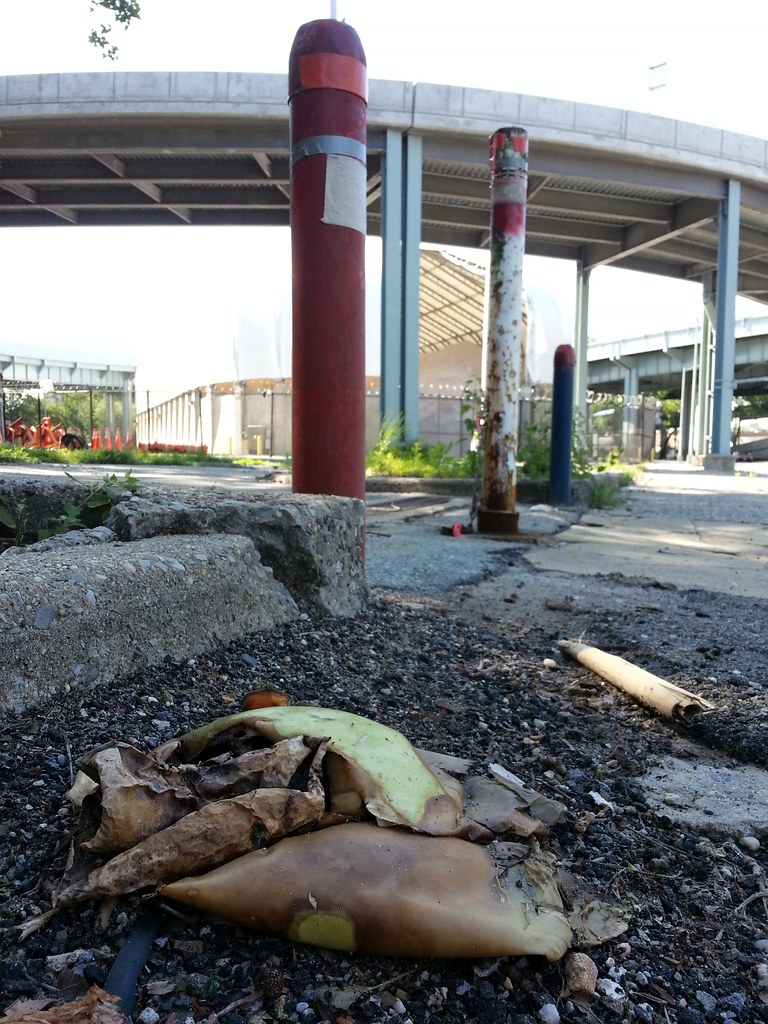 A few years ago, while heading south on the FDR Drive, I spotted a handwritten sign bearing the name "Otis Houston Jr." along with instructions to "Goggle ME".

When Goggled, Mr. Houston reveals himself to be a fascinating character. Here are some excerpts from a 2003 NY Times article about his performance art:

The other day in Harlem, Otis Houston Jr. sat near the southbound lanes of the Franklin D. Roosevelt Drive with a white metal bird cage on his head, one hand gripping a plastic steering wheel, the other holding a Cuban cigar case. A ballpoint pen was perched in his lips like a cigarette. Morning commuters were rushing by. . . .

By dressing like an athletic firefighter or standing near the highway with a bunch of ripe bananas on his head, Mr. Houston has tried, in his own arcane way, to impart a lesson about good health to the city's commuters. . . .

He is now exploring the dangers of smoking -- thus the Cuban cigar and ballpoint pen. He also keeps a pair of exercise bicycles fetched up against the wall of a nearby overpass, and drivers are frequently treated to the sight of him with his head bowed and his legs pumping. . . .

This year alone, he says, he has walked around the island of Manhattan a half-dozen times. He plans to do it a half-dozen more. . . .

He is a spry, fit man with a habit of talking in unstoppable monologues and a laugh so hearty that he often has to walk in circles until it peters out and dies.

The Times wrote him up again last year on the occasion of a short documentary about him being completed.

I've yet to meet the man in person, but I imagine the rotting watermelon above is his doing. He's typically out here by the Triborough Bridge interchange in the morning, so I'll make sure to drop by earlier in the day next time I'm in the area.