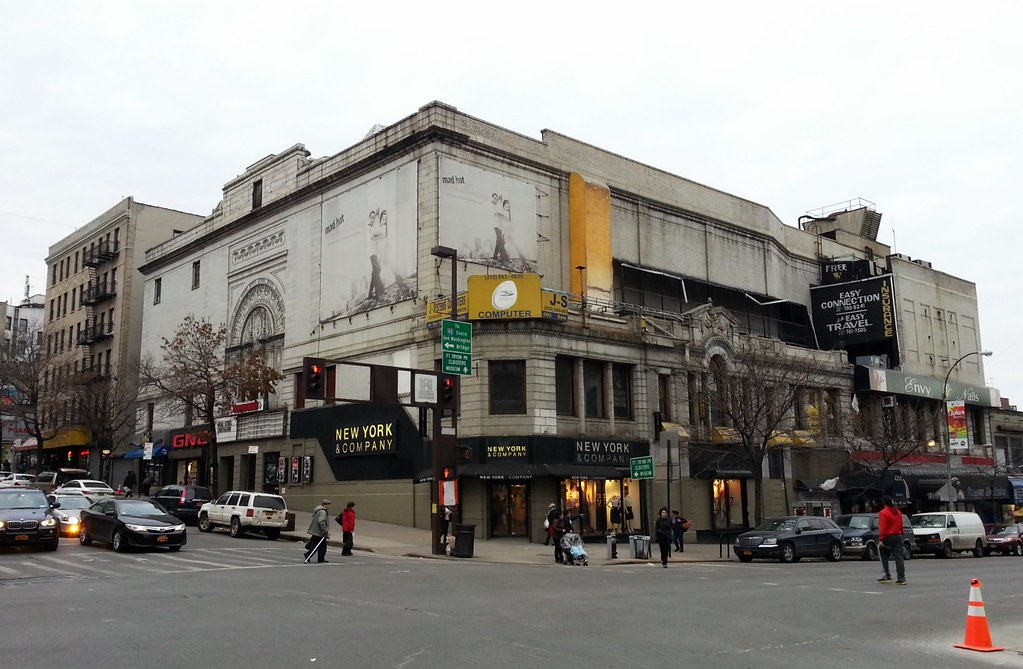 When it opened in 1920, the Coliseum (photos) was the city's third-largest theater, a 3,500-seat movie and vaudeville house. It was still showing films as recently as 2011, although it had become a multiplex by that point, with a good chunk of the original theater converted into retail space.

The program from the Coliseum's opening night is available online. It contains several pages of historical information, and even a little social commentary:

Eighteen hundred years ago, the people of the greatest city of that day came to another Coliseum for their "entertainment." The Romans loved a welter of blood. Slaughter was sport. Gladiatorial combats were recreation for the Emperors, the aristocrats and the mob.

We sit in a magnificent palace, luxuriously appointed, and laugh. But we have only lately done with the most murderous war in the history of civilization.

The program goes on to claim that the theater occupies the former site of "the famous old Blue Bell Tavern, teeming with memories of Colonial days, Revolutionary days, and days when the Republic was young", where "scores of the most celebrated statesmen, diplomats and soldiers America ever produced . . . once had their 'nips' and their beverages prepared for them". For, you see, "the Blue Bell was no ordinary hostelry, where drinks were sipped only by citizenry of low repute and no standing. The Blue Bell was distinctly a tavern with a lineage."

That all sounds a bit overblown, but the Blue Bell was indeed a well-known tavern in then-rural northern Manhattan. It was notable enough that the Museum of the City of New York crafted a small-scale replica of it, "re-created in wax, perfect in even the smallest detail", for a historical exhibit in 1930. And it did stand somewhere around the present-day intersection of Broadway and 181st Street (pictured above), although sources vary on its exact location.

There are two great tales of romance, in which love triumphs over wartime allegiances, that took place at the Blue Bell during the Revolution. The first occurred in the early days of the war, after the Americans had been driven out of Manhattan. Colonel Johann Rall (or Ralle), a commander of German troops fighting for the British, made the Blue Bell his headquarters. And that's when things started to heat up...

[The tavern-keeper] had a pretty sister, whose charms smote one of Ralle's aides so powerfully, that he proposed marriage within twenty-four hours after they first met. He was a fine-looking young Anspacher. He promised to remain in America when the war should be over, and vowed eternal fidelity to her. The maiden's heart was touched, first with sympathy, which speedily became transformed into the tender passion. Her mother consented to the marriage, but her brother stormed. The gallant Ralle, who had passed through a similar experience in his own country, favored the union, and on the evening before his departure from the Blue Bell, the lovers were united in marriage, in the secrecy of the colonel's room, by the chaplain. The bride followed her husband in the chase of Washington across New Jersey, and the young Anspacher was slightly wounded, and was made a prisoner when his commander fell at Trenton. Refusing to be exchanged, he took the oath of allegiance to the newly-declared republic at Morristown, and settled in East Jersey, where many of his descendants are now living.

The second story was recalled in the mid-1800s by Major Robert Burnet, at that time a 90-year-old veteran whose "mind was clear, and [whose] memory of the events of his earlier life was marvelous." At the end of the war, after the Treaty of Paris had been signed and the British were preparing to leave the city, the Americans had re-entered Manhattan and were marching south past the Blue Bell...

Just as the rear-guard had filed past the tavern, a young man, in the uniform of a British soldier, and followed by a modest-looking young woman, rushed out and beckoned to [General George] Washington vehemently. The chief halted, when the young man, in great perturbation of mind, said he was a deserter from the British army, and implored protection. He was placed in charge of Major Burnet, who took the refugee to his quarters. There he learned that the young man was a sergeant . . . who had for some time loved and was betrothed to the young woman who was with him; that her parents, who lived in the city, would not consent to her marriage unless he would stay in this country; that [the couple] had arranged a plan a few days before for a desertion on his part and an elopement on hers; that they were to meet at the Blue Bell and be married, and there wait for the protection of the approaching American troops. Their plan had worked well. She, on pretense of visiting an aunt at Bloomingdale, had made her way on foot to the Blue Bell. He had managed to escape the sentinels at the unfinished hospital, on Broadway, in the darkness of a rainy night, and, under its shadow, had also made his way to the Blue Bell, where they had been married, the day before, [in the clergy-less style] of the Quakers, by declaring, in the presence of witnesses, that they took each other for life companions, as man and wife. He showed Major Burnet their marriage certificate, signed by half a dozen witnesses. The major provided for them that night, and the next day they accompanied the troops into the city. . . .

A bard in Major Burnet's corps composed a number of verses on the occasion, of which the following are all that the veteran remembered:

" A soldier and a maiden fair,
Helped by shy little Cupid,
Fled from the camp and mamma's chair,
(Such guardians, how stupid!)
And to the Blue Bell did repair,
To have themselves a-loopèd

" In silken cords by Hymen's hand.
A parson there was lacking;
So in the Quaker way they wed.
The bond was signed. Then, smacking
each other as a nuptial pledge,
They waited for the backing

" Of our brave troops, for Sergeant M—
Was fearful of a banging
By British guns, should he be caught—
Perhaps a dreadful hanging."

When these two love stories were told in the pages of Appletons' Journal in 1873, the author summed them up with an unintentional pun that wouldn't take on its second meaning for almost half a century, until the Coliseum was built on or near the site of the tavern: "Twice, at least, the Blue Bell has been the theatre of a clandestine marriage."