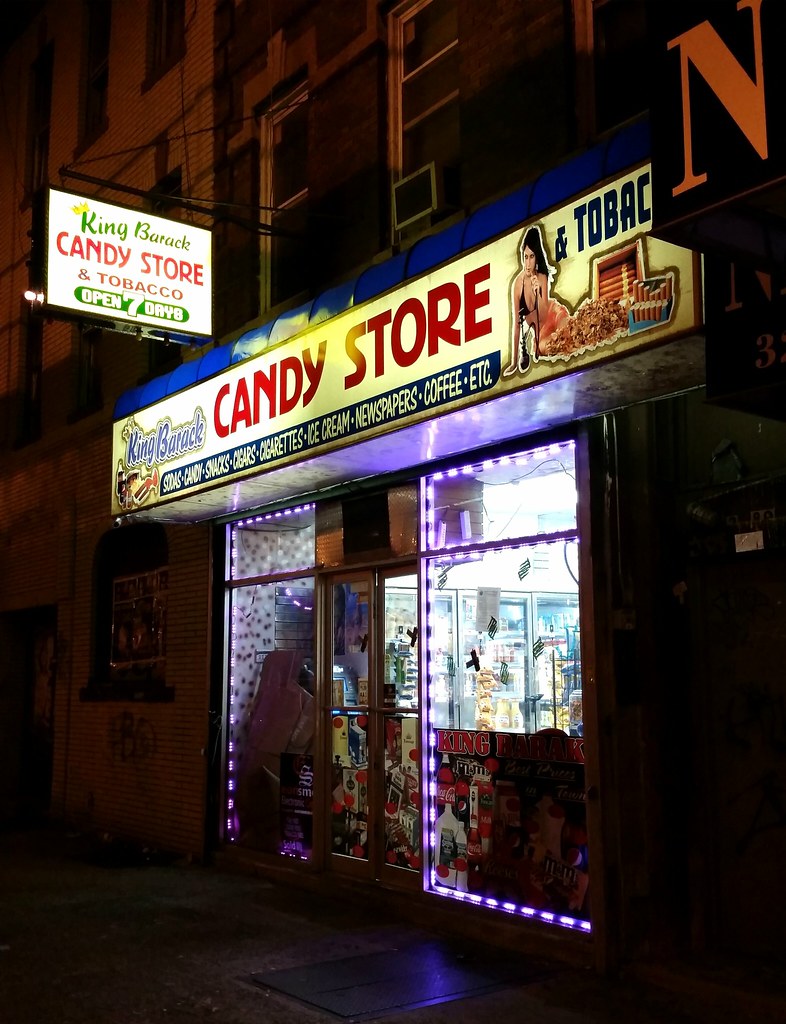 Three Obama-inspired business names in one day? (Here are the other two.) Prior to today, during the entire course of this walking project, I had only come across three other establishments named for our current president. (I previously said I had only come across two, but I had forgotten about the most explicit one of all.) Obama Deli & Grill had already either been renamed or gone out of business when I passed by. Obama Fried Chicken has gone out of business since I passed by. And Barack Hussein Obama Children Center, it seems*, may never have gone into business in the first place (although its awning was still up when the Street View car drove by in October). So it's entirely possible that most or even all of the active businesses in the city named for the president are located here in Cypress Hills, on or just off of Fulton Street, within seven blocks of each other. Weird!

* The NY Post article linked above makes Sheikh Moussa Drammeh ("Sheikh" is his first name, not a title, and is misspelled in that article), a Bronx imam, sound like a sleazeball and/or nutcase.** But from what I've read, he's a well-respected, positive force in his community of Parkchester. In fact, the Post itself honored him with one of its annual Liberty Medals back in 2007. He founded the Islamic Leadership School — the Bronx's only Islamic school — which, in a bizarre coincidence, opened on September 11, 2001. His latest community venture is a neighborhood "peace patrol" that aims to help troubled kids before they turn to crime.

He's also twice been in the news for his generosity to other religious organizations. In 2004, when the Interfaith Center of New York, led by a former dean of the Cathedral of St. John the Divine, was unable to make rent on the Midtown Manhattan space it had called home for five years, Mr. Drammeh gave the group office space in the Bronx free of charge, in the same building that's now home to, among other things, his mosque, his school, and the apparently never-opened Barack Hussein Obama Children Center.

In 2008, when a tiny, aging Jewish congregation in the neighborhood found itself without a home, Mr. Drammeh offered up space in his mosque, rent-free, saying "I’m paying back. I am an immigrant, from Africa. I came here to New York and all the religious freedoms and acceptance, I don’t have to fight for it, the Catholic and Jewish communities already fought, and now it’s for my behalf. It would be very ungrateful if I don’t play any role, especially for the older folk, so they can benefit in turn from my being here. It is my time to say, let me [pay back] at least a little bit for the neighborhood you made and the work you have done." As far as I can tell, the congregation is still in existence and is still meeting in the mosque.

There's also a pedestrian aspect to this story. When the congregation was on the brink of collapse, shortly before Mr. Drammeh's offer, it was taken over by young Chabad rabbis and rabbinical students who had responded to the elderly Jews' requests for help. Forbidden from traveling by motorized vehicle or bicycle on the Sabbath, the Chabadniks began regularly walking the 15 miles from their homes in Crown Heights, Brooklyn to the mosque on Saturday mornings to lead services. (Nerd note: the route mentioned in the article is over 16 miles long.)

** I should note that the Post was correct about Mr. Drammeh inventing what it called a bathroom-sink alarm. In 2013, he was issued US Patent No: 8,344,893 for a "hygienic assurance system" that uses a "plurality of sensors" and a "plurality of visual and audible signals", as well as a camera, to remind people (presumably employees) to wash their hands after using the toilet and to ensure that those who don't wash up properly, "for an adequate time span", can be identified "for later reprimanding . . . by the facilities owner or hygiene enforcer." But I have some good news for those of you who hate washing your hands. I've looked over the patent and found a loophole. Flushing is the action that triggers the system into thinking you need to wash up, so all you have to do is not flush!