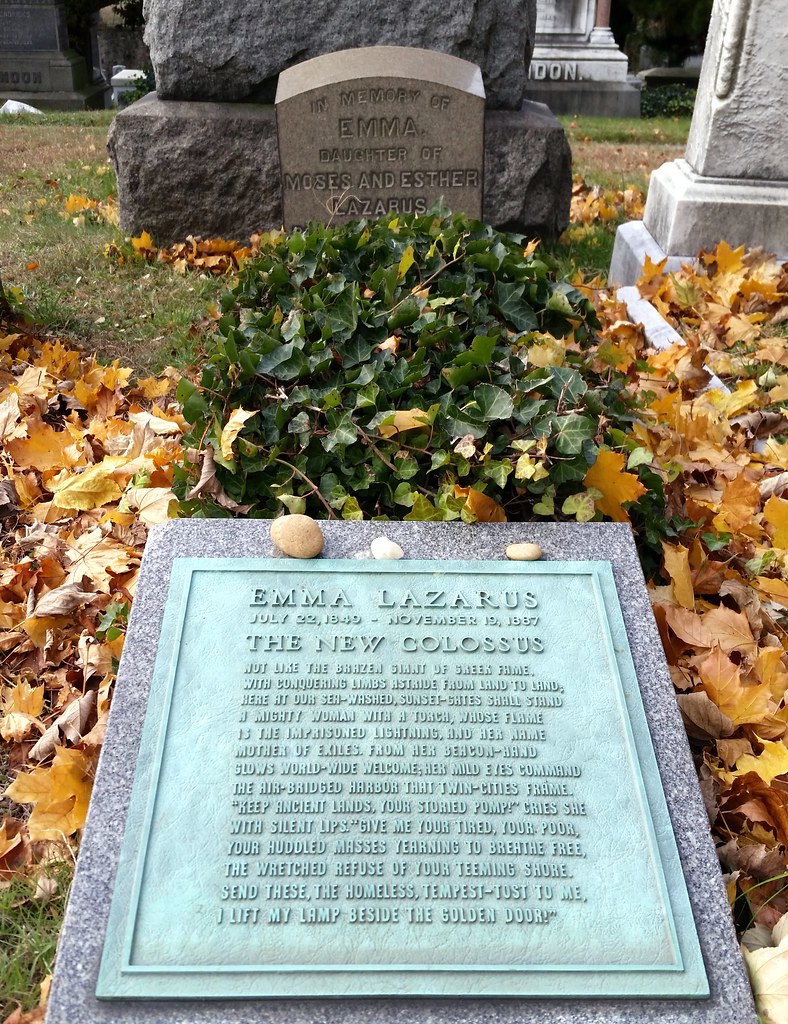 Emma Lazarus (a first cousin of Benjamin Cardozo) was the author of "The New Colossus", the famous poem found inside the pedestal of the Statue of Liberty, which reads in part:

"Keep, ancient lands, your storied pomp!" cries she
With silent lips. "Give me your tired, your poor,
Your huddled masses yearning to breathe free,
The wretched refuse of your teeming shore.
Send these, the homeless, tempest-tost to me,
I lift my lamp beside the golden door!"

(The comma after "Keep" is missing from the versions of the poem on Liberty Island and at Ms. Lazarus's grave.)

The statue originally had nothing to do with immigration, however. It was the verses penned by Ms. Lazarus that eventually fixed it in the popular imagination as a beacon welcoming the tired and the poor of foreign lands to New York Harbor.

When the Goddess of Liberty was given to the United States, its donor's agenda was to burnish France's republican roots after the oppressive reign of Napoleon III and to celebrate the two nations' commitment to the principles of liberty.

The only immigrants mentioned at the dedication in 1886 were the "illustrious descendants of the French nobility" who fought on behalf of the United States against Britain during the American Revolution.

But it was the words of a fourth-generation American whose father was a wealthy sugar refiner and whose great-great-uncle welcomed George Washington to Newport, R.I., that almost single-handedly transformed the monumental statue in New York Harbor into the "Mother of Exiles" that would symbolically beckon generations of immigrants. . . .

Lazarus's "New Colossus," with its memorable appeal to "give me your tired, your poor," was commissioned for a fund-raising campaign by artists and writers to pay for the statue's pedestal.

But while the poem was critically acclaimed — the poet James Russell Lowell wrote that he liked it "much better than I like the Statue itself" because it "gives its subject a raison d'être which it wanted before quite as much as it wants a pedestal" — it was not even mentioned at the dedication ceremony.

Finally in 1903, after relentless lobbying by a friend of Lazarus who was descended from Alexander Hamilton, himself an immigrant, it was "affixed to the pedestal as an ex post facto inscription," the art historian Marvin Trachtenberg wrote.