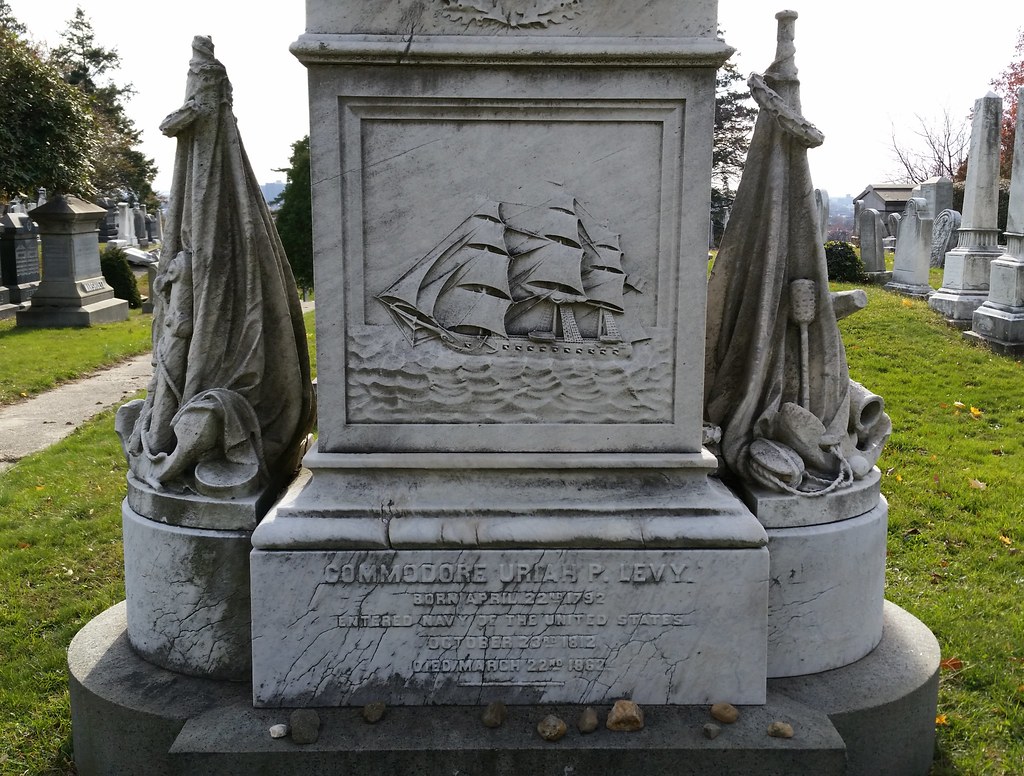 The first Jewish commodore in the US Navy, Uriah Phillips Levy was a key figure in the push to abolish flogging — or "the barbarous practice of corporal punishment", as his grave monument puts it — in the Navy. (He was, however, once court-martialed for "scandalous and cruel conduct" for his implementation of an alternative punishment for a teenage boy on his ship who "was charged with mimicking an officer of the ship. Unwilling to flog the boy, Levy ordered him tied to a gun with his trousers lowered. A small quantity of tar, variously described as the size of a silver dollar to the size of a man's head, was applied with oakum to his buttocks along with some parrot feathers.")

Levy is best remembered for his role in saving Thomas Jefferson's Monticello. When he arranged to purchase the property from James Turner Barclay in 1834, eight years after Jefferson's death, the place was in a sorry state. Jefferson had been unable to afford upkeep on the house in his later years, and Barclay, a local druggist with "a hare-brained scheme of turning Monticello into a silkworm farm", allowed things to fall further into decline.

A great admirer of Jefferson*, Levy gathered "a small army" of hired workers and slaves to bring the house back to its former glory. In his will, he offered the property to the federal government for use as a farm school for children of deceased naval warrant officers. Shortly before his death in 1862, however, Monticello was seized by the Confederacy. The federal government did not accept Levy's bequest of the property, and his will was declared invalid in 1865, leaving the place in a state of legal limbo after the Civil War.

By the time Uriah's nephew Jefferson Monroe Levy gained control of the property in 1879 following a lengthy period of litigation, it had once again slid into disrepair. It was being used as a working farm, with grain stored in the house and cattle herded into the basement during winter. Like his uncle before him, Jefferson Levy began fixing up the house and grounds, with the intent of restoring them "to the original plans and style". In 1923, the year before his death, he sold Monticello to the Thomas Jefferson Memorial Foundation (now the Thomas Jefferson Foundation), which has maintained it and kept it open to the public ever since.

* In 1834, Uriah Levy presented Congress with a bronze statue of Thomas Jefferson he had commissioned. It was the first full-length portrait statue to be placed in the US Capitol, and is the only statue in the Capitol donated by an individual citizen. Levy gave the plaster model used to create the statue to the City of New York; it currently stands in the chamber of the City Council, where its presence has long been decried by former Councilman and current State Assemblyman Charles Barron, who has described Jefferson as a "white, slave-owning pedophile".