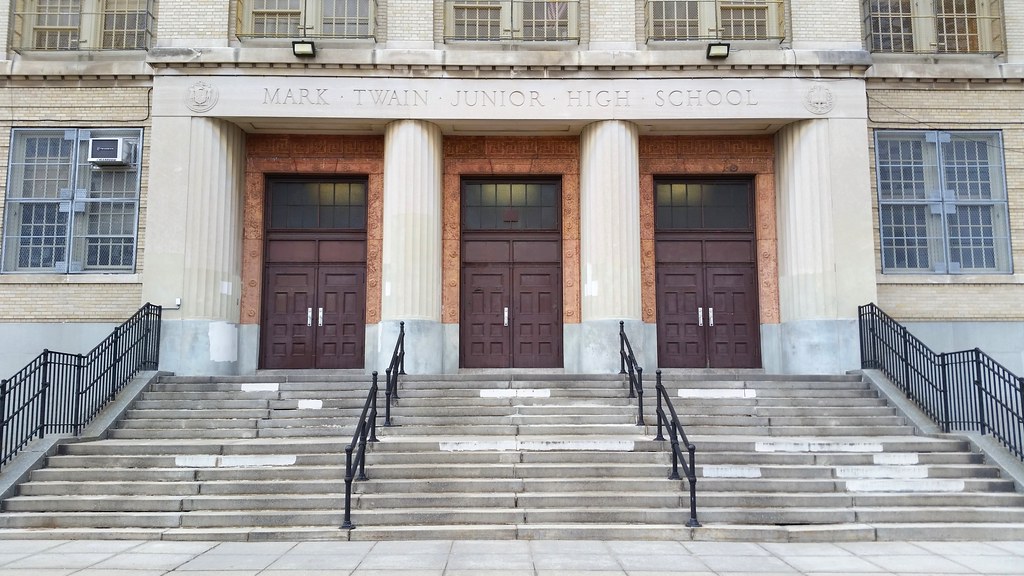 Coney Island's Mark Twain Intermediate School (formerly Mark Twain Junior High School), a selective magnet school for gifted and talented students, is one of the city's top middle schools. Until 2008, it admitted students under a racial quota system mandated by a 1974 federal court ruling (this ruling also dictated that Mark Twain become a magnet school in the first place). But the quotas weren't part of an affirmative action program — they were originally intended to increase the number of white students at what had been a segregated school. Over the years, however, as the demographics of the school district shifted, the quotas had some unintended consequences. An NY Times article from February 2008 explains:

The original court order for Mark Twain Intermediate School was imposed when the region, District 21, was overwhelmingly white. The court held that the local school board was deliberately segregating that school by sending middle class white students elsewhere. The court ruled that the school should not have more than 10 percent more minority students than the districtwide average, which was about 30 percent.

Over time, however, the neighborhood has changed and the proportion of white students has steadily decreased in the area’s middle schools, down to roughly 40 percent in 2007.

As a result, the court order has ended up leading Mark Twain, now a respected program for gifted students, to require higher scores on admissions tests for minority students than for white students. . . .

The parents of Nikita Rau, an 11-year-old whose family immigrated from India, filed a class action lawsuit last month against the Department of Education after Mark Twain rejected her last year. She scored a 79 on the school’s music admissions test — below the 84.4 required for minority students to be accepted, but above the 77 for white students.

This lawsuit is what finally prompted the city to take legal action in 2008 to have the 1974 desegregation order lifted so that the quota system could be thrown out and a race-neutral admissions policy established going forward.