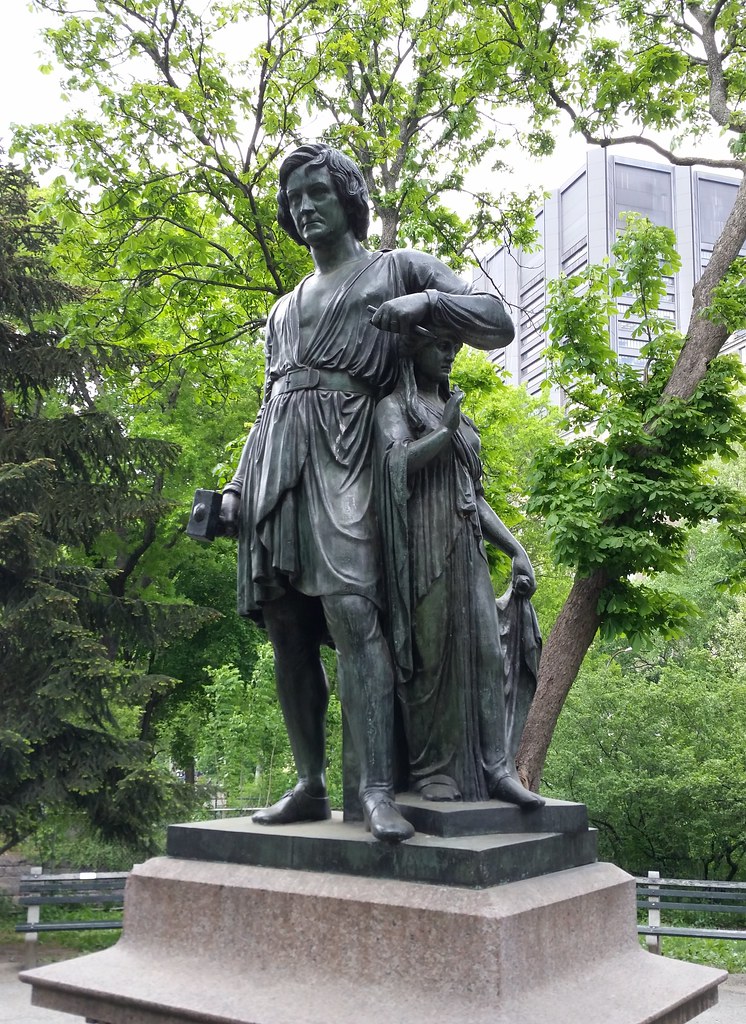 This bronze, life-sized sculpture is a self-portrait of the esteemed Danish sculptor [Bertel] Thorvaldsen (1770–1844), and was dedicated in Central Park in 1894. It is the only statue of an artist displayed in the parks of New York City*, and honors a titan in his field who had broad influence in sustaining the classical tradition in art. . . .

The original marble self-portrait, on which this posthumous bronze replica is based, was carved in 1839. . . . Though in his seventh decade of life when he created this work, Thorvaldsen represented himself as a younger, idealized man draped in a workman’s robe, with his hands holding the tools of his trade: mallet and chisel. His left arm rests on a small female figure, a copy of his figure of Hope, modeled in 1817.

* The only statue of an artist in an NYC park? Not even close. It may be the only statue of a visual fine artist, but there are plenty of statues of other types of artists (musicians, writers, an architect) located in city parks. Here in Central Park alone, we have Duke Ellington, Ludwig van Beethoven, Victor Herbert, William Shakespeare, Hans Christian Andersen, Robert Burns, Sir Walter Scott, Fitz-Greene Halleck, Friedrich Schiller, and Richard Morris Hunt. At the Concert Grove in Prospect Park, you can find busts of Beethoven, Wolfgang Amadeus Mozart, Carl Maria von Weber, Edvard Grieg, Washington Irving, and Thomas Moore. There's a statue of William Cullen Bryant in Bryant Park and one of Antonin Dvorak in Stuyvesant Square. And there are probably others I've neglected to mention as well.