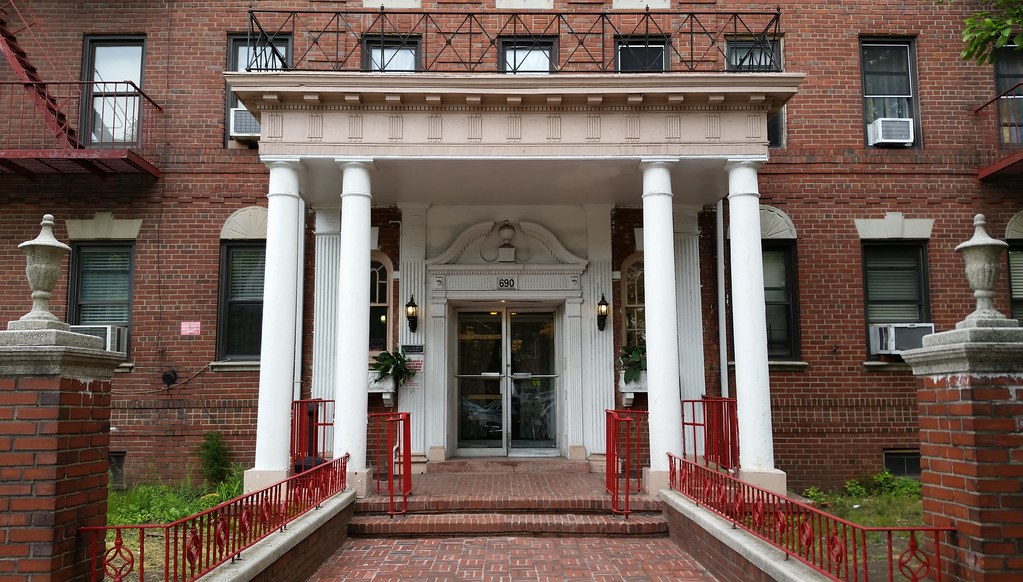 Three items of note from a search for this address in the newspaper archives:

1) 1941: A photo shows Zalman Asher Dunn, a resident of the building and a "tennis star of the Brooklyn College of Pharmacy" (a real athletic powerhouse, I'm sure), providing a woman with "some first-hand information on how to grip a tennis racket".

2) 1945: Vilma Sperling, a 16-year-old professional dancer who lived in the building with her mother, ran off to marry a "wealthy" 36-year-old taxi driver (his mother owned a fleet of cabs). A few hours after their wedding, however, the police arrested the couple at their hotel. Vilma was charged with being a wayward minor, while her husband was charged with abduction and marrying a minor. At his hearing, Vilma testified that she was "terribly" in love with her husband — "who deposited $2,500 in a bank for her and gave her a ring and a fur coat" — and that her mother had demanded a payment of $5,000 if they wanted her consent for the marriage. The charges against the couple were eventually dropped, and while Vilma's mother sought to have the union annulled, Vilma's husband was looking toward the future, telling the press: "No more show business for [Vilma]. She's going to be a real little wife and we'll have lots of kiddies."

3) 1956: George J. Wald, a 34-year-old high school art teacher from the building who had been married twice before, was charged with abduction and rape after eloping with a 17-year-old former student. The girl's parents had him arrested, but her father later relented and asked for the charges to be withdrawn after the couple agreed not to see each other until she turned 18. The district attorney said he would still "submit the matter to the grand jury, but he also indicated that he did not want to stand in the way of 'true love.' "