Lap 1 of 5,649 is complete at this year's running of the Self-Transcendence 3100 Mile Race, a 3,100-mile race around a single block in Jamaica Hills, Queens. First around the block was Ashprihanal (blue shirt, dark blue shorts, blue shoes), who would go on to lead the pack today with 172 laps — 94.39 miles! 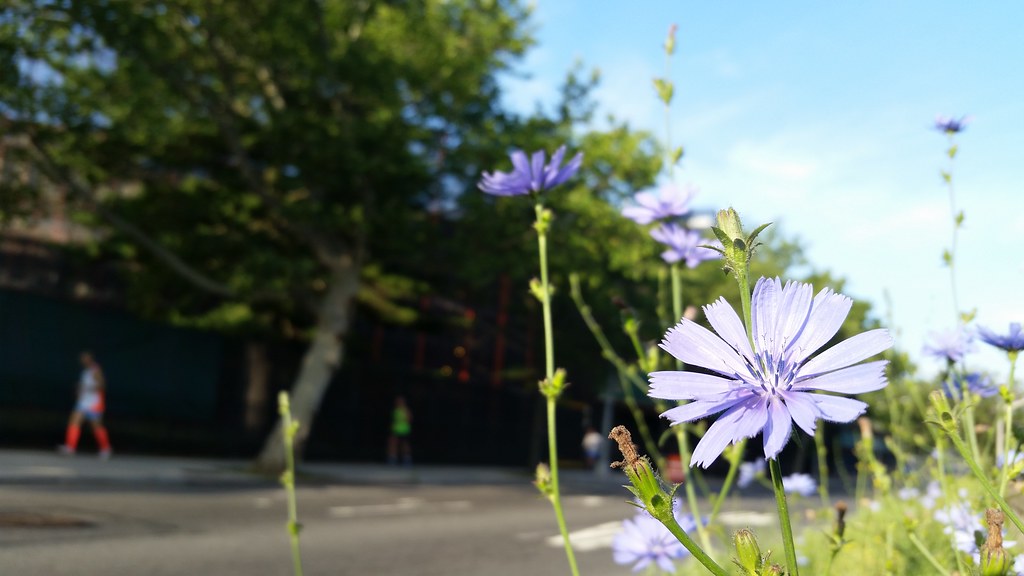 The chicory is in bloom across the street from the Self-Transcendence 3100 racecourse, in a narrow, unkempt strip of greenery that runs alongside the Grand Central Parkway. 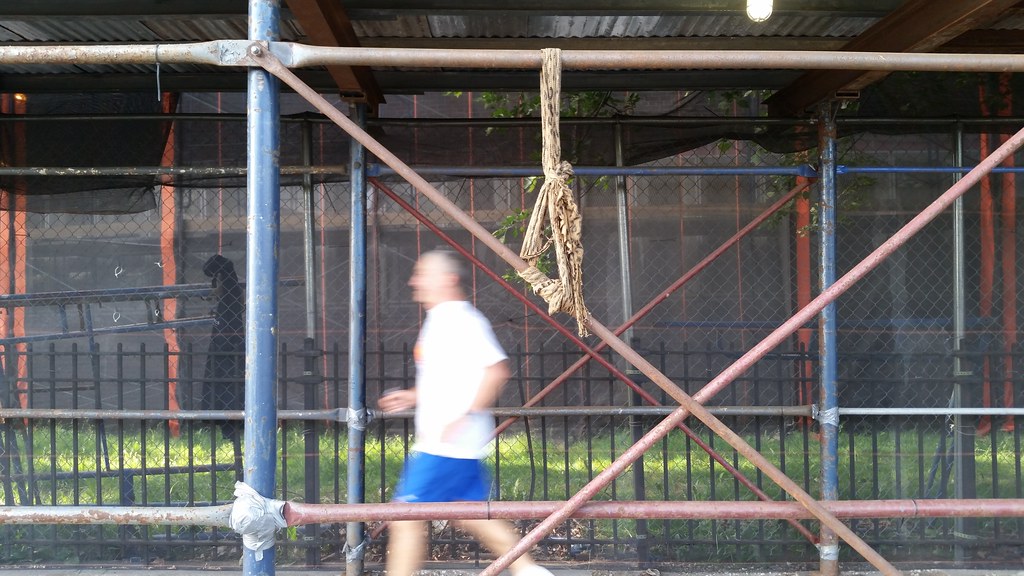 Because of work being done on Thomas Edison High School*, about a quarter of the Self-Transcendence 3100 racecourse is covered by sidewalk sheds this year. I assumed the runners would see these dreary, constricting structures as an ugly pain in the butt, but then one of the runners pointed out to me that the sheds will provide respite from the sun and the rain all summer long.

* Edison's website features an inadvertent tribute to the race. At the top of the home page is a picture of the school pulled from Google Street View. Taken in July 2012, the image shows two competitors in that year's race making their way around the block. (I believe the two runners are Pushkar and Baladev; Baladev is also taking part in this year's race.) 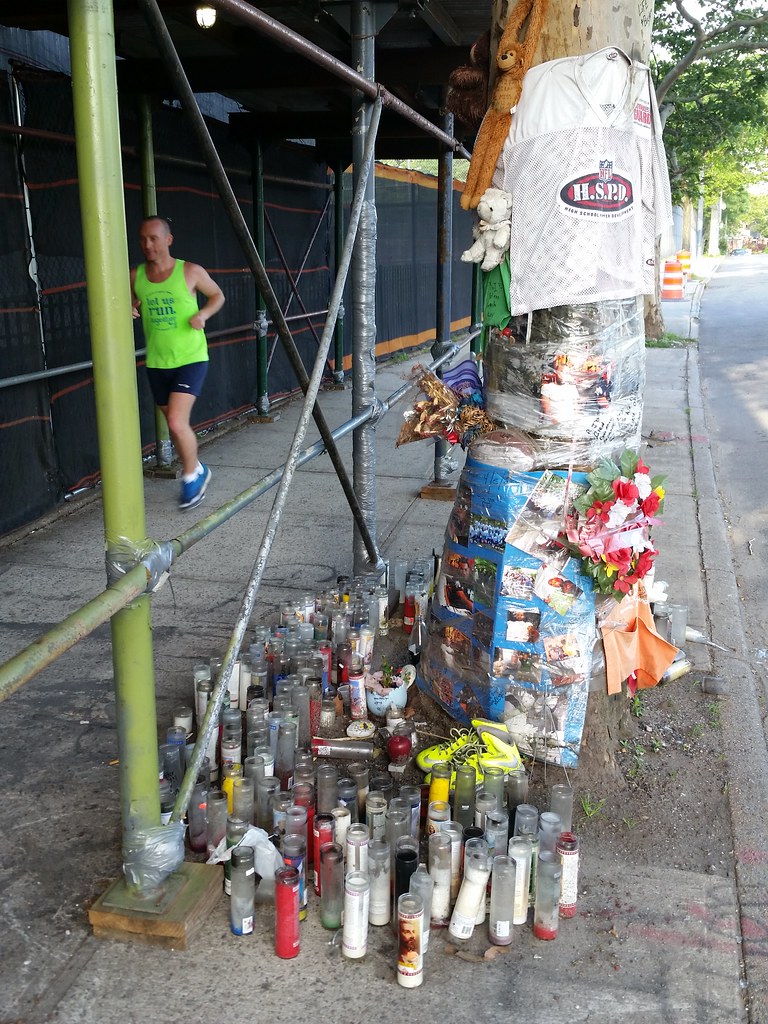 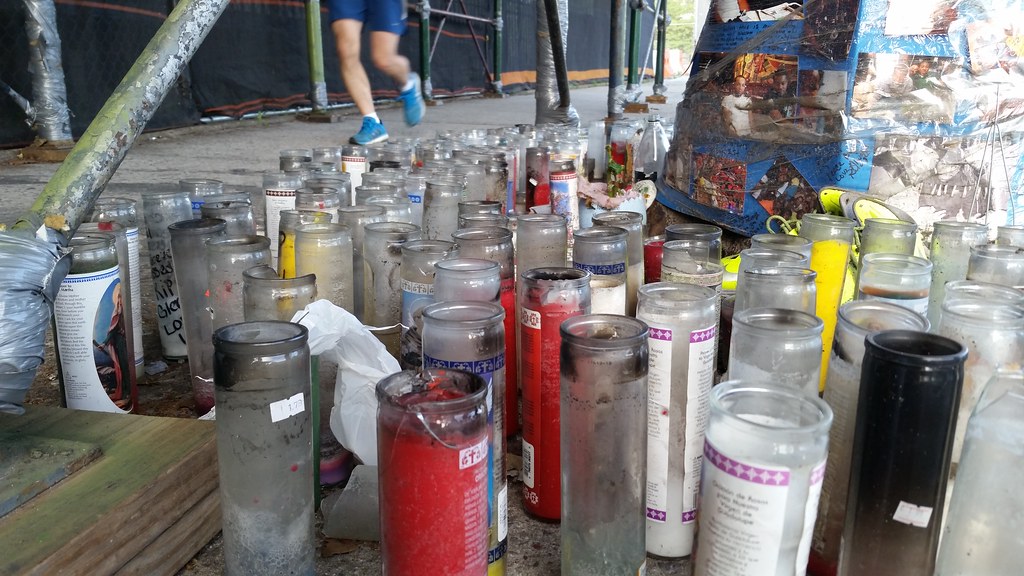 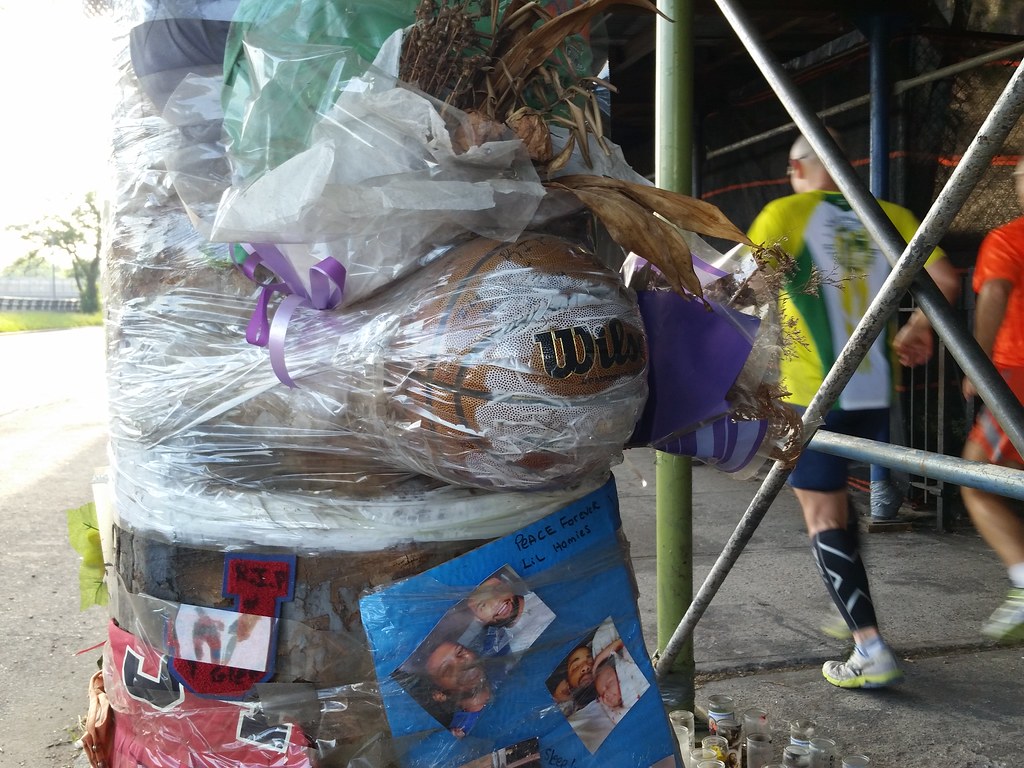 These candles, photos, flowers, and mementos were placed here in memory of Dillon Charles and Glenn Wade, two 23-year-olds who died in early April when their car crashed into this sidewalk shed outside Thomas Edison High School.

By the end of today, the first day of this year's Self-Transcendence 3100 Mile Race, all the runners will have already passed this memorial more than 100 times each. 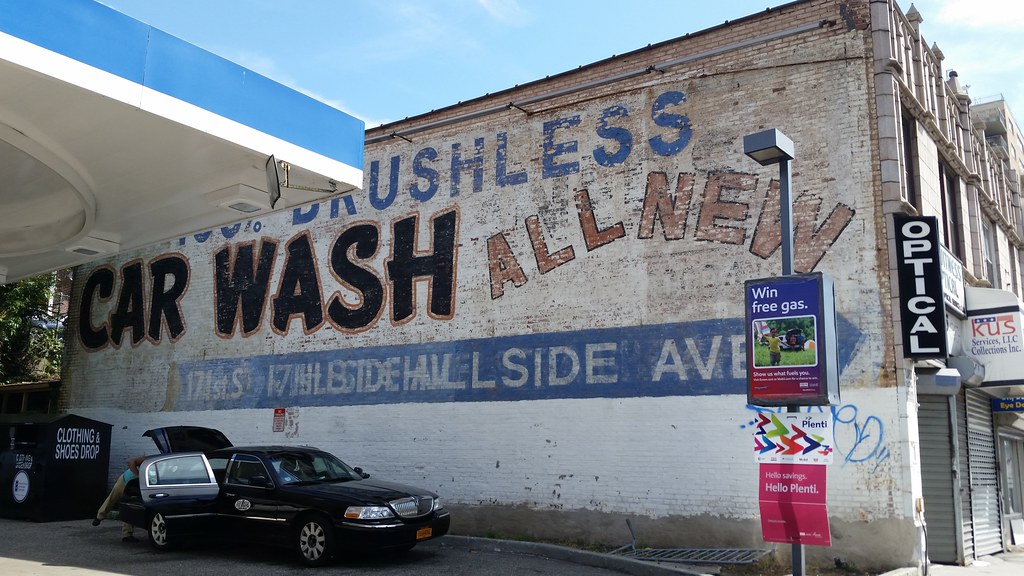 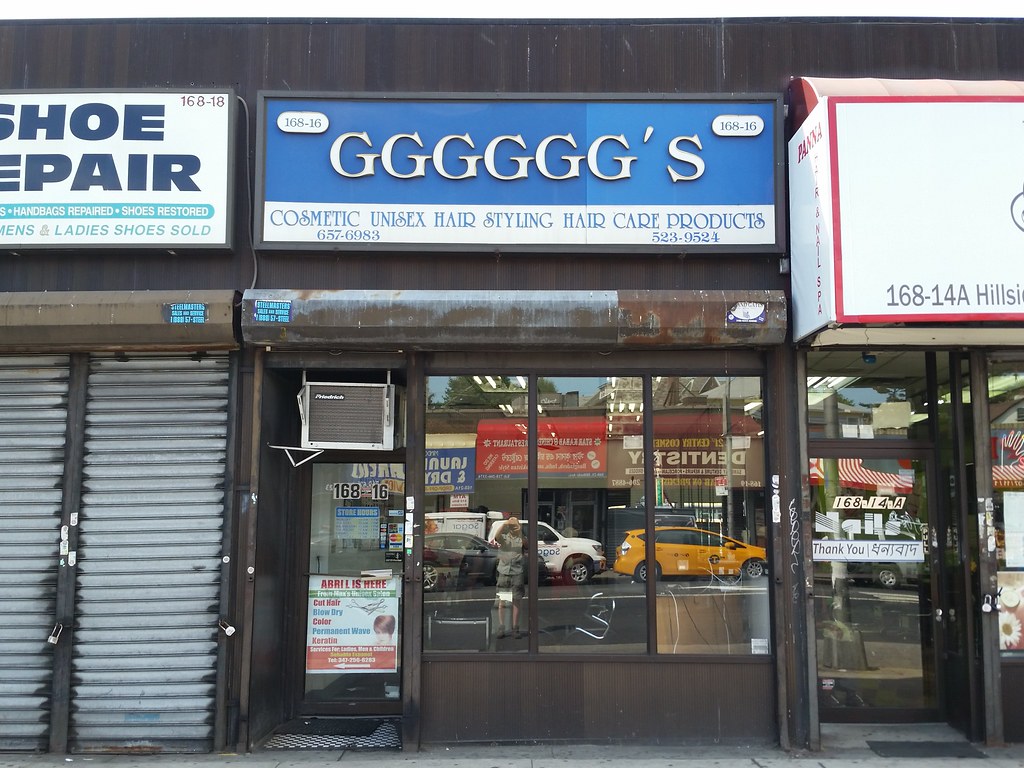 According to the barber inside, the G stands for George. 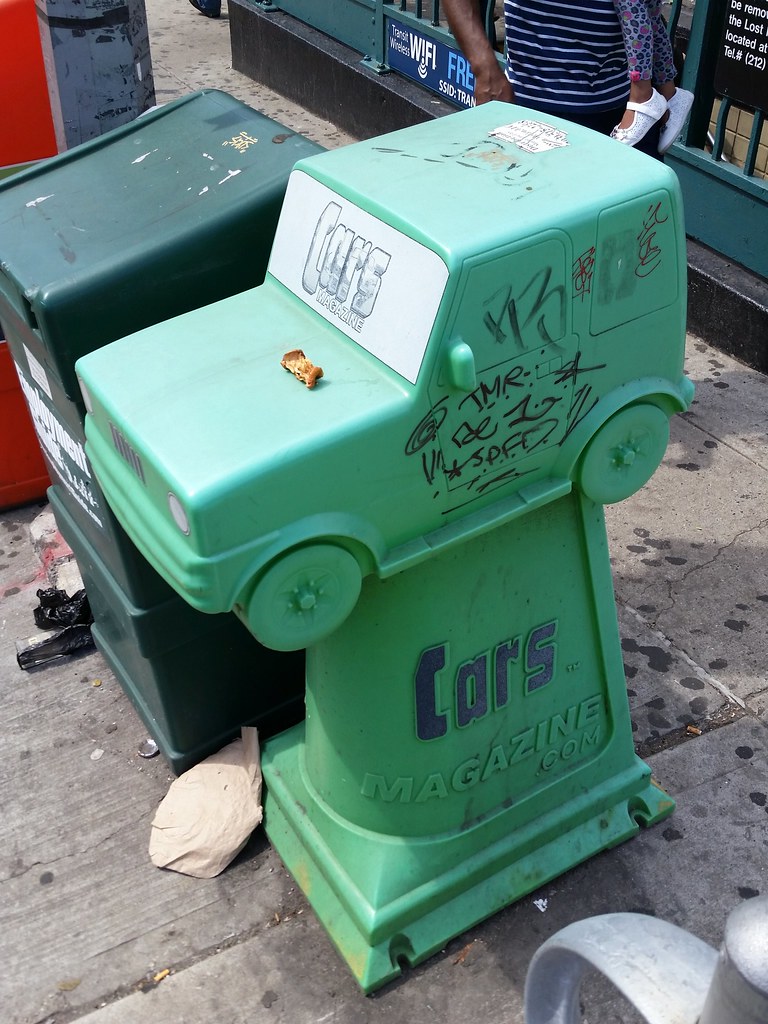 That's an apple core resting on the hood. 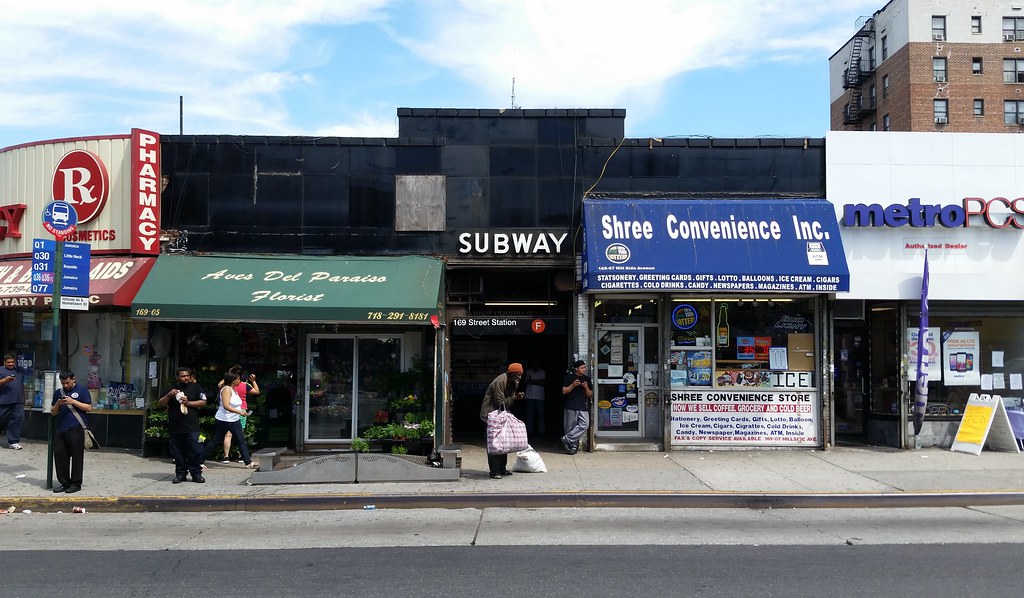 169th Street on the F train

A relentless robo-barker hawks various goods ("Any two [pairs of?] shoes for $35") and services ("Tattoo, body piercing in the back") at the 165th Street Mall in Jamaica. It's kind of mesmerizing if you just focus your attention on the short, gasping breaths tucked in between the verbal barrages.

A remnant of the Jamaica El 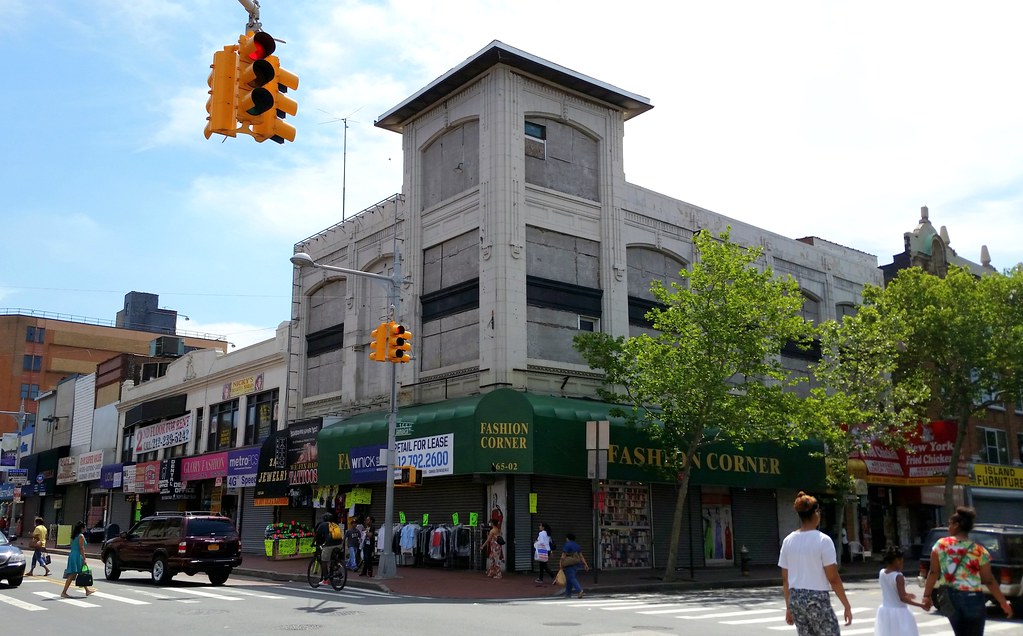 The building on the corner is a former control tower that stood beside the 168th Street terminal station on the now-demolished eastern portion of the elevated Jamaica Line. In addition to its ground-level storefronts, the building also contained an entrance to the station. 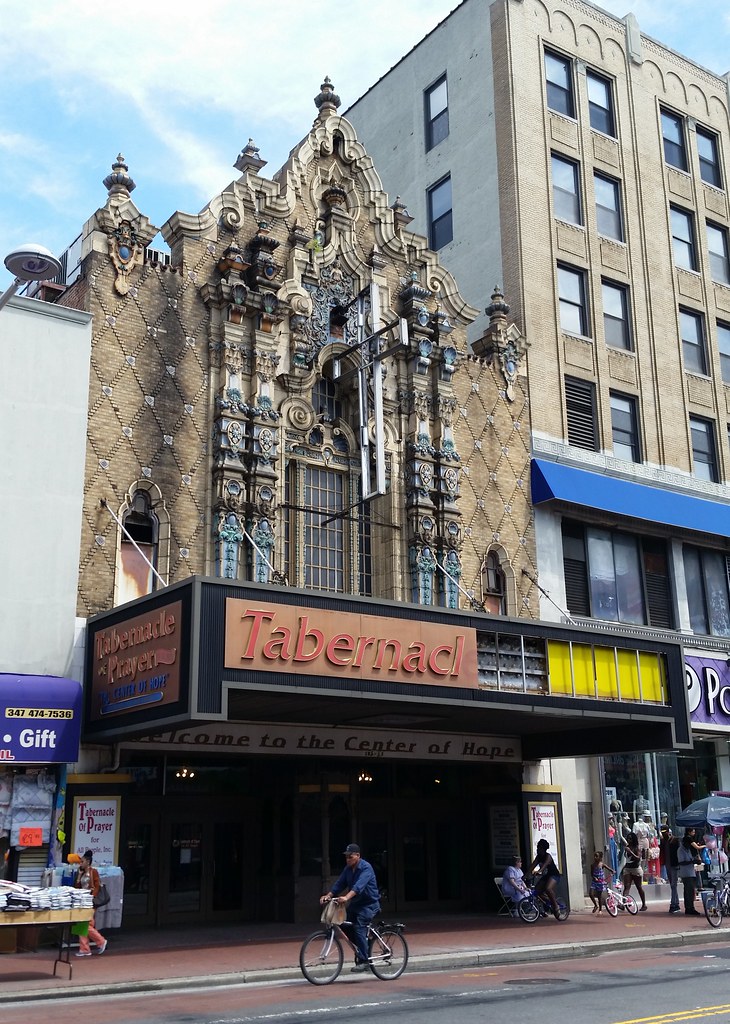 Standing here on Jamaica Avenue in Jamaica, Queens, is the former Valencia Theater, the first of the five spectacular "Wonder Theaters" opened by Loew's in the New York City area in 1929-30. (We've previously seen the other three Wonder Theaters in NYC: the Paradise in the Bronx, the Kings in Brooklyn, and the 175th Street in Manhattan. The fifth theater, the Jersey, is located in Jersey City.)

According to David Dunlap of the NY Times:

A "Spanish patio garden in gay regalia for a moonlit festival," as early publicity releases described it, the Valencia was an atmospheric theater, designed by John Eberson, in which 3,500 moviegoers at a time found themselves seated under a blue night sky filled with twinkling stars and drifting clouds. [The clouds were projected onto the ceiling.]

Rising to the sky was a Spanish village, or rather a Spanish village as envisioned by an Austrian-born architect working in the Baroque Churrigueresque style from an office in Chicago to satisfy Hollywood tastes. Around the auditorium a half-dozen diminutive structures -- a gazebo here, a loggia there -- were arrayed in cascading tiers as if set on a hillside.

That was the payoff, but the experience of the Valencia began in the gleaming lobby, where moviegoers lined up between a long colonnade and a row of scalloped balconies. From there it was into the two-story grand foyer, with a vaulted ceiling and a fish pond with tinkling fountain.

When the Valencia closed in 1977, Loew's donated the building to the Tabernacle of Prayer for All People, a Pentecostal church, which has done an outstanding job of maintaining the place over the years, as evidenced by these breathtaking photos of the interior. The Tabernacle has made a few notable alterations, however, turning the figures of nude goddesses atop the proscenium arch into robed angels, installing a massive chandelier in the auditorium, changing some of the paint colors, and displaying a collection of discarded crutches from people said to have been miraculously healed at the church.

(In case you're wondering, I took the video above during what appeared to be a bible study being held in the auditorium before the Sunday morning service.) 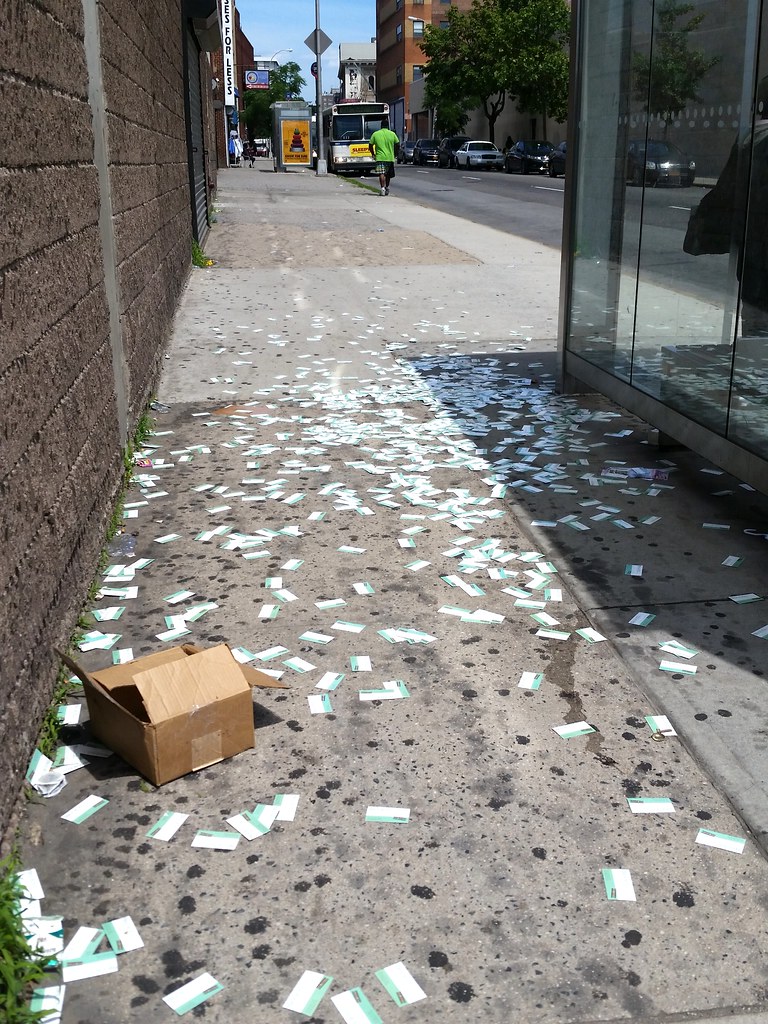 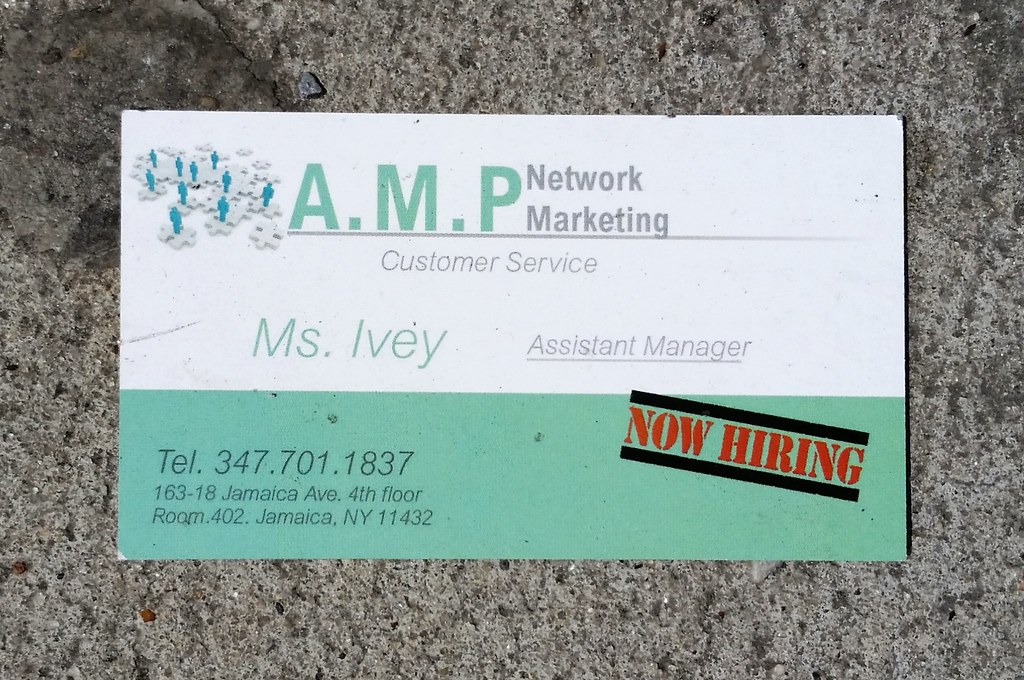 What kind of business card is this, anyway? No first name? No email or website? 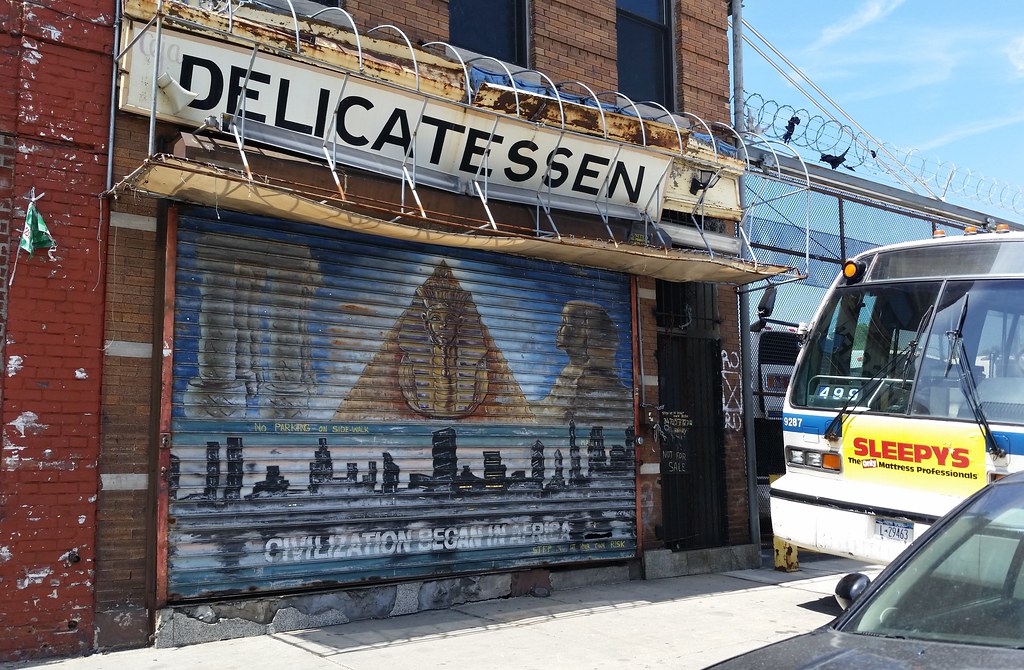 NO PARKING ON SIDE-WALK


STEP IN AT YOUR OWN RISK

The Eagle has landed 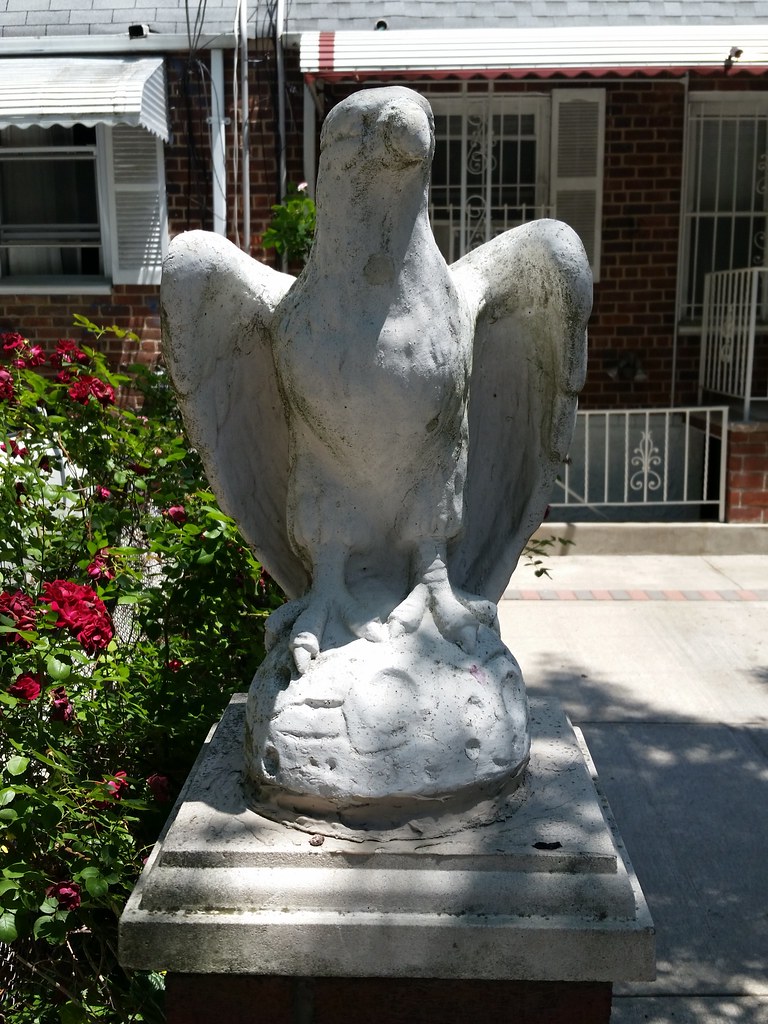 Adding some Apollonian flair to a classic gatepost guardian 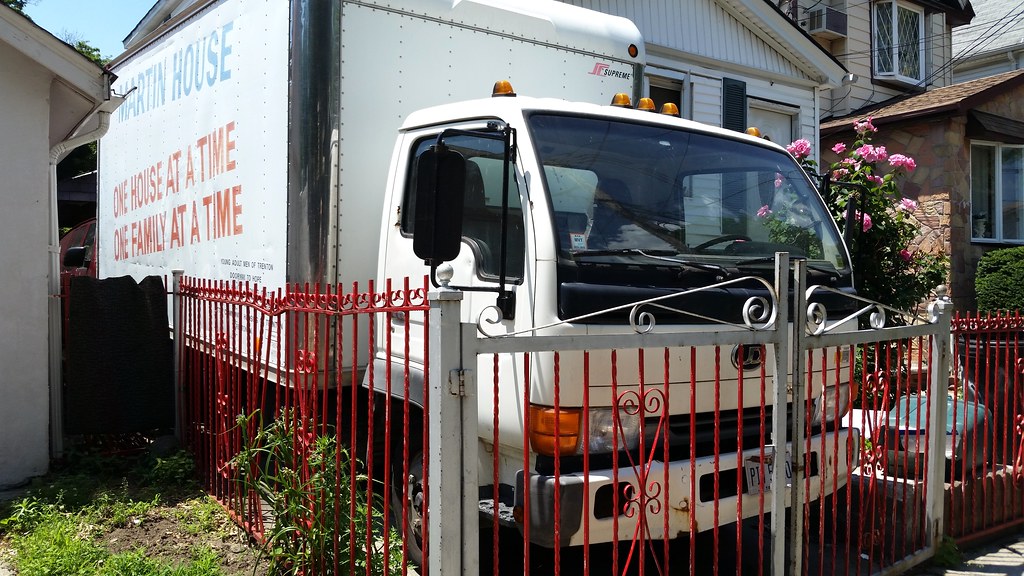 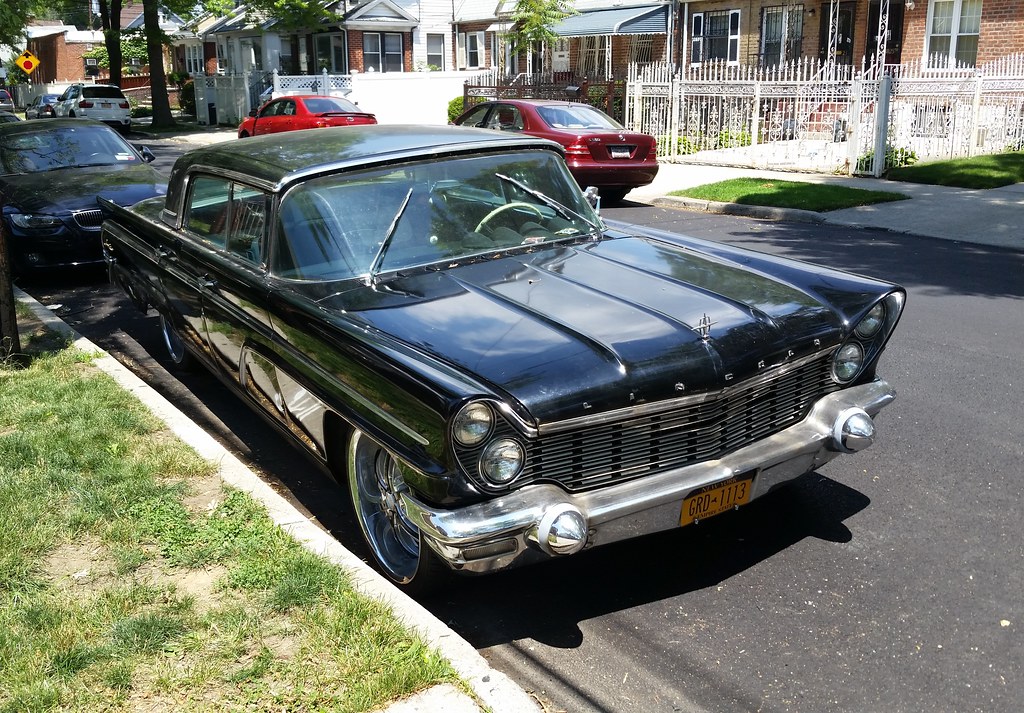 A park no more 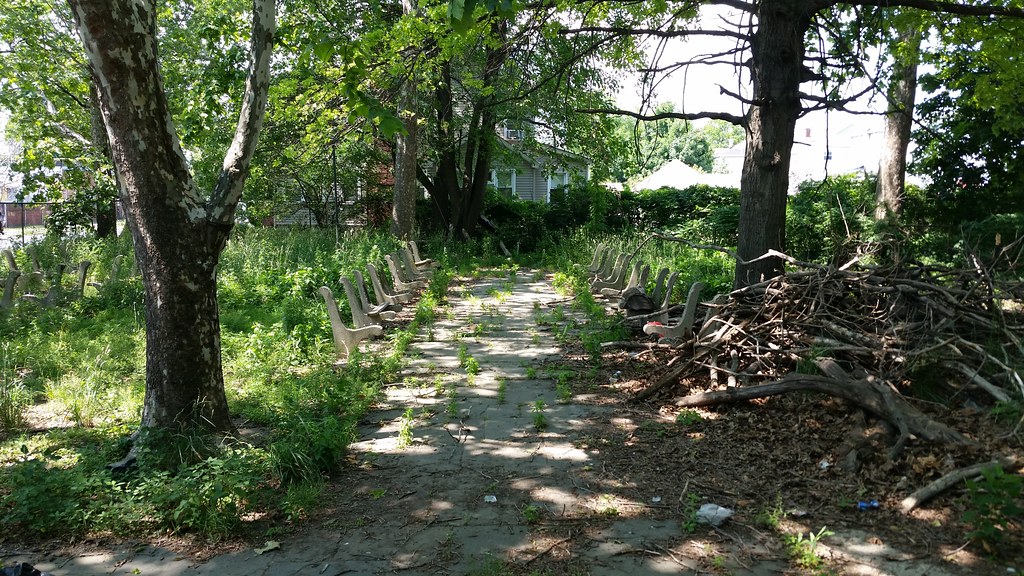 Studded with the bones of old benches, this vacant parcel of land was once a private park for an apartment complex across the street. The unusual shapes of this lot and its two neighbors to the east — the northern boundary line of the three properties runs diagonally across the street grid — can be traced back to the swath of farmland that once existed here and the dirt road that ran along its northern edge, as seen below. 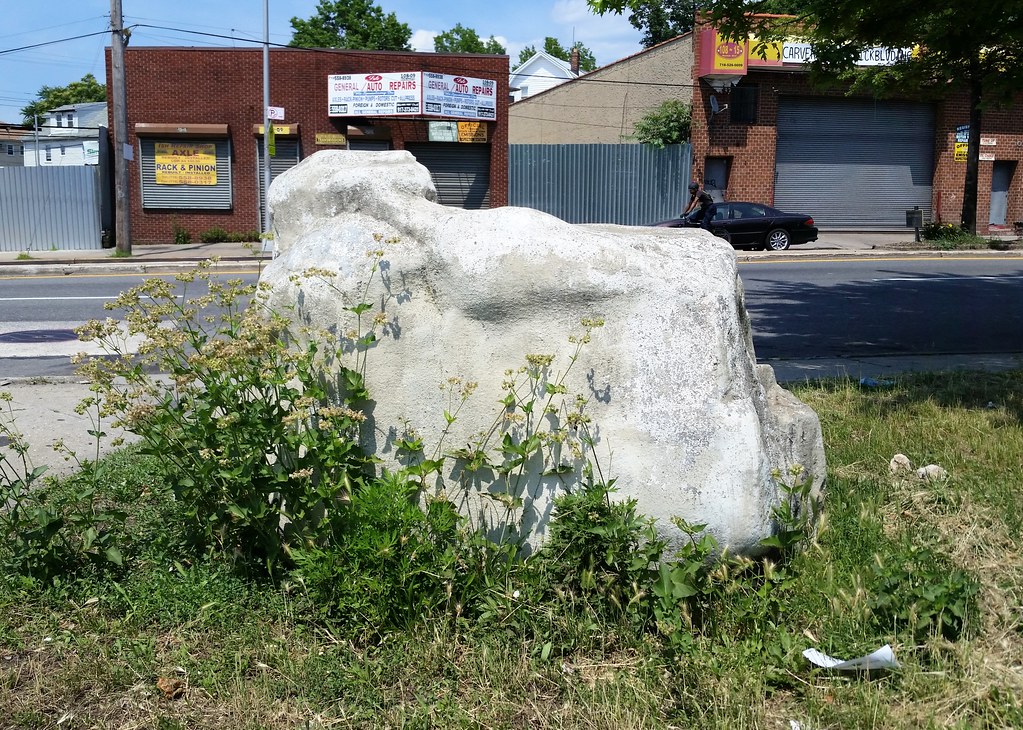 This boulder can be found at Proctor-Hopson Circle, a tiny piece of parkland in Jamaica named for John Proctor and Arthur Hopson, the first two area soldiers to die fighting for the 369th Infantry — the famed African-American regiment known as the Harlem Hellfighters — in World War I. A bronze tablet was mounted on the boulder prior to the park's dedication in 1932, but it has been removed (stolen?) in the years since.

Former portal of the day 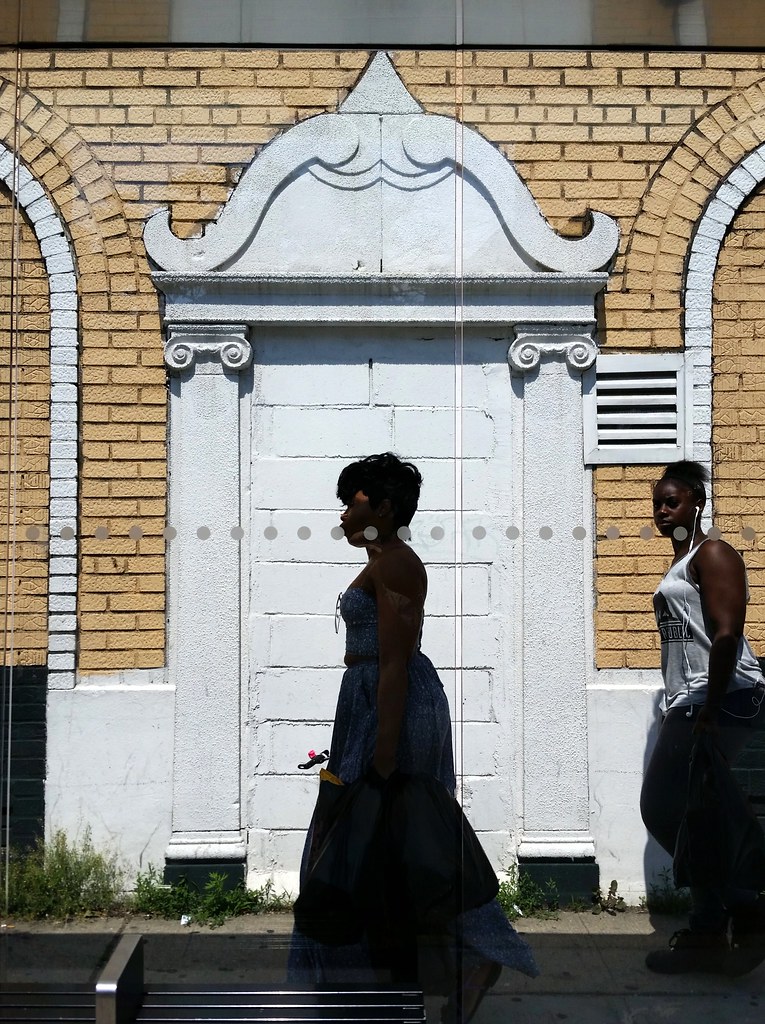 As seen through a bus stop

First Church of God in Christ 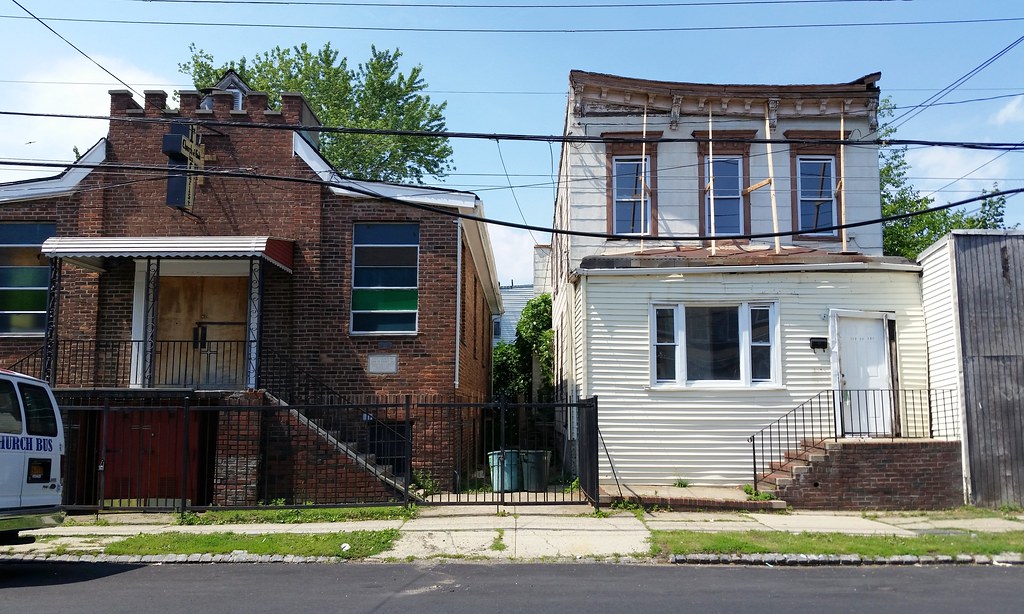 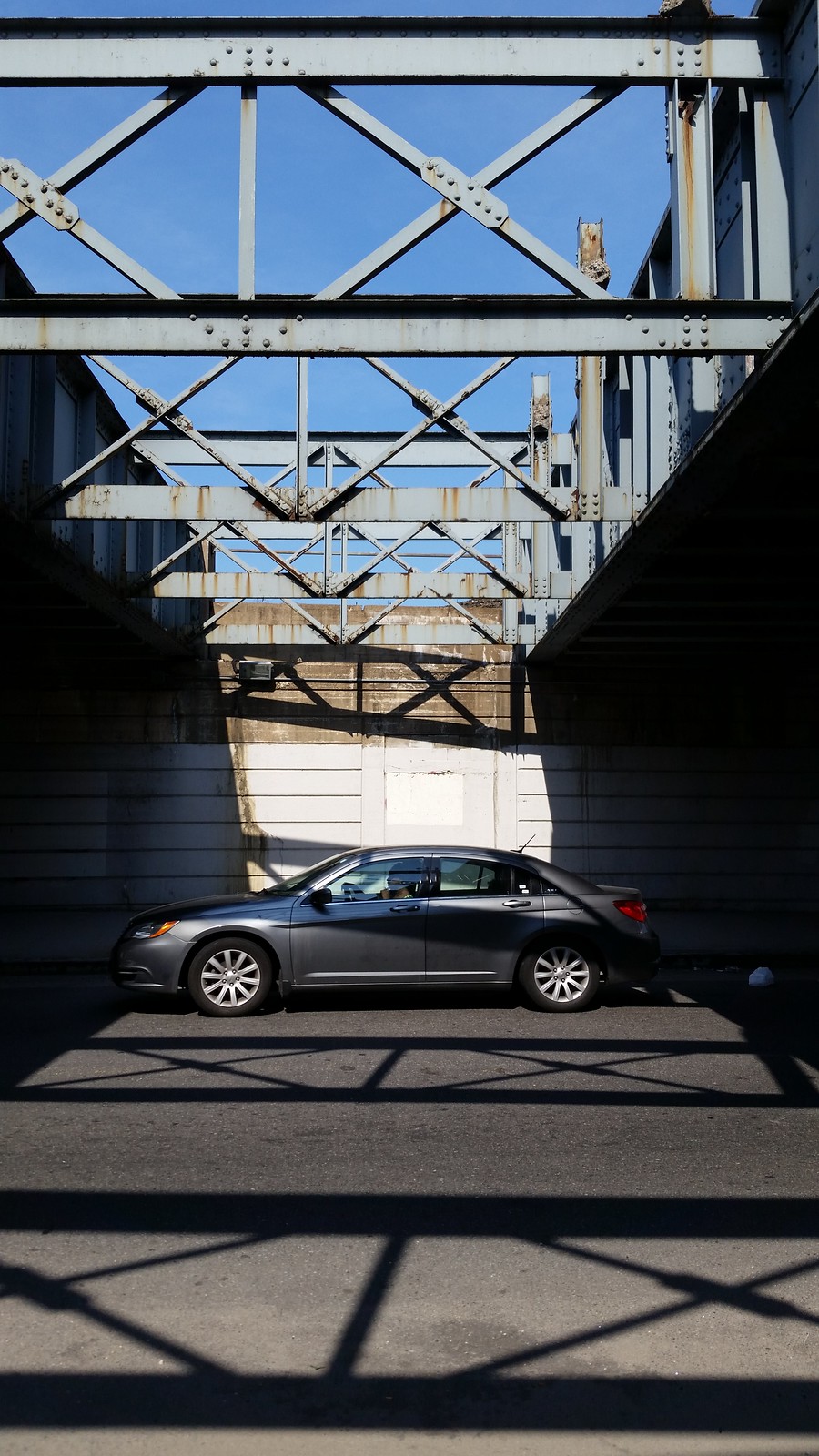 of the Long Island Rail Road 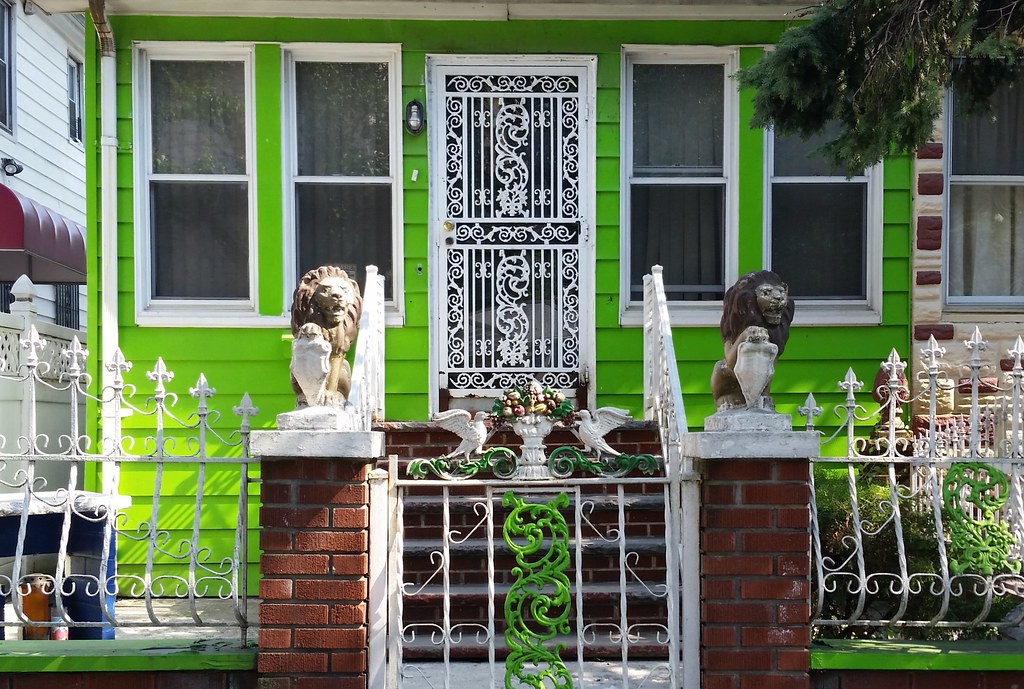 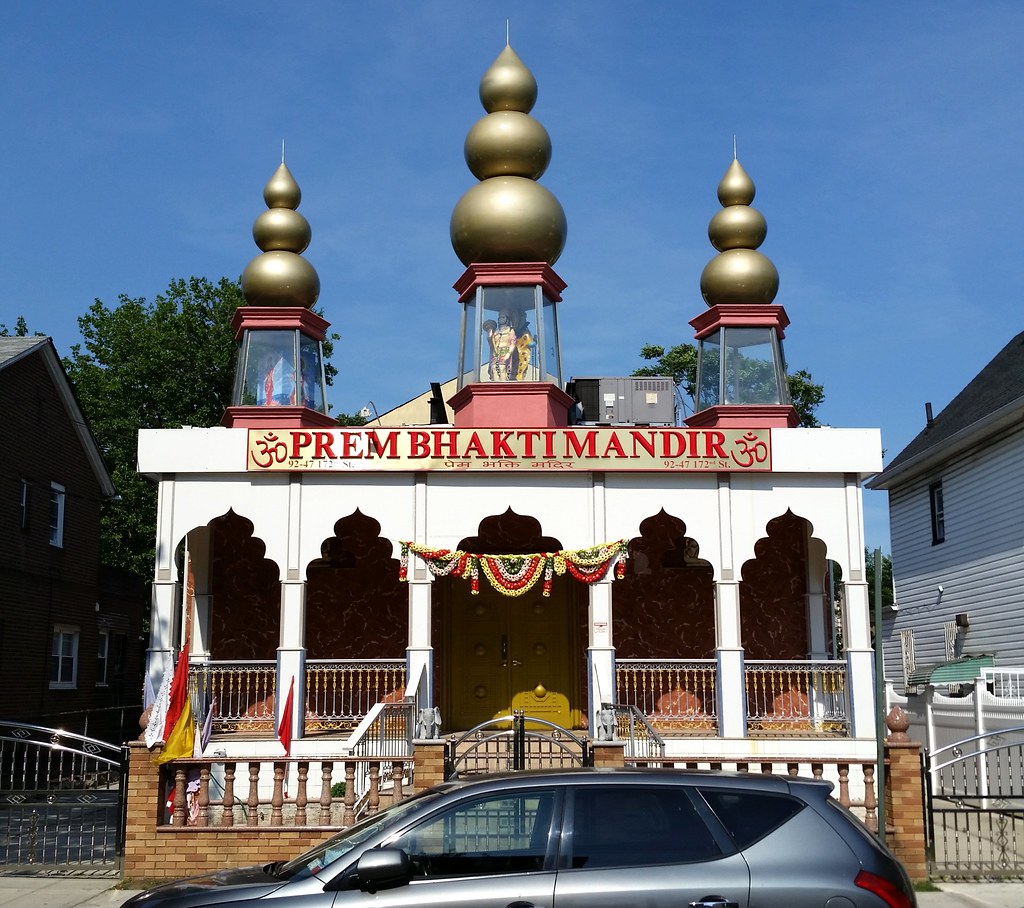 Here are a few photos from inside this Guyanese Hindu temple. 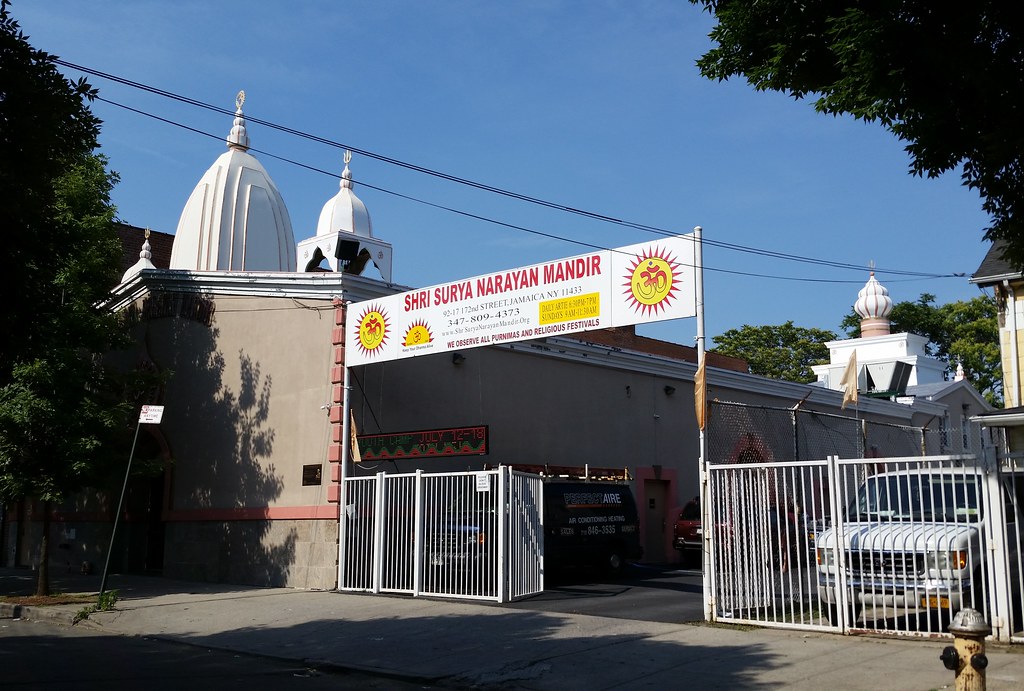 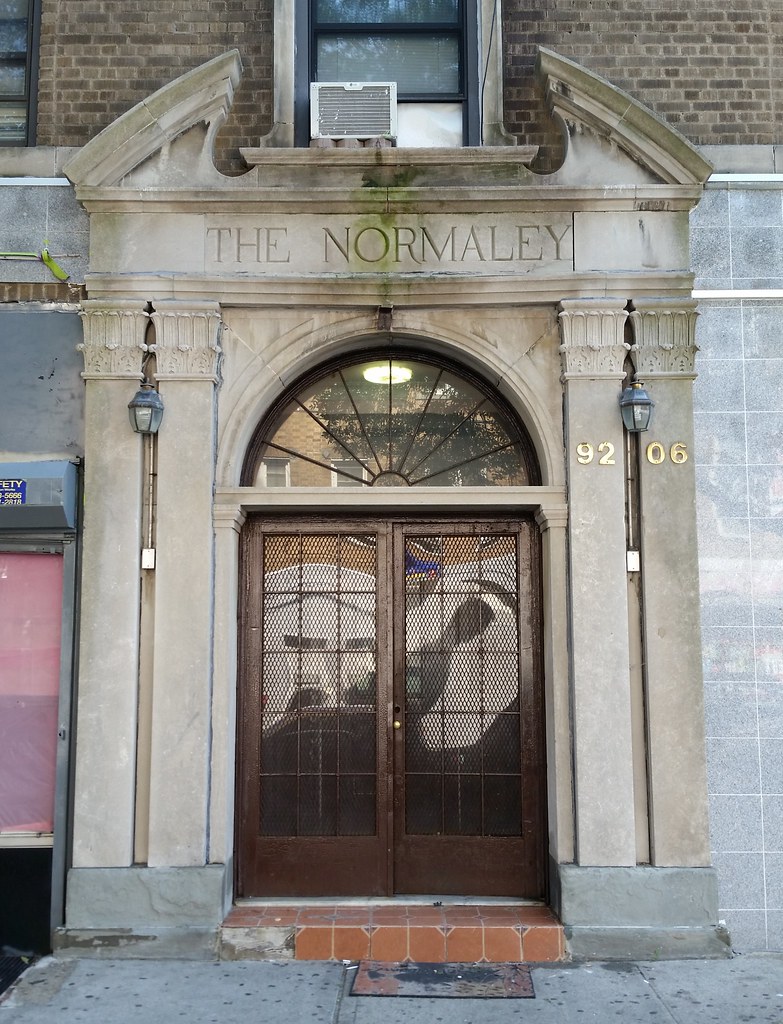 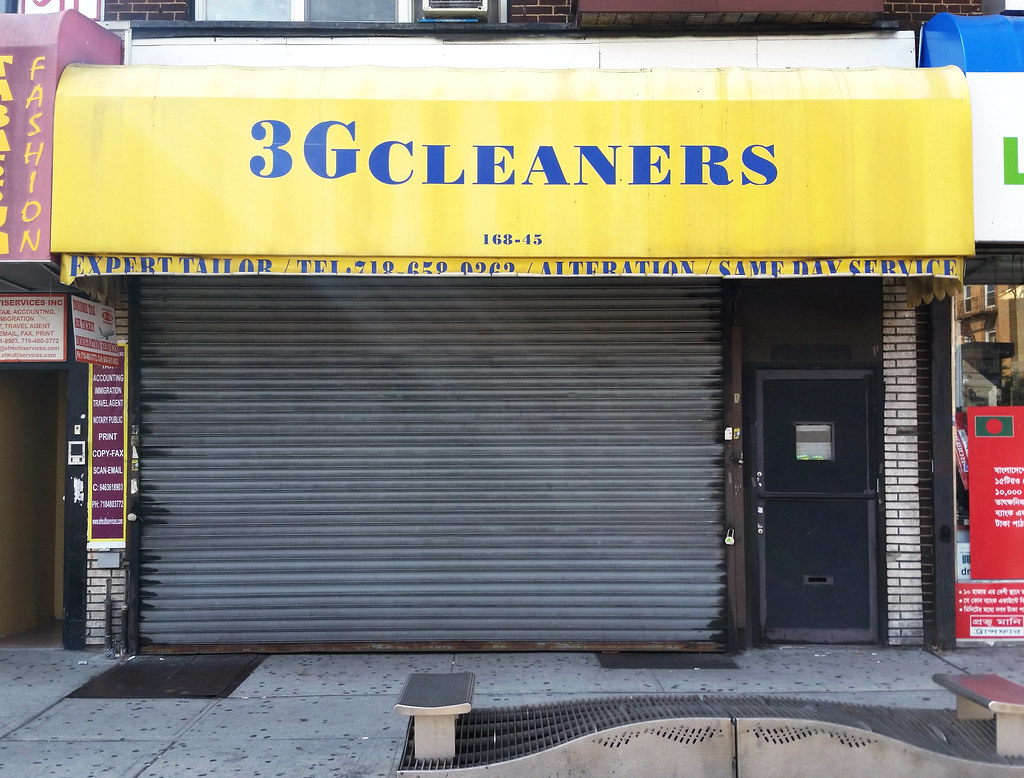 Just a block away from GGGGGG's.

Looking up the hill 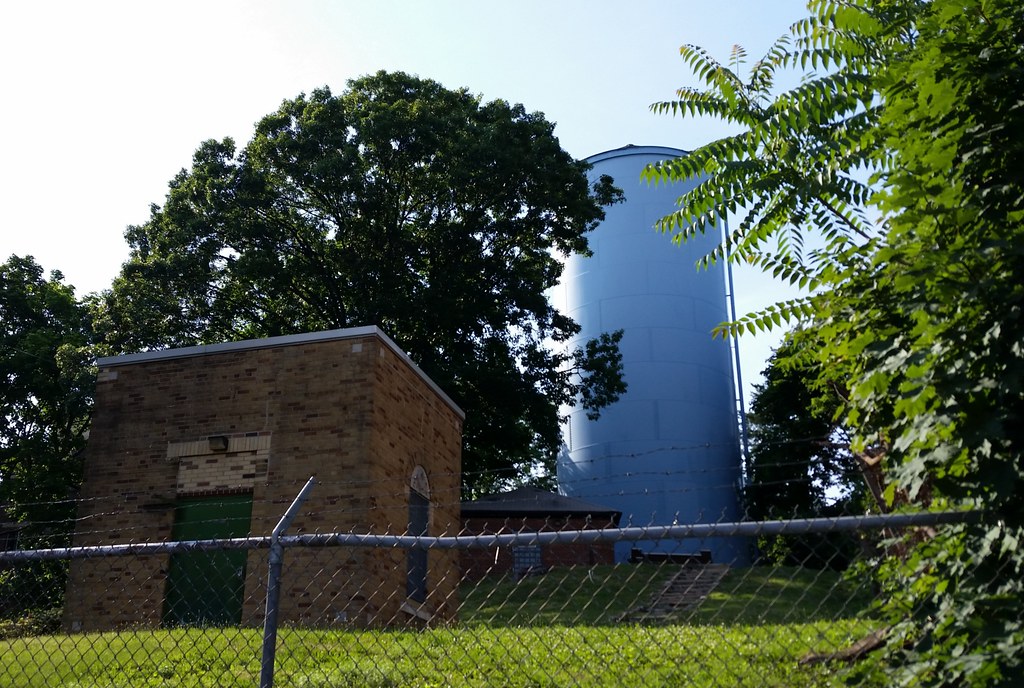 at this water tank 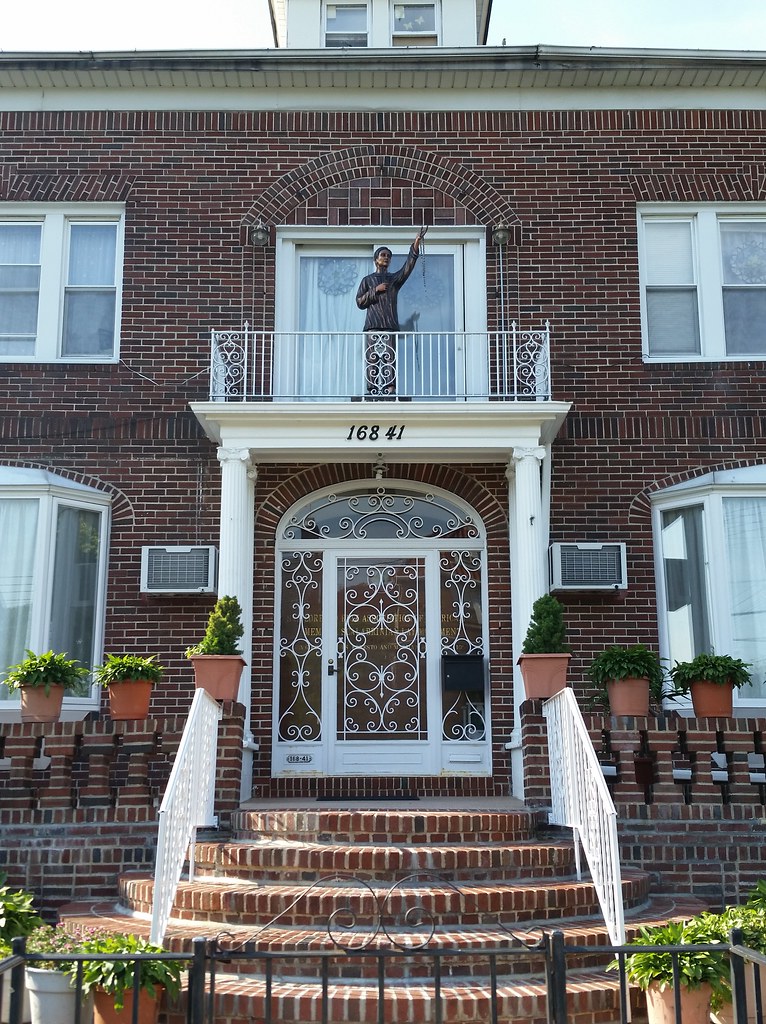 The San Lorenzo Ruiz and Scalabrini Center has apparently replaced (or perhaps recovered — I called the center multiple times to find out but couldn't get anyone on the phone) the statue of San Lorenzo Ruiz that, as we learned, was cut down at the ankles and stolen back in 2008. The feet of the old statue are still on display in the front yard, but a figure of San Lorenzo now looks out over the street from a much less accessible perch up on the building's balcony. (A statue of Blessed John Baptist Scalabrini, whose full-length robe must serve as a significant deterrent to ankle-snapping bandits, continues to stand in the front yard.) 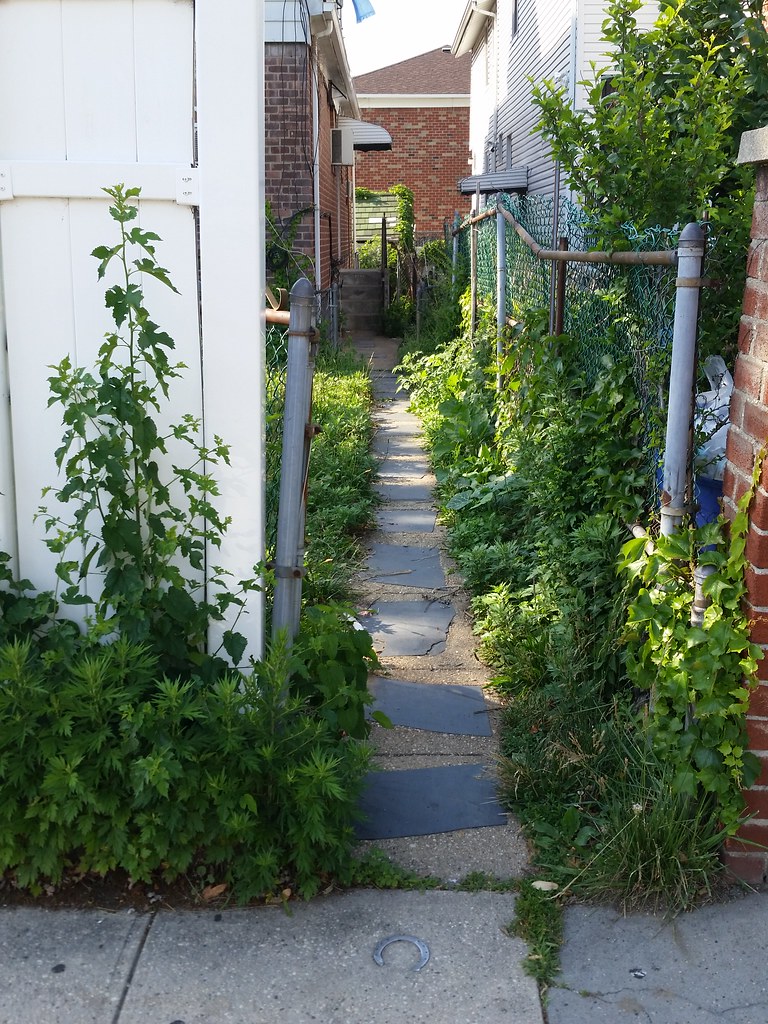