The beach and the bridge 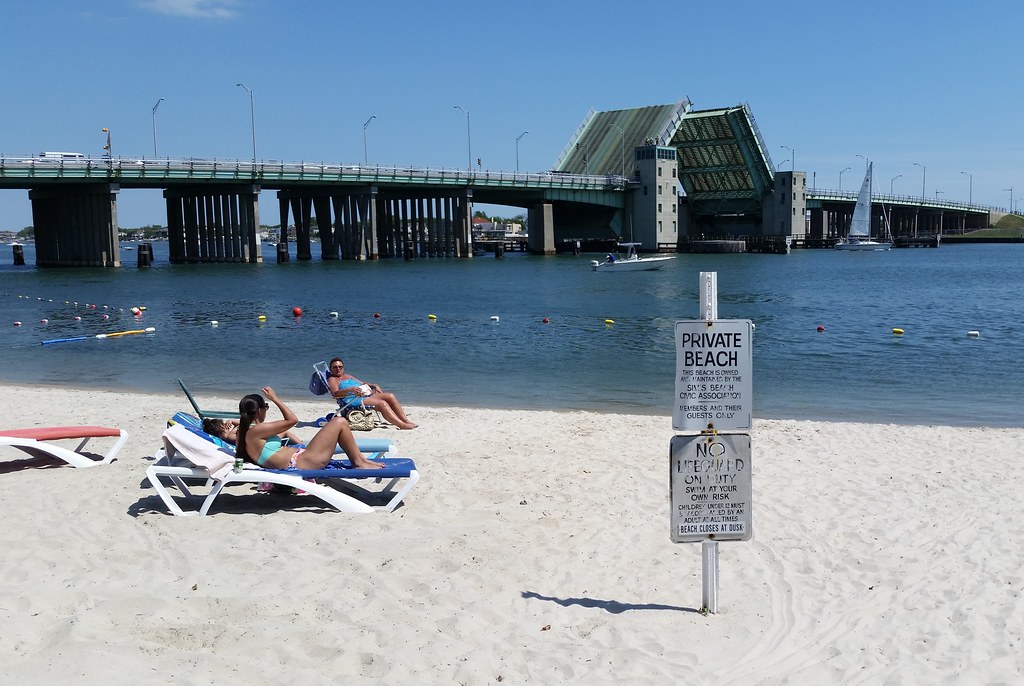 This little stretch of private beach (running about 100 feet along the shore to the left of the sign) at the southern end of Beach 3rd Street in Far Rockaway is owned by a neighborhood group called the Simis Beach Civic Association. Bordering Nassau County, it's the southeasternmost piece of dry land in NYC. (City property, however, extends another 400 feet or so out into the water from the mean high tide line. The roped-in swimming area above is actually public water.)

Standing in the background of this photo, on the Nassau County side of the border, is the Atlantic Beach Bridge, which opened to allow the sailboat at right to pass through. Completed in 1952, the bridge connects the Long Island mainland with the seaside village of Atlantic Beach. It's the only toll bridge, or toll facility of any kind, in Nassau and Suffolk counties (the non-NYC part of Long Island), and I believe it's one of only two toll facilities in the state that still have not installed an E-ZPass electronic collection system. (The other, the Thousand Islands Bridge, is currently working toward implementing E-ZPass.) The toll on the Atlantic Beach Bridge is $2 for a car; up until 1997, bikers and pedestrians were also charged to cross the bridge. Their toll? 5 cents!

The agency created to build and operate the bridge, the Nassau County Bridge Authority, is a notorious, self-perpetuating instrument of political patronage that is run "not as a business, but as a base to keep a relative handful of people in jobs that are largely make-work". A 1999 audit found that 71% of the toll revenue was being used to pay the salaries of the toll takers and the administrative staff; in other words, most of the toll collections are used to fund the collection of the tolls. (I think I'm starting to understand why the authority is not in favor of E-ZPass.)

The authority and the bridge toll were supposed to be eliminated once the bonds issued to fund construction of the bridge were paid off. And they have now been paid off — for more than 40 years. According to the former head of the Nassau County District Attorney's Special Investigations Bureau, the authority "only existed to make sure the money was paid back, but every time it was close to paying off its indebtedness, it would borrow more money".

You might think this situation would cause an outcry among the wealthy residents of Atlantic Beach, but many of them, who buy a yearly decal that lets them cross the bridge at a significantly reduced rate, are reportedly in favor of maintaining the toll. They feel that it makes their community more exclusive and serves as a deterrent against all the unsavory characters from the city who might otherwise come over and stink up the joint. From a 1996 NY Times article:

Some residents are said to make disparaging racial remarks about "those people" coming over the bridge. . . .

"We do not mind paying a reasonable toll," said Barry Ringelheim, president of the Atlantic Beach Estates Civic Association. "People feel it's a protection. God forbid somebody will come over to rob and have to go back over the bridge and be seen" by toll collectors.