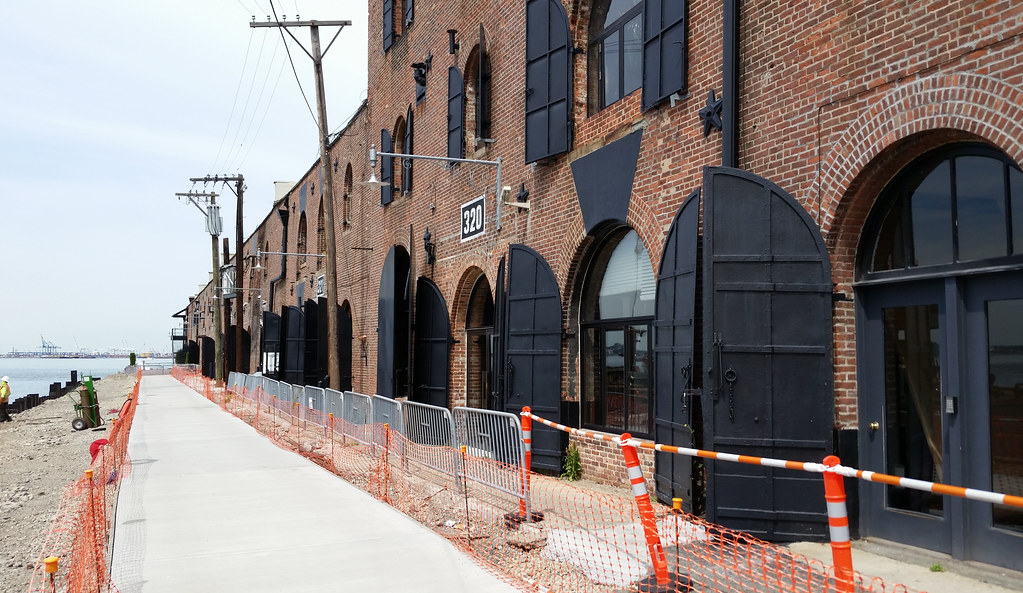 Built in 1873, these two handsome brick warehouses on Pier 41 in Red Hook are known as the Merchant Stores. They once served as "a bottling plant for the Morgan Soda (later White Rock Beverage) Company", according to the AIA Guide to New York City, and are now home to such enterprises as a winery, a glass-bending shop, and a coffee-roasting collective.

Down at the far end, in what was previously used as the residence for the cast of MTV's The Real World: Brooklyn, is an event space called the Liberty Warehouse, presumably named for its proximity to, and view of, the Statue of Liberty. I took a look at the "Information" page of the venue's website and found this absurd claim: "The Liberty Warehouse is the only location in all of New York where the Statue of Liberty is face front as she looks on to France."

1) There is nothing special about the Liberty Warehouse's location in relation to the direction the statue faces. While you can certainly see her face from the warehouse, you're not particularly close to looking at her dead-on: the warehouse is angled more than 23 degrees off the centerline of her gaze. (This fact is conveniently illustrated by the big photo of the statue, presumably taken from the warehouse, that can be found alongside the text on the "Information" page.) If you want a direct look at the statue's face from the waterfront, you'll have to head over to the foot of 42nd Street in Sunset Park, about a mile and a half away as the crow flies.

2) While Lady Liberty was a gift from the French, she was not positioned to look toward France. In fact, she faces more than 90 degrees away from Paris. In search of another way to express how erroneous the website's claim is, I decided to figure out what country she actually is staring at across the ocean. Brazil? South Africa? Whatever it is, it would surely help drive home the fact that she's not looking anywhere near France. So I pulled up a map, plugged some coordinates into these handy tools, and discovered that after crossing the Atlantic, her gaze makes landfall in the nation of... France. Not the mainland in Europe, of course, but the overseas department of French Guiana in South America. So I suppose the "looks on to France" part of the website's claim is technically correct. Damn!

(The "Information" page mentioned above also claims that the warehouse was "constructed in the pre-Civil War 1850’s". I'm no expert on the subject myself, but I'd say the AIA Guide, which provided the 1873 date I gave above and specifically states that the Merchant Stores and other similar warehouses in the area were built after the Civil War, is a far more trustworthy source on the matter than the Liberty Warehouse people.)