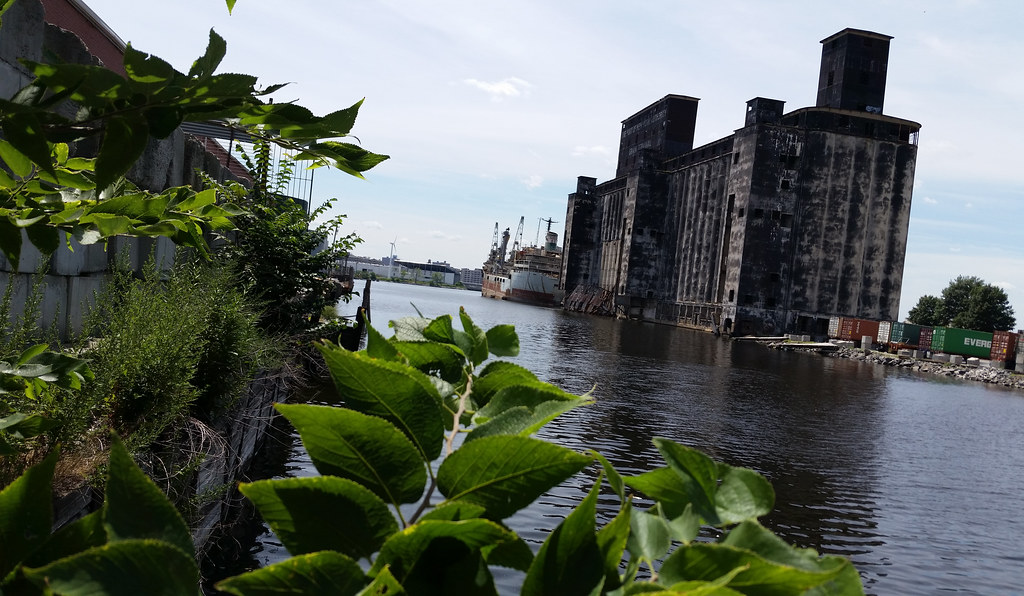 The hulking structure looming above, blackened with age, is a two-million-bushel grain elevator opened here on the Henry Street Basin in 1922 as part of the New York State Barge Canal's Gowanus Bay terminal. The elevator was built to facilitate the transfer of grain from barges (arriving via the canal system) to ocean-going steamships.

While the canal system and the elevator were "magnificent works of engineering", according to an expert quoted by the NY Times's Christopher Gray in his piece about the elevator, they were also "magnificent boondoggles" that failed in their attempt to recapture grain and other freight traffic that had been lost to railroads in the years since 1880. The elevator was deactivated in 1965 and has been vacant for half a century now.

You can see an old photo of the elevator and its since-demolished conveyor structures here, and you can check out some current-day images of the abandoned interior here.

(Visible in the background [zoom in] is the city's first large-scale wind turbine, which generates power for the Sims Municipal Recycling facility in Sunset Park.)

UPDATE (Mar. 14, 2017): R.I.P. Christopher Gray, "the David Letterman of architectural history". Your Streetscapes column has long been an invaluable source of information and inspiration. Thank you for all that you've done!