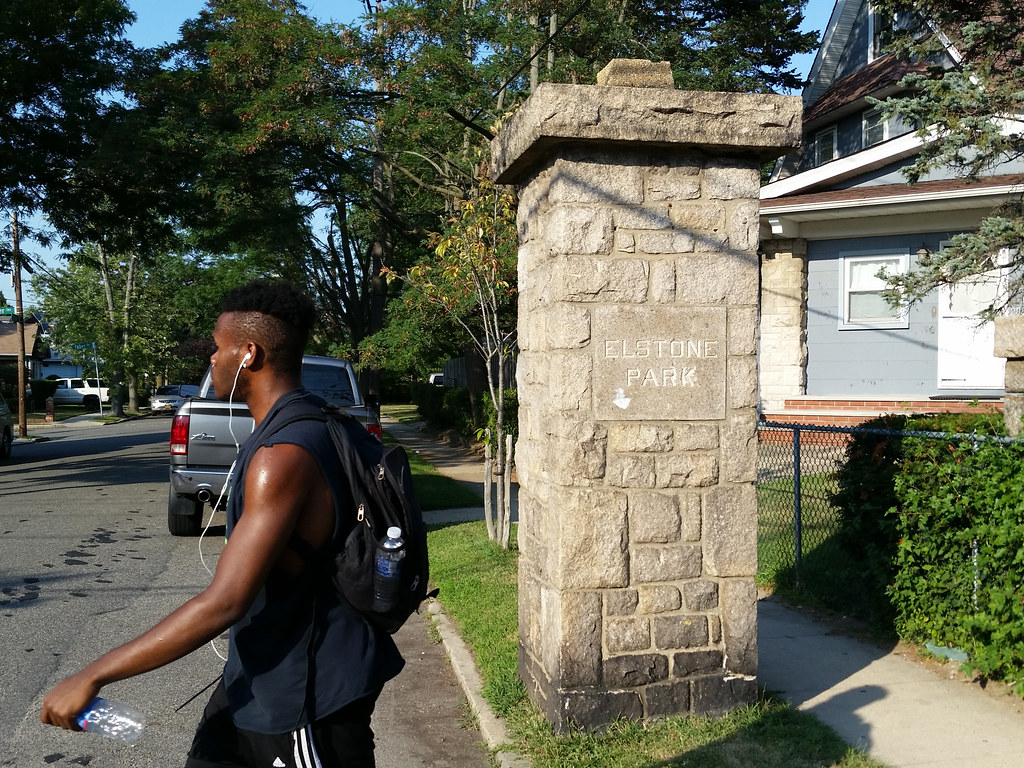 Elstone Park was an early-20th-century residential development here in Bayswater. As far as I can tell, its first houses were summer cottages that were rented out starting in 1906. Sales began in 1908, when the "substantially and artistically constructed" furnished cottages were put up for auction, along with "large villa plots" for buyers who wanted to build their own homes.

The Elstone Park Realty Company also thoroughly remodeled the nearby Bayswater Hotel, which had been closed for some time, and reopened it as the Elstone Park Hotel in 1908. According to some newspaper ads from 1912, the new and improved hotel had much to offer its guests, including unsurpassed cuisine, high-class cabaret, bridge whist, and Japanese servants.

The hotel seems to have been a social hub for the community as well, hosting such events as an "old-fashioned country dance", a "fancy dress dance" at which prizes were awarded for "the prettiest, most original and most grotesque costumes", and weekly Friday-evening "amateur nights" that "opened a new field for the young genius[es] who desire to acquire fame in the footlight world".

One unusual remnant of Elstone Park exists in the form of an odd midblock traffic circle on Granada Place, just down the street from where I took this photo. Today the circle is home to a modest assortment of grasses, trees, and shrubs, but it was once the site of an elaborate fountain, reportedly lit up in the evening by colored electric lights, that was built as a centerpiece of the development. You can see an old postcard image of the fountain here. And this postcard features a view down Granada Place (then known as Summit Drive) from around the same location as my photo above. You can see the fountain in the background, and you can also see the stone pillars that are still standing today, the taller of which were apparently once topped by ornate lamps.

In 1912, William S. "Big Bill" Devery, a former NYC chief of police (from 1898 to 1901) and an owner of several Elstone Park houses, took the head of the Elstone Park Realty Company to court for removing four statues of goddesses from the fountain. I was surprised to find such a seemingly mundane dispute covered in a number of different newspapers, and, in a couple of cases, in such an enthusiastic and over-the-top fashion that I couldn't even tell for sure which parts were meant literally and which were jokes.

It turns out that Big Bill had long been a favorite subject of the press. He was a juicy target during his days with the police department, a brazenly corrupt chief growing wealthy off of graft money. At the same time, his colorful, quotable, "picturesque" personality endeared him to the very reporters trying to take him down. As the crusading journalist Lincoln Steffens once put it: Devery was "no more fit to be a chief of police than the fish man was to be director of the Aquarium, but as a character, as a work of art, he was a masterpiece."

Devery was also an original co-owner of the New York Highlanders, the baseball team now known as the Yankees. He and his partner owned the franchise from 1903 to 1915, and legend, if not established fact, has it that he gave the team its famous N-superimposed-on-a-Y insignia, borrowing the design from an old police medal of honor (photo) created by Tiffany & Company.