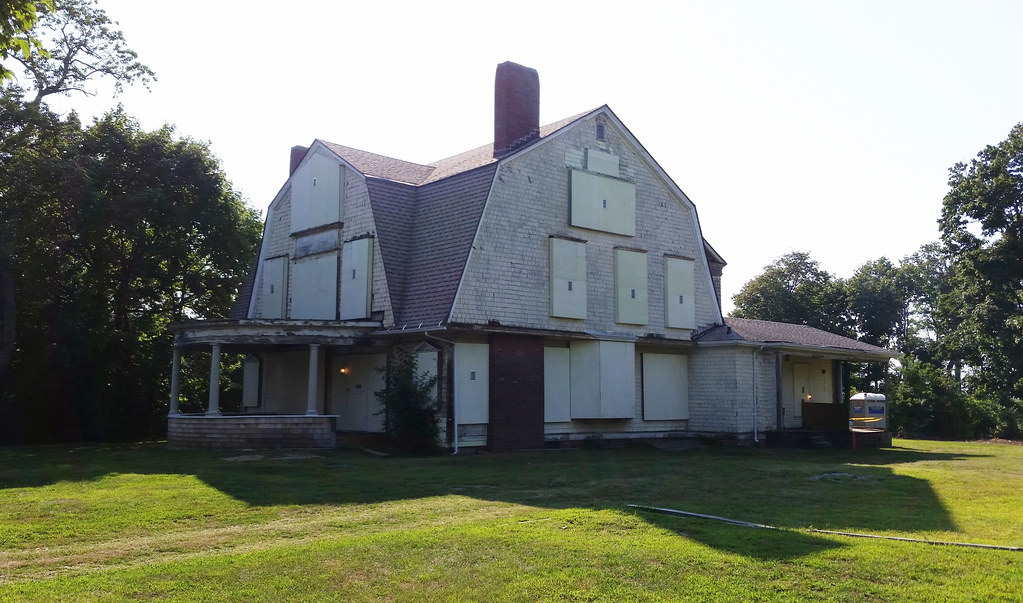 Now part of Bayswater Point State Park, this "circa 1900 shingle-style house" was reportedly once an inn; the name "Sunset Lodge" can still be found on its gateposts.

The last person to own the property was Victoria Greenidge, a wealthy recluse who bought the place with her husband Joseph in the 1940s. The couple outfitted the house with "fine furnishings and antiques" but never actually moved in, residing instead in a guest cottage around back. They began hoarding newspapers and filled the cottage with so many towering piles that there were only narrow "channels" of open space remaining for getting around from room to room.

In the years after Joseph died in 1972, Victoria began slipping into senility. In her vulnerable state, she fell victim to an "allegedly criminal pattern of undue influence by a succession of lawyers, workmen, housekeepers, advisers and helpers" looking to get their hands on her money. Despite her considerable financial resources, a 1980 NY Times article found her living a "pauperlike existence" in a nursing home at the age of 78 or 79.

Following her death in 1985, Sunset Lodge and the surrounding land were handed over, in accordance with her wishes, to the Audubon Society, which later sold the property to the state parks agency. The house, thoroughly looted and vandalized by the time Victoria passed away, has stood vacant ever since.

There is a glimmer of hope for the place, however, as the state recently dedicated $80,000 to stabilizing the structure. Thinking optimistically, the local city councilman in 2010 proposed turning the house into a bed-and-breakfast, but I imagine it will be quite difficult to come up with the money for a full renovation.