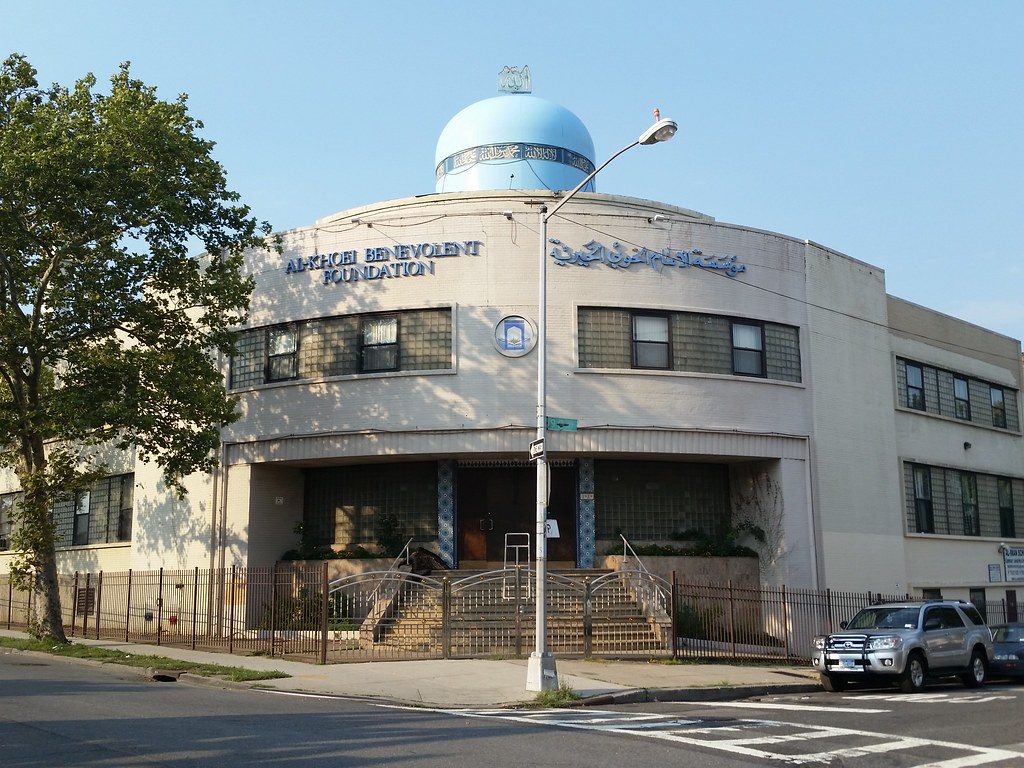 The Imam Al-Khoei Benevolent Foundation, "one of the largest Shiite Muslim charitable and educational associations in the world", was founded in 1989 by Grand Ayatollah Abul Qasim al-Khoei, "the highest-ranking cleric in Iraq" prior to his death in 1992.

The Islamic center pictured above is the New York branch of the foundation and is home to "New York City's main Shiite Muslim mosque". The center is located in the former I.D. Watch Case Company factory, which has stood here since 1944. You can see an old photo of the factory here.

On January 1, 2012, with dozens of worshipers inside, the center was hit by the "Frappuccino Firebomber", a man with an odd array of grudges who sought vengeance that evening by tossing Molotov cocktails — most of them made with Starbucks Frappuccino bottles — at a series of five unrelated targets. Fortunately, no one was injured in any of the attacks. When questioned by the police, the man expressed a general hatred of Muslims, but also gave a more personal reason for singling out the Al-Khoei center: He had once tried to use the center's bathroom and was turned away. (Another one of his targets was a deli he had visited a few days before. He was angry at the way the owner had kicked him out after he was caught shoplifting milk and... a Starbucks Frappuccino.)

Two police officers who drove by as I was snapping this photo stopped to question me, suspicious that I might be planning to do some kind of harm to the Al-Khoei center. I explained to them that I'm walking all the streets of the city and that I take lots of pictures.

"What do you take pictures of? Mostly mosques?" one of them asked me, still somewhat wary.

"No, all kinds of things. Here, I'll show you." Sensing an opportunity to bore their suspicion into oblivion, I began enthusiastically flipping through my recent photos on my phone. "Here's a sign that got swallowed up by a tree. Check out this old Indian Head penny I found on the ground. It's from 1906! Here's a funny homemade dog poop sign. This sign with a Bible verse was just stuck up above the door of this building. This is Fresh Kutz, K-U-T-Z. I take a photo of every barbershop I see with a Z in its name in place of an S. Look at the birds painted on this SUV!"

It was around this point that the officers' eyes began to glaze over. They were basically stuck watching the world's most tedious vacation slideshow. Realizing that I wasn't going to run out of photos anytime soon, they suddenly became very eager to wrap up the conversation and get on their way. They offered up some hasty goodbyes and promptly sped off, hoping to hell they could get out of earshot before I had time to pull up all my churchagogue and mailbox photos.