The mystery of the auto shop awning 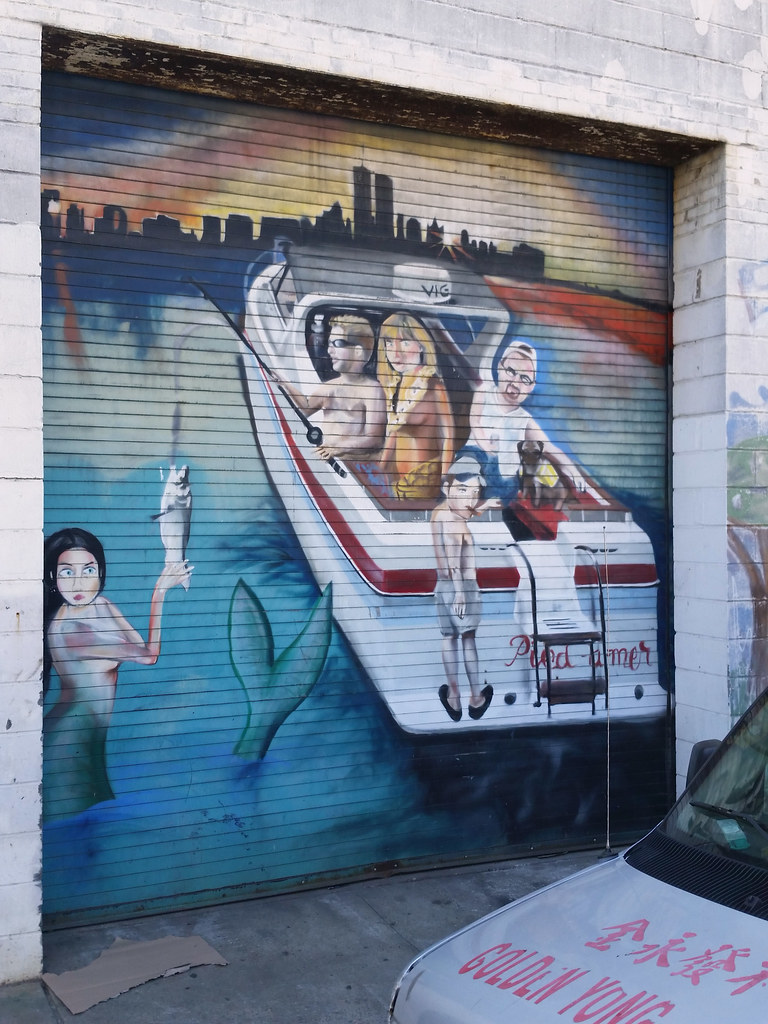 Here's a better-lit look at Flushing's Pied-a-mer mural, painted on a roll-down gate at an auto repair garage.

My usual practice, after taking a photo like this with no identifying information, is to snap a quick shot of something nearby with a business name/street name/address to help me figure out where I took the photo in case my phone got the location wrong.

In this instance, the brainless shot I took next captured the awning over a door to the garage, just to the left of the mural. I didn't process what I was looking at when I snapped the picture, but it later struck me as odd when I was sitting at my computer, reviewing the day's photos: the awning says "Rodolfo Valentin" in fancy lettering that feels quite out of place at an auto shop. 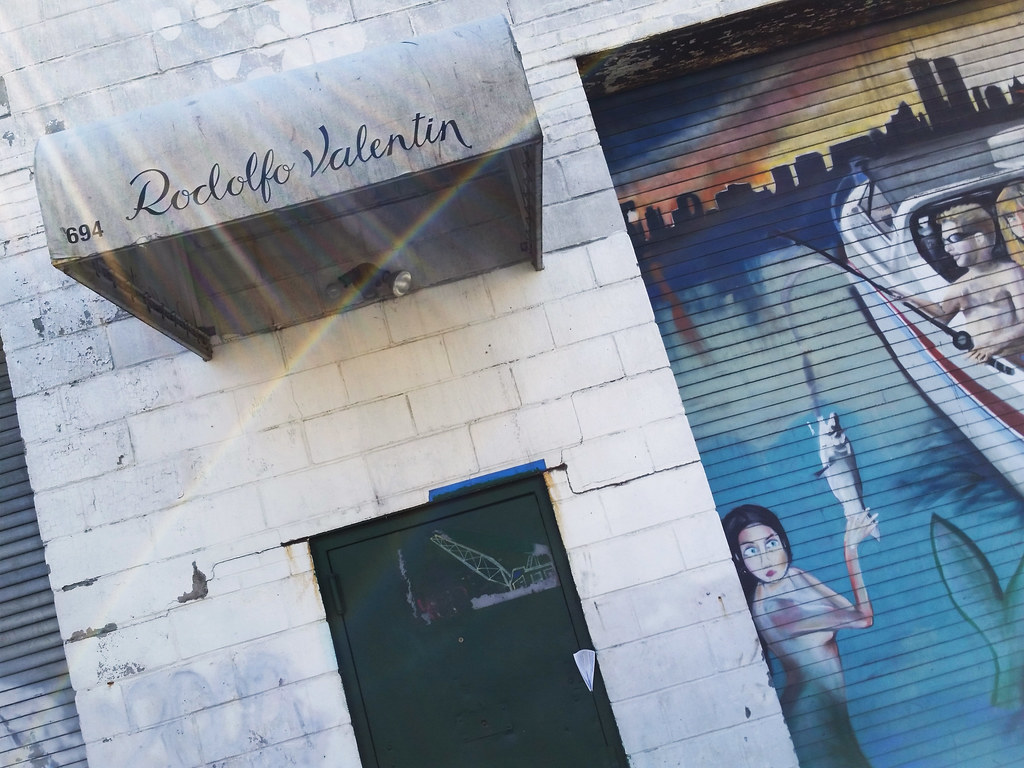 Rodolfo Valentin — that name sounded familiar to me. It turns out I was thinking of Rudolph Valentino, but there is a well-known South American hairdresser in New York named Rodolfo Valentin, a specialist in wigs and extensions whom New York magazine described as "Argentina’s answer to Fabio". He looks like this. (If you need more, you can watch his 2012 New Yorker of the Week interview with NY1.)

But could that Rodolfo Valentin possibly be the same one whose name is on the garage awning? What could a high-end Manhattan hair stylist have to do with a grimy repair shop in Queens?

Hoping to make sense of all this, I figured I'd search the internet for some connection between Mr. Valentin and the garage's address. When I checked the awning for the building number, however, I realized something was off. The number on the awning is 694, but buildings in Queens have dashes in their addresses. The actual address of the garage, for example, appears to be 41-10 Fuller Place.

A search for "rodolfo valentin 694" revealed that there was, for a number of years, a Rodolfo Valentin salon located at... 694 Madison Avenue, on the Upper East Side. And if you visit that address in Street View, you'll see that the salon's signage featured the same cursive font that we find on the awning here at the garage.

There was even a period around 2010-2011 when the salon's color scheme matched the awning. (You may notice that the sign above the door during this era gave an address of 696, not 694. While the entrance to the salon was at 694 Madison Avenue, the salon itself occupied the connected second floors of both the 694 and 696 buidings.)

But there's no photographic evidence I could find of an awning in place at the salon. All the Street View photos through the years just show a flat sign above the door. (The salon that previously occupied the space did have an awning, however.)

It would seem, then, that the awning either was never actually installed at the salon or was used for a relatively short period of time and went unseen by the Street View car. Whatever the case, we're still left wondering how the thing ended up here in Flushing.

Let's now take a Street View visit to the repair shop. Glancing around, you'll see that the garage stands among a cluster of other blue-collar businesses in an area I described in a previous post as "a hotbed of Queens chrome". When I looked back at that post, I noticed something: the Queens chrome shop pictured in the post advertises that it also makes signs and awnings. Using Street View, I was then able to find a few other awning-makers within a block or two of the garage.

So here's a theory. Back in 2009 or 2010, during the process of relocating from 1020 Madison Avenue to 694 Madison, Rodolfo's salon contacted one of the businesses near the garage and ordered an awning to replace the one used by the previous tenant. But for one reason or another (Rodolfo decided he preferred an uncovered entrance, there was some dispute over quality or payment), the salon never took possession of the awning.

Meanwhile, the owner of the garage wanted somewhere to smoke a cigarette when it was raining outside. A sign shop around the corner, which gets its trucks serviced at the garage, had this extra awning that some prettyboy Madison Avenue hairsmith didn't want, and so a deal was struck. And now we have a Rodolfo Valentin-branded smoke shelter outside a grease monkey's cinderblock shanty in this obscure corner of Flushing. 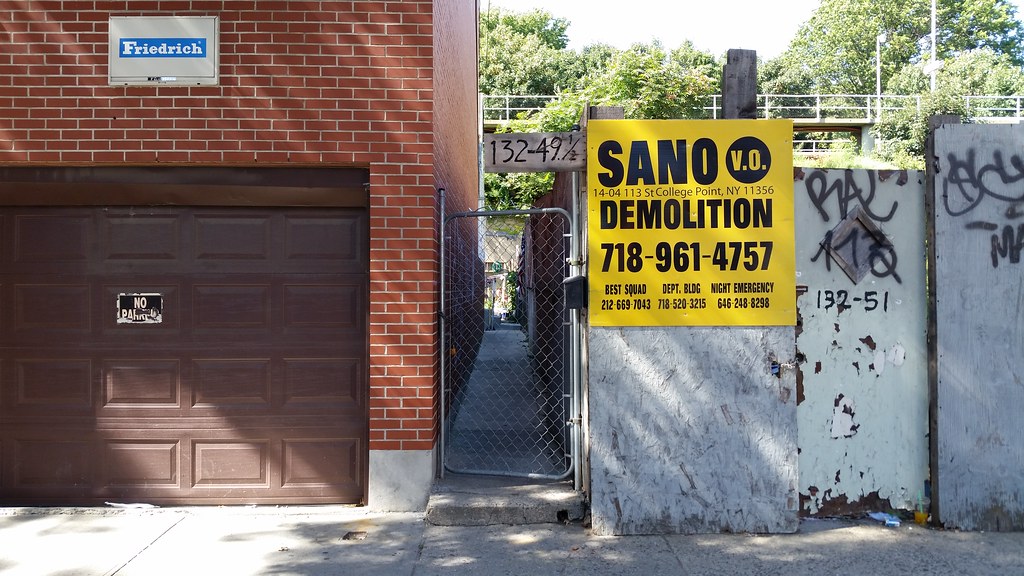 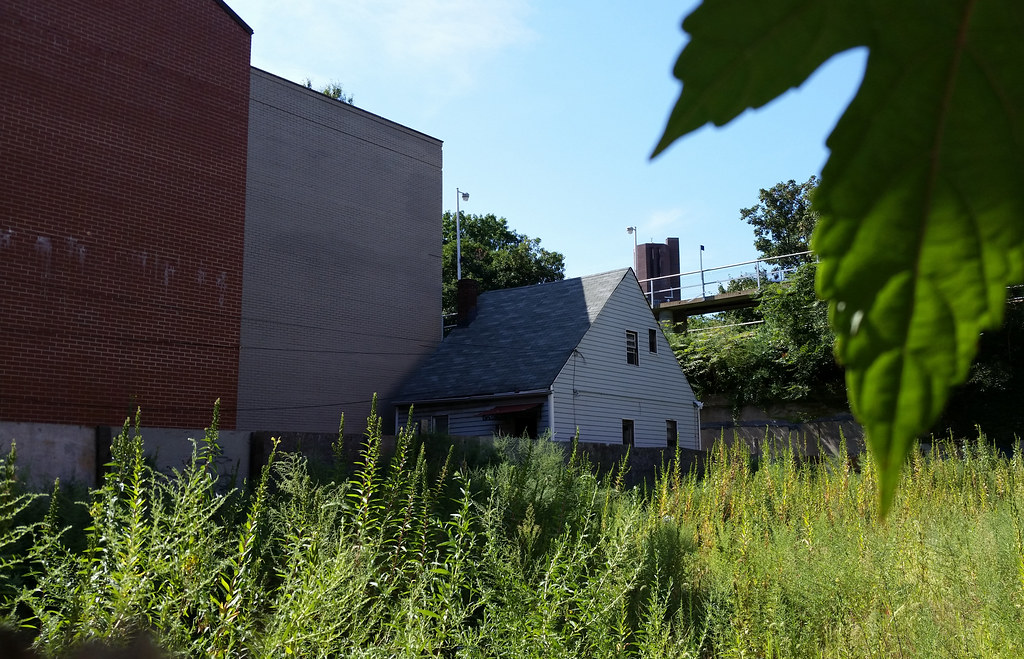 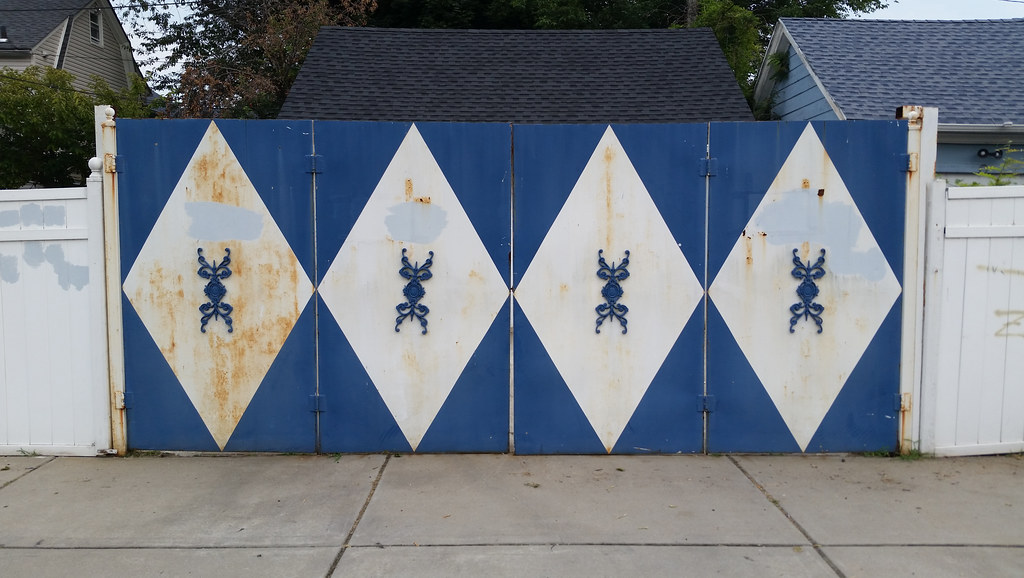 In memory of what wuz 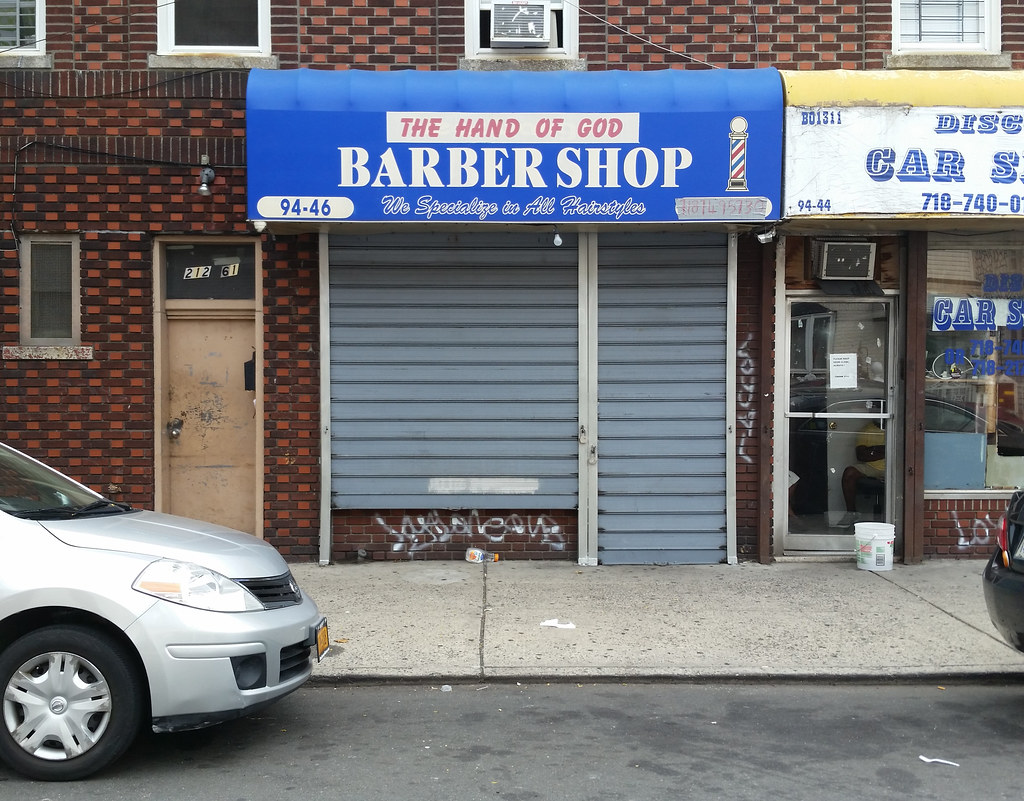 This awning was erected not by The Hand of God, but by a different barbershop that was previously located here. The white strip with "THE HAND OF GOD" printed on it in red is simply a decal stuck on top of the earlier establishment's name.

Employing a sophisticated technique that involved standing in front of the awning and staring at it for an exceedingly long time, I was eventually able to make out the name of the original barbershop. While the photo above doesn't appear to reveal much, the image can be manipulated to at least partially expose the former name lurking beneath the current one: Headbangaz.

It's always sad to learn of a death among the rankz of the city'z barberz, but the Bible reminds us that just as the hand of God giveth, The Hand of God taketh away. 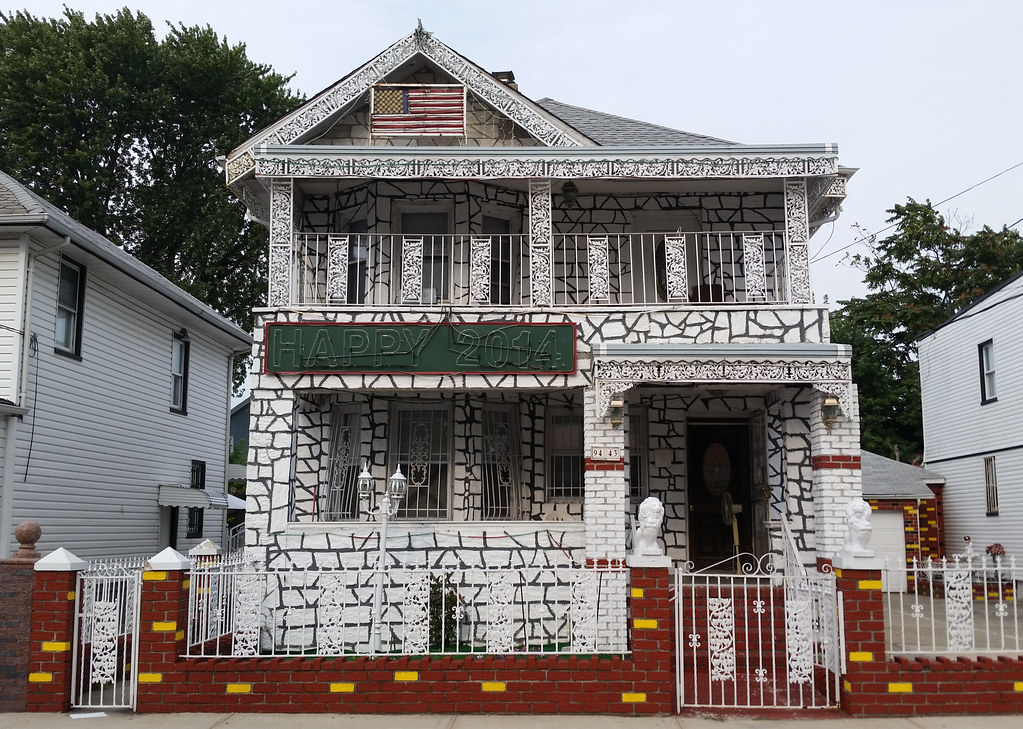 HAPPY 2012 also hung around for quite a while. 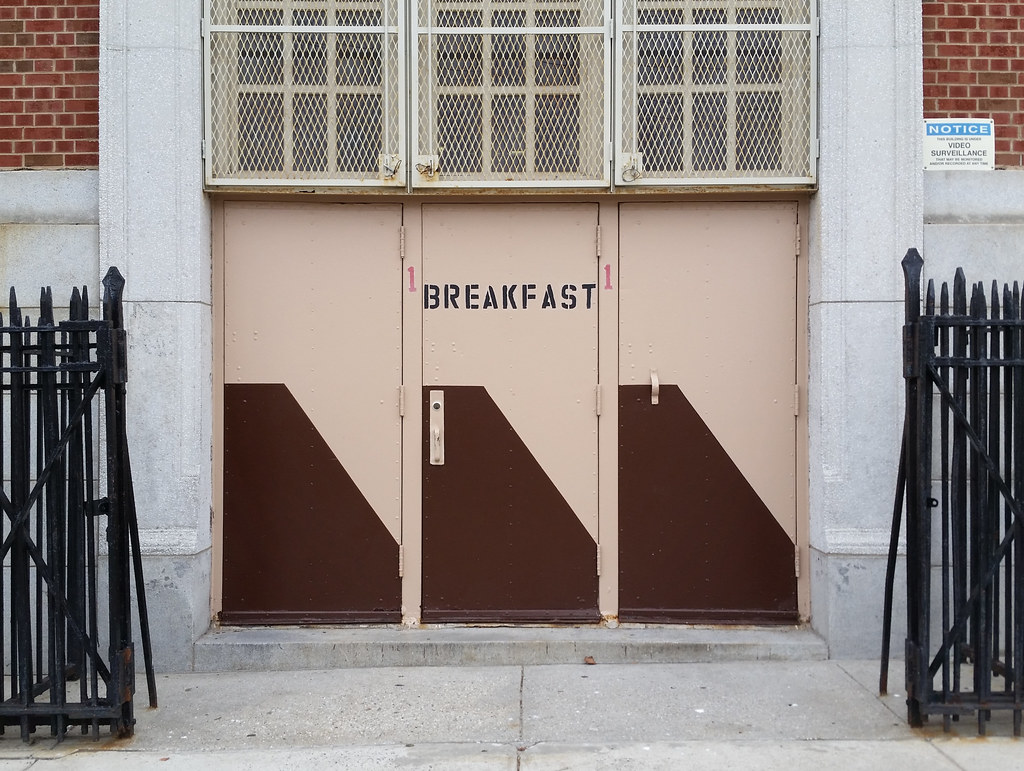 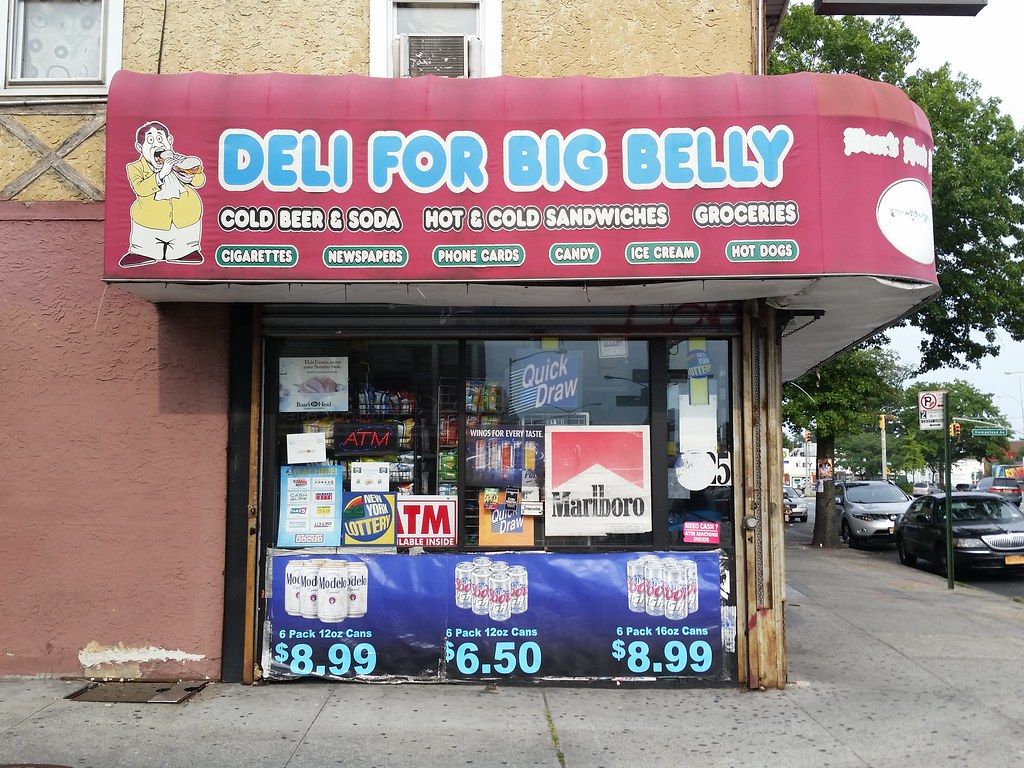 Whether you currently possess a big belly or are looking to develop one in the future, this is the deli for you. 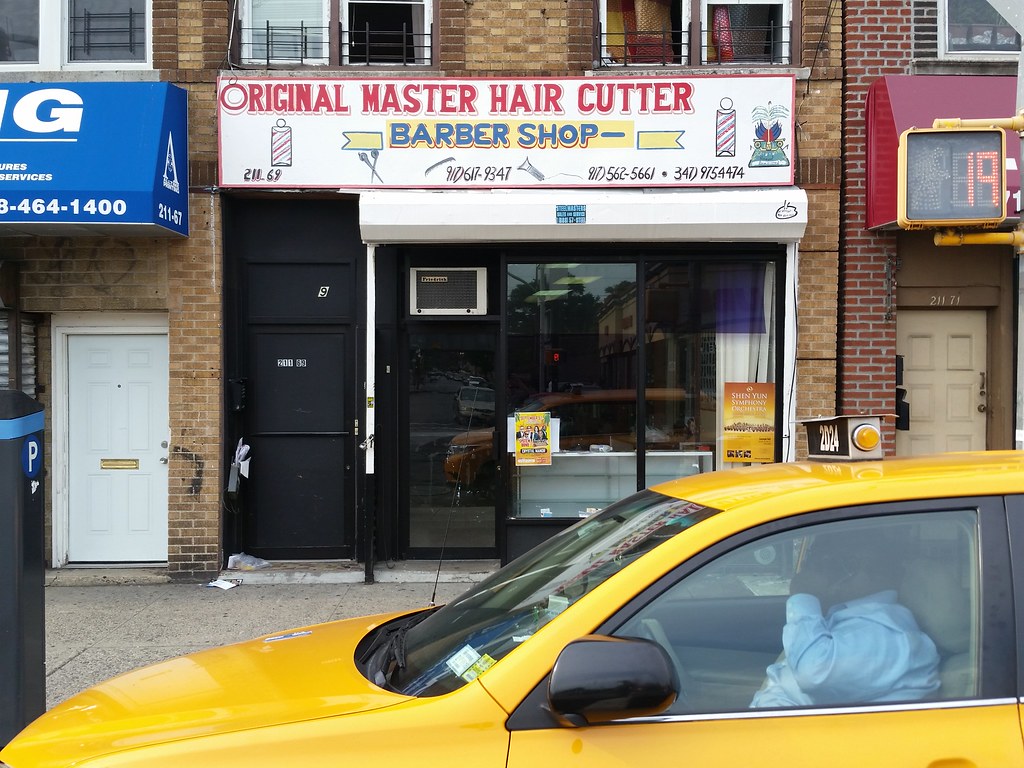 That's the Haitian coat of arms painted on the far right side of the sign (zoom in). Two years ago, this shop had a different sign, similar in its homemade appearance but without the coat of arms. 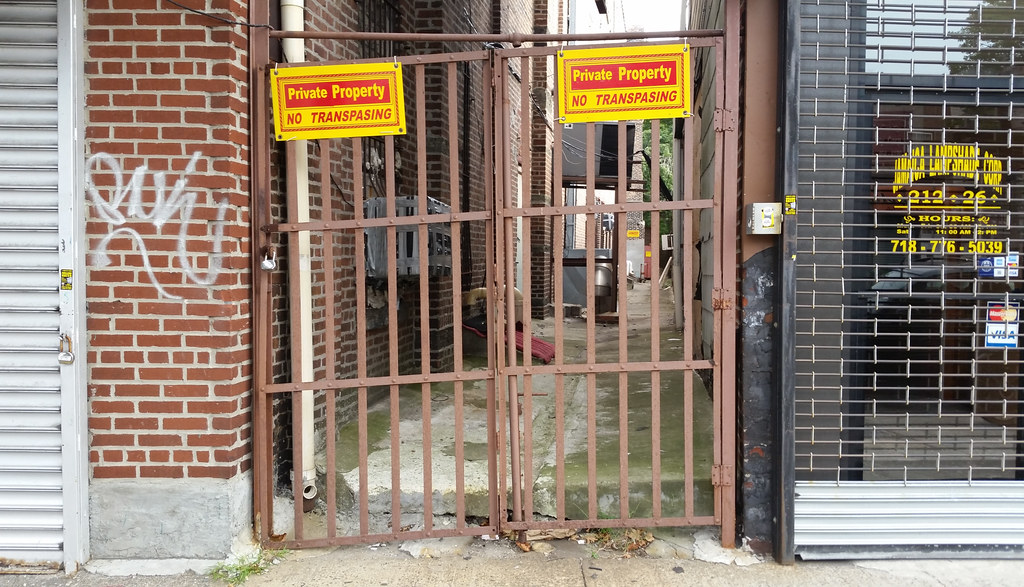 It's the cool new version of trespassing.

At right is the Jamaica Lampshade Corporation, which was founded in 1953 and is "one of the oldest manufacturers of lamp shades in the country", according to its sign and website, respectively. 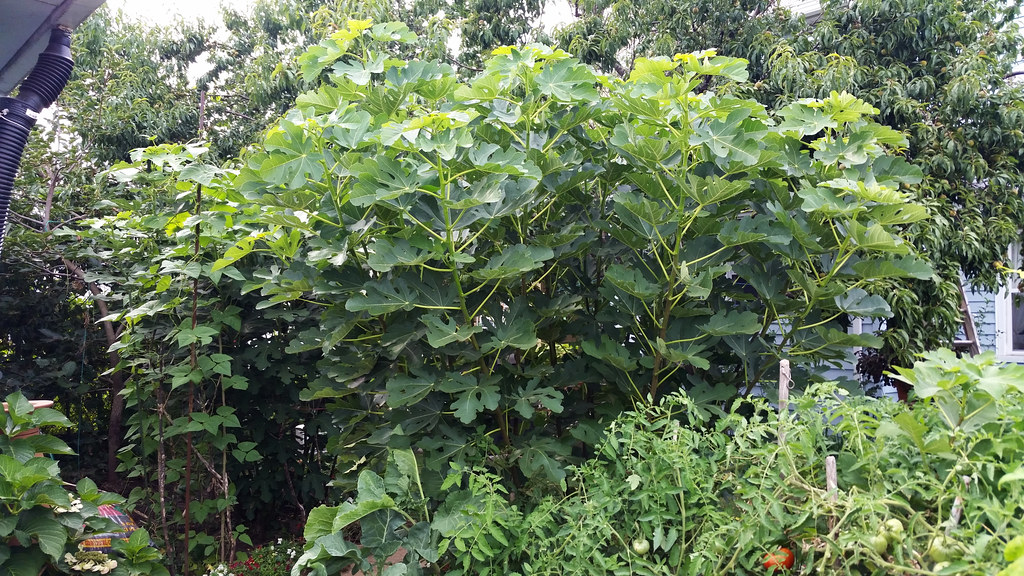 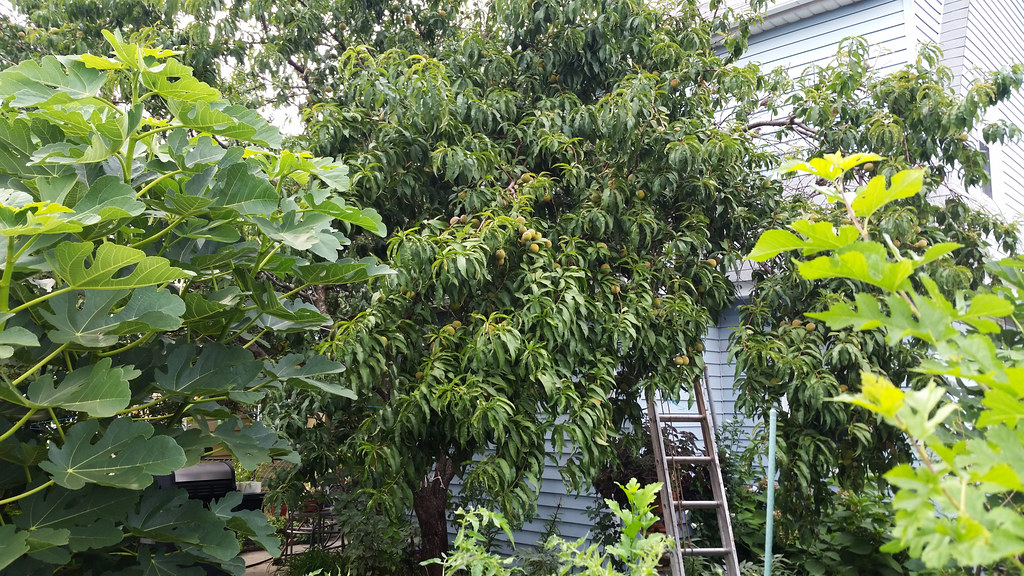 can be spotted in this teeming backyard garden alongside figless fig trees (looks like it's gonna be another sorry year for figs), pole beans, and a zillion peaches. 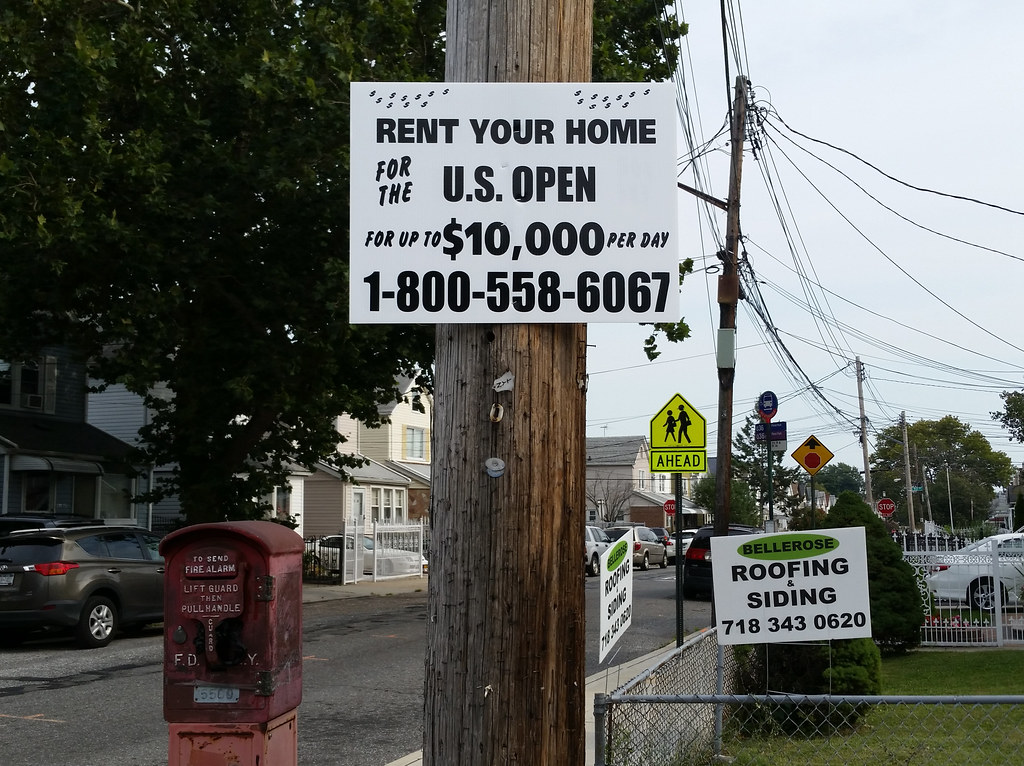 I have a hard time believing that. Let me count the reasons why:

1) It's a big number on a sign stapled to a utility pole.

2) We're in Queens Village, a neighborhood of modest homes, about a 7-mile drive away from where the US Open is played in Flushing Meadows. There are enough fancier areas located closer to the tennis center to satisfy whatever minimal demand there may be among the super-rich for $10,000/day housing options that are not in Manhattan.

3) This sign was put up by, or is at least almost identical to signs previously put up by, a company called Major Event Rentalz. With a name like that, I'm automatically suspicious, unless they're cutting my hair.

4) Major Event Rentalz is one of a number of similar companies (including the purportedly unrelated Major Event Rentals) that promise you big bucks for renting out your home, but make you pay a hefty sum up front for listing your place. If that sounds shady to you, you probably won't be surprised to learn that the State of Indiana sued Major Event Rentalz and another company in 2012 for ripping people off in the lead-up to that year's Super Bowl in Indianapolis by charging them high fees and never finding them renters. 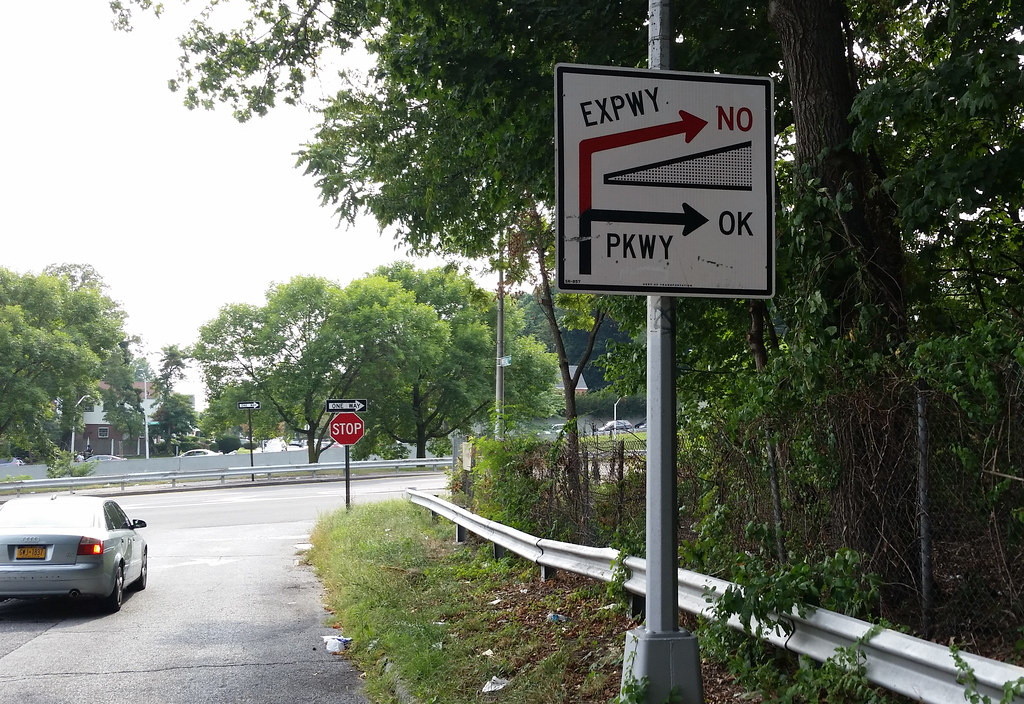 This sign on Whitehall Terrace is attempting to communicate to drivers that they can take an immediate right onto the ramps to the Grand Central Parkway, but are not allowed to cross the striped-out median area to turn right onto the Clearview Expressway ramp.

What's especially weird about this situation is that vehicles heading west on Whitehall Terrace, like the car above, encounter no indications, other than this cryptic sign, that they're approaching the Grand Central Parkway and are about to be forced onto it. Whitehall Terrace is just a little local street where drivers unfamiliar with the area might end up while looking for something nearby. Hoping to stay in the neighborhood, they'd turn right at the stop sign — the only direction you're allowed to go — and suddenly find themselves having to decide within about 70 feet whether to take the eastbound or westbound ramp to a parkway they never intended to be on in the first place.

A time capsule of dumping fines 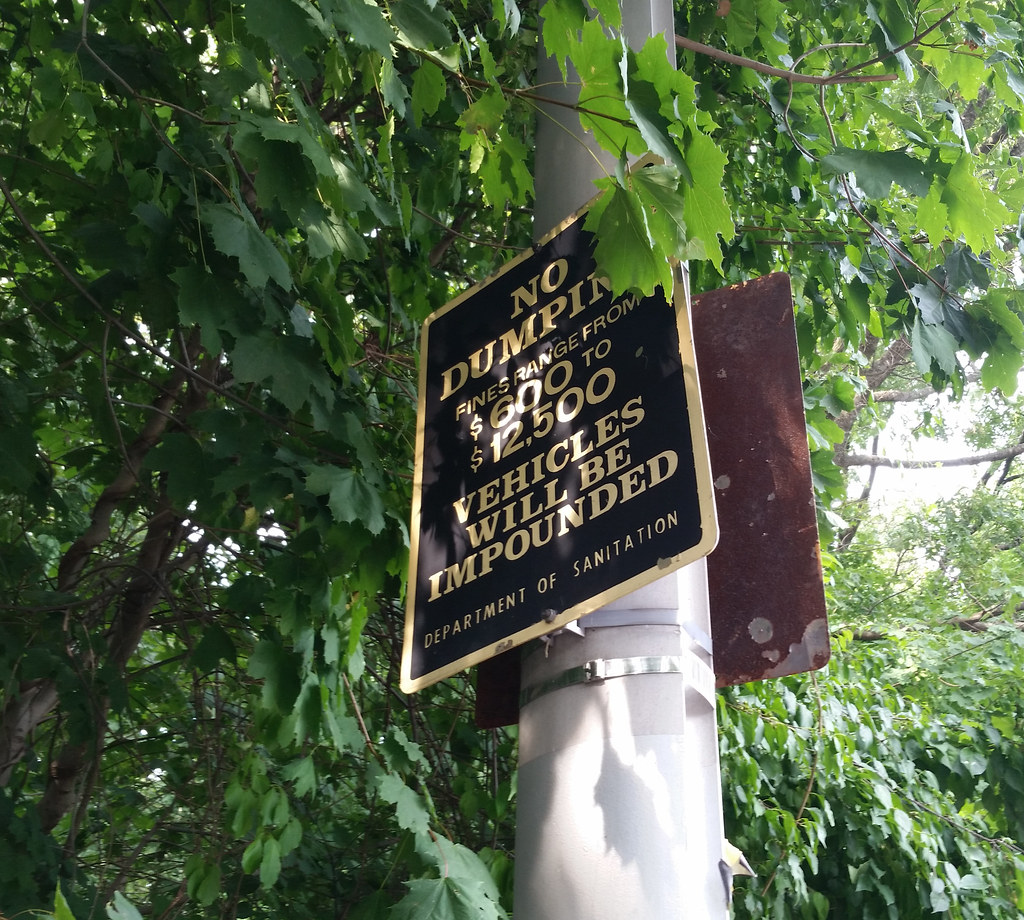 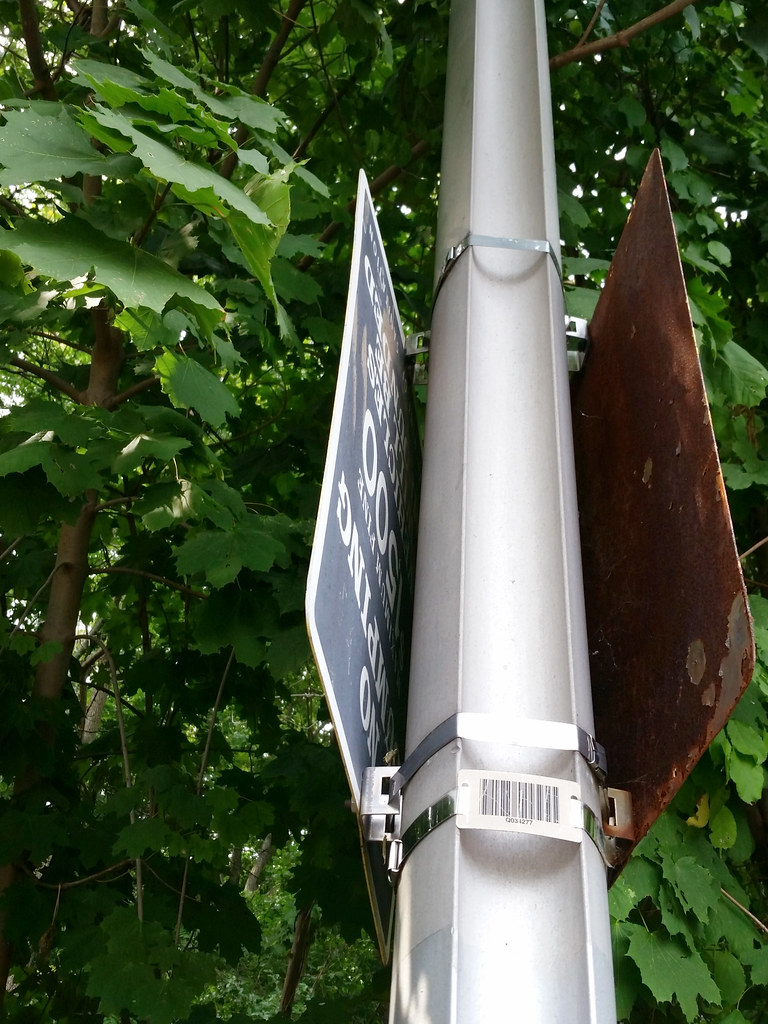 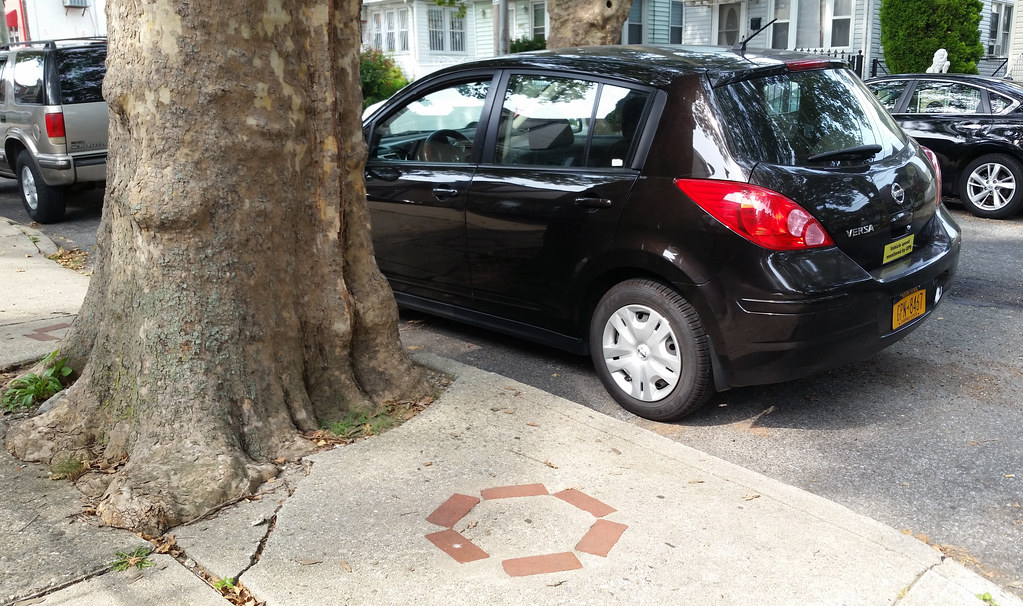 A second hexagon, partially visible above, can be found on the other side of the tree.