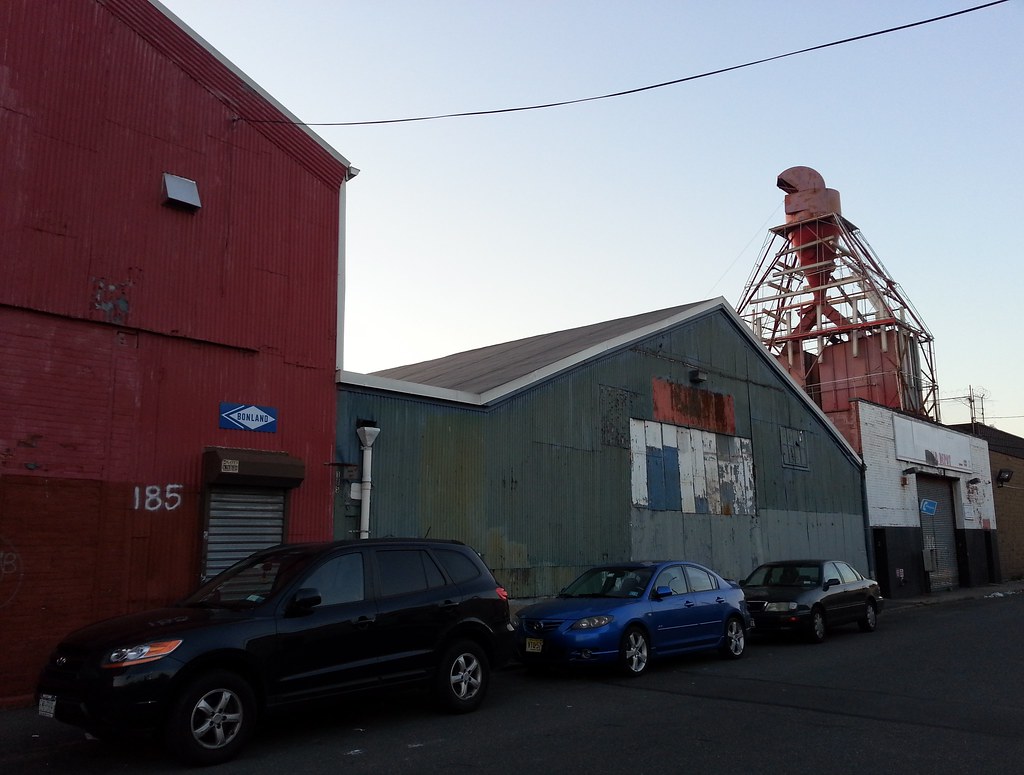 This block-long Bronx thoroughfare is named for the old Mott Haven Canal, which once ran just east of here, along the route of today's Canal Place, from the Harlem River up to what is now 144th Street. (Here's a map of the canal, circa 1880.)

The neighborhood of Mott Haven was developed by Jordan L. Mott, the inventor of the coal-burning stove. Mott was the "first major industrialist to locate in the Bronx", establishing an ironworks on a large piece of land he purchased from Gouverneur Morris II (who, in his later years, was "guided into church every Sunday morning by his women folks, his hair and cravat awry, and possessed of a great bandanna handkerchief, with which, from time to time, he blew sonorous blasts through his nose that set the young folk off into convulsive giggles.")

According to the Landmarks Preservation Commission:

Though some considered his ventures an unwanted intrusion, in 1850 Mott proceeded with plans for the lower part of the Mott Haven Canal, which followed an underground stream running parallel to Morris Avenue, about halfway between it and the Harlem River. The canal enabled boats to travel inland as far north as 138th Street, about the distance of a dozen blocks, and encouraged local industrial development. New enterprises included other metal works, lumber yards, saw mills, stone yards, enamel works and a notable concentration of impressively-built piano factories.

A proposal was later made to extend the canal up to Main Street (today's 144th Street), as told by Stephen Jenkins in his 1912 history of the Bronx:

In 1869, the property passed into the hands of Rider and Conkling, the owners of about six hundred lots in Mott Haven, who proposed to complete the canal to Main Street; but they at once met with opposition from the residents and landowners of the vicinity, on the ground of the liability of the canal's becoming a source of malaria and a nuisance.

Rider and Conkling won approval for the extension by promising to dredge the canal and build bulkhead walls along it, construct and maintain bridges over it, and fill it in at their own expense should it ever be deemed a public nuisance. However:

The owners failed to bulkhead the canal as agreed, and the mud banks frequently caved in. Locks were constructed, which prevented the rise and fall of the tide; so that the canal became an actual cesspool in which the bodies of dead animals and other refuse floated for days. The canal was declared a public nuisance by the boards of health of both Morrisania and New York; and, after annexation, by the Park Department, by the Department of Street Improvements, by the Board of Estimate, and by other public bodies.

That sounds like an open-and-shut case for filling the canal. But, as reported by the NY Times in 1900:

For years the citizens and property owners of the neighborhood have been fighting to have the "canal" filled in, claiming that it was a public nuisance, a breeder of disease, and a depreciator of property values for blocks around in all directions. The alleged nuisance was fought before the Park Board, the Department of Street Improvements, Board of Health, Board of Street Openings, local board, and Board of Public Improvements, in turn, and while each of these sustained the citizens in their fight, yet, so strong has been the influence wielded by the North River Electric Light and Power Works, whose power house is on the canal, that the actual filling has been successfully staved off each time.

The company, it is said, effects a considerable saving in running expenses by the use of the water for condensing purposes and for towing coal to the works. Interested in it as stockholders are said to be some of the most powerful Tammany politicians, and it is alleged that so strong has been this influence that there has never been wanting a city official ready and willing to block its progress on technicalities, postponements of action, &c., so that it has come to be believed in the neighborhood that Richard Croker himself is a stockholder.

The residents of Mott Haven finally had their way, however, and the portion of the canal north of 138th Street was filled in and made over as Canal Place by the end of 1903, with the original section south of 138th Street being likewise filled in some years later. So, while this controversial waterway has long since vanished from the map, it is, like its much more famous Manhattan counterpart, still recalled by the aluminum street signs that mark its former course, proclaiming with earnest enthusiasm to all who wander past: CANAL!

(On a side note, the Mott Haven Canal, seen here, was, despite its sullied reputation, the inspiration for at least two works of art that have stuck around long enough to be uploaded to the internet. You can view them here and here.)