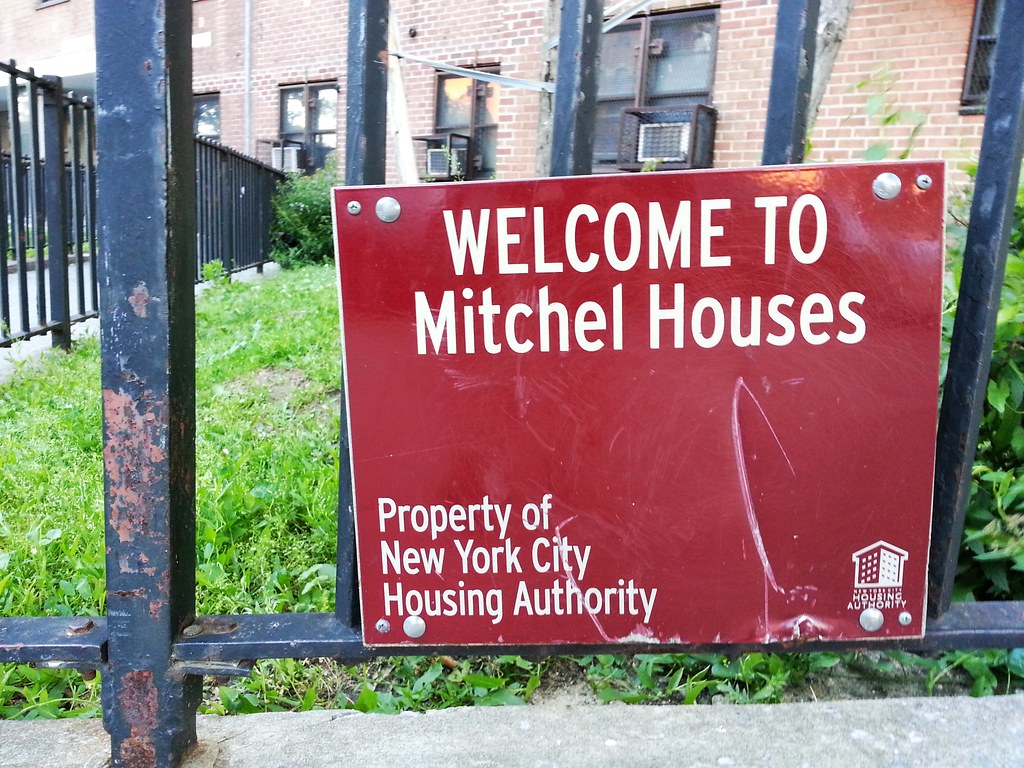 This public housing development is named for John Purroy Mitchel, the mayor of New York City from 1914 to 1917. Known as the "boy mayor", he was sworn in at the tender age of 34, making him the second-youngest mayor in the city's history, and the youngest to preside over the modern five-borough city.

An anti-Tammany reformer, Mitchel is widely considered to have been an effective and honest mayor. He was greatly admired by Fiorello La Guardia (the only NYC mayor to rank ahead of him in a "classic" 1960 study), whose mayoral speeches "rang with Mitchel's name". Teddy Roosevelt was also a big fan. Endorsing Mitchel's bid for re-election in 1917, Roosevelt wrote that Mitchel had "given us as nearly an ideal administration of the New York City government as I have seen in my lifetime, or as I have heard of since New York became a big city."

But despite his popularity among reform-minded, good-government types, Mitchel lost the 1917 race in a historic landslide. He may have been a good mayor, but he was a crummy politician — and he knew it. In fact, he had to be talked into running for a second term, as he believed, correctly as it turned out, that he would be unable to win. According to his secretary:

He knew just enough about politics to know that, unless an officeholder strives to please groups and factions to the sacrifice of real efficiency, re-election is impossible. Many times, in going over stacks of invitations, which came to him daily, I would urge him to go to this or that function, which was uninteresting and dull, but at which his attendance would please some group or section of the city. . . . He would absolutely refuse to attend these affairs, and when I would insist out of consideration for the fact that he was making political friends, he invariably replied that he had no desire to gain ground politically, that he was through with political life after this term, and that he merely wished to do the immediate job that lay before him the best he could.

Shortly after leaving office, at the age of 38 and with World War I raging, Mitchel joined the Army's aviation service. The former boy mayor thus became "America's oldest flying cadet". But just a few months later, during a training exercise in Louisiana in 1918, he fell out of his plane and plummeted 500 feet to the ground, dying on impact. He had not been wearing his safety belt.

During his time in office, Mitchel carried a handgun, and once "brandished it in front of City Hall when he was fired upon by a crazed 71-year-old man". If the idea of a pistol-packing mayor sounds strange, keep in mind that Mitchel's predecessor, William Jay Gaynor, was himself the target of an assassination attempt, getting shot in the neck by a disgruntled former city employee.

Mitchel's record as a gun owner was somewhat tarnished, however, by another incident during his mayoralty. While he was exiting his car after a day of target practice upstate, a pistol he was carrying slipped out of its holster and fell to the sidewalk. The impact broke the safety, and the gun fired into the thigh of Mitchel's shooting partner, the real estate developer and former state senator William H. Reynolds.

So perhaps it is appropriate that a policeman stopped me outside of Mitchel's namesake housing project to question me about a suspicious-looking bulge in my back pocket. He and another officer who had previously seen me thought I might be carrying a gun. Turns out it was a water bottle.

And the gun-bottle distinction wasn't the only difference in our perceptions of reality:

Officer: You live around here?

Me: Oh, I'm doing this big project, trying to walk every block of every street in the whole city.

Officer: OK, when you say that to me, I understand what you're saying. But these people [referring to the public housing residents], they're not gonna understand that. They see you walking around and taking pictures of them, they're gonna kick your ass. I've seen it happen. That's why I thought you might be carrying something to protect yourself.

Now, I don't go around sticking my camera in people's faces, but I have walked through dozens of housing projects, and none of "these people" have yet kicked my ass or even threatened to do so. It's almost like if you walk around and act respectfully toward other people, they won't mess with you. Crazy!