Brooklyn’s Other Museum of Brooklyn 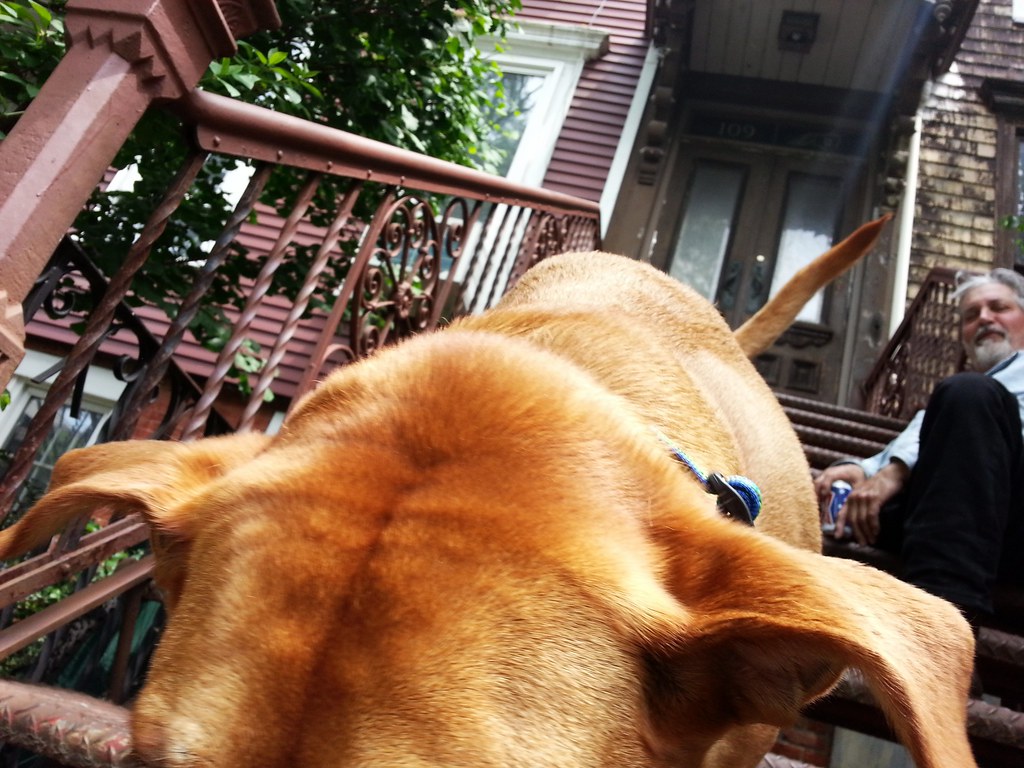 So reads a sign just out of frame at the top of the photo. I was attempting to capture both the sign and the face of Dashi the dog in a single image, but I failed to get either, thanks to an enthusiastic hunt for affection on the part of a certain canine friend of ours.

Sitting up there on the steps above Dashi is Scott Witter, the proprietor and curator of B.O.M.B. The tiny museum, contained inside this row house, is only officially open from 7 PM to 9 PM on Tuesdays, but before I knew it — I don't think I had said much more than "I like the name" — Scott was heading next door to fetch the keys (and his last two cold Budweisers) so he could show me around the place (and give me a cold Budweiser).

A "discordant but impassioned love song", the museum consists in large part of artifacts that Scott has dug up, pulled out of dumpsters, spotted on the beach of Coney Island Creek, salvaged from demolition sites, or, in the case of a military practice bomb perched above the stairwell, found in the Utah desert. He once, on the spur of the moment, bought the front 20 feet of an architecturally distinguished meat market that was about to be torn down so he could dismantle it himself and save it from being trucked off to the landfill or the scrap yard. He also purchased 60 tons of the facade of the Long Island Rail Road's old Flatbush Avenue Terminal after losing a battle to keep the building from being razed. His dream is to find like-minded buyers interested in reassembling these structures, but he comes up with other uses for his relics in the meantime — an ornate concrete oculus window from the rail terminal's post office once served as his daughter's kiddie pool, for example.

Scott's current mission, also reflected inside the museum (and, more visibly, on the sidewalk outside), is to keep the city from destroying 9 of the 11 buildings on Admiral's Row to make way for a giant supermarket and some other commercial and industrial spaces. He's authored a piece for an NY Times blog about the importance of preserving the 19th-century naval officers’ quarters, and he's also written his opinions on the side of a nearby building in blue painter's tape. The latter form of expression tends to be more inflammatory in its criticism of the development-minded Mayor Bloomberg, referring to him alternately as Mayor Moo Moo ("because he milks his constituency") and Pirate Mike ("because he is stealing our national, state, and local heritage").

After an hour or so, Scott sent me on my way with a handful of materials promoting the fight against the demolition of Admiral's Row and an invitation to stop by any Tuesday for "Museum Night". I'd recommend dropping by yourself if you're in the area. Scott's a one-of-a-kind guy with an endearing appreciation for the overlooked. And judging by the collection of empty beer cans in the bathroom and the well-used pool table that stands in the middle of the cluttered exhibition room, I'd say Museum Night must be a pretty good time.