The Church of the Lord Jesus Christ of the Apostolic Faith 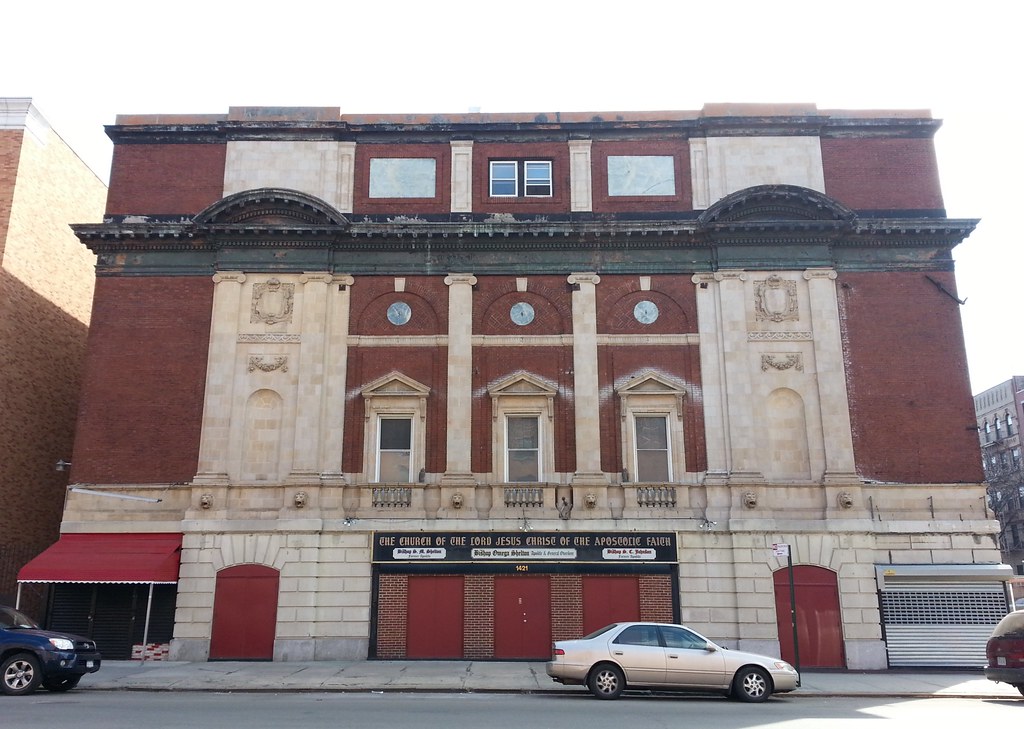 This building opened in 1913 as the Mount Morris Theatre. The following year, four local burglars were arrested after cleaning out a nearby tailor shop and stashing the stolen goods in the theater. A cop spotted the theft in progress and followed the men back here, imitating a stumbling drunkard so as not to arouse their suspicion. After other officers arrived on the scene, the police raided the building. The thieves attempted to escape, but the cops pursued them through the theater, "even into the fly loft, jumping and swinging through space like a bunch of bats."

A few years later, according to a piece in Cigar Aficionado written by Groucho Marx's son, a preteen Milton Berle got an early career break here when he was hired to appear with Irving Berlin one evening, singing Mr. Berlin's "Oh! How I Hate to Get Up in the Morning" from a box beside the stage, skirting a child labor law that prohibited children from performing on stage at night.

As World War I was raging, the newly formed Institutional Synagogue began meeting here. In a speech at the synagogue in 1918, not long before the passage of the Sedition Act, Congressman Julius Kahn said he had been informed that many neighborhood residents were opposed to the war. He then "told [the] large audience . . . that immediate and direct measures must be taken by the Government to silence all individuals and organizations that raise their voices against the war", exclaiming to the cheering crowd:

"When a seditious or traitorous voice is raised here . . . I hope the hand of the law will reach out and grasp the speaker. I hope that we shall have a few prompt hangings, and the sooner the better. We have got to make an example of a few of these people, and we have got to do it quickly."

At the end of 1919, the theater reopened as a burlesque house. By 1932, "it was featuring Latino stage and musical performances", and continued operating as a series of Spanish-language theaters, most notably El Teatro Hispano, until at least the mid-1950s. You can see a 1934 drawing of the building here.