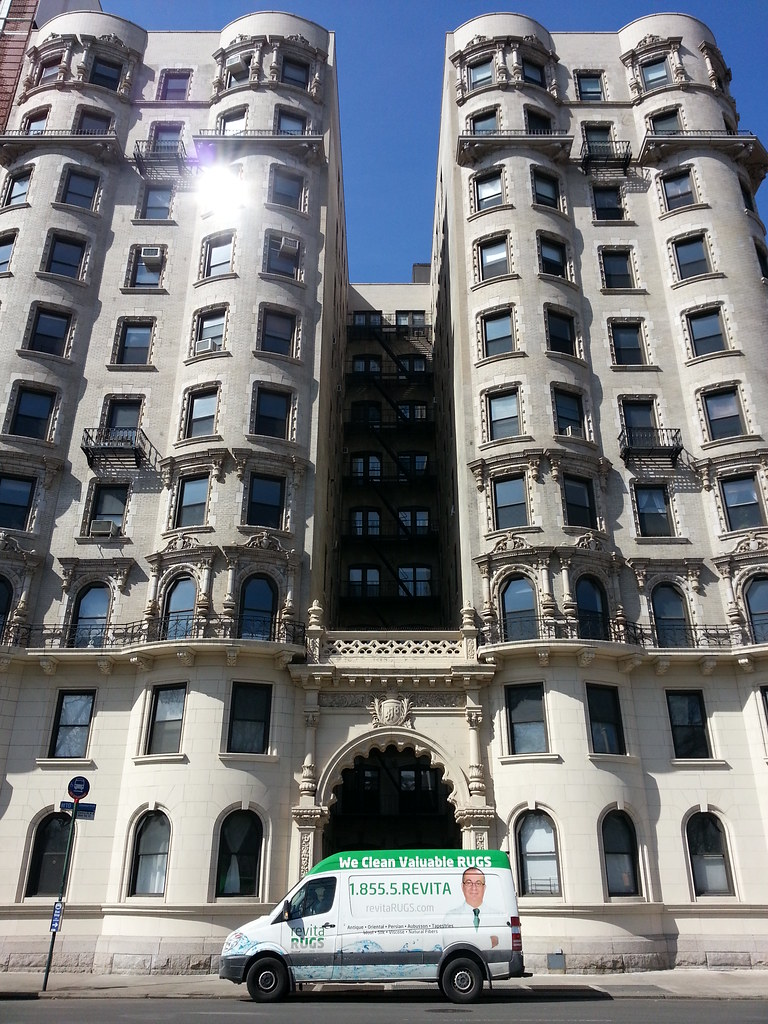 "The Ungainly Duckling That Alighted Along the Park" is apparently home to one or more valuable rugs.

Probably the most famous residents of the Braender were Winifred Sackville Stoner and her daughter of the same name, who lived here in the 1920s. Winifred Jr., born in 1902, had been celebrated as a child prodigy, "the roly-poly girl who talks eight languages and teaches school and writes poetry and does a score and one things additional that stamp her as the most unusual of 12-year old girls". Winifred the Elder insisted that her daughter was not particularly gifted, however, and that it was the system of "natural education" that she had devised for her daughter that had allowed her to flourish.

A key part of this educational system was the creation of little poems or jingles to help keep facts straight. Young Winifred was a rather prolific author of such verse. (Here's one of the collections she published.) Her most well-known poem, "The History of the U.S.", begins with a couplet you may have heard before: "In fourteen hundred ninety-two / Columbus sailed the ocean blue". Don't give her credit for that rhyme, however. It was around well before she was, as this joke makes clear.

Mother Stoner (or "Mother to All Children", as she was sometimes billed when speaking about her educational methods) much preferred these practical, factual rhymes to the "immoral, un-American, brutal, ungrammatical, silly, and salacious" tales of Mother Goose, which

[teach] children to lie and steal—in some cases to take life. . . .

No one should misinterpret life to children. It is not only criminal to do this, but it makes criminals of children. Mother Goose nourishes fear and inferiority complexes. And Mother Goose is so English in its terms that the child forgets he is an American, unruled by king or sixpence.

Mrs. Stoner's eyes were opened to the grievous flaws of Mother Goose when her three-year-old daughter called her out as a liar for suggesting that a cow could jump over the moon, that a dog could laugh, and that a dish could run away with a spoon. She relates that story in this absurd 1925 article, in which she also offers her criticisms of several popular nursery rhymes, including:

Goosie, goosie, gander,
Where shall I wander?
Upstairs, downstairs,
In my lady's chamber,
There sat an old man who wouldn't say his prayers.
I took him by the left leg and pulled him down the stairs.

"The rank immorality of this poem is evident at once," she comments. "What was that old man doing in the lady's chamber? His presence there was improper and a violation of all decent conventions. I would substitute for this atrocious piece of loose morals something like this:

"This takes the attention from the goose, the most stupid animal in all nature, and focuses it on one of the first Christian virtues, cleanliness. We mothers cannot begin soon enough to teach the beauty of cleanliness to children."

In 1927, mother and daughter took off across the US and Europe, respectively, on a hunt for young geniuses. According to an article about their search, "All the children thus discovered will be brought back to New York", where Mrs. Stoner would foster their brilliance under her educational guidance. The article goes on:

The world is divided into six classes, in which the hyper-morons—otherwise the rank and file of human beings—predominate, according to Mrs. Stoner. These classes are:

Destructionists include anarchists, bomb throwers, etc., while constructionists are those striving to improve their business and include bank presidents, highwaymen and newspapermen.

"But the world is full of morons," she asserts. "The girl who wears furs in summer because it's the style is a moron. So is the man who wears a collar in hot weather. So is the minister who preaches the same old stuff from the pulpit. Morons, in brief, are those who blindly follow in the rut."

This might be hard to believe, given her perfectly normal-sounding childhood, but Winifred Jr. had a rough go of it as an adult. In 1921, at the age of 18, she married an urbane French count named Phillippe Clinton de Bruche who turned out to be a duplicitous German con artist known to the police as Robert Hemholtz. (His pseudonyms, especially the French one, vary somewhat from one article to another.) After she began divorce proceedings, the phony count reportedly died in an automobile accident in Mexico in 1922 (her family held the funeral service here at the Braender), only to reappear in New York in 1929 upon reading that Winifred had become engaged to former Secretary of State Bainbridge Colby.

In the intervening years, before she found out de Bruche/Hemholtz wasn't actually dead, Winifred Jr. had married again, making her an unintentional bigamist. The relationship didn't last long, however, and the papers ate it up when the couple split, especially when it came out that Winifred's husband thought she made a lousy cup of coffee. Headlines included "Speaks Seven Languages, But Cannot Make Coffee—So She Loses Husband" and "Wonder Child's Intellect Bad For Marriages".

In a 1930 newspaper article, Winifred Sr. admitted she made some mistakes in raising her daughter. (Of course, this admission was coupled with an announcement that she was working on a book about "why her perfect child hasn't found happiness.") Her biggest regret? "Not staying at home and being an old-fashioned matchmaker for Winifred."

Winifred Jr. got married for a third time in 1931, but she and her new husband called it quits a few days later, at which point her mother proclaimed: "Winifred is now cured of matrimony. She will stick to her books instead of showing interest in men whose pedigree she does not know."

The last article I could find about Winifred Jr. told of her filing a charge in 1937 with the district attorney against a man she claimed stole $7,000 worth of her jewelry, but then abruptly fleeing the DA's office when she saw two detectives arrive with warrants for her arrest on charges of bail-jumping and petty larceny (stemming, I believe, from an unpaid hotel bill).

I also found a website with some bare-bones info on Winifred Jr. collected from various publications over the years. According to that site, she got hitched two more times in her later years. It sounds like the first marriage lasted about 18 years, from 1943 until her husband's death, and the second lasted another 18 and change, from 1964 until her own death in 1983. (Man, this is my most gossipy post ever.)