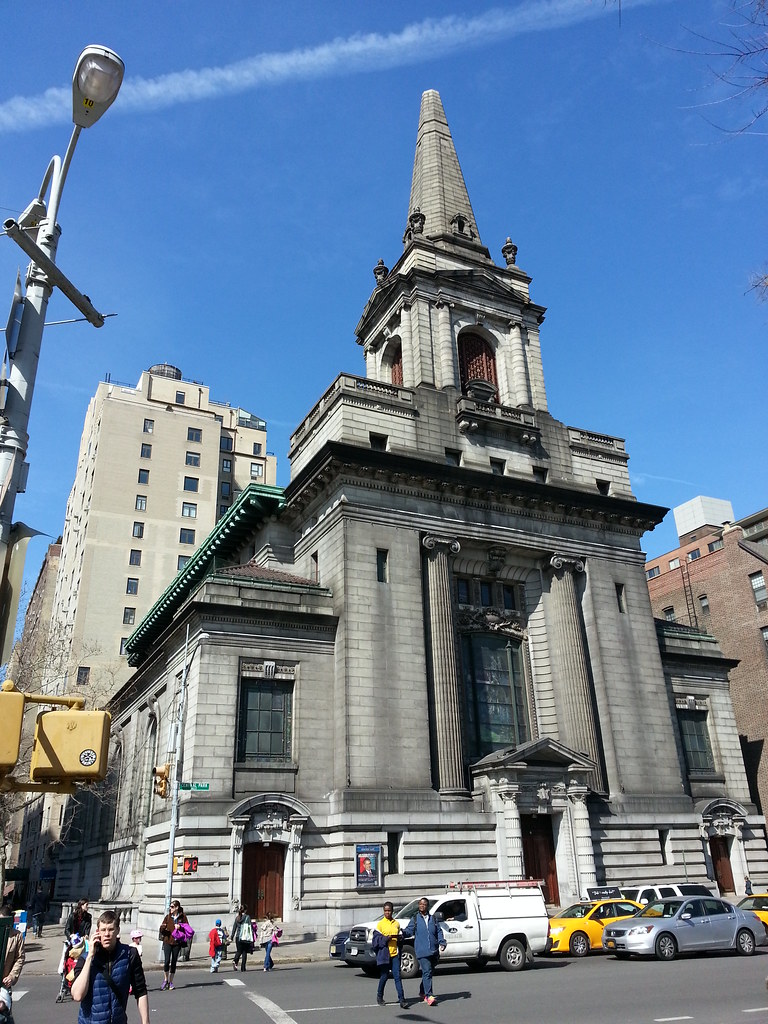 Now home to the East Coast branch of Crenshaw Christian Center, the L.A. megachurch known for its massive FaithDome, this imposing 2,200-seat edifice (interior photo) was completed in 1903 for the First Church of Christ, Scientist, which occupied the place for the next 100 years. Augusta Stetson, one of the women who brought Christian Science to New York, was the head of the church at the time of construction, having previously driven off a fellow church pioneer who then went on to found a rival congregation. "Endowed with boundless energy and executive capacity, audacious, abrasive, unbending and ruthless, yet adored by hundreds of students and church members", Ms. Stetson was a strong and forceful leader whose personal ambition strained relations with the Mother Church in Boston and eventually got her excommunicated in 1909. (Note the adjacent story in the newspaper I just linked to: "TARANTULA IN MAIL. Throws Dead Letter Office Clerks Into Frenzy.")

Promoting herself as the true spiritual heir of Mary Baker Eddy, the founder of Christian Science, Ms. Stetson maintained a considerable following after her excommunication and even began taking out full-page (and sometimes multiple-page) ads in prominent newspapers to feud with the church establishment and present her teachings directly to the masses (as well as to publicly wage a successful battle against the "spite wall" that the church wanted to erect between its own building and the mansion she lived in next door). She proclaimed that Ms. Eddy would be returning from the dead shortly, and also "announced, with all solemnity and seriousness, that she [herself] would never die. She made it clear she meant this in no metaphorical sense and that she did not have reference to the immortality of the soul. She simply would not die."