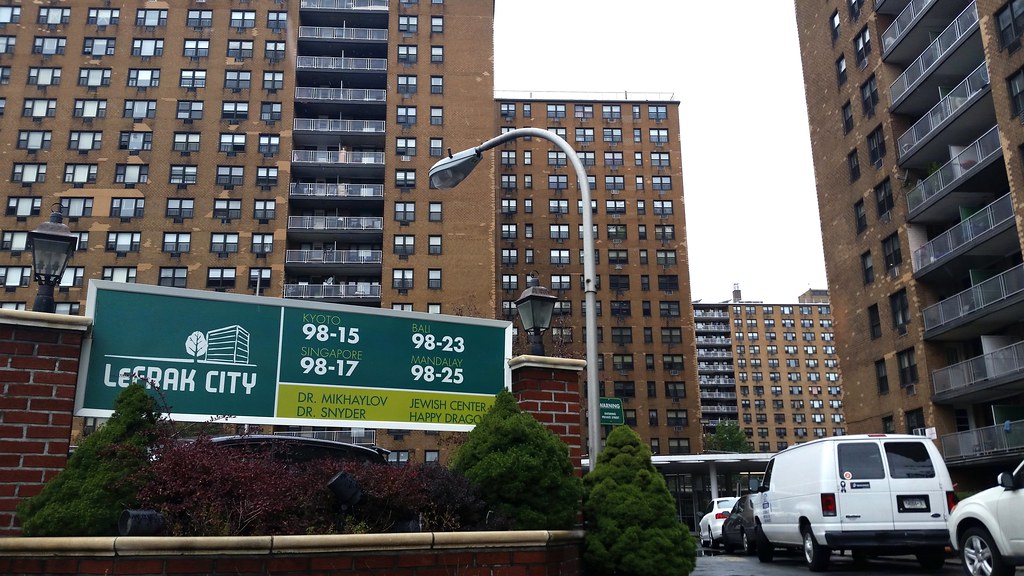 You're looking at four of the 20 buildings (each named after a city/country/island) that make up the residential core of LeFrak City, a massive mixed-use development that was built in the 1960s as the largest privately financed apartment complex in the US. Its population is often said to be around 25,000, but 2010 census figures put it at about half that.

The man behind LeFrak City was the late Sam LeFrak, one of New York's most prolific real estate developers and a bombastic, hyperbolic character who must have been a lot of fun to interview:

Q. What is the significance of that (a bronze plaque of Romulus and Remus, the mythological wolf cubs who built Rome, nursing from their mother)?

A. Everybody is feeding off me. I am feeding Romulus and Remus.

Q. You don't see yourself as either Romulus or Remus?

Q. What kind of influence and relationship do you have with people in government?

A. It's the respect that they have. Look, I have title. (Mr. LeFrak was knighted by the King of Norway.) I also am a doctor. (He has received a number of honorary degrees.) And I'm also a guy who has done some very exciting things in my life, and life isn't over at 65. I will give you a perfect example. I am getting a Social Security check. It's ridiculous. I give it away to charity. My life, the great stuff is coming. I have some great plans. Read some of the things I have written. I have a school, the Lefrak Brick and Mortar College, and if you go to Oxford University St. Cross College (in England), you will see a big plaque at a library I donated there. I am a person that is very well known. That is why I am being invited to talk before the Parliament in Finland. I am asked to come to China to build cities. In Egypt they call me Ramses III. The point is, don't compare me to these little builders. Not that I have any criticism - you know a long march starts with the first step - but I have been up to the top of the mountain. I have tremendous years of experience. Do you know what is sitting in the memory bank of my computer? Do you realize the work that I have done? Do you realize how many impossible things I made possible?