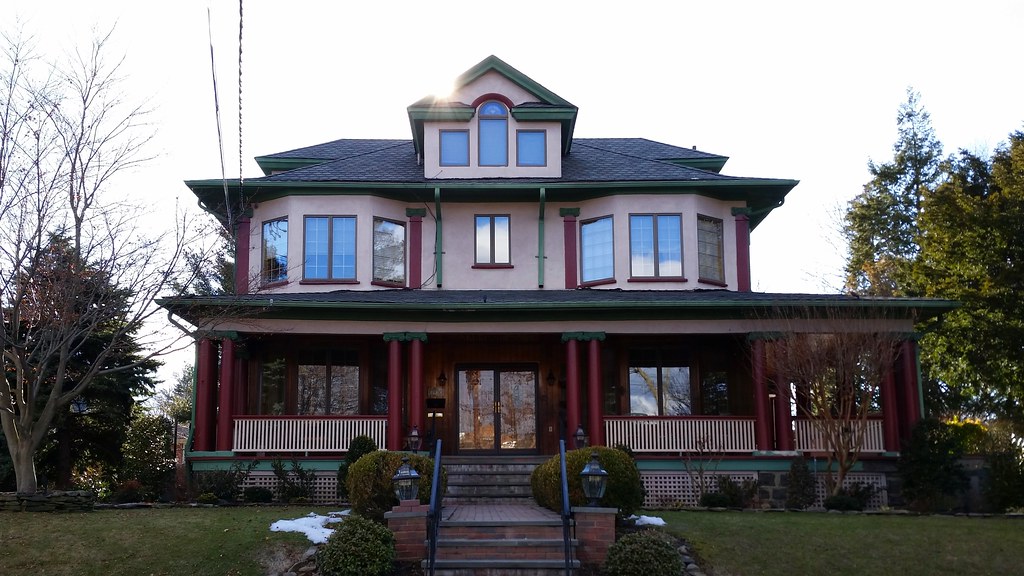 This page offers a little information about the house. More intriguingly, it also notes that a different house in the neighborhood was once home to the daughter of "Henry Clay Weeks . . . the Secretary of the American Society for the Extermination of Mosquitoes".

According to his obituary in the July 2, 1910 Boston Evening Transcript, Mr. Weeks was "said to have been the first man in this country to start the crusade against mosquitoes". And his obit in the Medical Record says he "was the first secretary of the American Society for the Extermination of Mosquitos, and was an active experimenter in carrying on the fight, the present general public interest being largely due to his efforts."

This would make him, I suppose, a grandfather of NYC's ubiquitous sewer dots!

The Christian Advocate adds a little more color to the picture:

It is said that Mr. Weeks and his kerosene oil can at Bayside were the advance guard of the army of mosquito-exterminators which is now abroad in the land. He was largely instrumental in the formation of the American Society for the Extermination of Mosquitoes, and as its secretary was active in its successful campaign of education. Those who laughed at his zeal lived to see State after State appropriate thousands of dollars annually to abate the buzzing pest.

His kerosene oil can? That's a reference to one of Mr. Weeks's mosquito-fighting tactics. A 1903 NY Times article explains that his approach involved "destroying the homes and breeding places of the pests by filling and draining and by 'petrolizing.' This latter method consists in covering the stagnant pools and ponds with petroleum, which forms a film over the water, through which the newly hatched [larvae] cannot penetrate."

But why stop there? According to an NY Times piece from 1902, "Mr. Weeks had a greater idea in his mind than the mere abolishing of mosquitos. His plan has been nothing less than the turning of the vast extent of salt and fresh meadow land along the Atlantic Coast, now useless and a blot upon the landscape, to practical account." As explained in the article, he wanted to drain the wetlands and transform them into productive farmland. Of course, from a 21st-century perspective, coastal wetlands are no longer seen as useless or as a blot upon the landscape, but rather as highly valuable ecosystems in need of protection.

Mr. Weeks's NY Times obituary describes him as "an ardent friend of the shade tree and an implacable enemy of the mosquito and all telegraph and telephone companies that string wires above ground". We know all about his hatred of mosquitoes by now, but what does the rest of that quote mean?

The Christian Advocate once again fills us in:

Henry Clay Weeks, of Bayside, L.I., died last Friday at the age of sixty-six. He was a native of this city and long known as a successful builder here. A man of rugged independence of character and intense personal force, he set himself powerfully against certain tendencies of the time in a way that on several occasions placed him before the public. He could not believe that public service corporations had the right to run wires and set poles wherever they pleased in defiance of private ownership, and he resisted the companies with boundless vigor and undiscourageable persistency. He loved natural beauty and was instrumental in the planting of many trees, whose shade will be a blessing to future generations. It outraged his feelings to see the roadside trees maimed and killed by cross-country trolley-lines and the stringing of high-power feed wires through their limbs. Against this he protested through every channel of publicity that he could penetrate. His own means were unselfishly lavished in printer's ink, photographs and postage to tell the people how their possessions were being despoiled by these barbarous improvements in the name of serving the public.

(The passage above specifically mentions trolley lines, but a 1908 NY Times article says Mr. Weeks was widely known as "the unrelenting opponent of telephone, telegraph, and electric light companies whose men place their poles and string their wires and cables regardless of choice trees or the likes or dislikes of owners of country places".)

Let's give the man himself the final word here, as he waxes philosophical about his arboreal advocacy. In an address to the American Civic Federation in Cleveland in 1905, Mr. Weeks instructed his audience not just to fight for their own trees, but to

teach thoughtless people of the beauty and value they are allowing to be sacrificed for corporate greed. Arouse them to the importance of the moral issues where companies manipulate pliant public officials. Tell them truly that such courses carried to their ultimate end, will drag our country to ruin. Our contest is against the tree butcher—and to make it effective it is against overhead wires where possible and against the threatening evil of the corporate control of public officials by unworthy means in this contest.