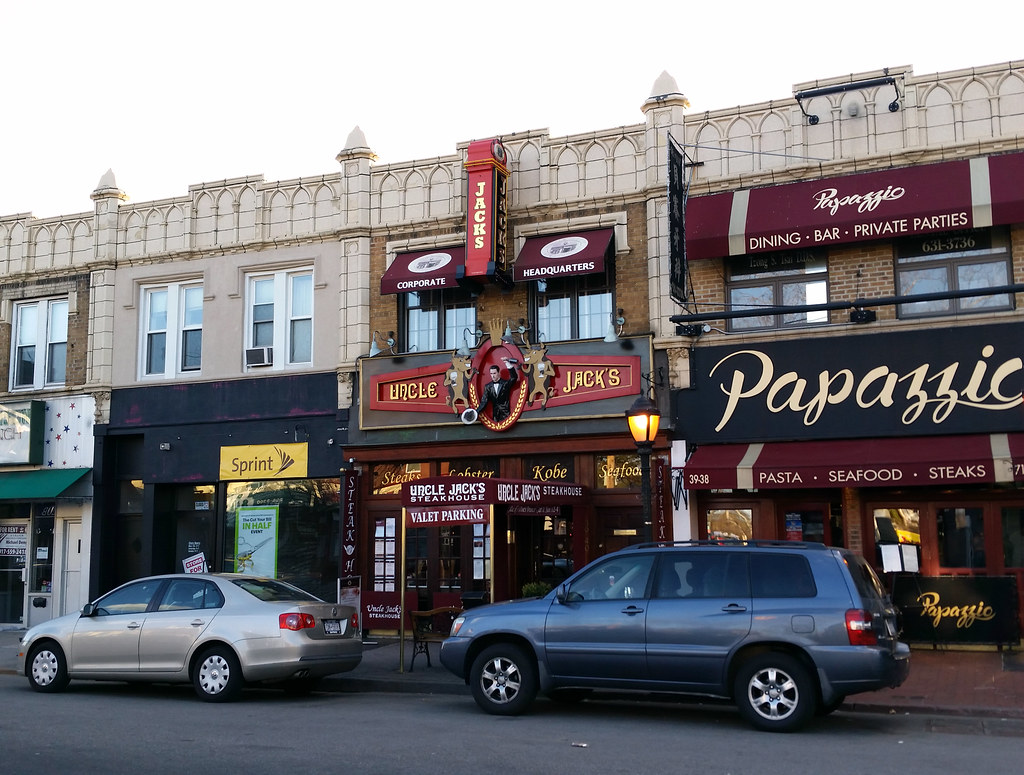 I took this photo of Uncle Jack's because the three-dimensional sign (close-up) caught my eye. I read about the restaurant's history on its website, and I assumed my post would just offer a brief summary of what I learned — something like this: "Opened in 1996, this steakhouse takes its name from the owner's godfather, who ran a famous Prohibition-era restaurant called Jack's on the Upper West Side."

The website's description of Jack's sounded a little overblown, however:

In the early 1930's, with prohibition still in effect, "Jack's" on the Upper Westside of Manhattan became the premiere location for celebrities, socialites and aristocrats yearning to celebrate the finer things in life. Aside from serving New York's finest steaks, seafood and vegetables, "Jack's" was just as well known for its proprietor and his dedication to quality and high standards – qualities that still define Uncle Jack's today.

While world famous for his celebrity clientele, "Jack" would greet every guest as if they were family. Everyone who walked through his doors expected the absolute best - and received nothing less. "Jack" handpicked every item his restaurant served. While praised for his delicious steaks and unique menu, "Jack's" special sauce was arguably the main attraction. Legend has it; the sauce – hand crafted in small quantities once a week and stored in an iron vault – was watched more closely than the weekly shipment of whisky barrels from the South!

"Jack's" flourished for years, catering to New York's finest, and became the place to go for the best steak in New York – a title that was proudly passed on to "Uncle Jack's".

If Jack's was really "world famous for [its] celebrity clientele" and known as "the place to go for the best steak in New York", surely I would find it mentioned in old books and newspaper articles.

It turns out there was a famous Prohibition-era restaurant named Jack's with a well-liked owner, but it doesn't otherwise match the description above. It was located in Midtown (6th Avenue and 43rd Street), not the Upper West Side. It wasn't known for its steaks. It was no longer in existence in the early 1930s, as it closed in 1925. And the owner, John Dunstan, certainly wasn't the godfather of Willie Degel, Uncle Jack's owner: Mr. Dunstan died in 1927 and Mr. Degel wasn't born until 1967 (or possibly 1968?).

After a bit of searching, I found an NY Times article in which Mr. Degel says Jack was both his uncle (his mother's brother) and his godfather, and from 1925 to 1930 "ran a speakeasy near Columbus Circle with his father, who was also named Jack." I can't find any mention of this establishment on the internet, however. While that doesn't mean it didn't exist, it's pretty compelling evidence that it wasn't the world-famous celebrity hangout described on Uncle Jack's website.

Another article in the Daily News quotes Mr. Degel saying his uncle was named Jack Foley and was the "former boss of the longshoreman's union on the West Side of Manhattan, whose father ran a speakeasy on Columbus Circle". So it was not his uncle (and godfather) who ran the place, but rather his uncle's father. That makes more sense, because his uncle would have had to have been pretty young in 1925.

Additionally, knowing the uncle's family's last name (Foley) should make it even easier to uncover some evidence of the existence of Jack's, but I'm still coming up empty.

So it would seem that the famous Jack's restaurant that "proudly passed on" the title of New York's best steakhouse to Uncle Jack's was, assuming it existed at all, a little-known speakeasy, not the world-renowned steak joint described on Uncle Jack's website.

While fruitlessly searching for information about Jack's, I did discover a few things about Mr. Degel. He has opened two additional Uncle Jack's locations, in Manhattan, and owns an "organic" eatery in Nassau County called Jack's Shack, which is "more than a restaurant — it's a laid-back lifestyle that Mother Earth would be proud of." He was also the host of Restaurant Stakeout, the highly staged "reality" show that aired on the Food Network for five seasons.

Moving on to legal matters, I learned that Mr. Degel was convicted of credit card fraud in 1994. The charges stemmed from his relationship with Lou Ferrante, the former mafia associate turned Orthodox-ish Jew/author of books about mob life and "how the dreaming brain can see the future"/host of the Discovery Channel's Inside the Gangsters' Code.

Mr. Degel also has a third-degree assault conviction on his record for his part in a 1991 incident that reportedly began with him and another man harassing employees at a White Castle in the early morning hours. When an off-duty police officer stepped in, Mr. Degel held back a security guard while his companion beat the officer in the face.

But that's not all! In 1996, the Daily News said Mr. Degel was "awaiting sentencing in another federal hijacking and robbery indictment last year. Sources said Degel is cooperating with federal prosecutors in the case, which has resulted in five guilty pleas."

And while we're on the subject, let's move over to the civil cases. Mr. Degel recently agreed to pay $900,000 to settle a lawsuit in which his employees accused him of "failing to pay . . . minimum wages, overtime wages, spread of hours pay, uniform allowances and . . . misappropriating tips at three restaurants." He has also been sued by his former housekeeper, who claims he didn't pay her overtime wages.

On a final note, Mr. Degel once paid $10,000 for a 1,000-pound cast-iron bull statue that he had installed without a permit in front of Uncle Jack's here in Bayside in 2002. Just over a week after it was put up, the bull was torn down by vandals who severed its horns, tail, and hind legs. Mr. Degel vowed to repair and reinstall the bull, this time atop a sturdy granite pedestal, but I don't know if that ever happened. From 2007 on, the bull is absent from all Street View photos of the restaurant.