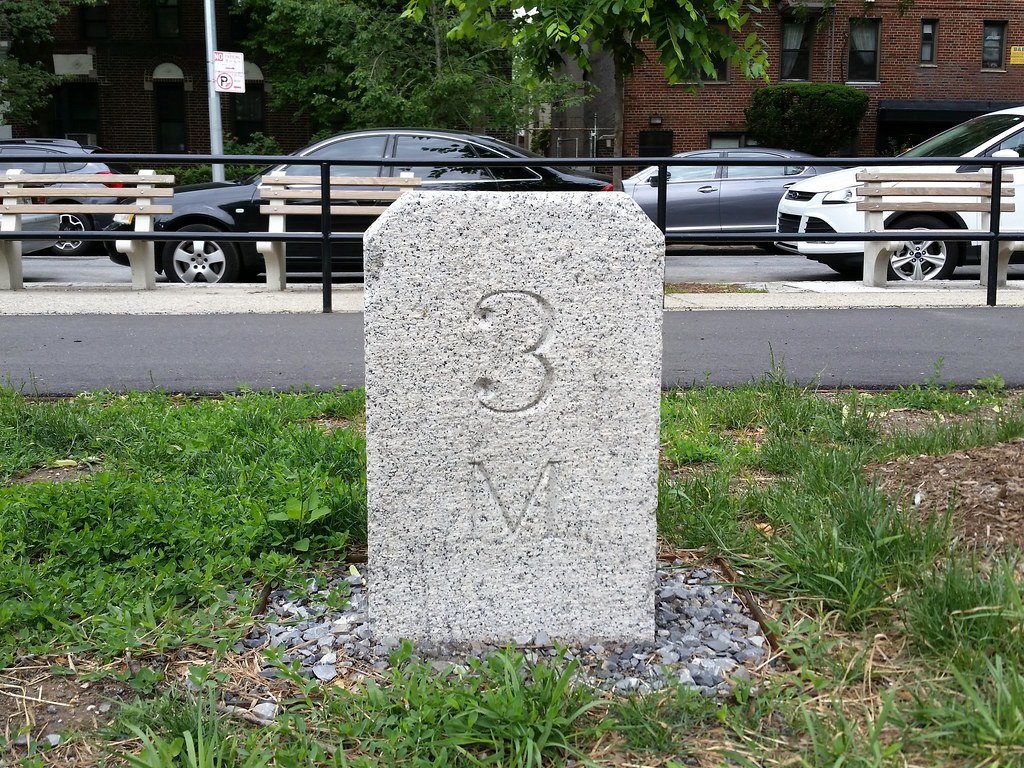 Stones like this one just south of Avenue P were once stationed every half mile on Ocean Parkway, marking the distance along the road's original 5.5-mile route from Prospect Park to the beach at Coney Island. (3M means 3 miles from Prospect Park.) They were probably installed around 1876, the year the parkway was completed.

After the 5M marker was removed several years ago — sometime between November 2007 and September 2009, during which time new concrete was laid over the area where it stood — the 3M stone became the final survivor. It was temporarily removed for restoration while the Ocean Parkway Malls in this area were being reconstructed in 2014, but now it's back home and is even accompanied by a tablet explaining its significance.

In the old days, milestones could be found along a number of prominent thoroughfares in what is now NYC. (You can see a nice collection of photos in this extensive paper on the subject.) Many of the stones have long since vanished, while many others have been relocated to historical institutions for safekeeping (like the one that once stood in Milestone Park). As far as I know, this Ocean Parkway stone is the last one in the city still standing more or less in its original location.

There are four other milestones I'm aware of that are located outdoors in the five boroughs and accessible to the public:

1) A milestone from a section of the Kingsbridge Road that is now part of Broadway can be found embedded in a retaining wall at the edge of Isham Park in Inwood. Likely dating from 1813, the timeworn stone once read "12 Miles from N. York".

2) Another weathered Kingsbridge Road stone is on display outside the Morris-Jumel Mansion in Washington Heights. It too likely dates from 1813, and it read "11 Miles from N. York".

3) A circa-1860 milestone from Jackson Avenue (today's Northern Boulevard) stands outside the Queens Historical Society in Flushing. It bears two inscriptions: "5 MILES TO 34TH STREET FERRY" and "1 MILE TO FLUSHING BRIDGE".

4) A stone reading "6 Miles to N. York F." — 6 miles to New York ferry — is located in front of the Third County Courthouse in Staten Island's Historic Richmond Town. It turns out that this stone is a replica, however. In a phone conversation, the chief curator at Historic Richmond Town told me that it was created in the 1980s and was based on two original milestones that once stood on Richmond Turnpike (today's Victory Boulevard).

Day 500: This street sponsored by Sharpie