Metroplex on the Atlantic 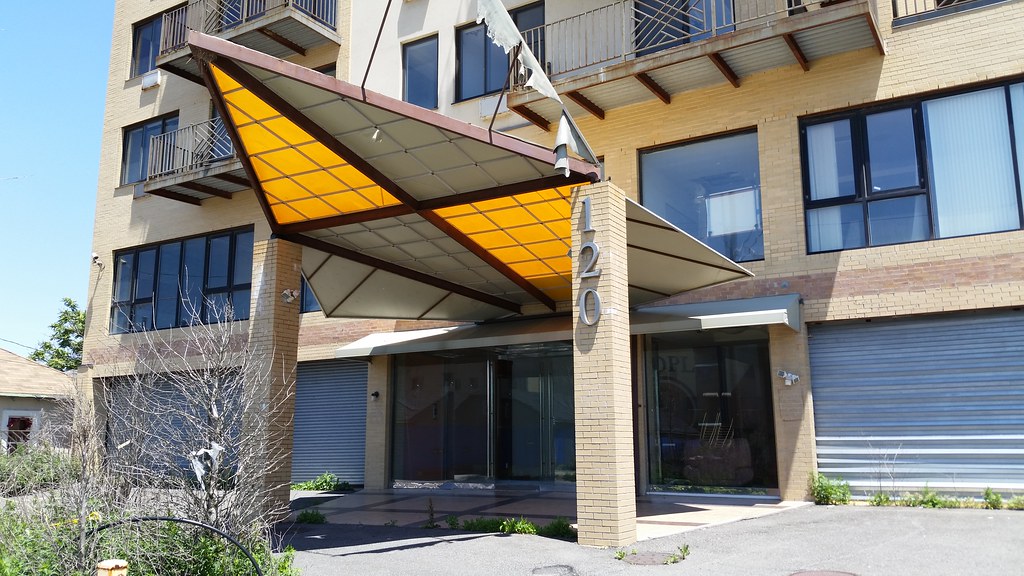 2006: Construction was halted for months when the developers were sued by Richard George, the litigious head of the Beachside Bungalow Preservation Association, for building on top of an easement that ran down the middle of the block and provided residents of the block's interior bungalows with their own passageway toward the beach. Gary Rosen, a lawyer for the developers, told the NY Times that the delays were costing his client $3,000 per day and were threatening to bankrupt the project — "He's already cost my client more money than those bungalows are worth." Mr. Rosen said he was countersuing Mr. George and would "take all the bungalows if I win . . . Most of them are garbage anyway. They're shacks."

2007: State inspectors determined that the Metroplex was, in violation of a previous order, being erected within 100 feet of a coastal erosion hazard area. While dismantling a third-floor balcony that had been illegally constructed, a worker not wearing a safety harness fell 25 feet to the ground and "sustained internal injuries".

2010: The developers defaulted on their mortgage payments and the lender began foreclosure proceedings.

2014: The state attorney general sued the developers for "persistent fraudulent and illegal practices" — including a rent-to-buy scheme that concealed the building's perilous finances from the would-be homeowners.

UPDATE (Nov. 3, 2016): Now known as Ocean Blue, the former Metroplex has reopened under new owners as a rental building. It's so depressing reading these real estate articles; they're full of soulless quotes from people promoting their buildings with meaningless claims ("truly offers a lifestyle unlike any other building") and false information. According to Ocean Blue's "exclusive agent", quoted in the article linked above:

My favorite thing about Rockaway would have to be its centralized location. One of the reasons Ocean Blue has gotten so full so quickly is because it's so close to just about anything you want. You're close to Long Island and Manhattan, the Five Towns, JFK airport, St. Johns Hospital.

Ocean Blue (is) eight blocks from the Atlantic Beach Bridge, and so close to Manhattan you have a perfect view of the skyline from your terrace.

"Its centralized location"? This building is about as un-central as it gets in NYC. It's located in the southeastern corner of Queens, farther from Manhattan than anywhere else in the city outside of southern Staten Island.

"Eight blocks from the Atlantic Beach Bridge"? For one thing, being close to that bridge, located just over the city line in Nassau County, means that you're a long way from Manhattan. You can't be close to one without being far from the other. Additionally, the eight blocks assertion is simply untrue. Take a look at a map. The streets out here aren't on a regular grid, so measuring distances in terms of blocks is tricky and kind of pointless, but I'd say a reasonable estimate would have to be at least 15 blocks. Why even bother lying about this? Is proximity to a bridge that leads from one beach to another beach such a big selling point? It wouldn't seem to be as important as, say, the distance to the closest subway station, which the building's website falsely claims is five blocks. (It's about ten in reality.) While we're on the subject of the building's website, I should note that the home page is currently advertising apartments with "1 BEBROOMS" and also ones with "2 BEBROOMS".

"Perfect view of the skyline from your terrace"? First of all, that presumes that your apartment is at least a few floors up and has a terrace that looks out on Manhattan. And even if that is the case, I doubt you'll find your view of the skyline "perfect". Here's a photo of the view from the building's website. Can you spot the slightest hint of a Manhattan skyscraper? In person, the Lower Manhattan skyline, about 15 miles away, would be visible, though very distant, immediately to the left of the Seaview Towers, those twin dark-brick high-rise apartment buildings just right of center in the middle distance. The Midtown skyline, on the other hand, is obscured from view with almost comical precision by the Seaview Towers building on the right. Looking at the larger picture, however, I'd say the overall view from the upper floors of Ocean Blue is quite impressive, so why lie about features it doesn't have?