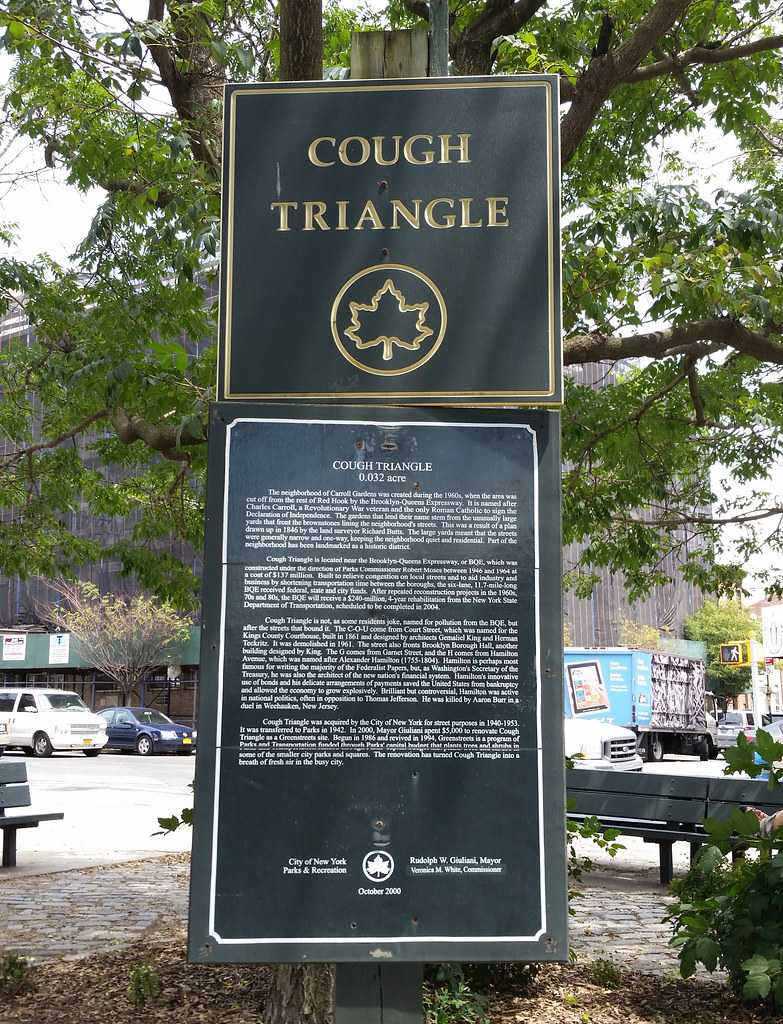 Cough Triangle is not, as some residents joke, named for pollution from the BQE, but after the streets that surround it. The C-O-U come from Court Street, which was named for the Kings County Courthouse, built in 1861 and designed by architects Gemaliel King and Herman Teckritz. The building was demolished in 1961. The G comes from Garnet Street, and the H comes from Hamilton Avenue, which was named after Alexander Hamilton (1755-1804).

Only former Parks Commissioner Henry Stern could have come up with such a weird name in such a weird way. (And, indeed, the Parks webpage quoted above confirms that this tiny triangle was turned into a green space in 2000, during Mr. Stern's second stint as commissioner.)

Having a good feel for his wacky and mordant sense of humor at this point, I feel comfortable saying, despite the Parks Department's claim to the contrary, that Mr. Stern was almost certainly thinking about the air pollution from the adjacent, traffic-clogged Brooklyn-Queens Expressway (BQE) when he named Cough Triangle.

I can picture it now: He's looking at the triangle on a map, trying to come up with an interesting name. (He's never been one to settle for a run-of-the-mill appellation, not even for a minuscule piece of parkland like this.) After noting the site's proximity to the exhaust-spewing BQE and the "miasmic, fetid" Gowanus Canal, he turns his focus to the names of the surrounding streets, a common source of inspiration for him. Court, Garnet, Hamilton. Court, Garnet, Hamilton. And then, to his great delight, it hits him. Five simple letters that are not only an authentic product of the local street nomenclature, but also an oblique jab at the area's questionable air quality. COUGH! Chalk another one up for the maestro.