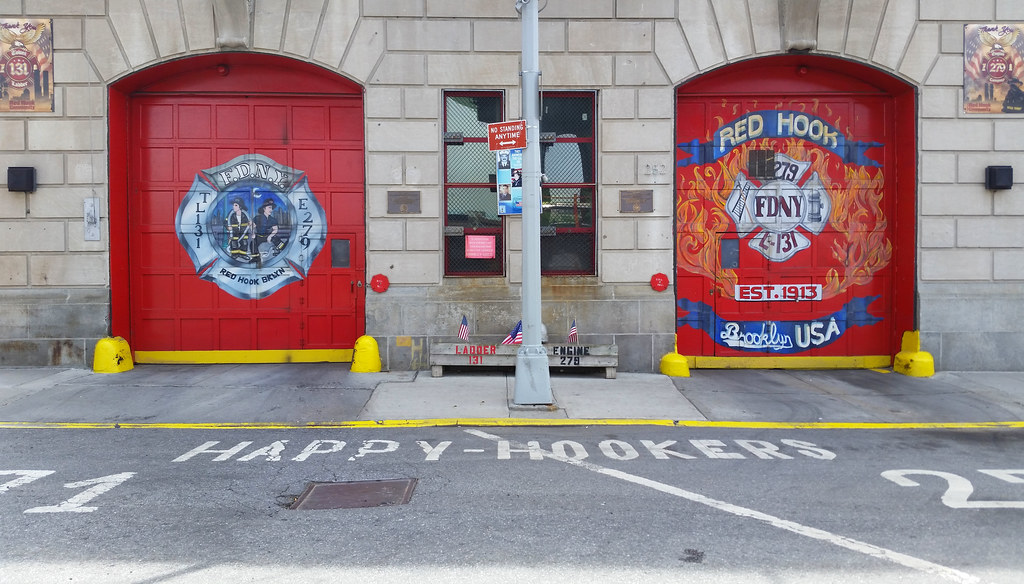 The companies stationed at this Red Hook firehouse, Engine 279 and Ladder 131, have long referred to themselves as the Happy Hookers (Red Hook, hook and ladder — get it?). But the FDNY ordered them to drop the name in 2005, part of a department-wide push to clean up company nicknames following a pair of ugly incidents — a sex scandal and a firehouse brawl — involving companies nicknamed Animal House and Southern Comfort, respectively. (Other "unbecoming" company nicknames called out by a 2005 Department of Investigation report: the Nut House, the Harlem Zoo, 90 Proof, Clown College, and First at the Bush.)

Despite the FDNY's demands, the Happy Hookers refused to remove their nickname from their firehouse door. The name remained there (photo) until 2008, when the FDNY reportedly sent someone out to paint over it. It was long gone by the time I first walked by in 2012; not knowing the companies' nickname, I was puzzled by the accompanying image of two suggestively posed firefighters that remained (and still remains) on the door.

I don't know if the FDNY has loosened up in recent years or if the firehouse just decided to defy the higher-ups once again, but, as you can see, the Happy Hookers name is now prominently painted on the street in front of the firehouse, and it also appears on a pair of plaques honoring the 2013 centennials of Engine 279 and Ladder 131.