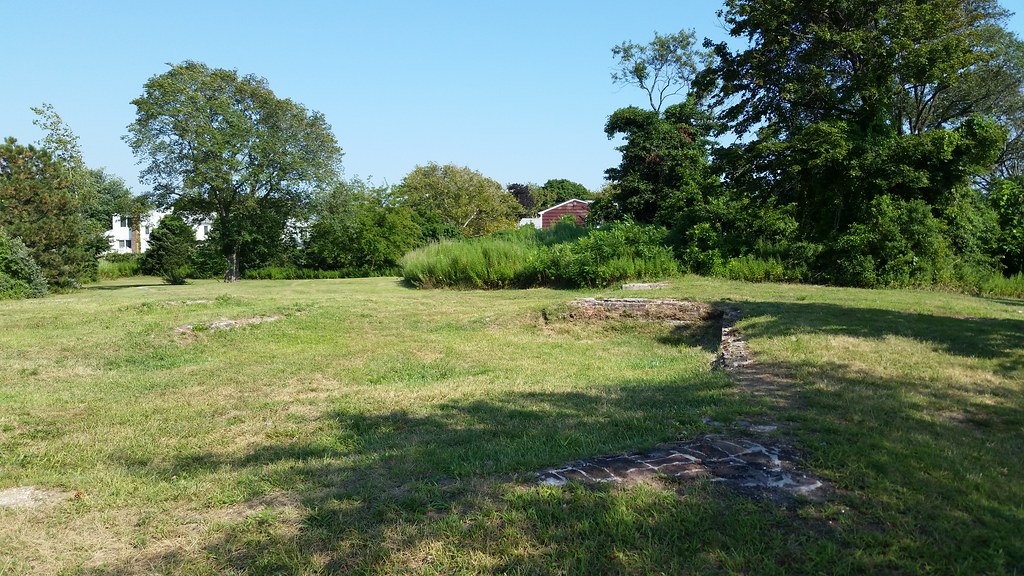 Bayswater Point State Park is the former site of "what may have been the biggest mansion to go up in Far Rockaway", a 175-foot-long "mix of Tudor and other English styles" (old pictures here and here) built around 1907-08 by the banker Louis A. Heinsheimer. Mr. Heinsheimer wasn't given much time to enjoy his luxurious new palace, however: he died in early 1909 following an operation for appendicitis.

In 1925, with "Far Rockaway [having] lost most of its pretensions of grandeur", Mr. Heinsheimer's brother donated the mansion to a hospital to be used as a "convalescent home for crippled children". According to a 1987 Time magazine article, the house subsequently served as

a private school for retarded children and later a rabbinical school. Now it is a bag lady of a building. A fire has destroyed much of the roof; plants grow in piles of rubble; the bones of rodents lie in corners. Vandals have smashed windows and sprayed the walls with graffiti.

The article goes on to describe how a salvage company was at that time removing "window frames, carved moldings, gargoyles and anything else of architectural interest that can be pried loose and sold" prior to the house being demolished and the property turned into parkland.

The only part of the structure left standing in the park was the conservatory, seen in this 1996 aerial image, although that too has come down in the years since. The mansion hasn't quite been wiped off the face of the earth, however. As pictured above, its foundation can still be seen poking up through the grass in the middle of the park (aerial view).