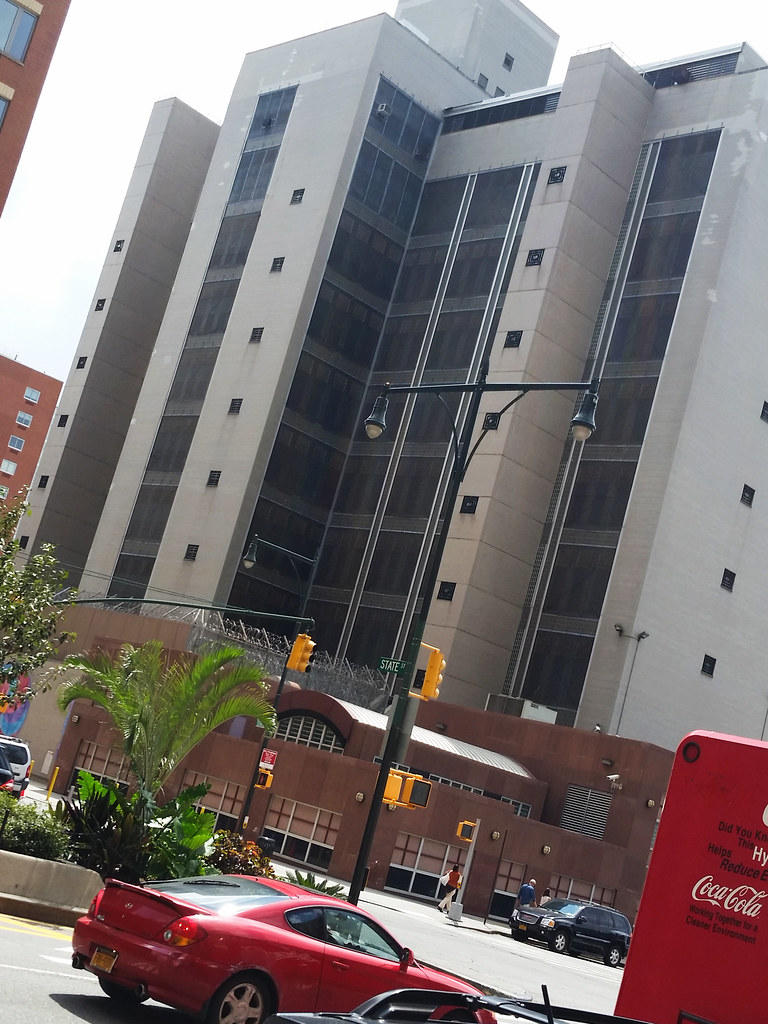 When the Brooklyn House of Detention reopens next week after being closed since 2003, it may be the only city jail in America located down the block from a Barneys Co-op and a Trader Joe’s.

The building, a 1950s gray behemoth with screens covering its metal-framed windows, looms incongruously over one full block of Atlantic Avenue and rejoins a greatly changed neighborhood.

During the jail’s vacant period, six high-rise apartment buildings were constructed nearby. One boutique hotel now sits directly across from it on Smith Street, and 14 sleek, six-year-old, modern town houses sit next to handsome brownstones, just steps from an entryway covered in barbed wire where prisoners are unloaded when they arrive.

Some nearby residents in the Boerum Hill neighborhood expressed concerns about safety, while others, in typical New York fashion, worried about parking.

On the occasion of the jail's reopening in 2012, the blog McBrooklyn published a list of "notorious escapes" by the facility's inmates over the years, including these two:

The short, beefy man strolled into the Brooklyn House of Detention, signed the visitors' log—"Michael Schwartz" —and asked to see his client. While the lawyer waited in a glass-enclosed meeting room on the first floor, a guard went to escort the prisoner down from his maximum-security cell on the tenth floor. The prisoner, clad in a jumpsuit and in need of a shave, greeted Schwartz, and the two began conferring in private. During their talk, the guards changed shifts; shortly thereafter, the new guards watched a clean-shaven man in a gray tweed suit sign out—"Michael Schwartz"—and stroll out of the prison and into thin air.

The man in the gray suit was not Michael Schwartz but the jumpsuited prisoner, Howard ("Buddy") Jacobson, 49, successful horse trainer, real estate entrepreneur and convicted murderer. The man he left behind turned out not to be Michael Schwartz either, but Anthony DeRosa, 47, onetime bartender and a longtime pal of Jacobson's. When DeRosa himself tried to leave the prison, a guard asked him where his "client" had gone. Only then did prison officials belatedly sound the alert.

(Jacobson was rearrested about six weeks later in the Los Angeles suburb of Manhattan Beach while talking on a payphone at a restaurant where he had ordered "the house specialty, fried zucchini with Parmesan cheese".)

A murder suspect escaped from a maximum-security cell in a Brooklyn jail after making a dummy of wadded-up clothes and leaving it under the tattered woolen blanket on his cot, prison officials said yesterday.

It was the second time that the 26-year-old inmate, Edward (Donny) White, had escaped from custody. The last time he did, he killed a man during a robbery, the police said.

The officials had no explanation for how he had escaped from his windowless fifth-floor cell at the Brooklyn House of Detention, 275 Atlantic Avenue in the Boerum Hill section. Thomas Antenen, a spokesman for the Department of Correction, said the lock on the cell door had not been jimmied and the bars had not been bent or broken. Correction officers speculated that he might have slipped into a garbage cart while he was outside the cell around dinnertime.

Mr. White's first escape, in July 1989, came when he hurled a typewriter at a detective at the 67th Precinct station house in the Flatbush section of Brooklyn while being questioned about another murder. He got away by jumping through a second-floor window and shinnying down a flagpole.

A follow-up story ran in the Times on August 31, 1991, under the headline "Escaped Killer Seized in Brooklyn, by Chance":

When police officers investigating the slaying of a bartender at a Second Avenue pub late Thursday knocked on the door of a Brooklyn apartment yesterday, the man in the bathrobe who answered turned out to be an escaped murderer who was one of the city's most wanted fugitives.

I also learned from McBrooklyn about a riot at the jail in 1970, one of four jailhouse riots in the city that began over a span of three days that October. The inmates, calling for "swifter trials, lower bail and more humane treatment", took a total of 26 guards and other employees hostage citywide, including 3 here in Brooklyn. Despite the lawlessness of their protests, their demands were met with support from some elected officials. Representative Adam Clayton Powell Jr., standing outside the jail in Long Island City where the riots began, told reporters, "Those cats upstairs are doing the right thing", and yelled up to the inmates, "Don't give up one inch. Keep up this fight!"

The Brooklyn riot lasted only 12 hours before the jail was retaken by force, but the melee caused what one prison official estimated to be $2 million in damage. Nonetheless, the acting warden at the overcrowded facility, which held 1,591 men in a building designed for 960, sympathized with the inmates, saying that "he did not blame the prisoners for harboring grievances. 'They didn't have anything against the prison itself or the guards,' he said. 'They don't like the court system. It takes too long. And I agree with them.' "

Day 10: Another nice collection of footwear