An abundance of celosia 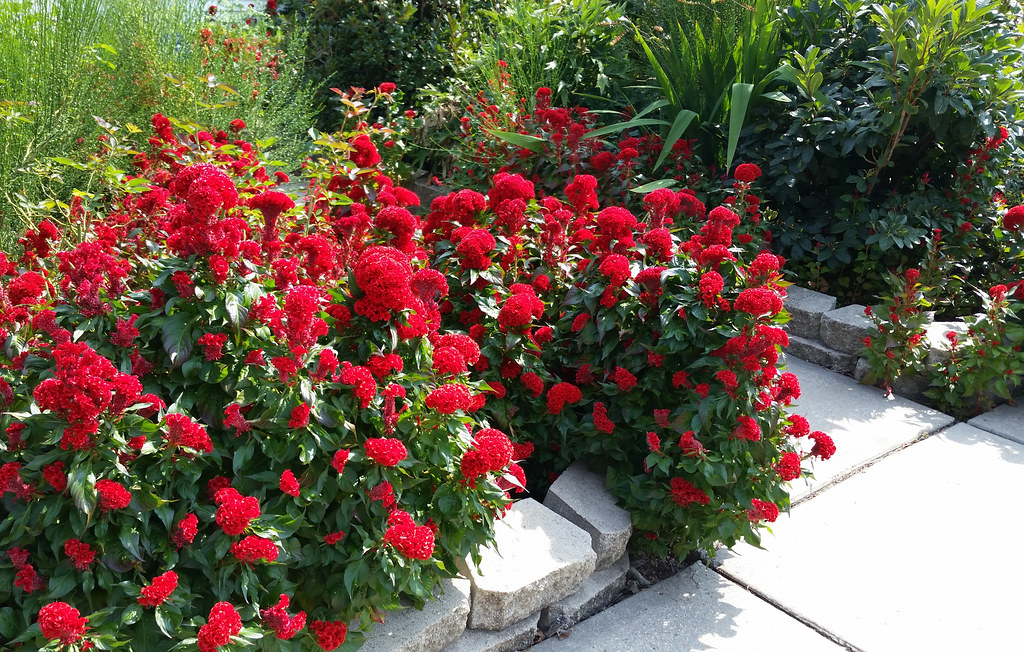 Celosia can be found blooming in gardens across the city in a range of bright colors. The flower heads often look like feathery flames (as we've seen) or spiky bottle brushes, but there is also a popular variety, pictured above, whose heads are curled up like brains, the result of fasciation.

Celosia is grown as an ornamental here in the US, but, as its nickname "Lagos spinach" suggests, it's an important food crop in parts of Africa:

It is one of the leading leaf vegetables in south-western Nigeria . . . It is extremely important as well in southern Benin, also popular in Togo, Ghana and Cameroon, and recorded as a vegetable from several other West and Central African countries. . . .

Celosia is primarily used as a leafy vegetable. The leaves and tender stems are cooked into soups, sauces or stews with various ingredients including other vegetables such as onions, hot pepper and tomato, and with meat or fish and palm oil. Celosia leaves are tender and break down easily when cooked only briefly. The soup is consumed with the staple food of maize, rice, cassava or yam. The young inflorescences are also eaten as a potherb.

I've come across translations of the plant's name in a few different African languages:

Soko yòkòtò in Yoruba means "make husbands fat and happy" or “the vegetable that makes your husband’s face rosy".

Eri ami onu in Igbo means "you eat you suck your fingers" or "licking your lips while eating".

And one more, with a little extra info:

They propagate easily, require little care, and often reseed themselves year after year. Kaphikautesi, a name used for this plant in Malawi, means "eaten by lazy ones," a recognition that not only are the plants easy to produce but that they cook quickly and with little fuss or fuel.

Day 488: Are you telling me that you built a time machine...