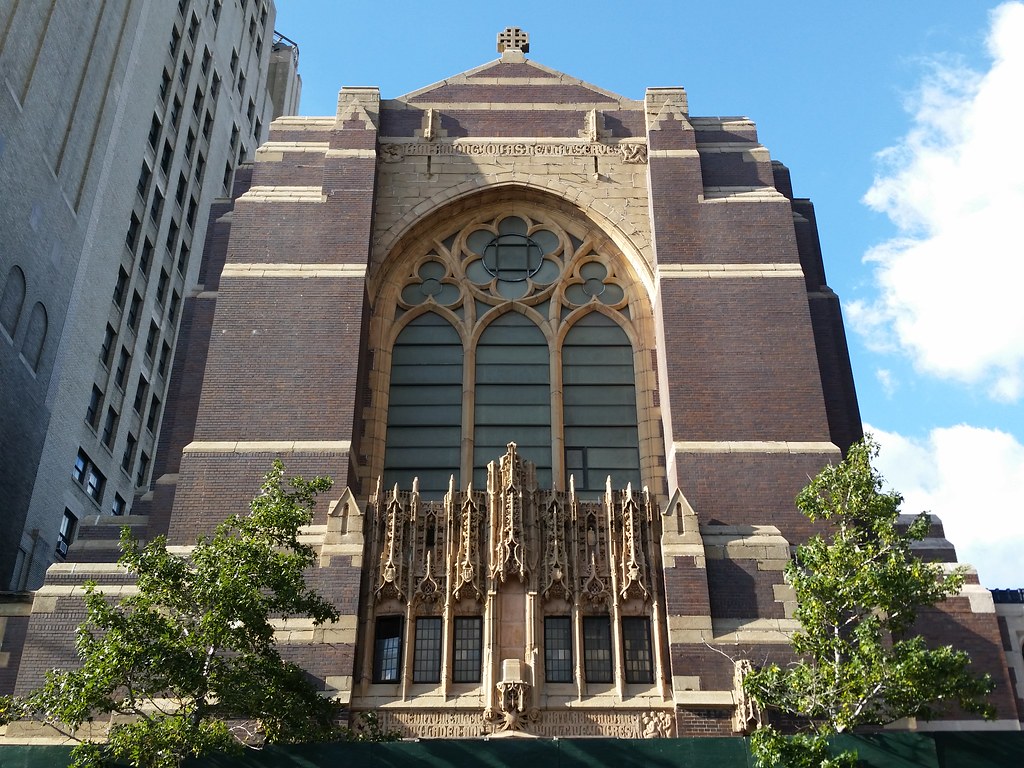 The most striking thing about this church, built 1929-1931, is not its unique, imposing architecture ("Gothic restyled in modern dress . . . that might be termed cubistic Art Moderne"), but rather something much more commonplace — three commercial storefronts! This church is not just a house of the Lord; it's also the home of a restaurant, a convenience store, and a deli.

(The only similar thing I can ever remember seeing is a church in Arlington, Virginia — another United Methodist church — that leases its ground floor to a gas station [Street View]. I've always thought that church's slogan should be "Fuel for your eternal combustion engine".)

My first thought was that these storefronts must have been carved out sometime in the past few decades. It's not uncommon to hear of a once-thriving church falling on hard times as its congregation dwindles. I figured this church must have been in a similar bind and decided to rent out parts of its building in order to make ends meet.

If you view old images of the church, you don't see any large commercial signs on the outside like you do today. This seemed to confirm the idea that the storefronts are a fairly recent creation.

But then I looked closely at this circa-1940 tax photo and started to wonder. It does kind of look like there may have been independent, standalone storefronts in the locations where they are today. There are also some not-very-church-looking diagonal stripes by the archway at the far left.

This 1930 photo, taken late in the construction process, shows a financial campaign headquarters (presumably a temporary operation established to raise money for the church's construction) located in the rightmost storefront, where the deli is today. This seems to hint at the idea that today's storefronts may have always been separate units of the building, whether or not they were initially intended to be used commercially.

I finally found some fairly conclusive evidence when I searched the Brooklyn Daily Eagle archives for the addresses of the storefronts (13, 15, and 17 Hanson Place). Between 1938 and 1954, there were a ton of ads for Goldware Exchange, a gold/diamond/jewelry/pawn-ticket buyer located at 15 Hanson Place. (This seems like a particularly weird business to have at a church.)

I also found a couple of mentions, in 1940 and 1941, of a place called the Hanson Tea Room, located at 13 Hanson Place. Then I found a 1933 ad for the tea room that doesn't list the address but says the place is "adjoining Williamsburgh Savings Bank". Because the church is the only building adjoining the iconic Williamsburgh Savings Bank Tower on Hanson Place (they're the only two buildings on their side of the block, in fact), I have no doubt that the tea room existed in the church in 1933.

So at least two of the church's storefronts (and there may have only been two originally; 15 and 17 could have been split later on) were already being rented within seven years of the building's completion. This makes it seem likely that it was part of the church's plan all along to support itself financially by leasing building space to commercial tenants.

Changing subjects, I spotted a newspaper listing for a "womanless wedding" while researching this post. I had no idea what that meant, but it turns out that womanless weddings — comedic performances of weddings with men playing all the roles in the wedding party, "including bridesmaids, flower girls and the mother of the bride" — were quite popular in the first half of the 20th century. They were often staged as large community fundraising events. In fact, our favorite Methodist congregation on Hanson Place put on a womanless wedding in 1930 to raise money for the completion of their new church. (The famous attendees mentioned in the linked article were not actually there; they were characters portrayed in the wedding.)

I found a couple of articles in the NY Times about a womanless wedding being held "for the benefit of crippled children" in Nyack, New York, in 1925, in which the mayor was going to play the bride. The day before the performance, two local men, including the man who was playing the groom, convinced the mayor to get all dolled up as the bride so they could drive around the county advertising the event. Once they returned to Nyack, the men tricked the mayor into stepping out of the car for a minute and then sped off, stranding him in the middle of town in his makeup, wig, and gown. This caused quite a stir, and the police, not recognizing the mayor, arrested him on a charge of "impersonating a female".

The publicity resulting from the arrest drew such huge crowds to the wedding that a second performance had to be scheduled the next night to accommodate everyone. If I'm reading this article correctly, it sounds like the mayor decided he had done enough for the town by getting arrested and locked himself in his office rather than participate in the wedding, but the event was a smash hit nonetheless.

If you're looking to stage a womanless wedding yourself but don't know where to start, I've got good news for you. You can see a script for one, published in 1918, here. You may just want to tweak a few things before presenting it to the public.

I also ran across this 1941 article detailing "a new form of warfare" being developed in Britain. As you probably guessed, the article is referring to troops on roller skates, zipping around at 30 miles an hour, armed with "revolvers, knives, 'knuckle dusters,' and sub-machine guns", and wearing uniforms "reinforced with rubber pads, enabling them to make flying tackles."