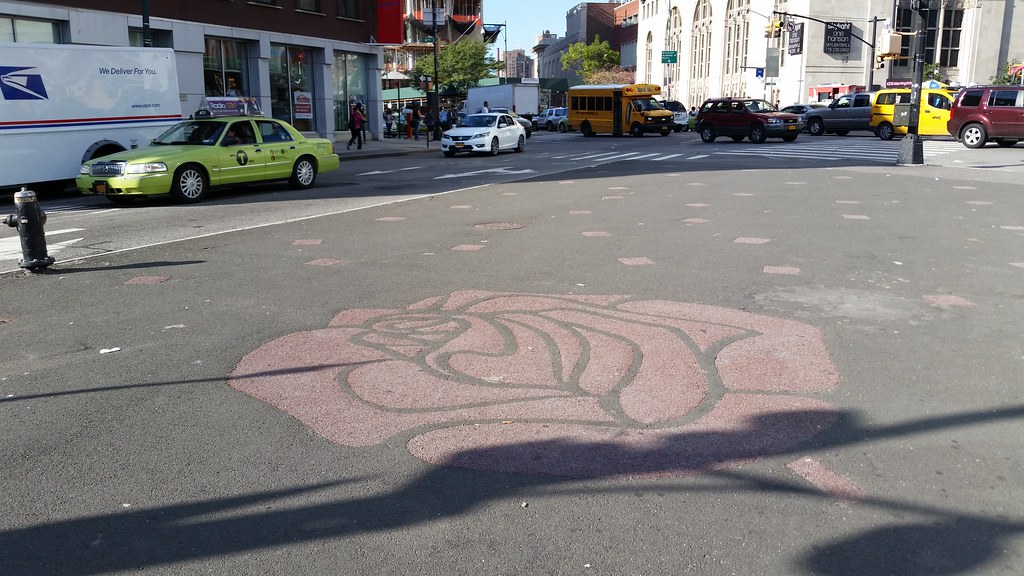 Sometime in 2011 or 2012, the northbound lanes on this block of 4th Avenue just south of Flatbush Avenue were eliminated and an expanded sidewalk took their place. Embedded in the sidewalk is a large stylized image of a red rose.

In trying to determine if the rose has any particular significance to this location, all I could come up with is the fact that the Brooklyn Academy of Music's Rose Cinemas is located nearby, one long block away. (The Peter Jay Sharp Building, which houses the Rose, is visible in the background of this photo, behind and to the left of the school bus.)

But that connection seems like a stretch. Perhaps a rose was selected because it's the state flower of New York. The only thing standing on the small triangular block where the rose is located is an old subway entrance kiosk (the Times Plaza Control House), and the subway is run by the MTA, a state agency.

Or maybe they just put a rose here because people like roses.

The Bronx: day lily (previously the monstrous corpse flower)
Brooklyn: forsythia
Queens: tulip and rose (as seen on its flag), representing the Netherlands and England, respectively, the two nations that controlled what is now NYC during the colonial era
Staten Island: pinxter azalea