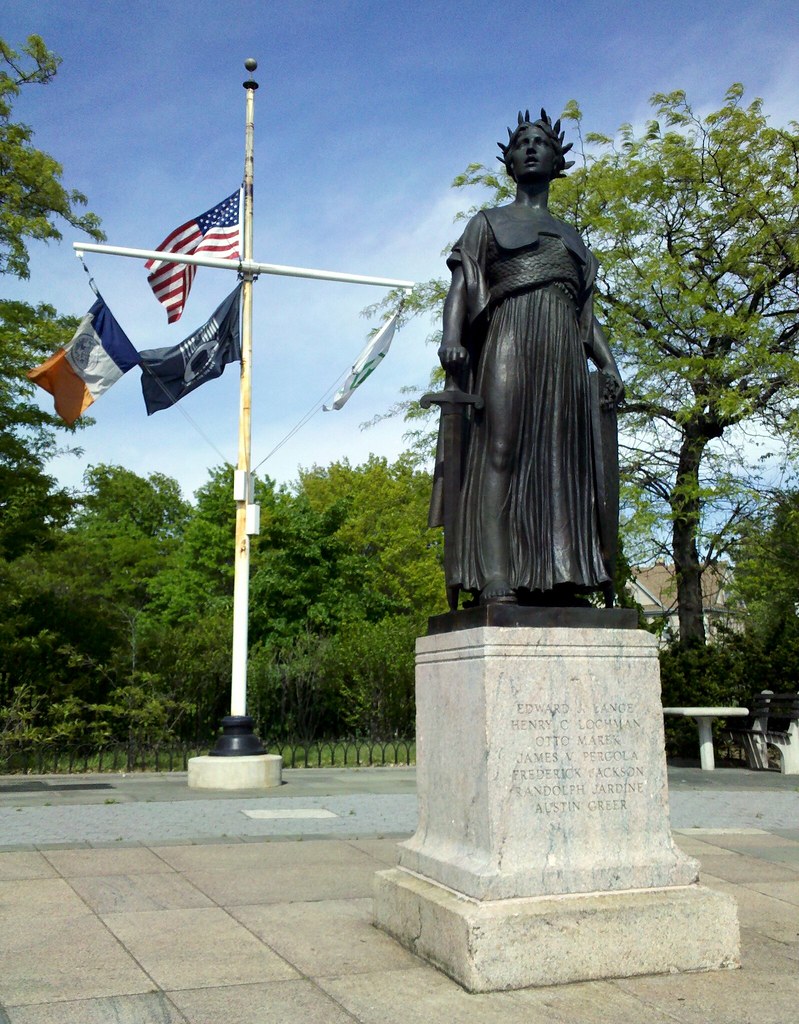 Some tough broad, this one! She's seen more than her share of trouble over the years, getting decapitated in 1989 and dragged onto the BQE in 2001, but now she's back and better than ever. Look at those quads! 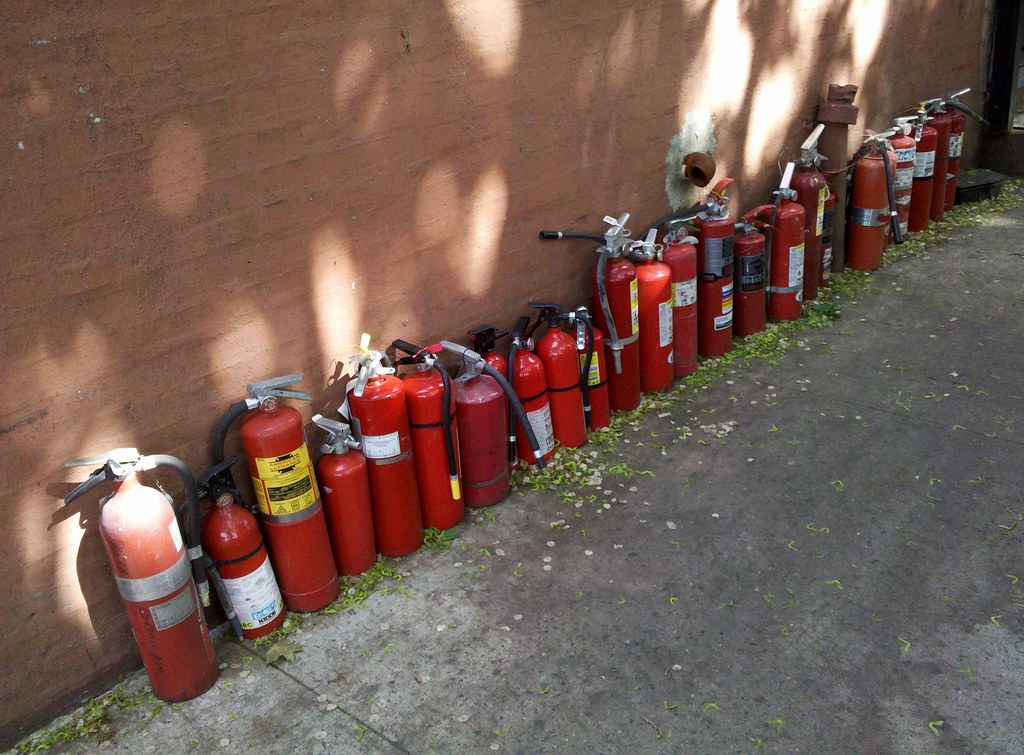 Peace Pilgrim would be proud.

(If you don't know who Peace Pilgrim is, it's time to learn!) 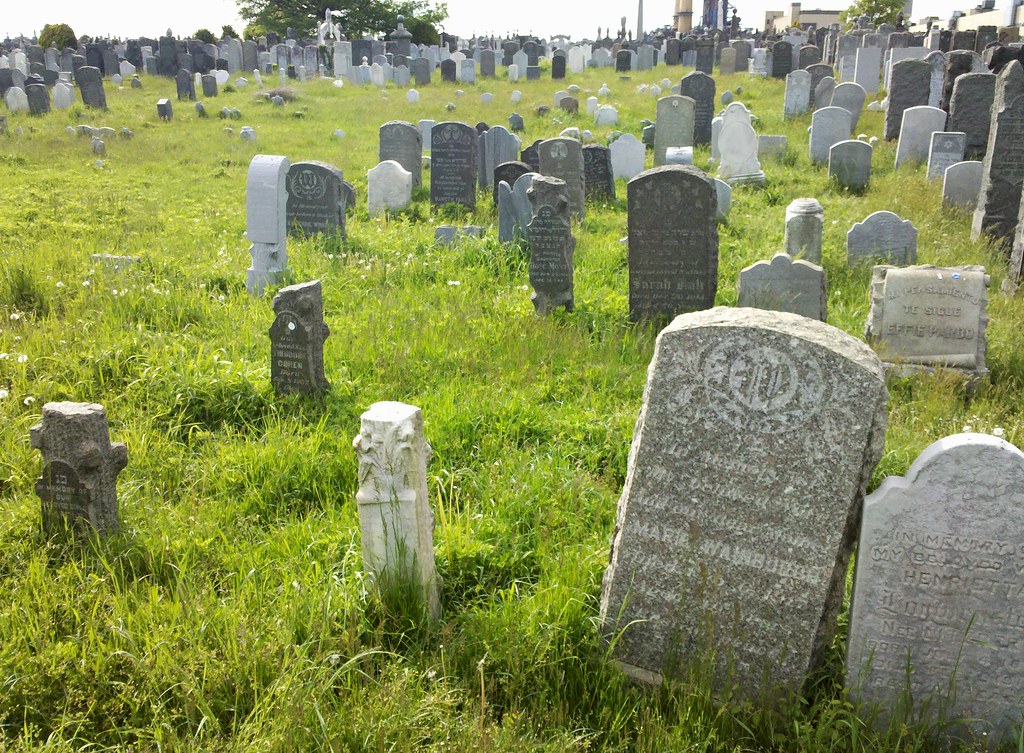 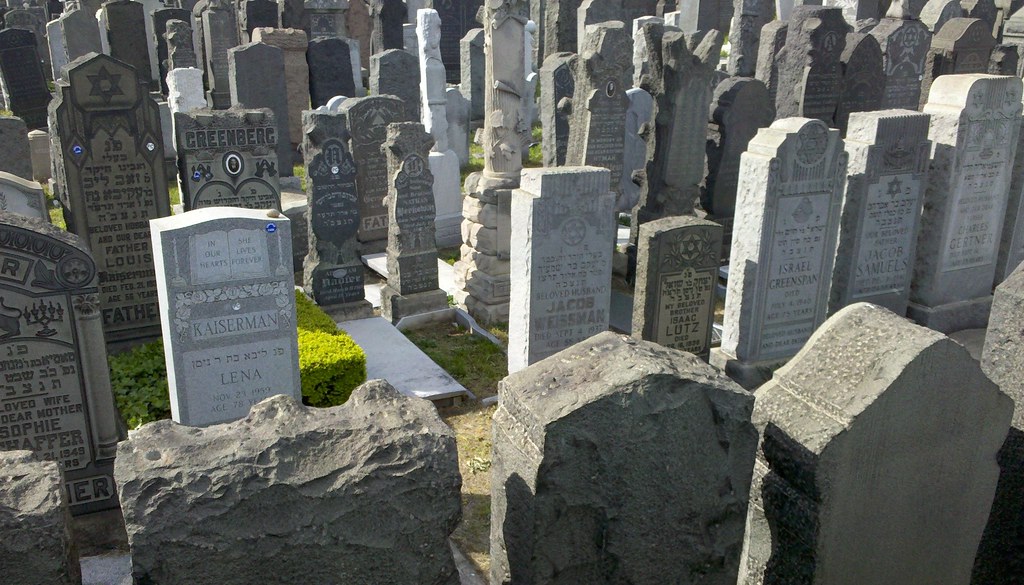 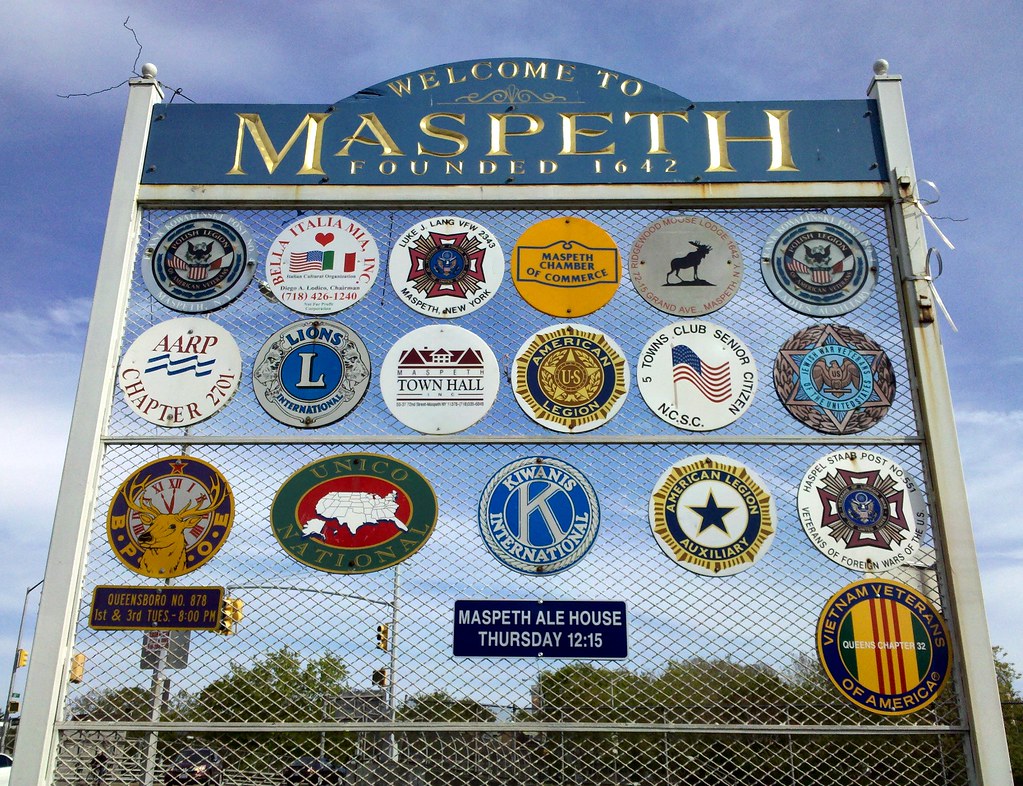 Other than the 1642 founding date, there's not much to distinguish this from the "Welcome to" signs, laden with civic group logos, that I saw in small towns across the country.

Is your dog lazy? 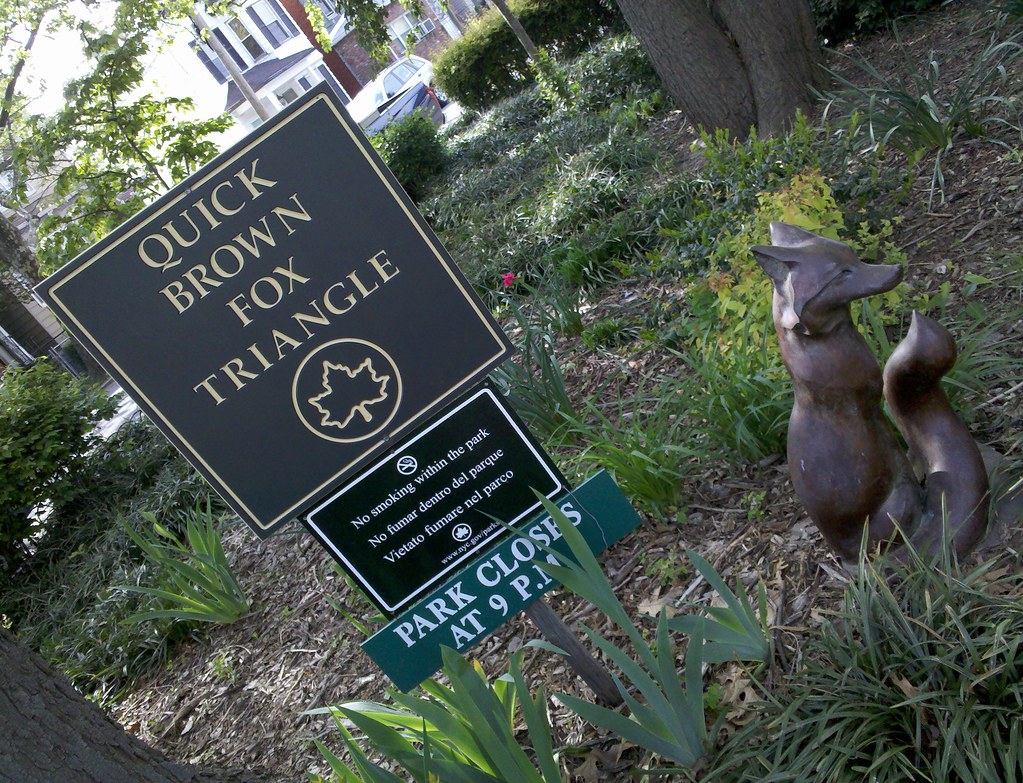 Then jump on over to Quick Brown Fox Triangle and complete the pangram! 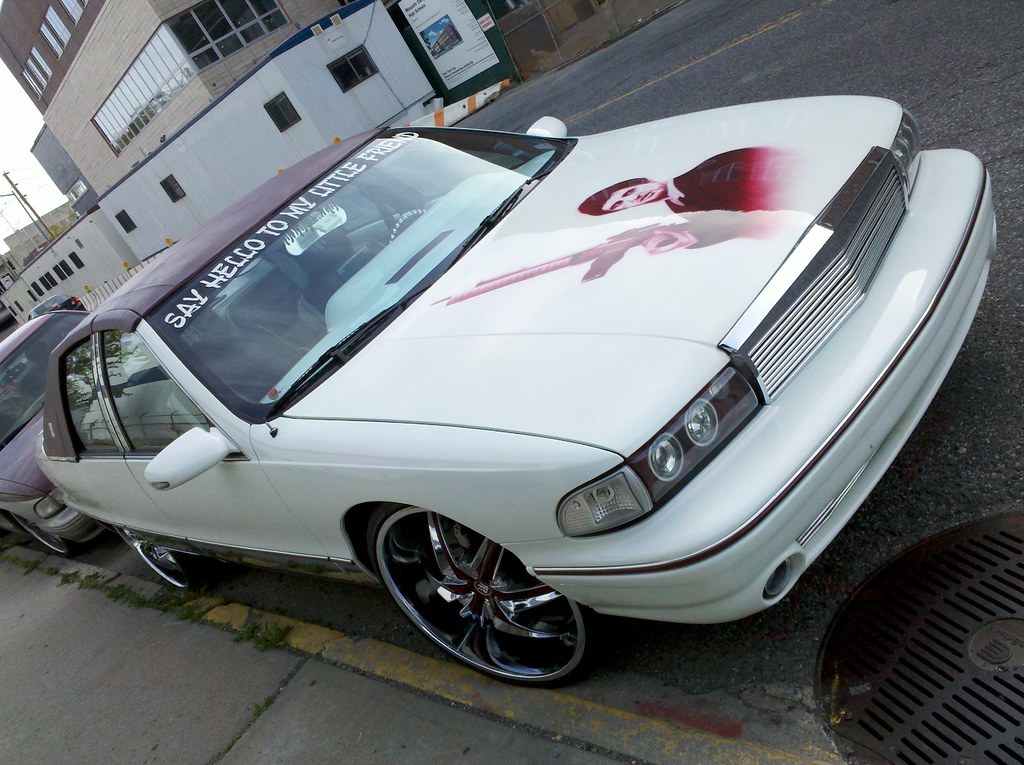 Tony's face is not an uncommon sight on the streets of New York. The back-seat armrest of this image-conscious automobile was stocked with a couple of bottles of Cognac and several glasses waiting to be filled. The stages of the butterfly life cycle are revealed as you follow this winding path through Long Island Mews. 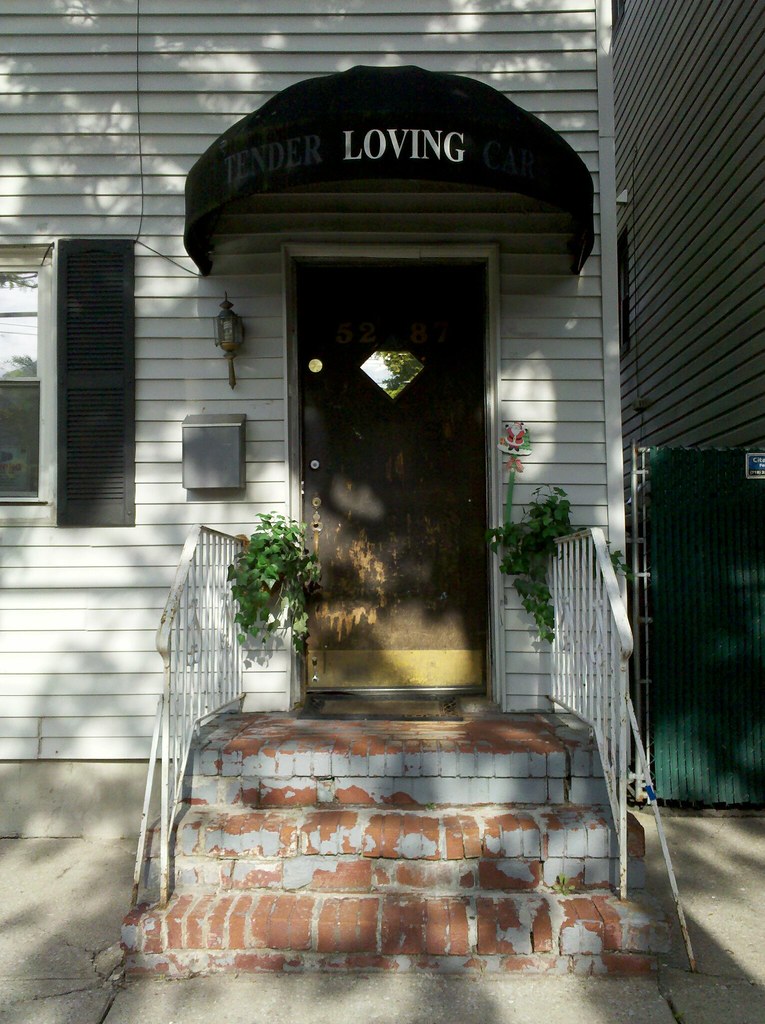 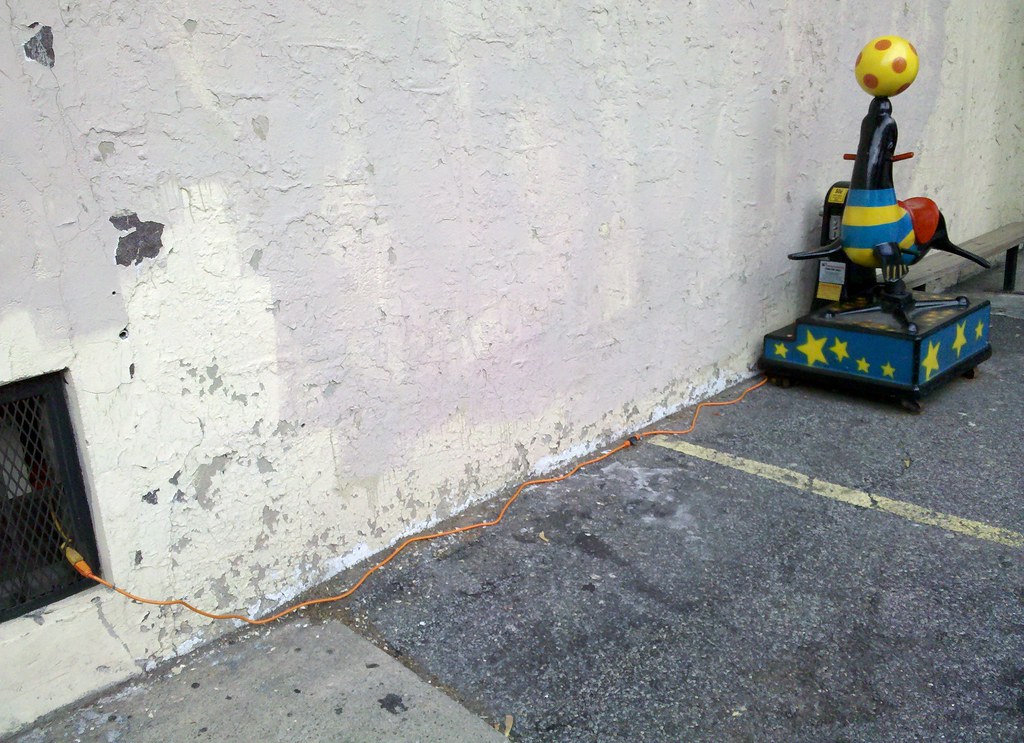 I've done a little asking around, and I seem to be the only one who's never seen a kid riding one of these things. On this site once stood the famous Elmhurst gas tanks, whose massive size and proximity to the oft-congested Long Island Expressway made them a perfect landmark for traffic reports. Surrounded by farmland when they were built (one in 1910 and the other in 1921), the tanks oversaw decades of tremendous change in Queens before being dismantled in the late 1990s.

The tanks each comprised five telescoping cylinders, lending them the surprising ability to vertically expand and contract depending on the volume of gas stored inside. Supposedly the telephone operators at the gas company would sometimes have to settle callers' bets about whether or not the heights of the tanks actually fluctuated.

Another interesting feature of the tanks is that each one had a rowboat moored inside it. Until the 1960s, all interior inspections had to be conducted by boat, with a worker paddling around looking for leaks, floating on the 17 million gallons of water that lay beneath each tank in an underground basin, acting as a sealant.

The equipment pictured above is part of a KidPower playground, wherein children generate electricity for the games they want to play (which themselves involve lots of running around) by peddling stationary bikes. A Ray of Hope, and a Mary of Sendek As I was taking this photo of the parking ramps at the Queens Place mall, an employee saw me and started walking toward me. Generally this means I'm about to get asked, with a fair amount of suspicion, "Hey, what are you doing?" I find this attitude rather disheartening; is it so hard to believe someone might be taking a genuine interest in your home or workplace, rather than trying to screw you over in some way?

Needless to say, I was pleasantly surprised when this gentleman turned out to have approached me for a different reason altogether: to give me a tip on how to better appreciate this obviously (to him, anyway) noteworthy structure: "Pretty cool, huh? You should go online and check out the aerial photo. All these circles — it looks awesome." This revealed a curiosity, an engagement with the world, and a desire to share that were all really encouraging to me. For some reason, the phrase "ray of hope" popped into my head, symbolizing this one success in the fight against being too cool or important or busy to care about things like neat-looking parking ramps. So you can imagine my shock when I caught a glimpse of his ID badge and saw the name printed on it: Raymond Hope.

The previous sentence is not true.

So, without further ado, here is the aerial photo. Ol' not-Ray was right: there's certainly some unusual geometry at work here. But the circles are only part of the story.

This mall was originally an enormous Macy's department store that opened in 1965. Two years earlier, Macy's began buying up all the land on the irregularly shaped five-acre block where the mall now sits. Everyone sold out except for one little old lady, a widow by the name of Mary Sendek (or Sondek, depending on your source), who lived at the corner of Queens Boulevard and 55th Avenue. The proposed layout of the arena-like store called for only a slight intrusion into her backyard, but rather than shrink the circle by a few feet, Macy's decided to start building the original design, assuming she was just holding out for more money and could be bought off before the construction reached her property.

Macy's offered as much as $200,000, but Ms. Sendek refused to budge. She apparently had a dog she was very fond of, and didn't want to deprive him of the spacious backyard he so enjoyed. So Macy's had to cut a little notch (clearly visible from above) out of their otherwise perfect circle to skirt the edge of her backyard. Here's a great photo of her house standing alone against the immense, indented facade of the store.

Ms. Sendek died some years later, and a strip mall was built on her former property. As you can see, it takes up the full extent of the lot, all the way into the notch in the wall. Her legacy lives on. 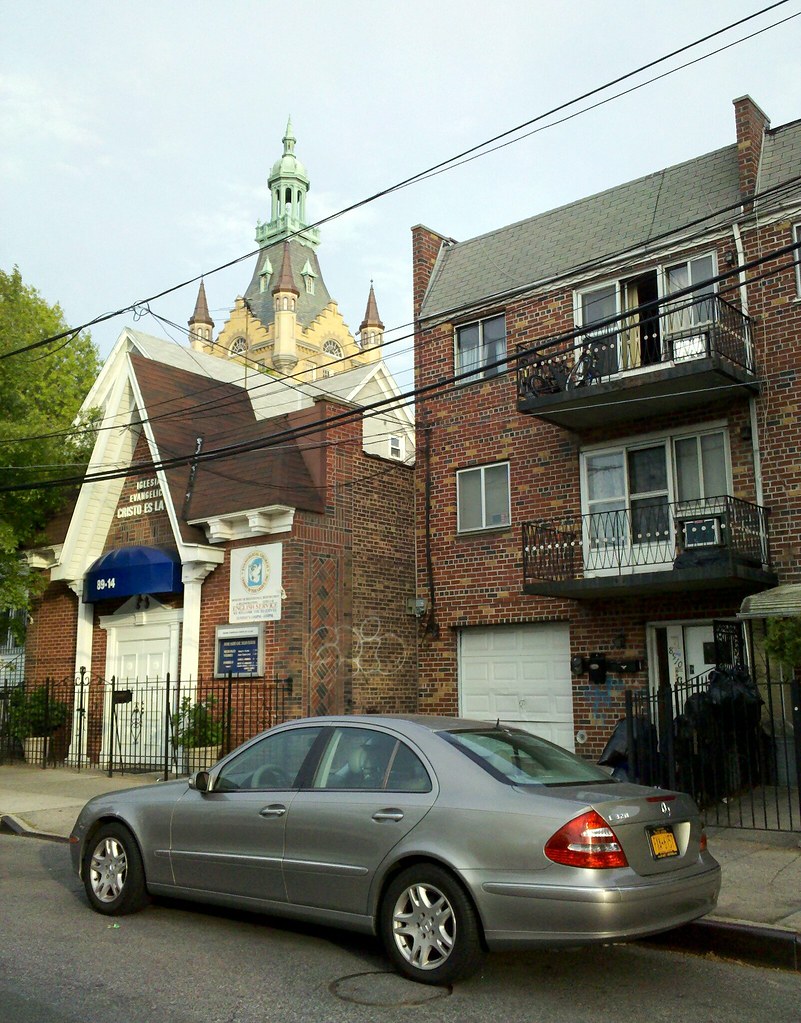 Why, it's Newtown High School! Currently housed in an old A&P supermarket, this temple was founded by the late Swami Jagdishwaranand in 1972.