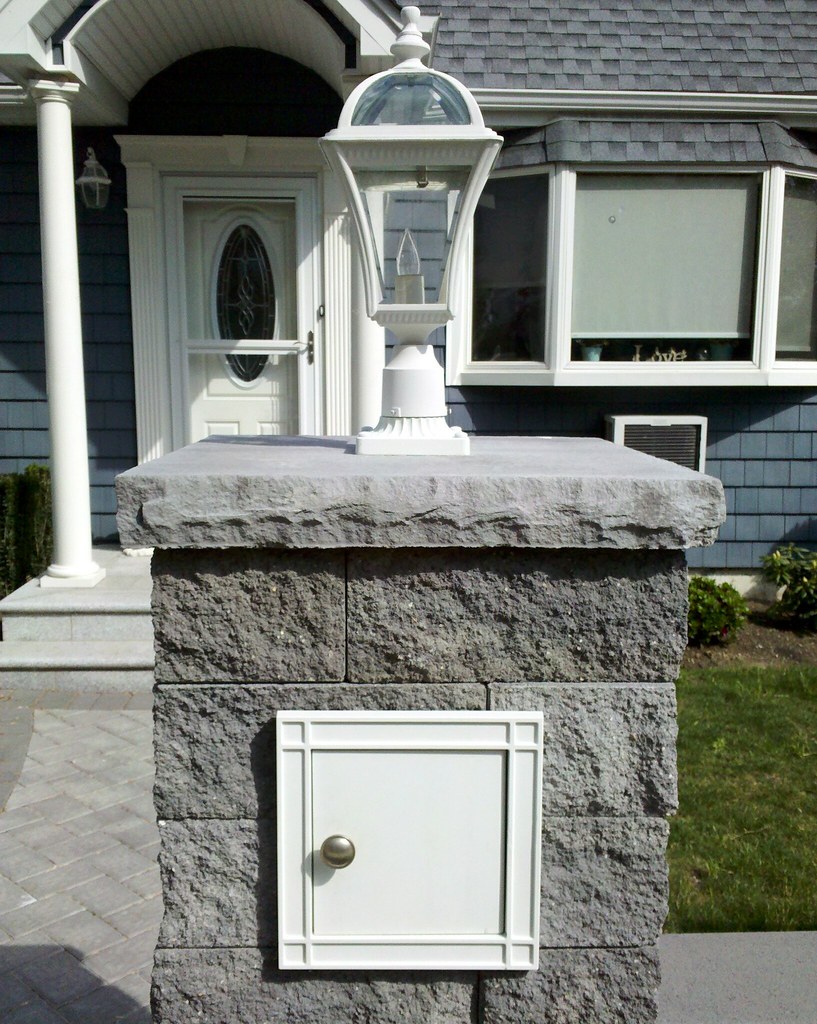 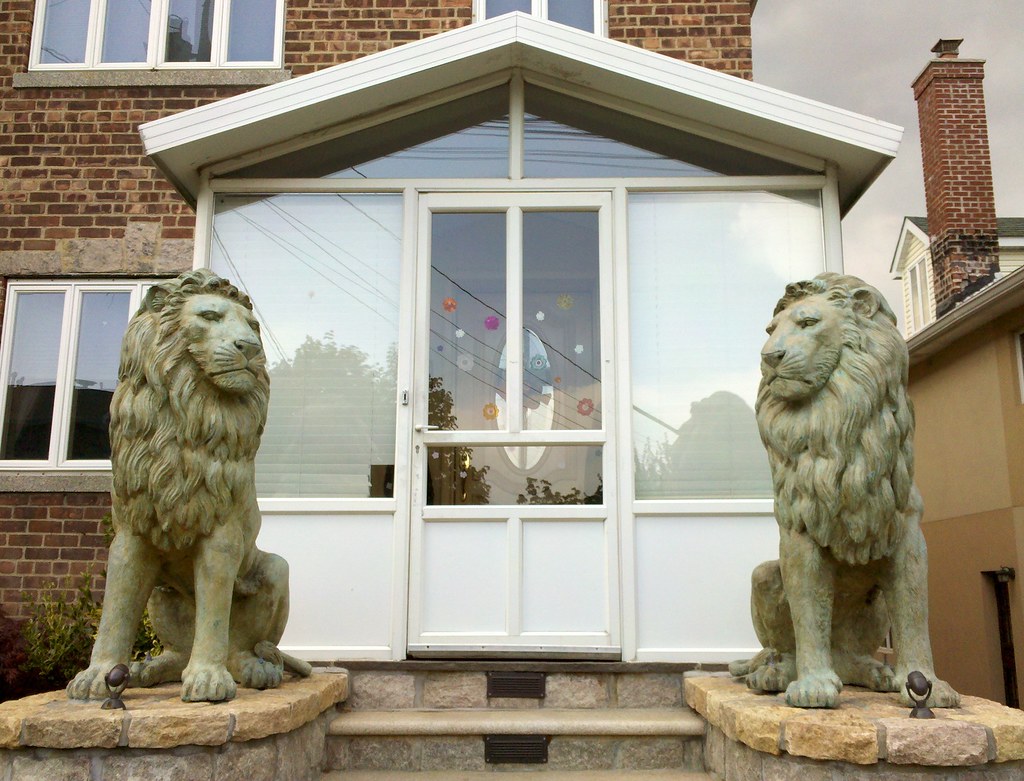 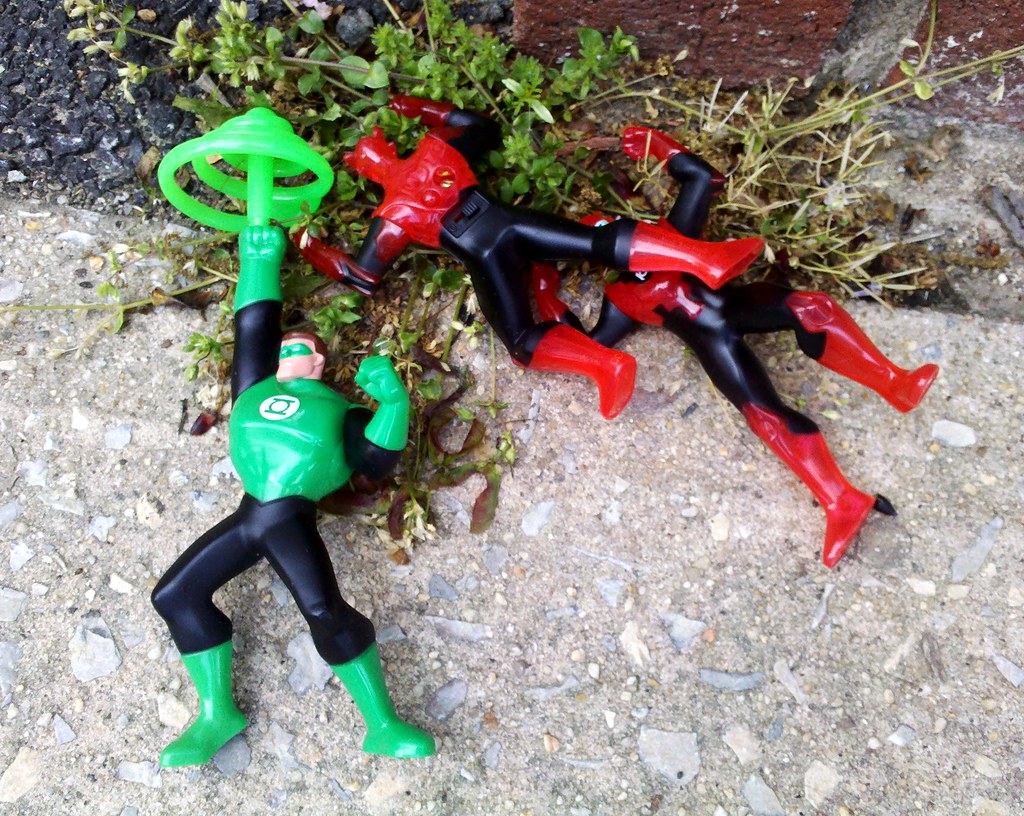 Little by little, we're learning more about this new force of evil on the rise. While the so-called Toyland Slayer (or Toy Slayer, as he was colloquially known) acted as a lone wolf, his successor appears to have control over an army of minions to carry out his every whim. The bodies of these two red demons will provide priceless scientific information in our ongoing War on Terror, but, sadly, their acquisition comes at a dear cost. Rest in peace, Green Lantern. You were one of our greatest allies and a steadfast friend to all toykind. 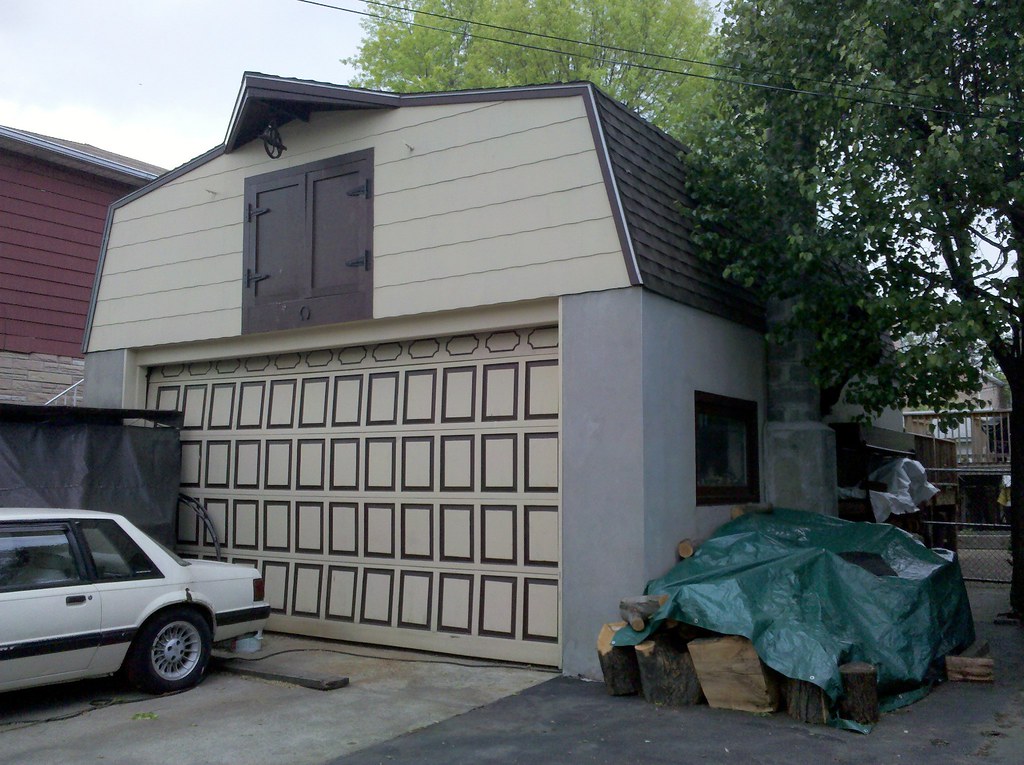 Note the hayloft doors and pulley. 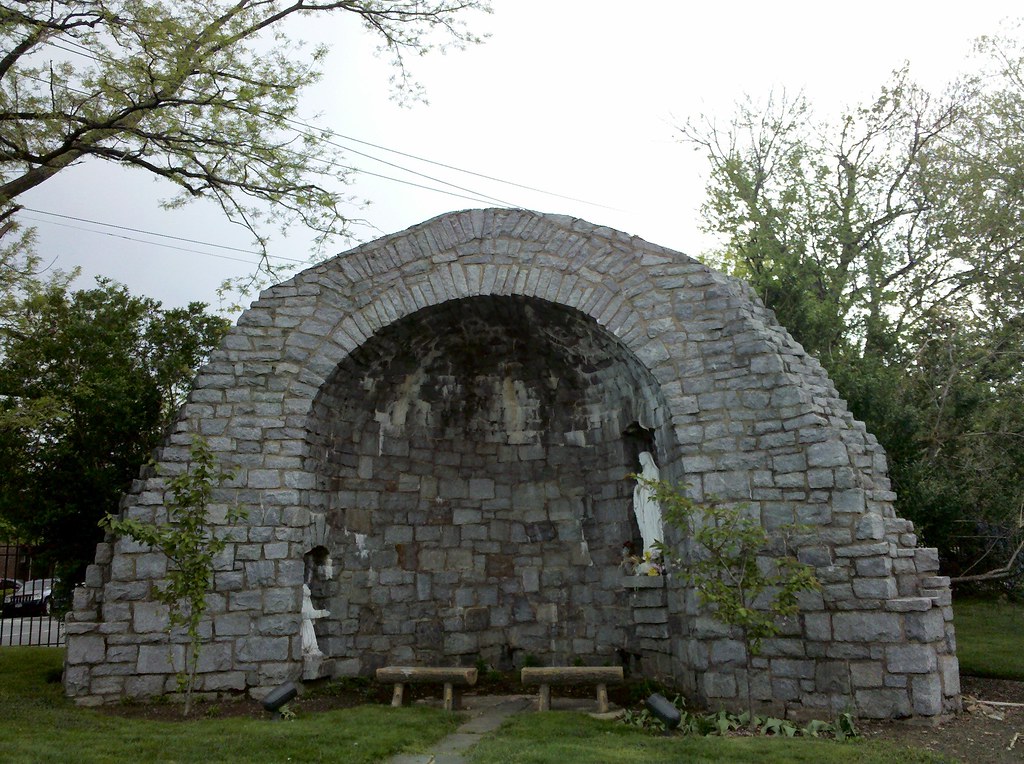 It's located on the campus of Providence Rest, a nursing home run by the Sisters of St. John the Baptist 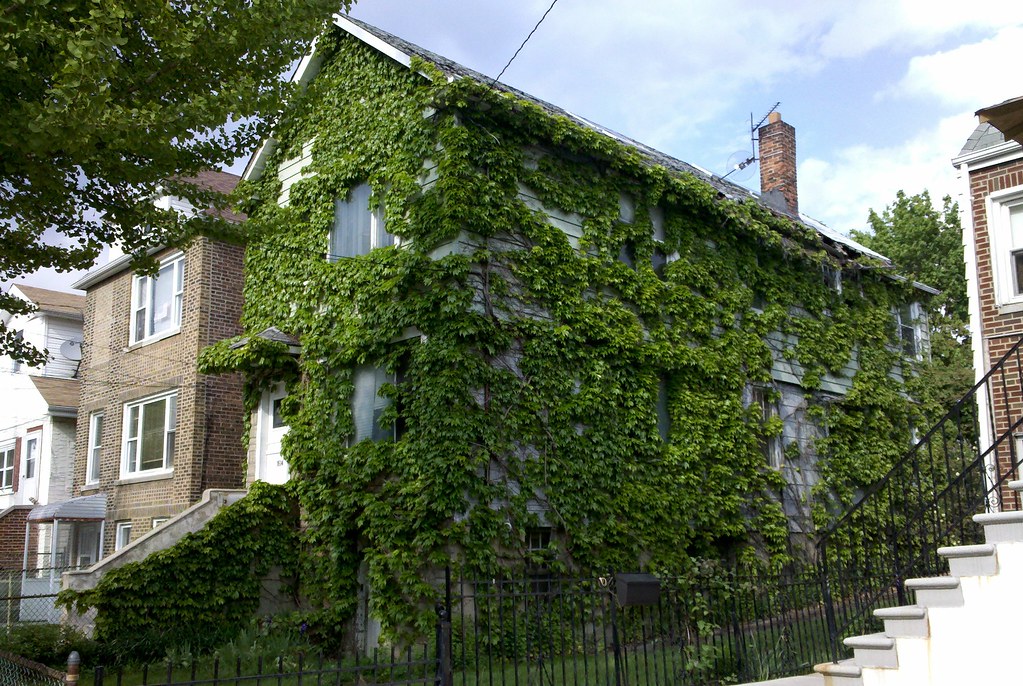 Birdhouse on a birdhouse 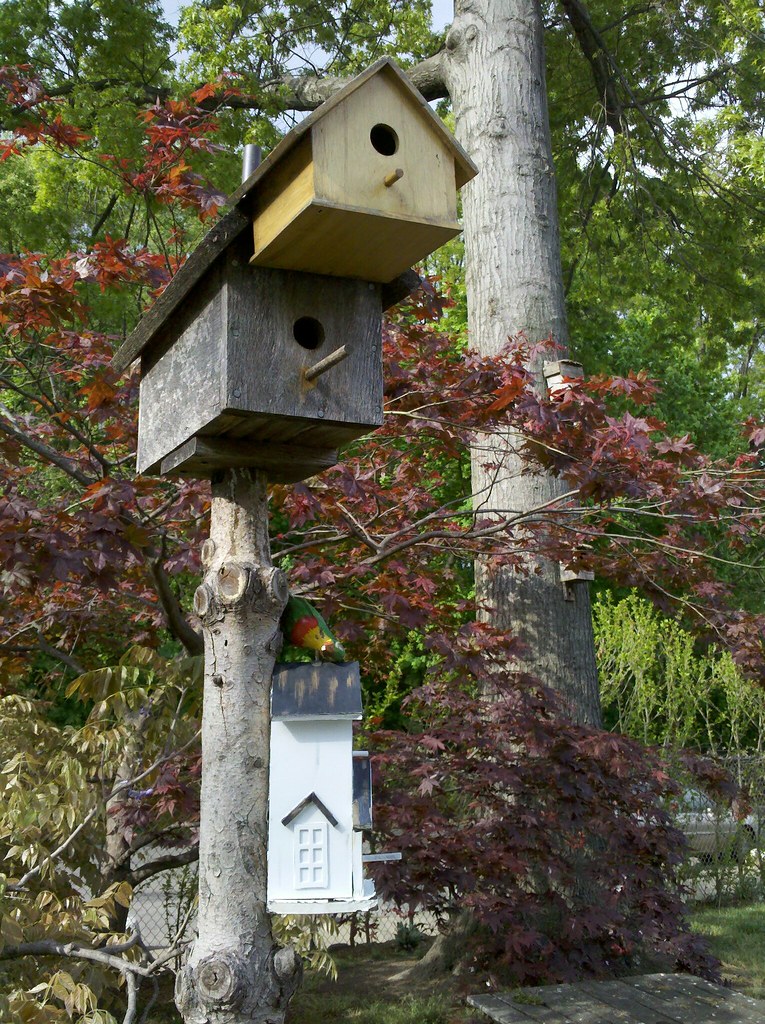 Reminds me of this 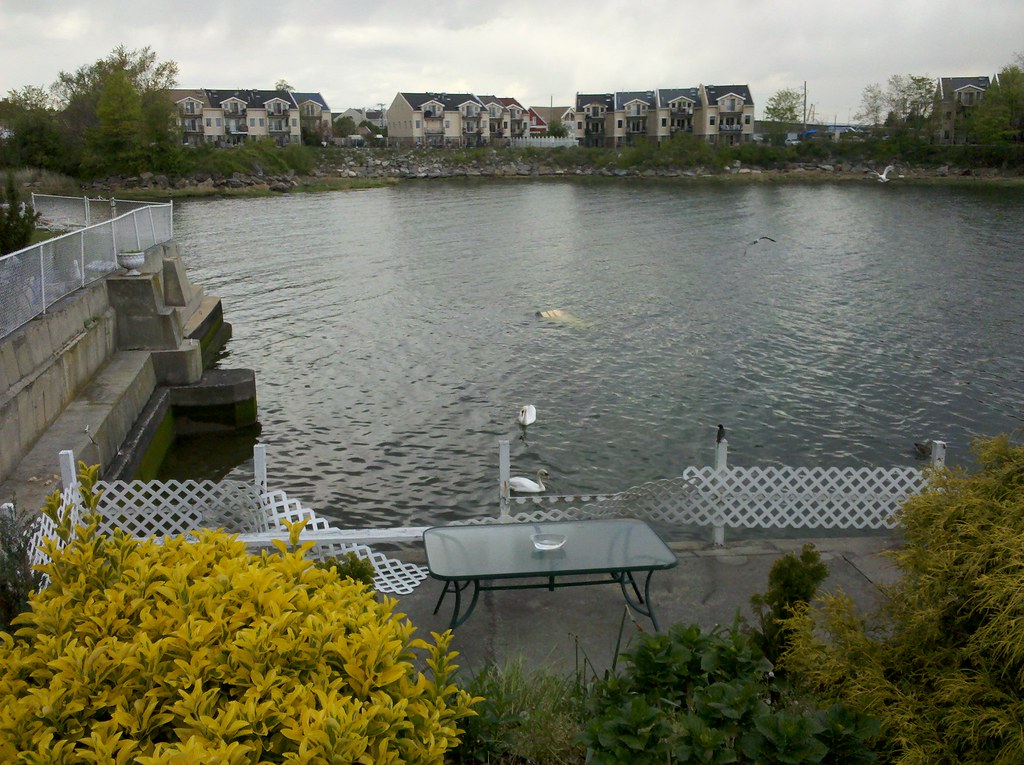 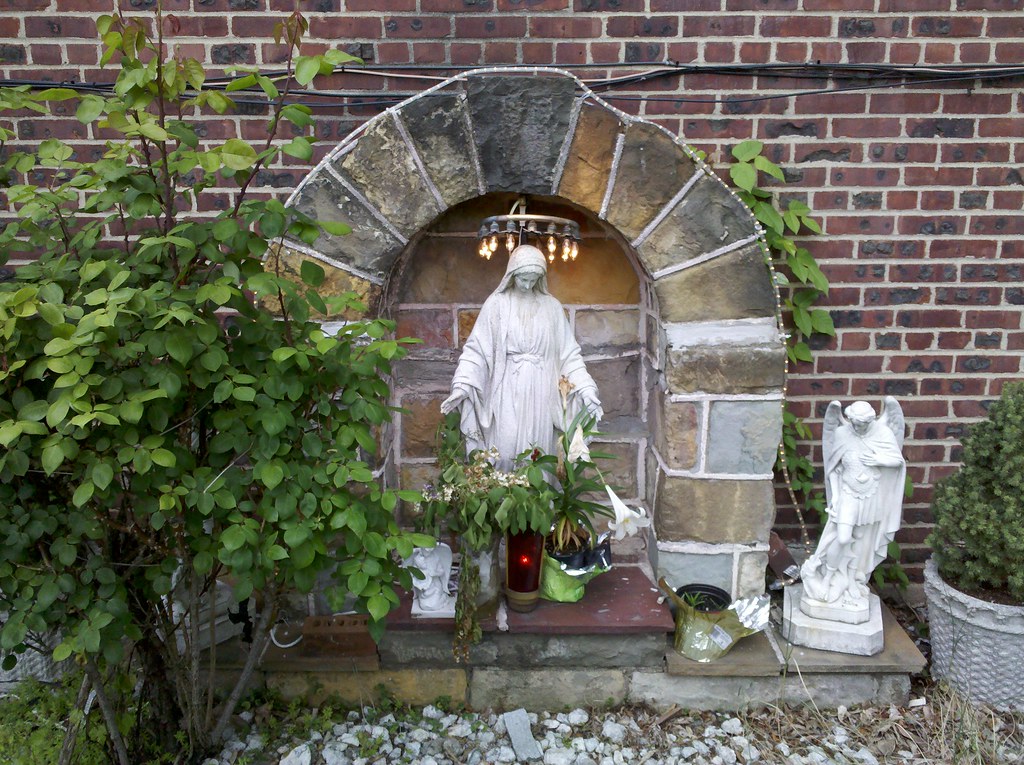 One of several I saw today 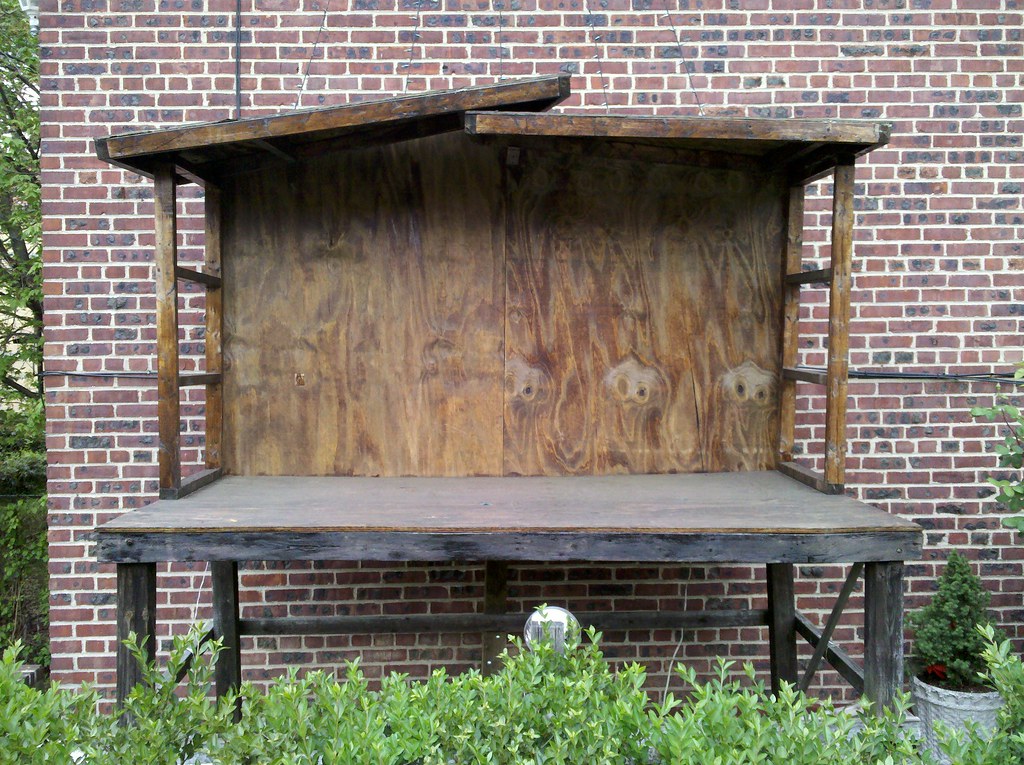 Located next to the shrine from the previous picture 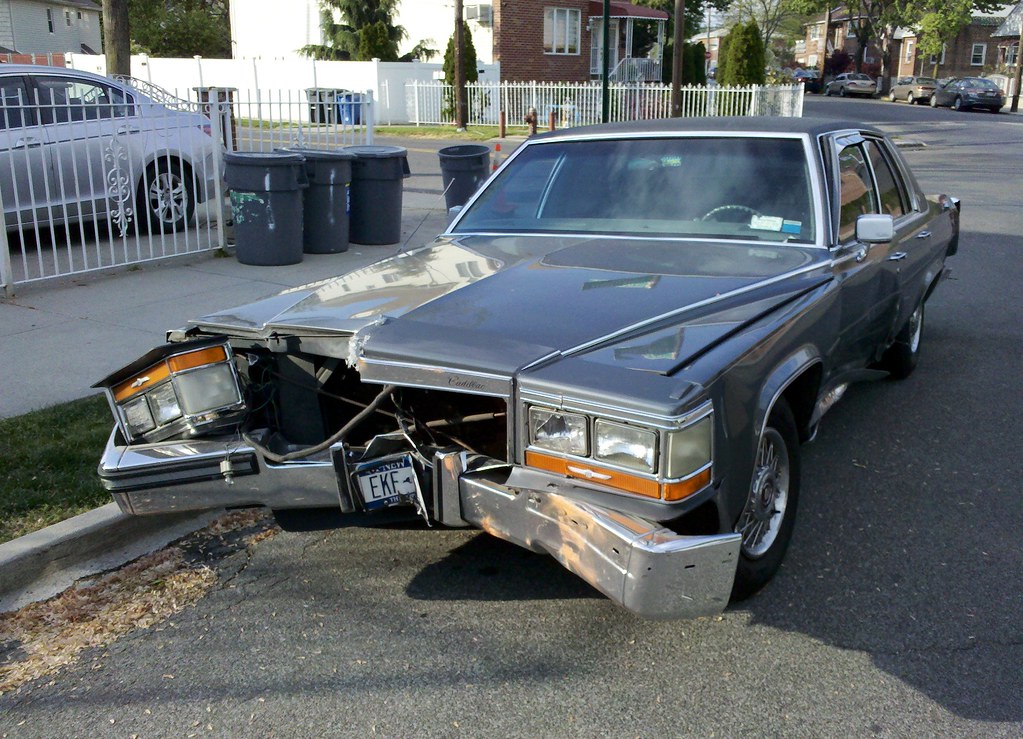 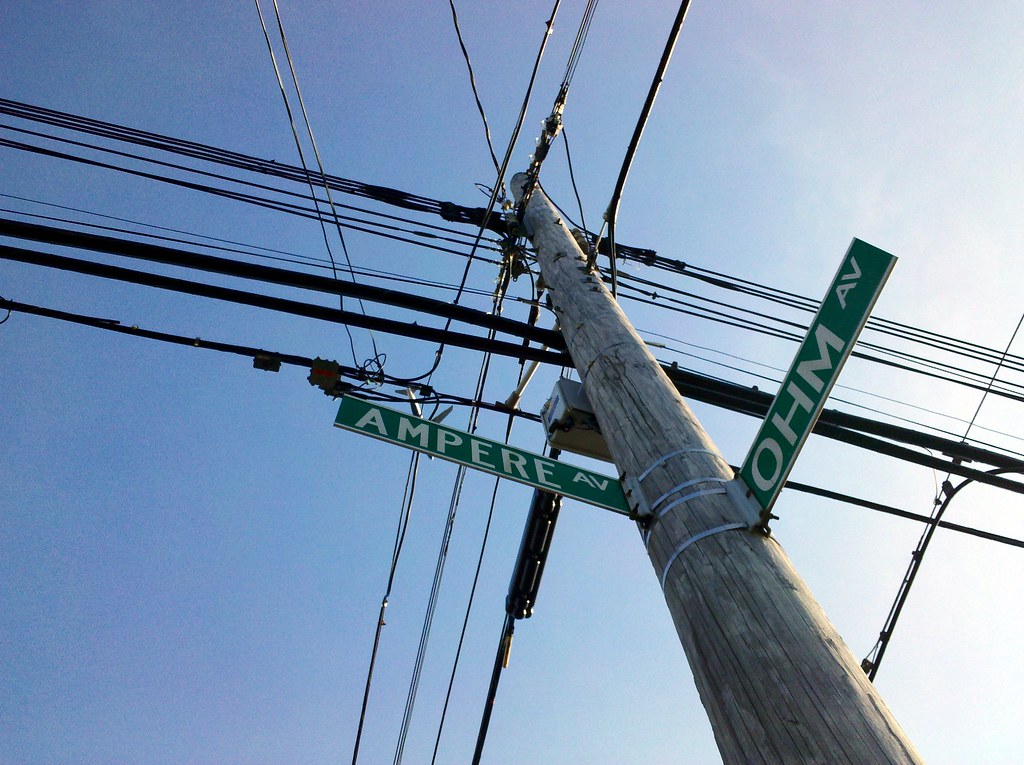 There are several scientific-sounding streets here in Country Club: Ampere, Ohm, Watt, Radio, Research, and Library (but no Volt!). They were likely named in honor of Isaac Rice, former president of the Electric Storage Battery Company, whose wife donated a million dollars to the city in 1919 for the construction of Rice Stadium, a tribute to her late husband, in nearby Pelham Bay Park.

Isaac Rice was also a chess master, a music scholar (one of his published works is titled "How the Geometrical Lines Have Their Counterparts in Music"), and, like Robert Fulton 100 years earlier, a pioneer in the field of submersibles. In 1899 he founded the Electric Boat Company, which built the US Navy's first submarine and which has been its primary supplier of such vessels ever since.

His wife, Julia, was a physician and a pioneer in her own right: she founded the Society for the Suppression of Unnecessary Noise, which fought against loud tugboats and boisterous schoolchildren, and was notably supported by Mark Twain. An all-too-common form of discrimination in the East Bronx

Seaplane base in the Bronx! 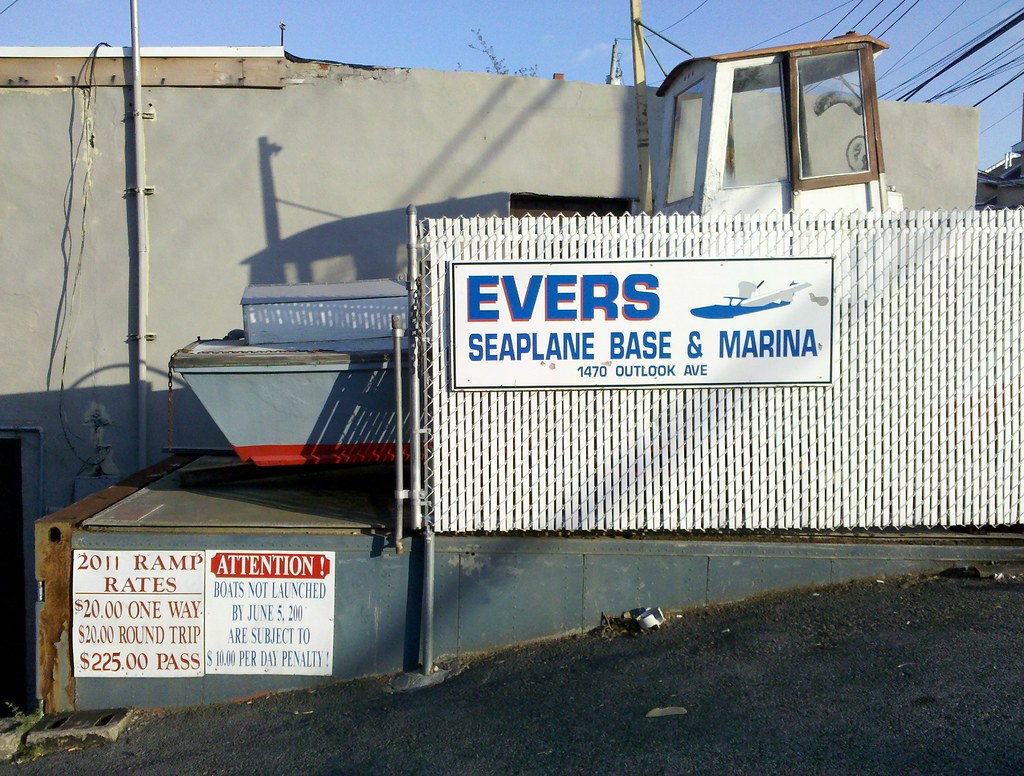 I can't find much information about this place.

You may also want to take note of the boat behind the sign. It has a face drawn on the front of it — you can see its left eye and eyebrow. 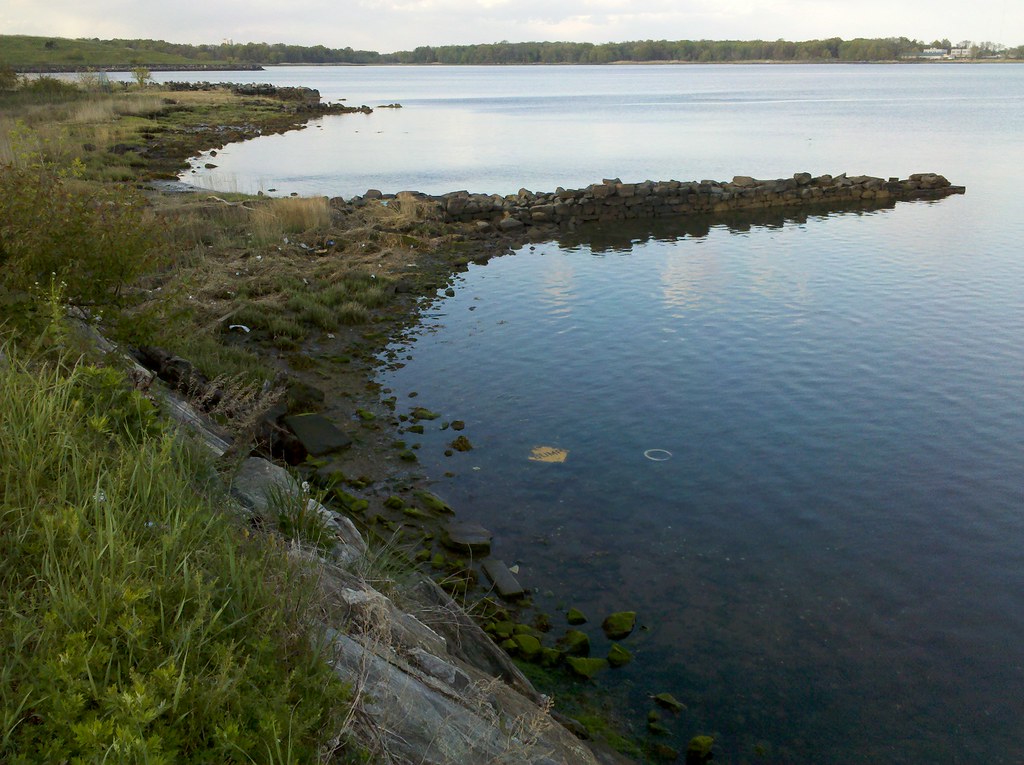 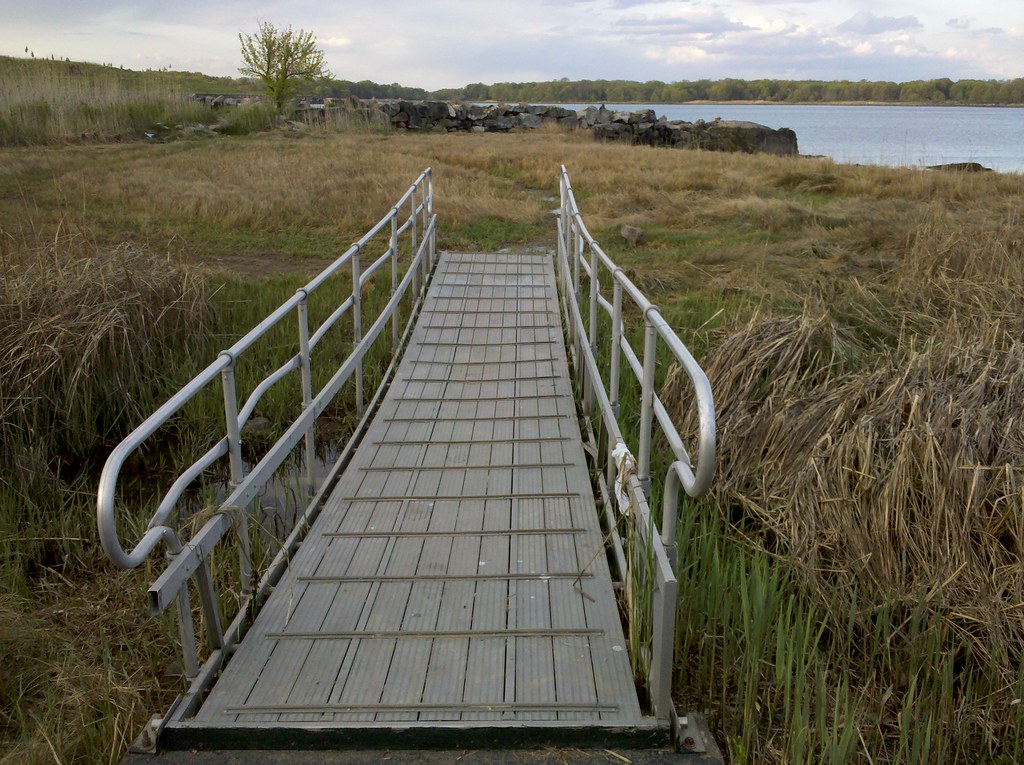 We've just entered the southern portion of Pelham Bay Park, the largest park in the city. (It's more than three times the size of Central Park.)

And there go the fishermen 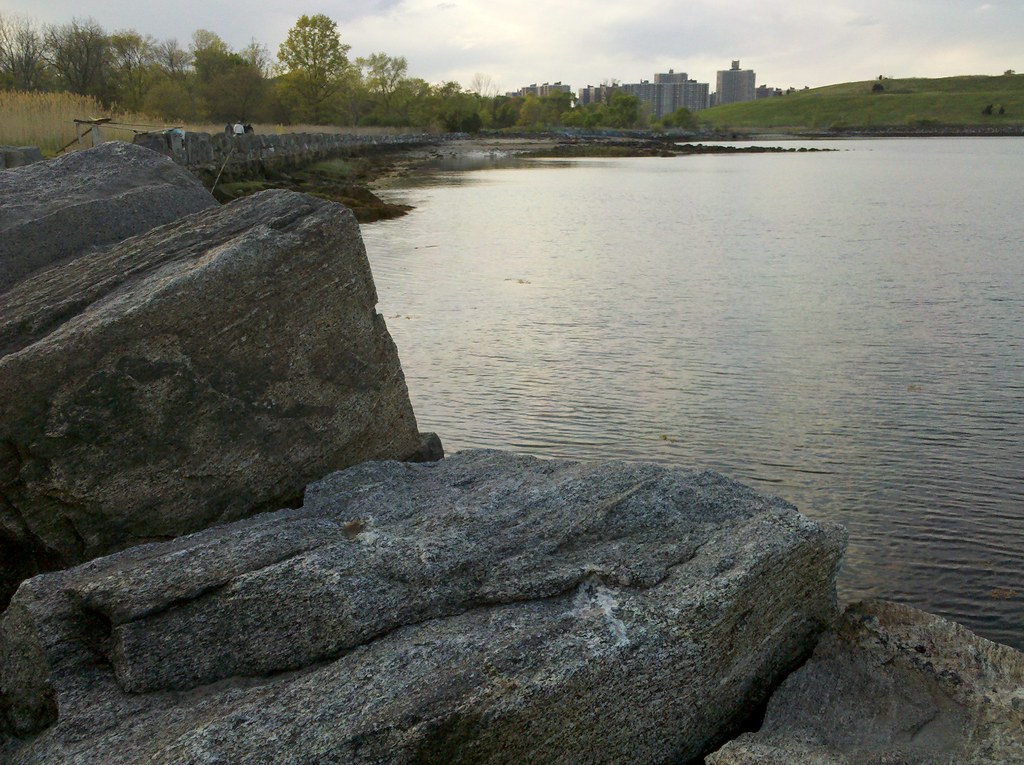 You can see them walking beside the rock wall to the left. Off in the distance is our loyal visual companion, Co-op City. 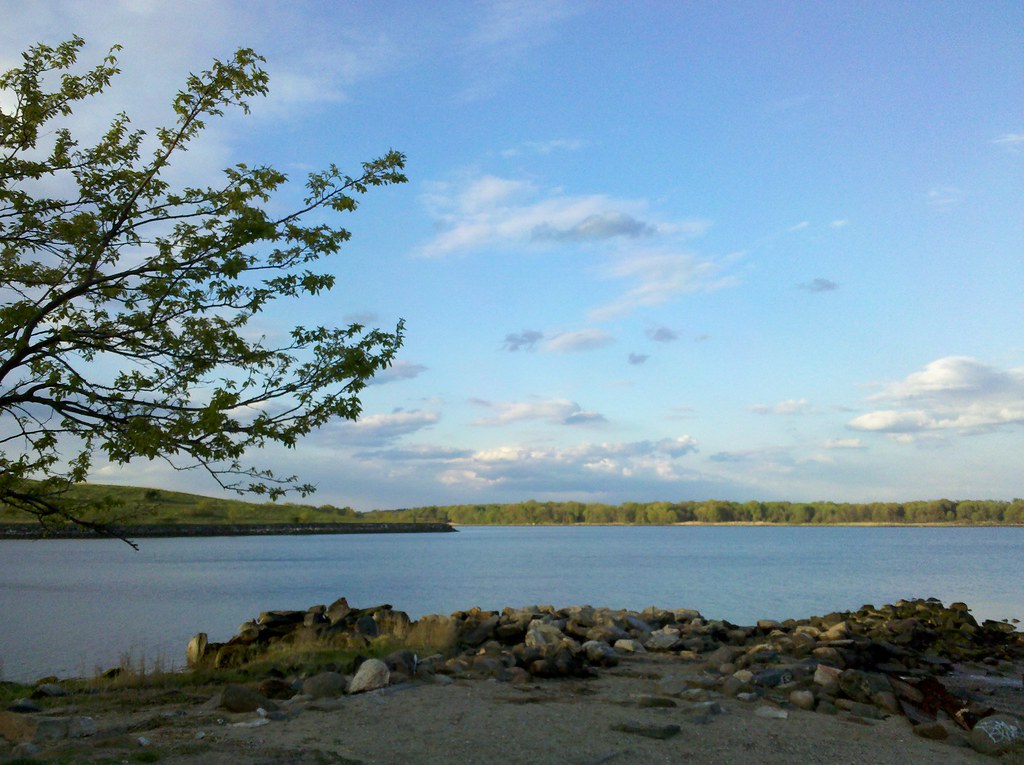 Day 1268: Lilies beneath a sprinkly sky