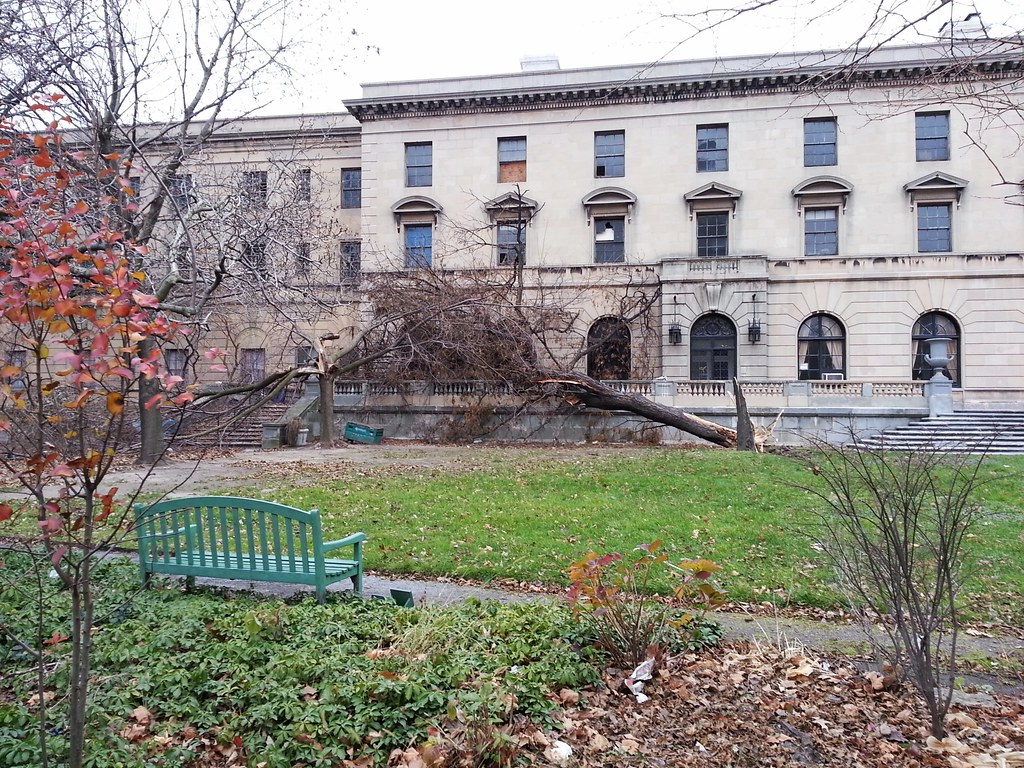 It seems that one of the thousands of trees felled by Hurricane Sandy has landed, and remained for over a month, on the porch of the Andrew Freedman Home. One of the city's more unusual institutions, the Home was built as a wealthy man's poorhouse — a refined retirement refuge for those of high standing who had lost their riches late in life. (The Graham Home for Old Ladies, which I passed by back in the summer, was founded on similar principles.) Mr. Freedman's motivation in creating this institution was elucidated in the Evening Tribune in 1924, the year the Home opened:

To have luxury all one's life and then in old age to face nothing but sordid penury; contempt where once was deference; ugly surroundings where once was beauty; rough shoulderings from coarse illiterates where once was protection and a circle of charming friends — this, indeed, is to be cast from heaven to the uttermost pit. Only those who have been reared in refinement can appreciate the unmitigated squalor of exile among the unintelligent.

The article goes on to explain how society's safety net fails to protect the upper class:

The very poor have their free clinics, their free institutions for the aged. The impoverished middle class has also its quota of inexpensive hospital care and refuge. But who gives a thought to the bankrupt millionaire? Where is the place which will offer him congenial company and congenial surroundings when nothing remains from the days of his wealth except a taste for beauty?

Equipped with "telephones, radio, phonograph, soft-voiced servants, tiled private baths, billiard rooms, card rooms, a library, and a livingroom so luxurious that even a modern millionaire could find no lack in it", the Home was "run like a first-class hotel" for many years, until, along with much of the South Bronx, it fell on hard financial times in the '60s and '70s. It was finally sold in 1982 and has since served as, among other things, a non-snobby old-age home for the regular poor, a day-care center, an event space, a home for community organizations, and an exhibition hall for site-specific artworks. As of this past spring, there has even been a ten-room bed-and-breakfast operating in the building, part of a program to provide training for local residents seeking careers in the hospitality industry.