That plaque on the wall 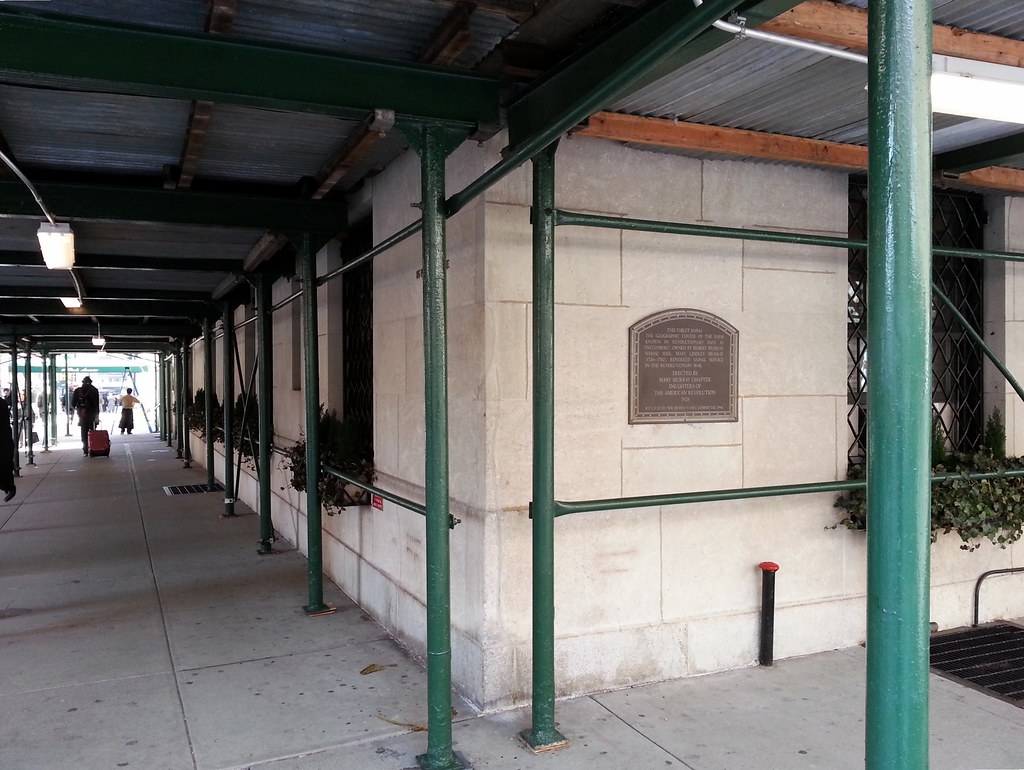 This tablet marks the geographic center of the farm known in Revolutionary days as "Inclenberg", owned by Robert Murray whose wife, Mary Lindley Murray (1726-1782), rendered signal service in the Revolutionary War.

Erected by Mary Murray Chapter
Daughters of the American Revolution
1926

Speaking of Mary Murray, here's a story recalled by James Thacher, a surgeon in the Revolutionary War:

When retreating from New York, Major General Putnam, at the head of three thousand five hundred continental troops, was in the rear and the last that left the city. In order to avoid any of the enemy that might be advancing in the direct road to the city, he made choice of a road parallel with and contiguous to the North River, till he could arrive at a certain angle, whence another road would conduct him in such a direction as that he might form a junction with our army. It so happened that a body of about eight thousand British and Hessians were at the same moment advancing on the road, which would have brought them in immediate contact with General Putnam, before he could have reached the turn into the other road. Most fortunately, the British generals, seeing no prospect of engaging our troops, halted their own, and repairing to the house of a Mr. Robert Murray, a quaker and friend of our cause; Mrs. Murray treated them with cake and wine, and they were induced to tarry two hours or more, Governor Tryon frequently joking her about her American friends. By this happy incident General Putnam, by continuing his march, escaped a rencounter with a greatly superior force, which must have proved fatal to his whole party. One half hour, it is said, would have been sufficient for the enemy to have secured the road at the turn, and entirely cut off General Putnam's retreat. It has since become almost a common saying among our officers, that Mrs. Murray saved this part of the American army.