Crossing the line, one last time 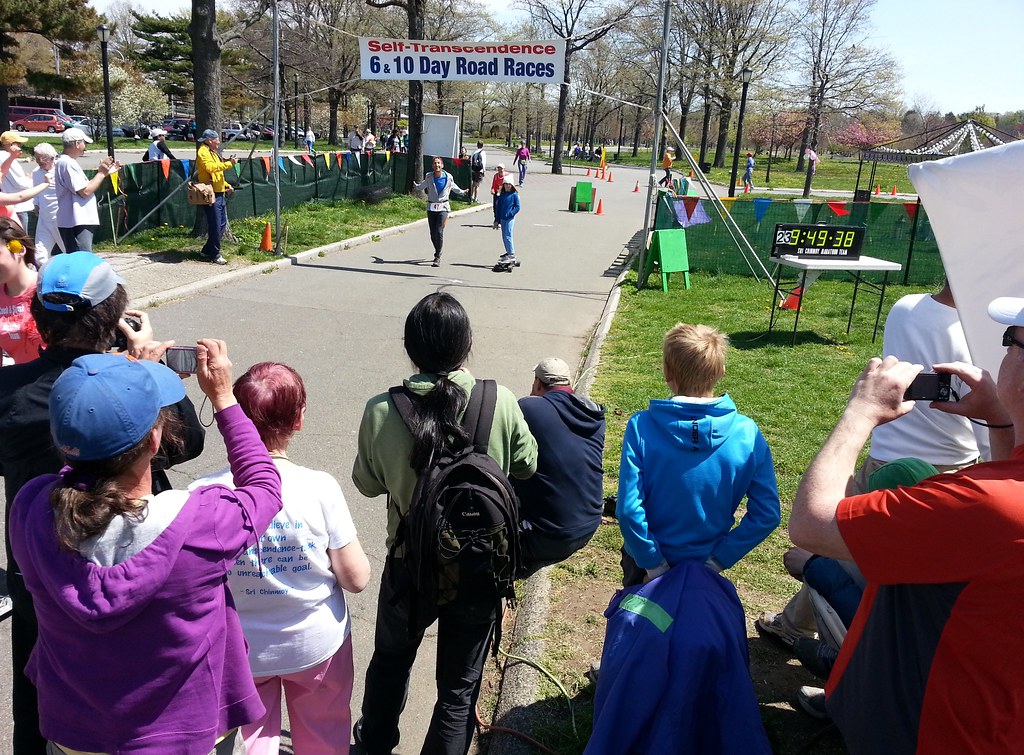 Accompanied by his skateboard-riding daughter here in Flushing Meadows, Dharbhasana completes his 327th, and final, lap of the 1-mile loop that he's been running around for the past six days. That comes out to 54.5 miles — more than two marathons — per day, and it's good for 11th place among the male competitors in this year's Self-Transcendence 6 Day Race. The top finisher ran 462 miles (77 per day), while his first-place counterpart in the 10-day contest covered 720 miles (72 per day). You can see all the results, and read more about the races, here. (If you remember my visits to the mind-boggling 3100-mile race last summer, you will probably not be surprised to learn that the 6- and 10-day competitions are also put on by the Sri Chinmoy Marathon Team.) 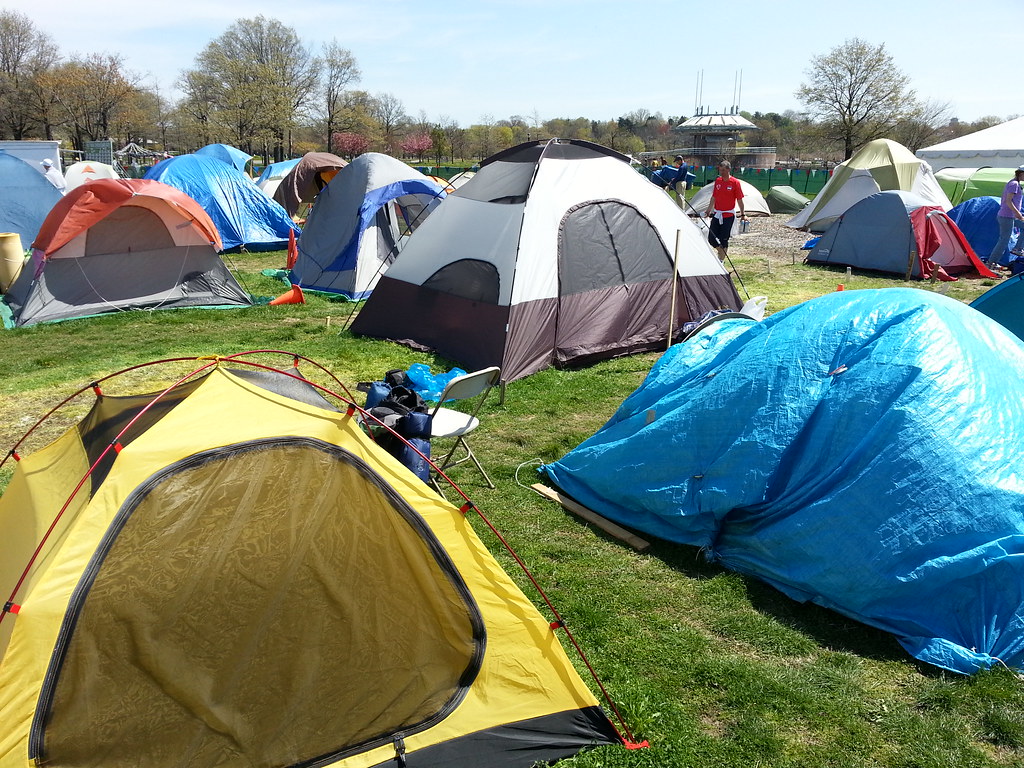 Located just off to the side of the racecourse, this is where the runners hunker down for a few hours of sleep each night. 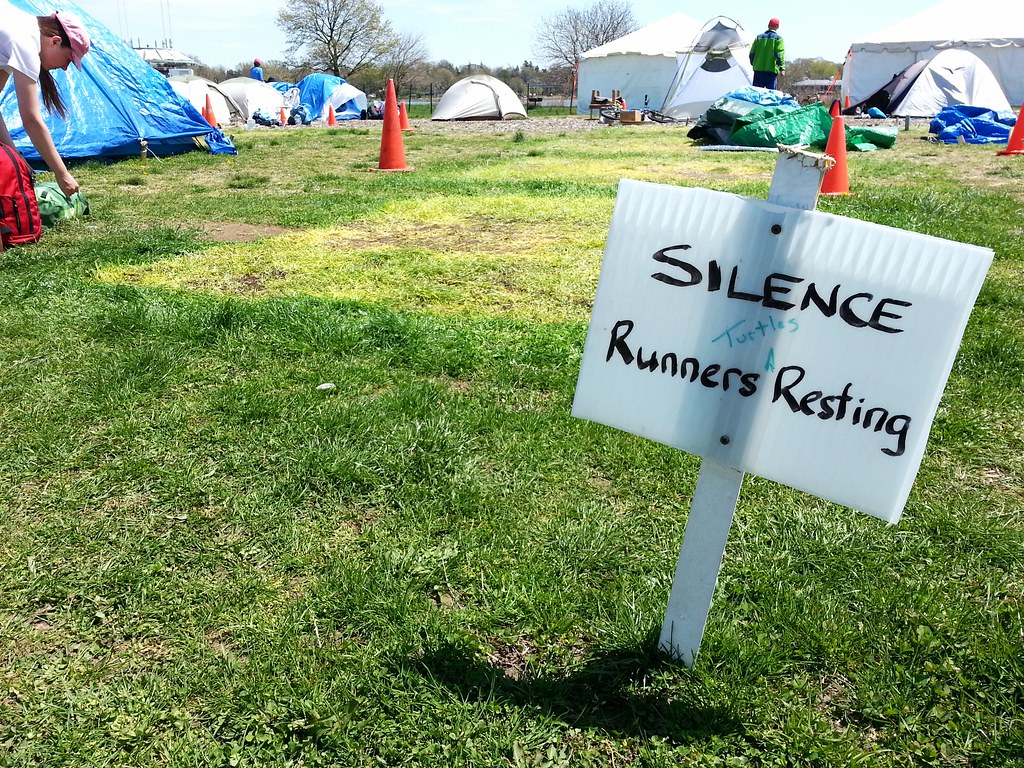 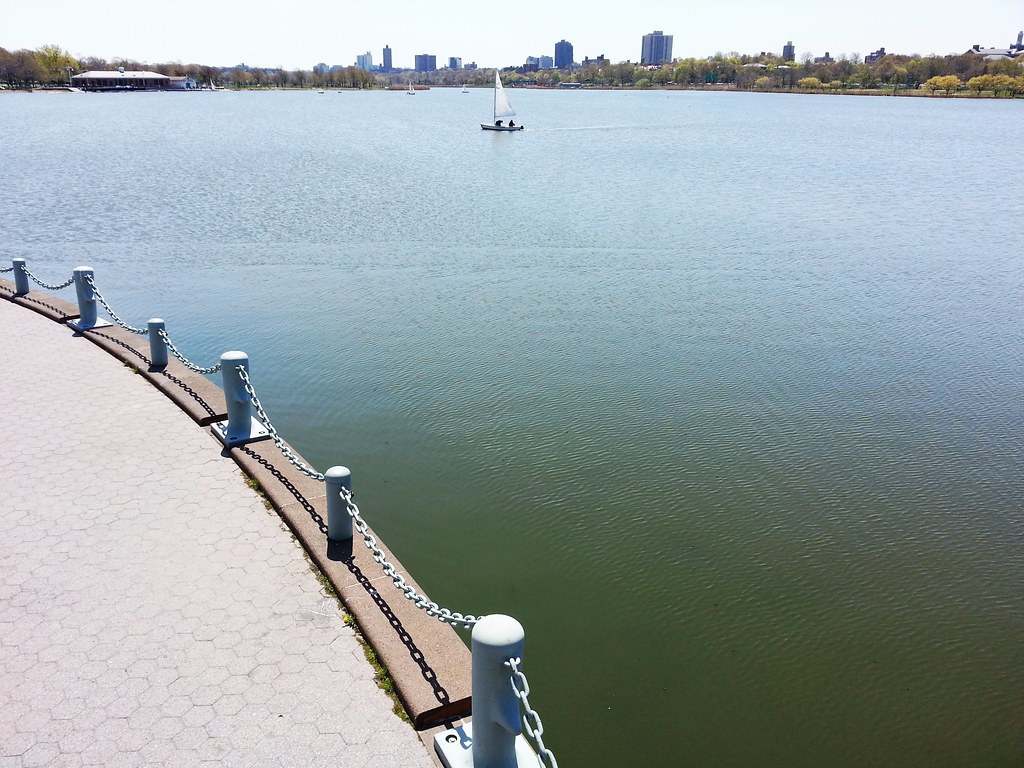 Created for the 1939-40 World's Fair, this is the largest lake in New York City (not counting the Jerome Park and Central Park Reservoirs). 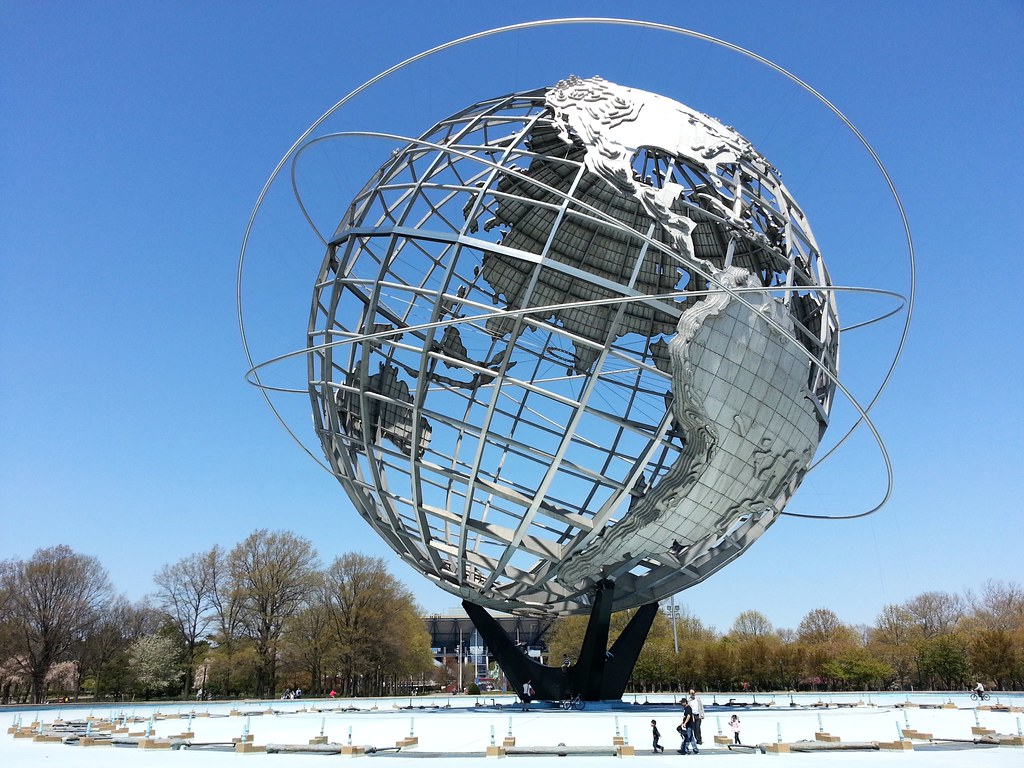 Centerpiece of the 1964-65 World's Fair at Flushing Meadows 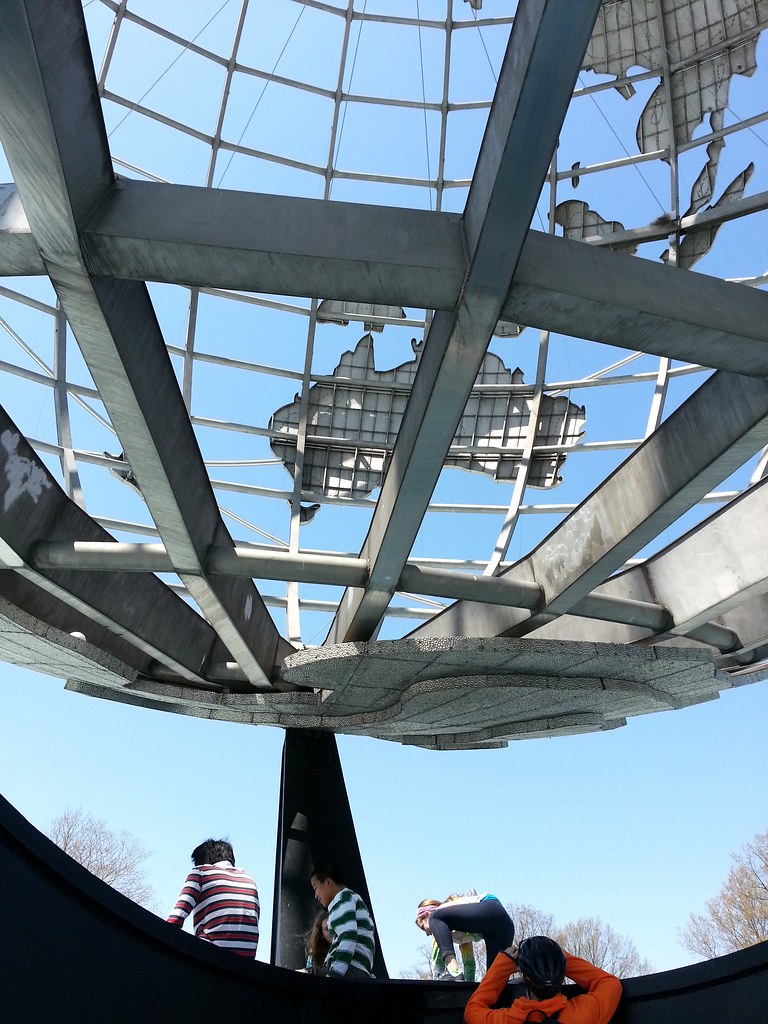 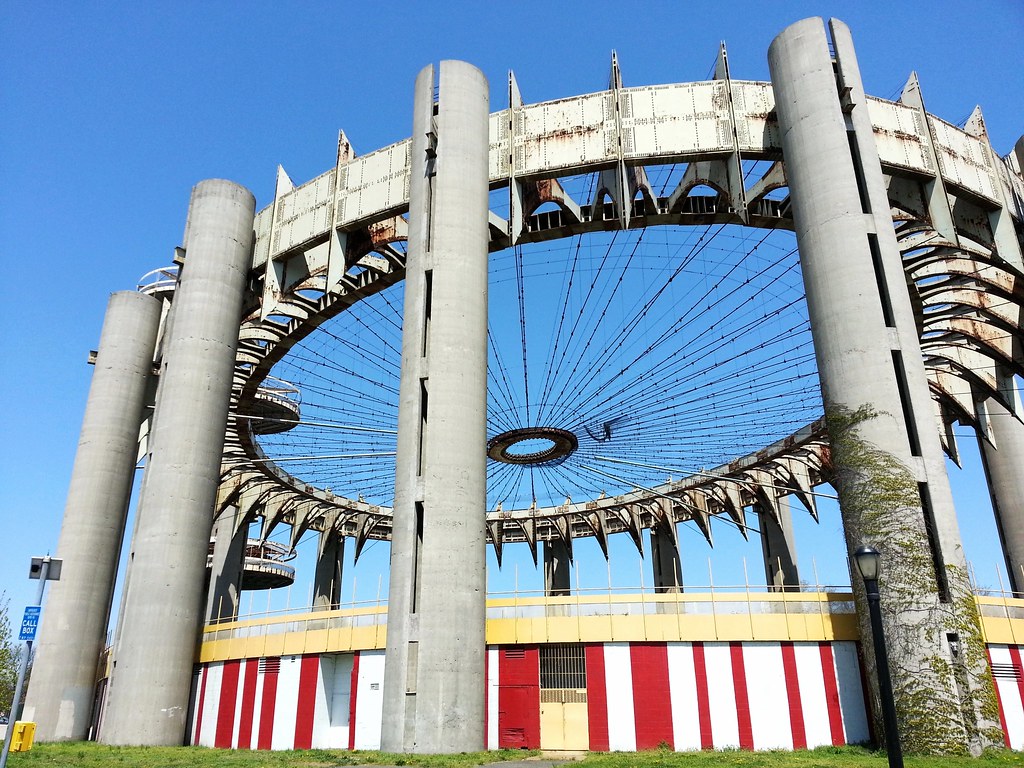 This abandoned structure, originally covered by an enormous, multi-colored, translucent suspended roof, was part of the New York State Pavilion at the 1964-65 World's Fair. Inside, sprawling across the floor, is a 130-by-166-foot terrazzo road map of New York State, heavily deteriorated after decades of neglect. It's currently hidden from view, however; in 2009, it was covered by protective layers of sand, geotextiles, and gravel in an attempt to preserve what's left of it. You can see a photo of the map in all its World's Fair glory here, and you can also spot it on several occasions in the circa-1987 music video for "Don't Let's Start" by They Might Be Giants, which was mostly filmed inside the Tent.

Flushing Meadows Park was the site of not only the 1964-65 World's Fair, but also its 1939-40 predecessor. Before that, however, the park wasn't a park at all, but rather a vast ash dump run by a Tammany crony named Fishhooks McCarthy. This befouled landscape was immortalized in the pages of The Great Gatsby:

About half way between West Egg and New York the motor road hastily joins the railroad and runs beside it for a quarter of a mile, so as to shrink away from a certain desolate area of land. This is a valley of ashes — a fantastic farm where ashes grow like wheat into ridges and hills and grotesque gardens, where ashes take the forms of houses and chimneys and rising smoke and finally, with a transcendent effort, of men who move dimly and already crumbling through the powdery air. Occasionally, a line of gray cars crawls along an invisible track, gives out a ghastly creak, and comes to rest, and immediately the ash-gray men swarm up with leaden spades and stir up an impenetrable cloud, which screens their obscure operations from your sight.

Realizing that a tremendous amount of money would be required to convert the old dump into parkland, Robert Moses seized on the idea of holding a World's Fair here in 1939, using the financial resources available for the fair to level the ash mounds, dig out lakes, and lay down topsoil, turning what Moses described as "a cloud of smoke by day and a pillar of fire by night" into one of the largest parks in New York City.

Painting the Tent of Tomorrow 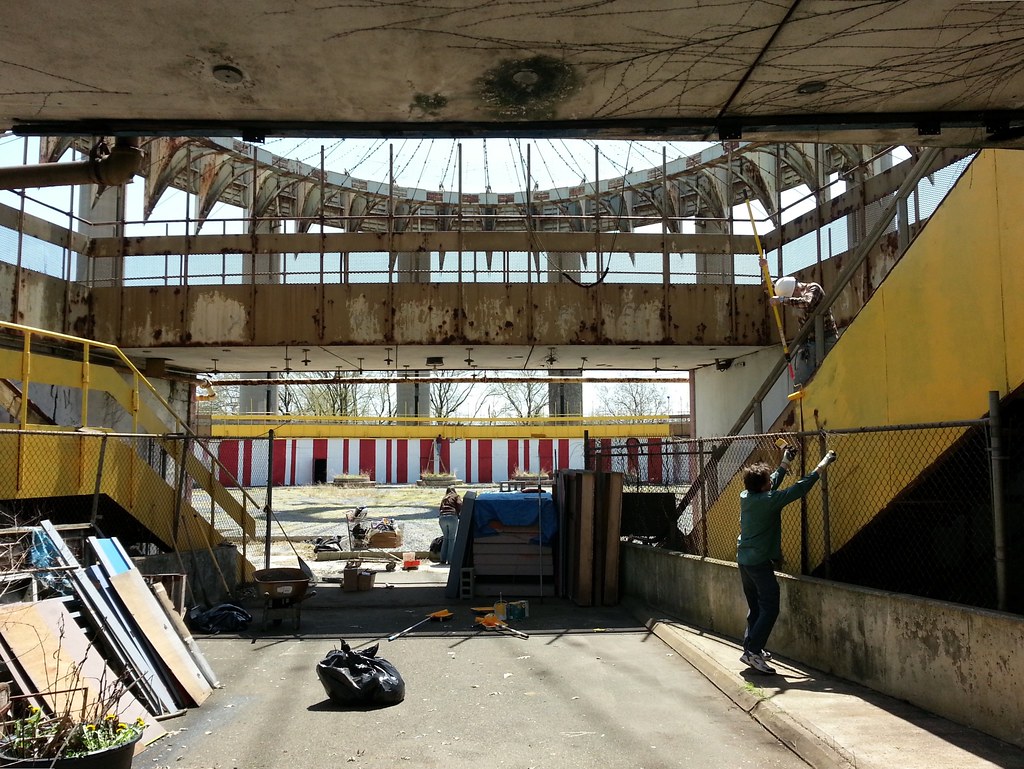 Unfortunately, this doesn't mean they're preparing to reopen the place to the public. The guy standing on the old escalator said they're just trying to pretty up the areas visible from the adjacent Queens Theatre. 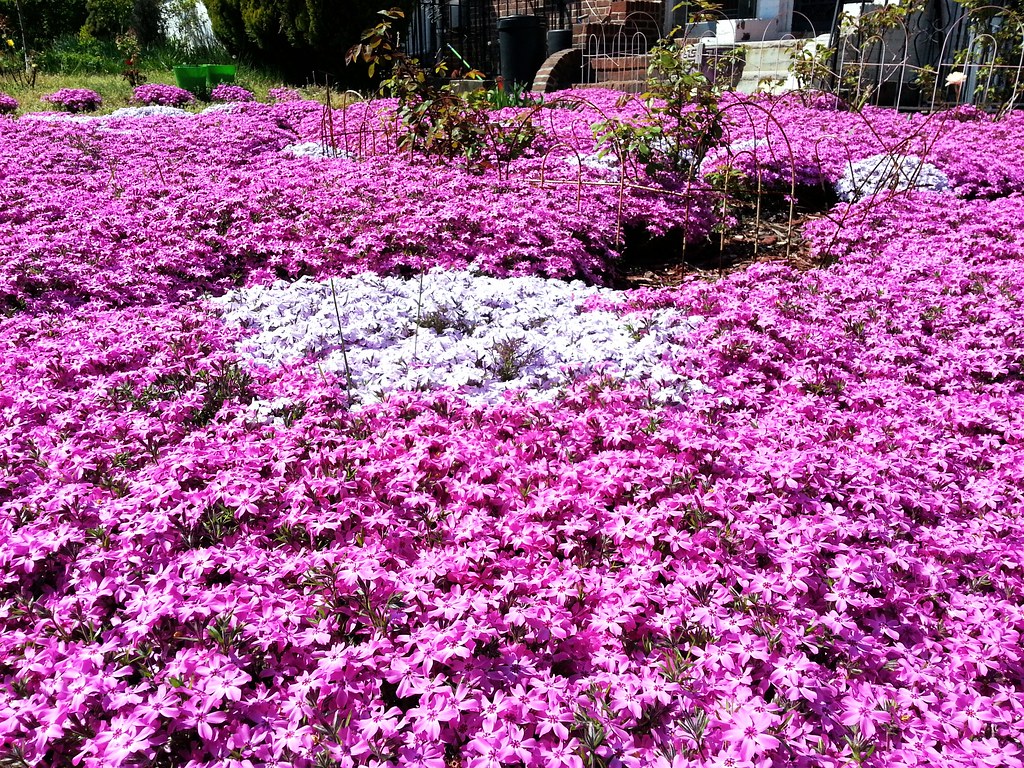 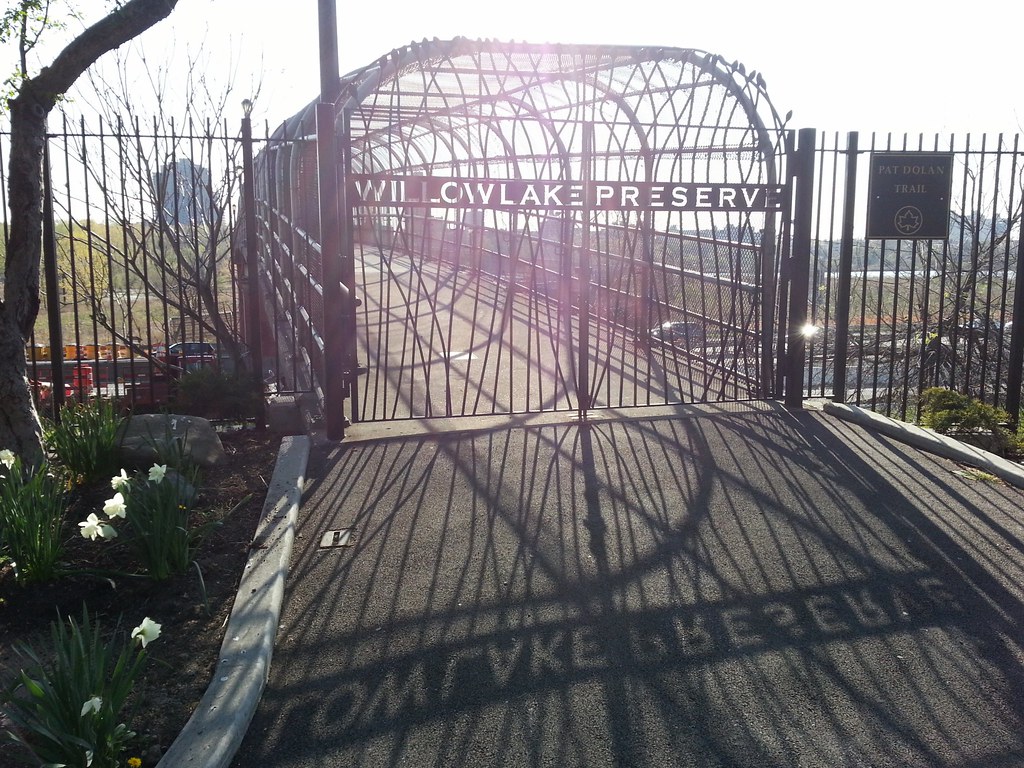 An awfully expensive way to keep people out of the park

Beneath the Van Wyck Expressway 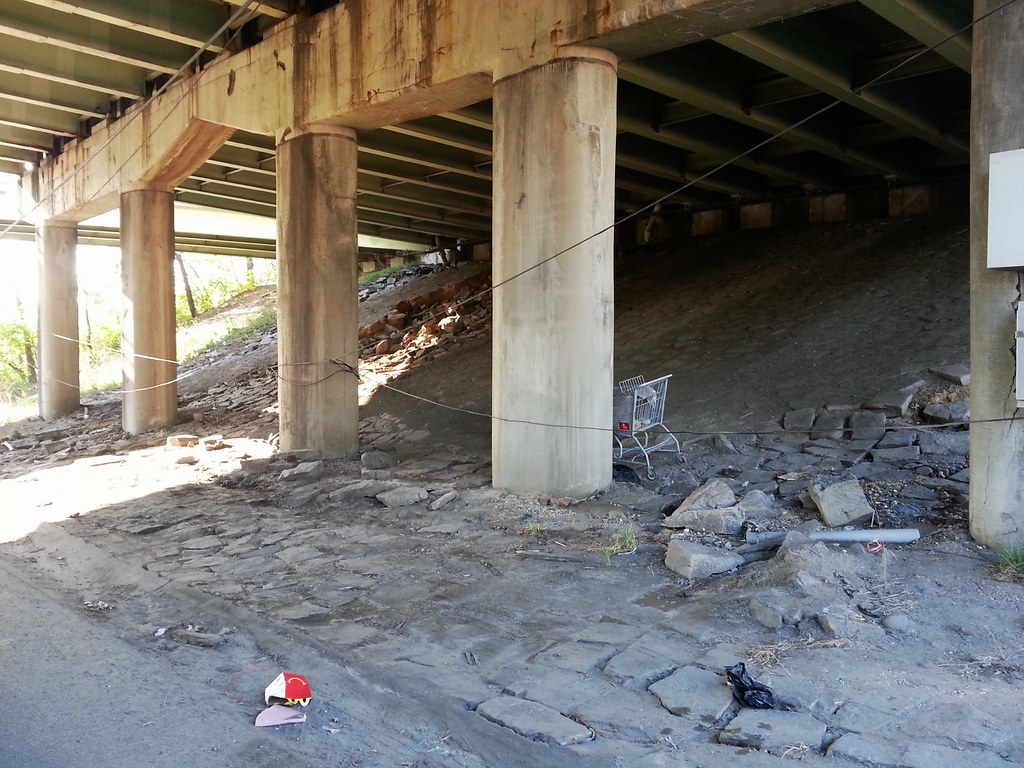 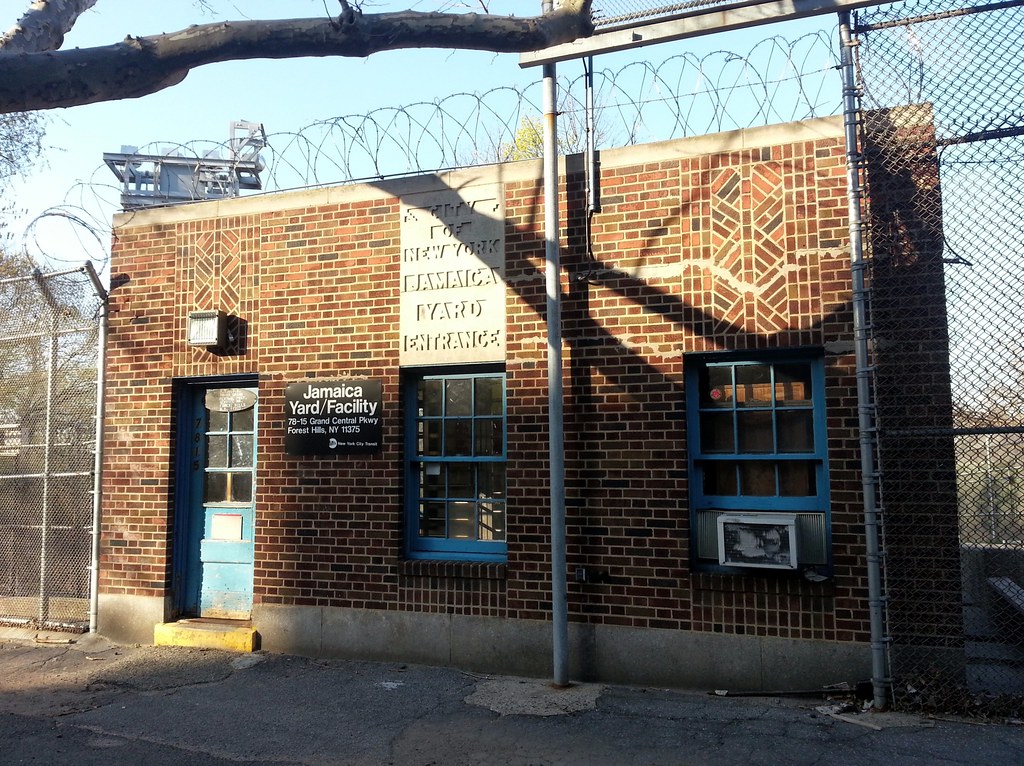 to the Jamaica Yard 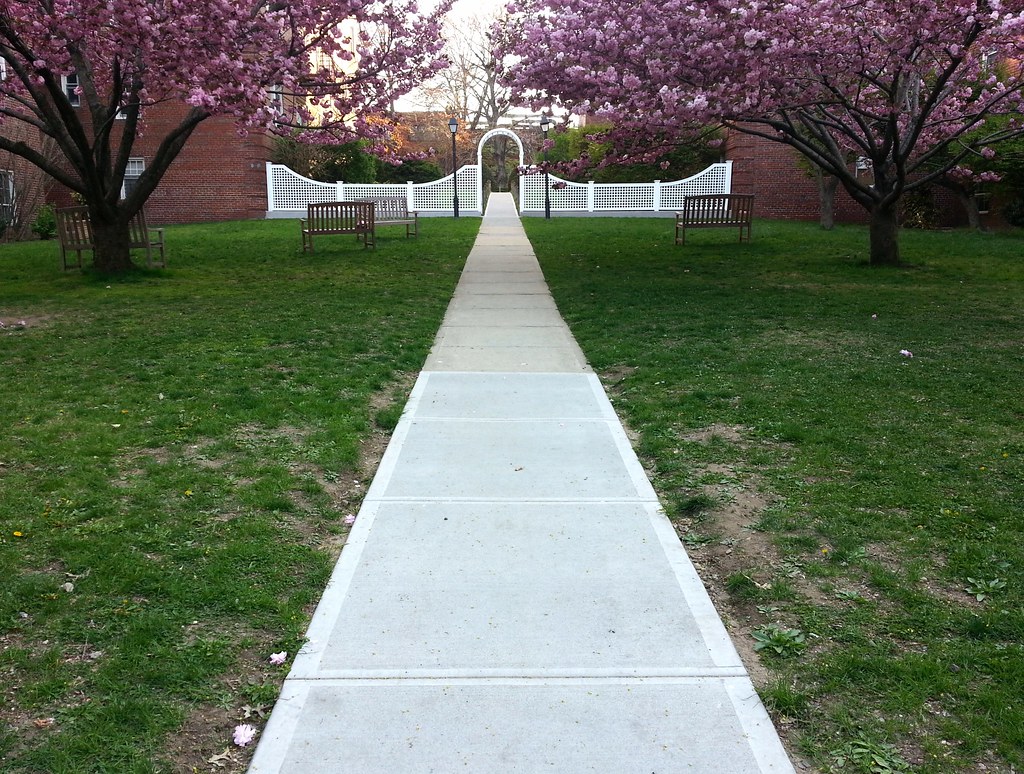 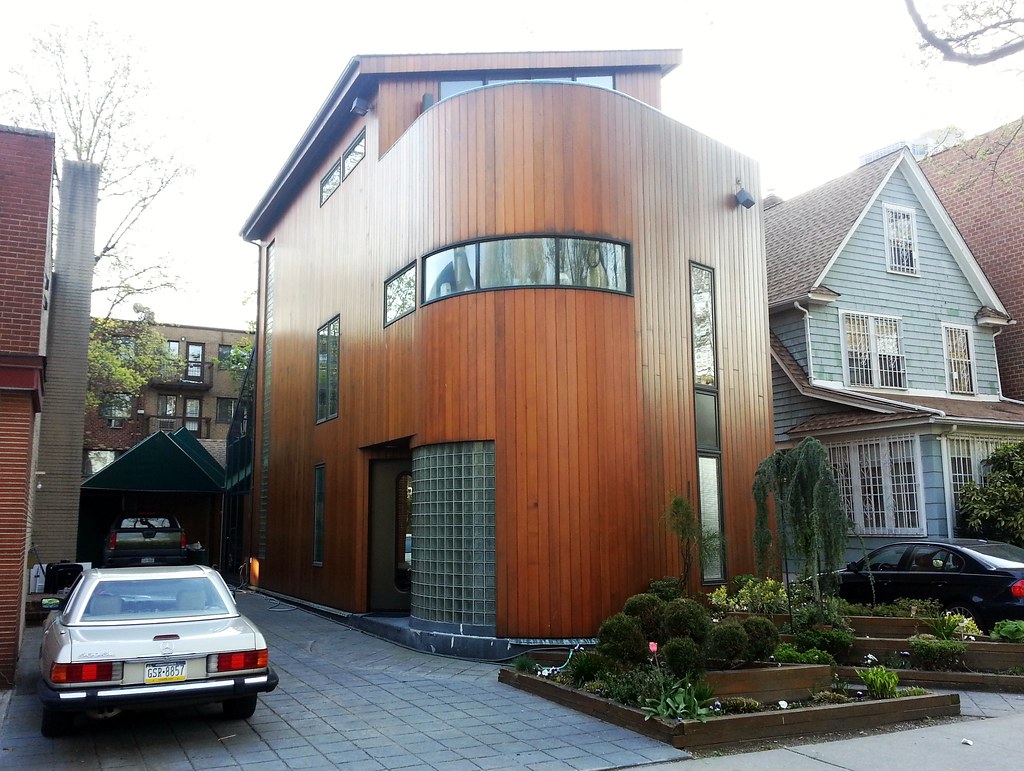 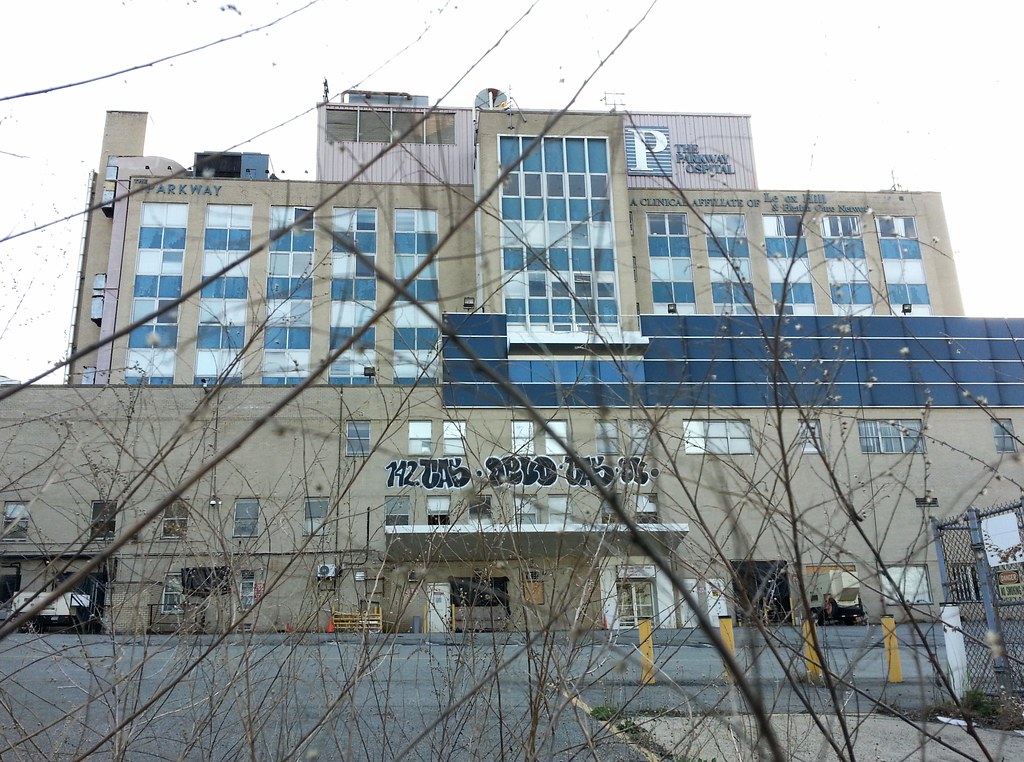 Closed since 2008 — not even a nice fat bribe could keep it open. 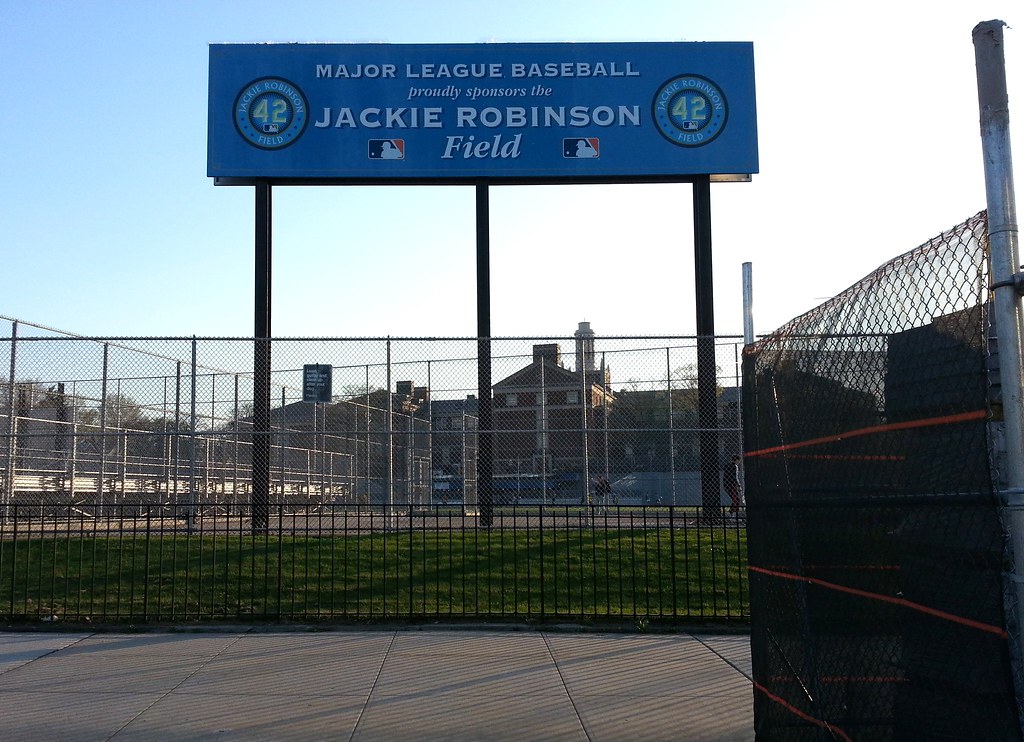