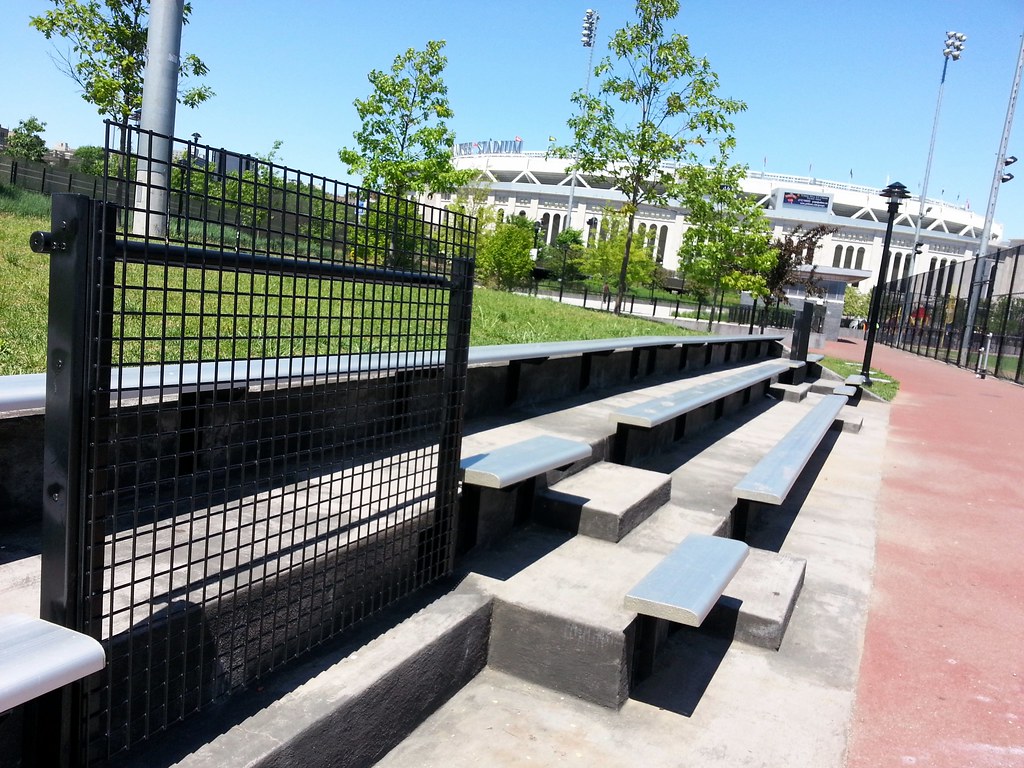 Initially, I thought these might be seats salvaged from the old Yankee Stadium bleachers, the former home of the Bleacher Creatures, but, after poking around on the web for a bit, I can see that they're not. My search wasn't entirely in vain, however, as it led me to this 1956 poem by a young John Updike:

Tao in the Yankee Stadium Bleachers

Distance brings proportion. From here
the populated tiers
as much as players seem part of the show:
a constructed stage beast, three folds of Dante’s rose,
or a Chinese military hat
cunningly chased with bodies.
“Falling from his chariot, a drunk man is unhurt
because his soul is intact. Not knowing his fall,
he is unastonished, he is invulnerable.”
So, too, the “pure man”—“pure”
in the sense of undisturbed water.

“It is not necessary to seek out
a wasteland, swamp, or thicket.”
The opposing pitcher’s pertinent hesitations,
the sky, this meadow, Mantle’s thick baked neck,
the old men who in the changing rosters see
a personal mutability,
green slats, wet stone are all to me
as when an emperor commands
a performance with a gesture of his eyes.

“No king on his throne has the joy of the dead,”
the skull told Chuang-tzu.
The thought of death is peppermint to you
when games begin with patriotic song
and a democratic sun beats broadly down.
The Inner Journey seems unjudgeably long
when small boys purchase cups of ice
and, distant as a paradise,
experts, passionate and deft,
hold motionless while Berra flies to left.