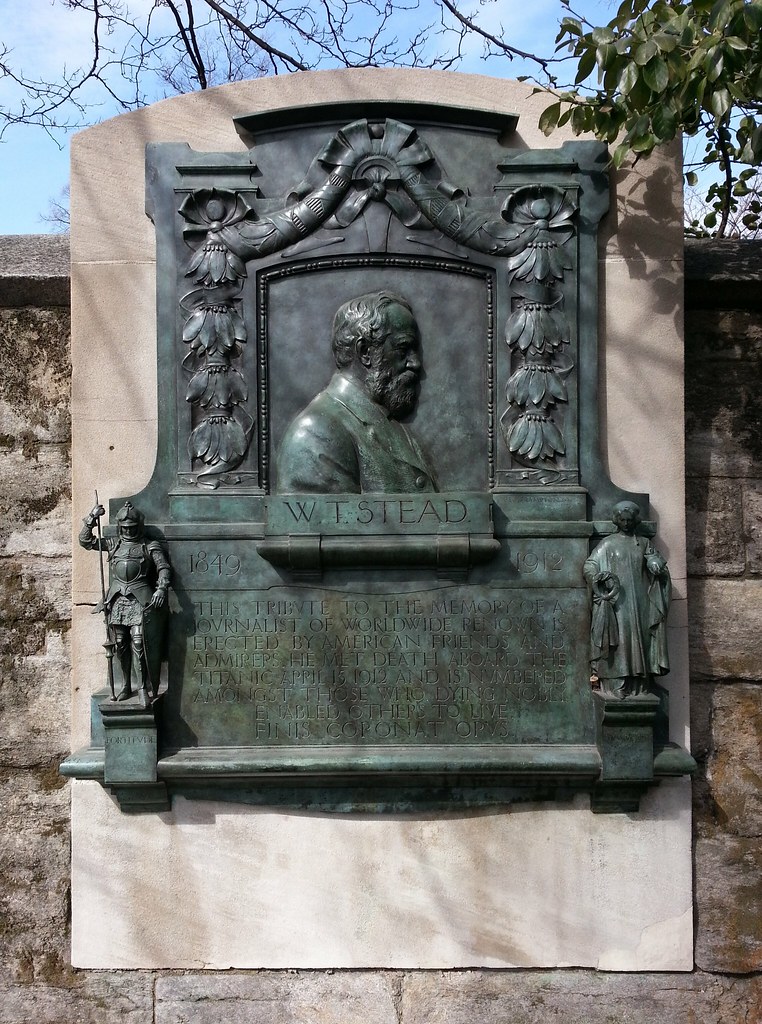 This bronze bas-relief at the edge of Central Park, a replica of the original located on a Thames River promenade in London, memorializes William Thomas Stead, the British "Father of Tabloid Journalism", who lost his life on the Titanic.

An "unabashed sensationalist" and moral crusader, Stead was most famous for his lurid 1885 exposé of child prostitution in London, which he wrote to stoke societal outrage and prompt Parliament to pass a bill that would raise the age of consent for girls from 13 to 16. His campaign was quite successful in these regards, but it also landed him in prison after it was revealed that, as part of his investigation, he had arranged for the purchase of a 13-year-old girl from her parents and had her briefly sent to a brothel. While the girl was never actually prostituted, Stead twice had her examined to certify her virginity, which is to say she was effectively sexually assaulted twice. Although an extreme case, this incident shows how far the man was willing to go to get the story he wanted, in this instance a firsthand account of how easy it was to procure a young girl for prostitution. Of course, he declined to mention his personal role in the affair when he included the girl's tale in his exposé, calling her story "only one of those which are constantly occurring in those dread regions of subterranean vice in which sexual crime flourishes almost unchecked."

(In case you're counting, this is now the second Central Park monument we've seen honoring a man who had a controversial relationship with women's private parts. The first is located just twelve blocks north of here.)

In the 1890s, Stead became increasingly interested and involved in spiritualism. He published many works on supernatural matters, including a collection of "letters" he said were conveyed to him through automatic writing by a deceased acquaintance. Some believed he had foreseen his death on the Titanic in two fictional pieces he had written: an 1886 cautionary tale of the sinking of a trans-Atlantic steamer with an insufficient number of lifeboats — also like the Titanic, it had departed England for New York, and had made its final European stop at Queenstown (now Cobh), Ireland — and an 1892 story that involves a ship striking an iceberg in the North Atlantic.

Stead also became an ardent advocate for peace in his later years; in fact, he was on his way to New York to deliver an address on the subject when he died on the Titanic. I found a satirical 1907 NY Times account of his tireless speechifying entitled "W.T. Stead, Inventor of the Continuous Speech, the Basis of Universal Peace". Here's an excerpt of an imagined transcript of his speeches:

[After briefly speaking about peace...]

If you want to hear the rest of this you must get berths on the train to Pittsburg. It is with great sorrow —

— that I have to inform you, ladies and gentlemen of Pittsburg, that I have only five minutes in which to take the fifteen minutes' ride to your depot. Pittsburgers, when coal is no longer being burned in this world, when steel is pointed out in museums as a relic of barbarism, when libraries are being torn down to make statues of Me and Peace, Pittsburg will be remembered as the city which provided the stage setting and gate receipts for my speech of to-day. Yes, sir, it will be remembered,

— Buffalo will, as the city which provided a hall for the speech I spoke between Pittsburg and —

— Milwaukee. Ladies and gentlemen, the speech that made Milwaukee famous is about to eventuate. Beer and Peace go hand in hand. Nobody ever felt warlike after drinking beer. No, ladies and gentlemen. After dallying with the god Gambrinus, people are sleepy. Now, no nation is so peaceful as a nation asleep. Hence, when the history of the Universal Peace movement is written in deathless script, whatever that may be, the name of Milwaukee will be cited therein as being the city that drugged the gods of war, calmed the ferocious instincts of man, laid low the internal clamorings that bid us go out and kill something, and—and otherwise acted most sensibly and wisely. I am aware that that is a lame sentence, ladies and gentlemen, but you ought to hear some of my sentences. And I don't worry, anyhow. I care not who understands my speeches provided thousands hear them. Goodby. Send my luggage to Syracuse—I mean Cleveland.