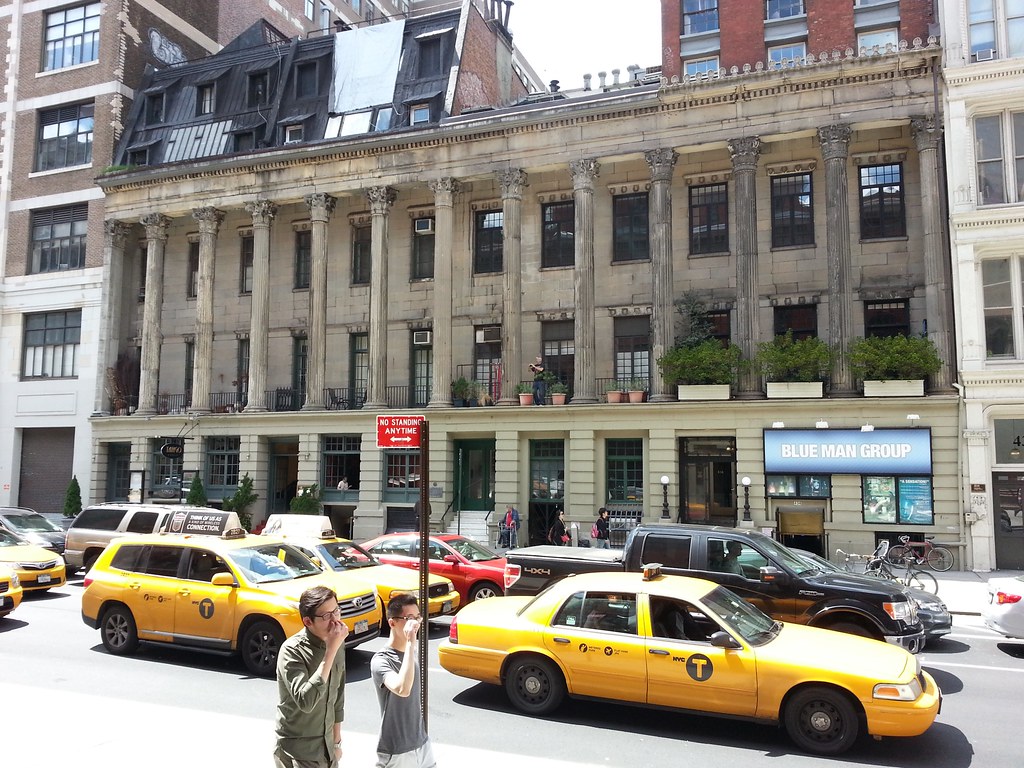 When it was built in 1833 Colonnade Row was the biggest thing in New York since the British occupation, a 200-foot-long sweep of glistening white marble in the form of a Corinthian colonnade, nine houses combined into one great Greek revival statement on what is now Lafayette Street, opposite the Public Theater.

But five of the houses were destroyed early in the last century, and their graceful fluted columns and Corinthian capitals were carted away, vanished from the city with the dust of demolition. Vanished, that is, until a garden designer and a Benedictine monk solved the decades-old puzzle of a mysterious Lost City in the woods of a New Jersey monastery.

The rightmost house in Colonnade Row is currently home to the Astor Place Theatre, where, as you can see, the Blue Man Group performs. Here's an NY Times piece (with lots of photos) about a guy named Sturgis Warner who moved into a 700-square-foot apartment in the little brick addition built on top of that house back in 1978, when it was a mouse- and roach-infested wreck. He fixed up the place and designed and installed all sorts of clever space-saving devices to make the most of the room he had. In exchange for his work, the landlord only made him pay $250 per month in rent.

By the time the article was written in 2009, he was still only paying $500 per month! (I don't know much about paying rent in New York, but the place would go for several times that amount on the open market. Anyone have a better estimate?) The producers of the Blue Man Group had bought the building in 2001, however, and were looking to kick him out so they could take over the whole place as their own living quarters. I have no idea what's transpired since then, although there is still a whitepages.com listing for Mr. Warner at this address, for what it's worth. 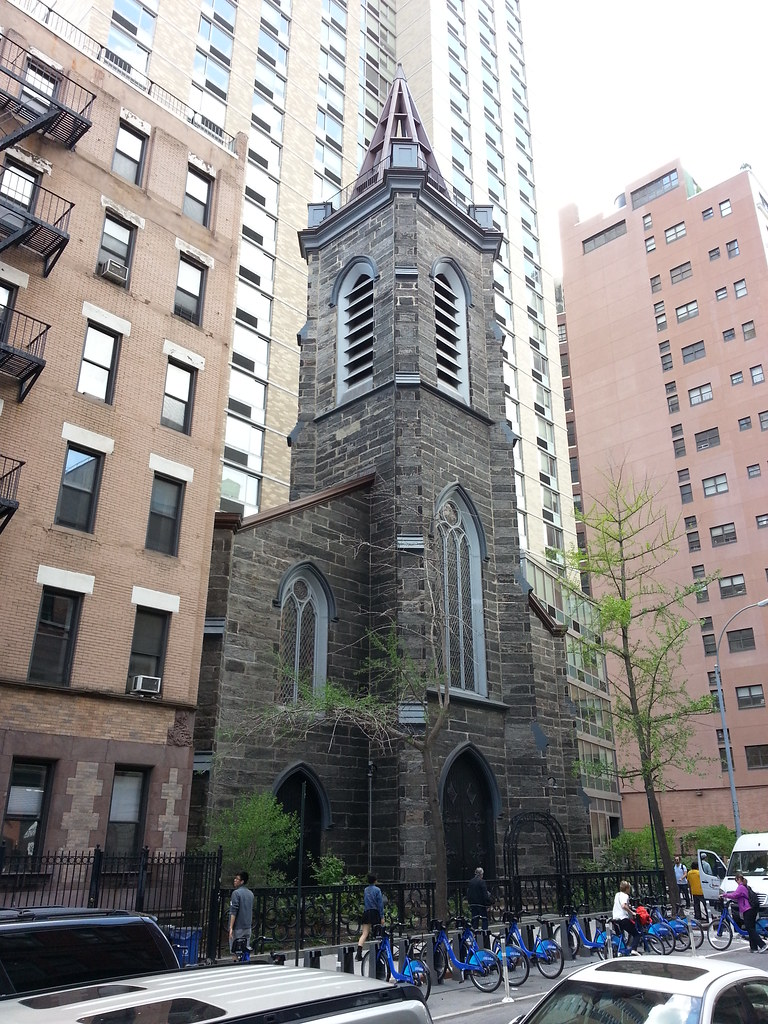 It used to be a church, at least. What you can't quite see in this photo, but which is much clearer from the other side, is that the facade is the only part of the structure still standing. The rest, erected in 1870 by St. Ann's Roman Catholic parish (the church became St. Ann's Armenian Catholic Cathedral in 1983), was demolished in 2005 to make way for the 26-story NYU dorm standing behind it, the tallest building in the East Village. (Not long after the dorm was put up, the City Council approved a rezoning plan limiting building heights in the area to about 12 stories.)

This was actually an example of history repeating itself, to a degree. The extant facade dates to 1847, when the original church on the site was built by the 12th Street Baptist Church. (The building later became a synagogue, home to Congregation Emanu-El.) But in 1870, leaving the facade in place, St. Ann's tore down the rest of the structure and replaced the sanctuary with a new one, which was then in turn replaced by the dorm some 135 years later.

As you might imagine, many neighbors and preservation-minded people were upset with the destruction of the church's body and the subsequent construction of such a bland-looking behemoth in its place. I like the overall effect though, specifically the weirdness of there being a 19th-century stone church facade standing, for no apparent reason, in front of an insipid 21st-century apartment tower. The facade is now effectively a piece of public sculpture and something of an architectural folly (meaning "a whimsical or extravagant structure built to serve as a conversation piece, lend interest to a view, commemorate a person or event, etc."), which I think probably encourages more passersby to interact with it than ever did with the church when it was still intact.

Day 1: FERRYBOAT ADVERTISING WORKS FOR YOU!