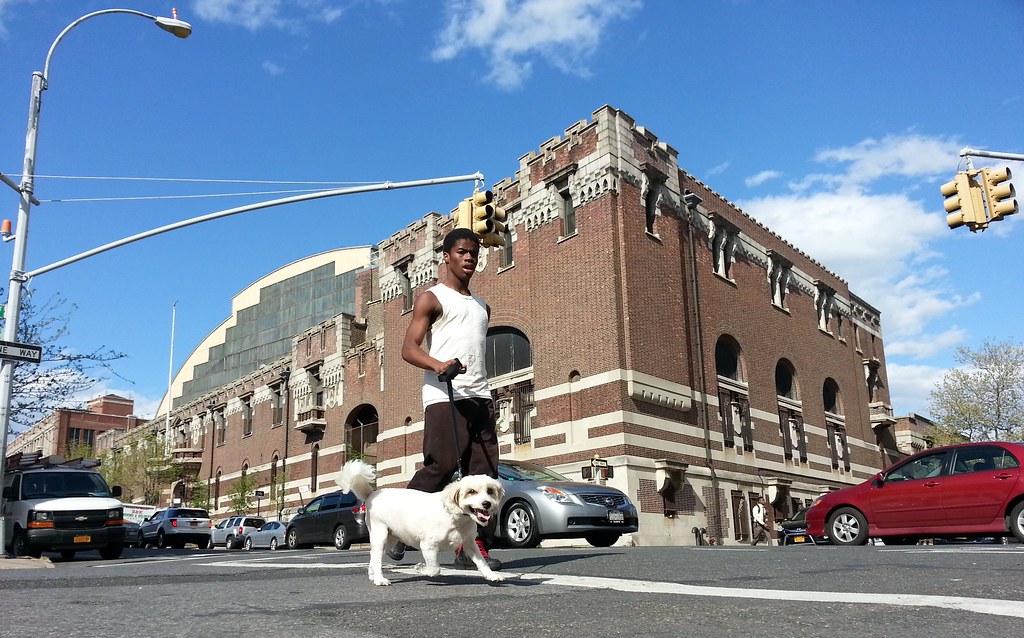 past the old Troop C Armory on Bedford Avenue in Crown Heights. This and the next few images are from a short unofficial stroll around the neighborhood.

Another angle on the old Troop C Armory 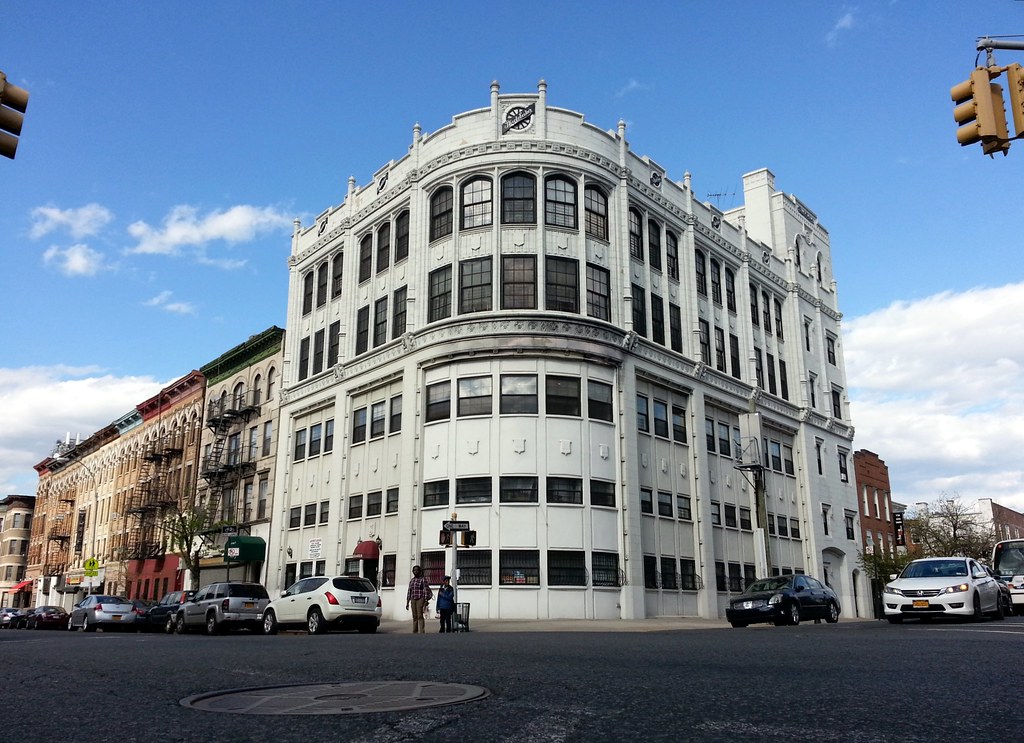 Erected in 1920, this former Studebaker showroom (circa-1942 photo) dates back to the days when this stretch of Bedford Avenue was known as Automobile Row. The building has since been converted into low-income apartments, but some traces of its original occupant still remain, most notably the terra-cotta wheel logos (close-up) at the top of the facade. Perhaps you recall seeing those same logos on an old Studebaker finishing facility up in Manhattanville a couple of months ago. 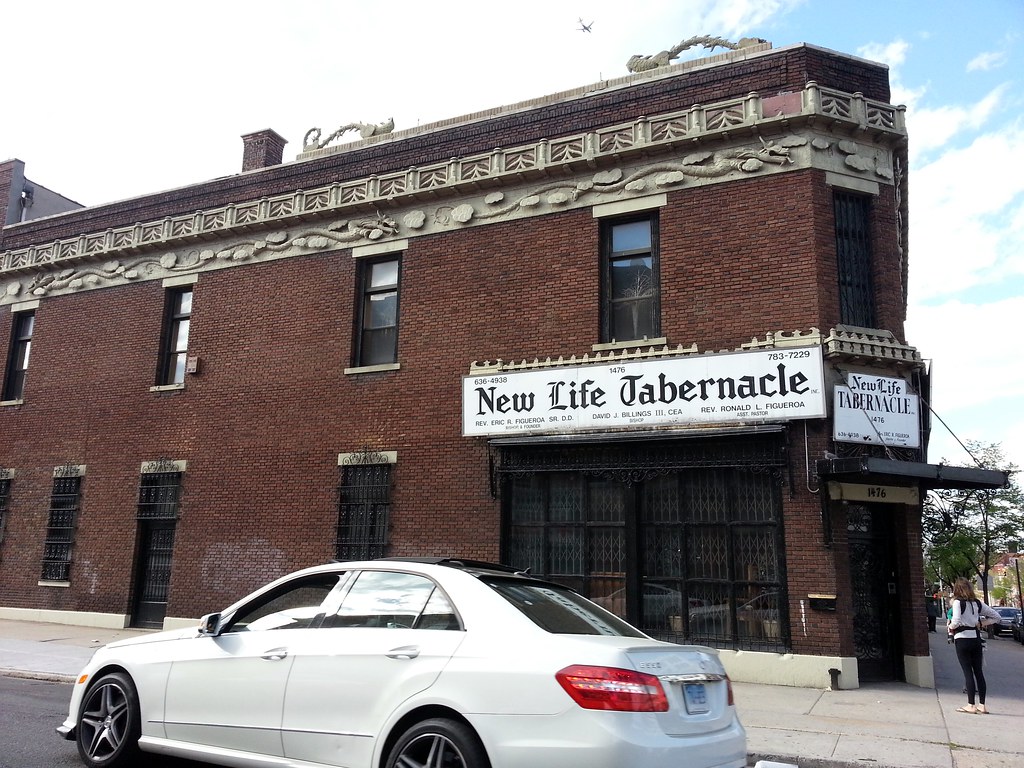 Like the Studebaker Building that stands across the street, this two-story brick structure was once an automobile showroom. (It looks more showroom-like from the other side.) It later — some sources say 1929 or 1930, but ads from 1932 still list an auto dealer at this address — became the home of Loehmann's, the legendary discount designer women's clothing store started by Frieda Loehmann after her flutist husband's paralyzed lip left the family in need of a stable income.

At first glance, the building is nothing to write home about, but then you start to notice a few things, like the dragons flying through the clouds on the frieze. Mrs. Loehmann had a fondness for such over-the-top ornamentation; in fact, the place looked even more outlandish in its heyday — take a peek at what's hidden beneath those church signs. And the interior was a sight to behold as well:

Hundreds of racks of clothes failed to dim the theatrical splendor inside. The decor was compounded of marble floors from Italian palazzos, antique Italian wall paneling, huge Italian marble statues and junk that Mrs. Loehmann couldn't resist from Seventh Avenue showrooms that closed. Her chairs were all covered in old fur coats. She had a leopard sofa with nutria.

Not to mention the "chandeliers, dripping prisms, enormous paintings, Venetian columns festooned in gold, lions in iron and lions in marble, huge lanterns and torchieres with figures holding clusters of lights aloft". All of these furnishings were auctioned off in 1962 after Mrs. Loehmann died, but many of them were acquired by a clothier named Martin Kogut who restored much of the decor when he opened his own store in the building. Here are three grainy photos of the interior of his store in 1966, along with other pictures of the building in different eras. As you can see in a couple of those shots, the church that currently occupies the place decided to retain some of the decor.

One might suspect that Mrs. Loehmann intended the lavish furnishings to imbue the shopping experience with an air of refinement, but the actual scene at her store was apparently rather primal, with women aggressively competing to find the best bargains and stripping down in the open to try on the merchandise — there were famously no dressing rooms at Loehmann's. (The Loehmann's stores that recently went out of business were an offshoot of Mrs. Loehmann's standalone establishment, but they also offered communal changing areas.) Here's how a reporter for the Brooklyn Daily Eagle described his trip to Loehmann's with his wife in 1954:

Loehmann's, on Bedford Ave. — with its stained glass peacocks and carved dragons — looks from the outside like the pleasure dome of Kubla Khan. Inside, it has much the same atmosphere as a capsizing ferryboat. . . .

[Women] invade the place daily in ravening hordes to peel non-chalantly before a gallery of gaping husbands and do battle for the prizes hidden away among the dress racks. . . .

In a small arena walled by dress racks, a battalion of frenzied females was stripping off its outer garments and mounting an assault wave on Mrs. Loehmann's wares. Some of the women were practically stripping one another.

A few of the lady shoppers, to the special satisfaction of the spectators' gallery, were wearing two-piece affairs and I even caught a couple of glimpses of black lace.

Day 30: The Belles of Southern Boulevard