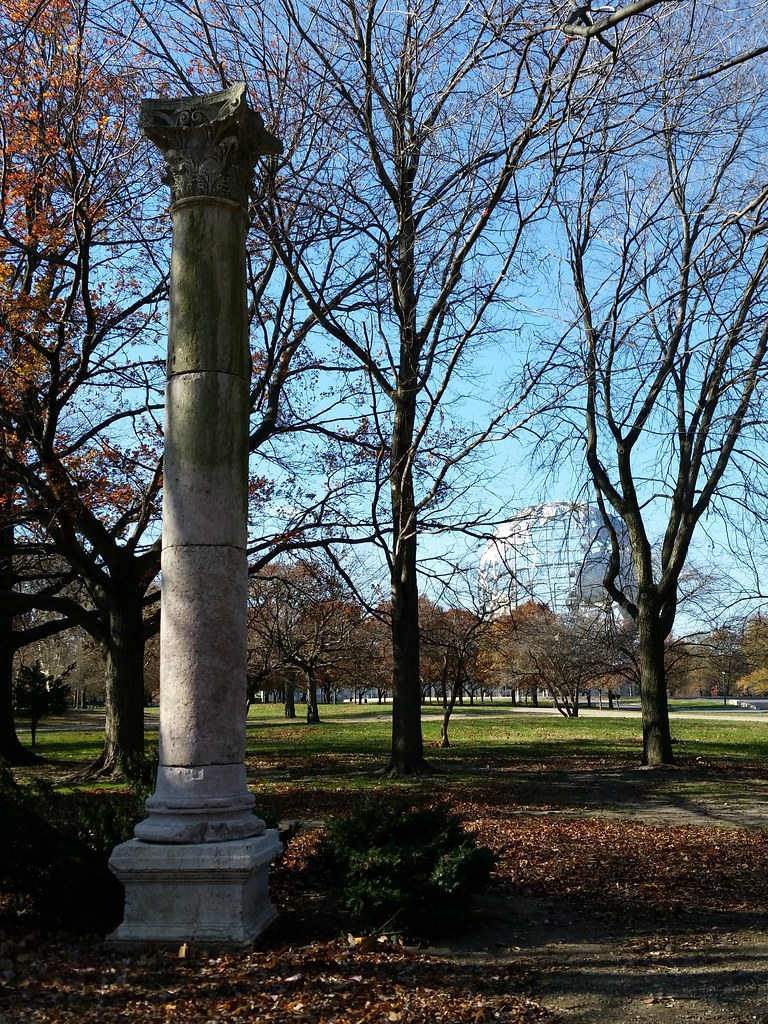 This column, dating back to 120 AD, was originally part of the Roman Temple of Artemis* in the ancient city of Gerasa (today's Jerash, Jordan), and it was given to NYC by Jordan's King Hussein to commemorate his country's participation in the 1964-65 World's Fair. Standing next to the column during the fair was the Jordanian pavilion, notable for its undulating architecture, its exhibition of a Dead Sea Scroll, and its controversial anti-Israel mural. (Speaking of the 1964-65 World's Fair, that's the Unisphere in the background of this shot.) As far as I know, there's only one man-made outdoor object in the city that predates this column: the much older Cleopatra's Needle in Central Park.

* According to the inscription on a nearby stone tablet, the columns of the temple are known, intriguingly, as the Whispering Columns of Jerash. As cool as that name sounds, however, I can't find a convincing account of what it means, or even any convincing evidence that it's actually a common name for the columns. (Most mentions of it on the web have to do with this column in Flushing Meadows rather than the remaining ones in Jordan, raising the interesting possibility that the aforementioned tablet itself might be the source of the name.)

The most popular explanation for the name — found, among other places, on a New York Public Library blog — is that it refers to the whispering gallery effect created by the geometry of the temple, but that sounds suspicious to me. I don't understand how an open area of columns in a rectangular temple could form a whispering gallery. There is, however, an amphitheater in Jerash with this acoustical property. I wonder if the temple and the amphitheater have simply become conflated over time, at least in the mind of the person who wrote the text for the tablet here in the park.

Another possibility is that "whispering" describes "the sounds of the wind rustling among" the columns. The columns apparently sway a bit in the wind — which this blog post refers to as whispering — so perhaps this explanation holds some water. Or maybe it's all baloney. Who knows?