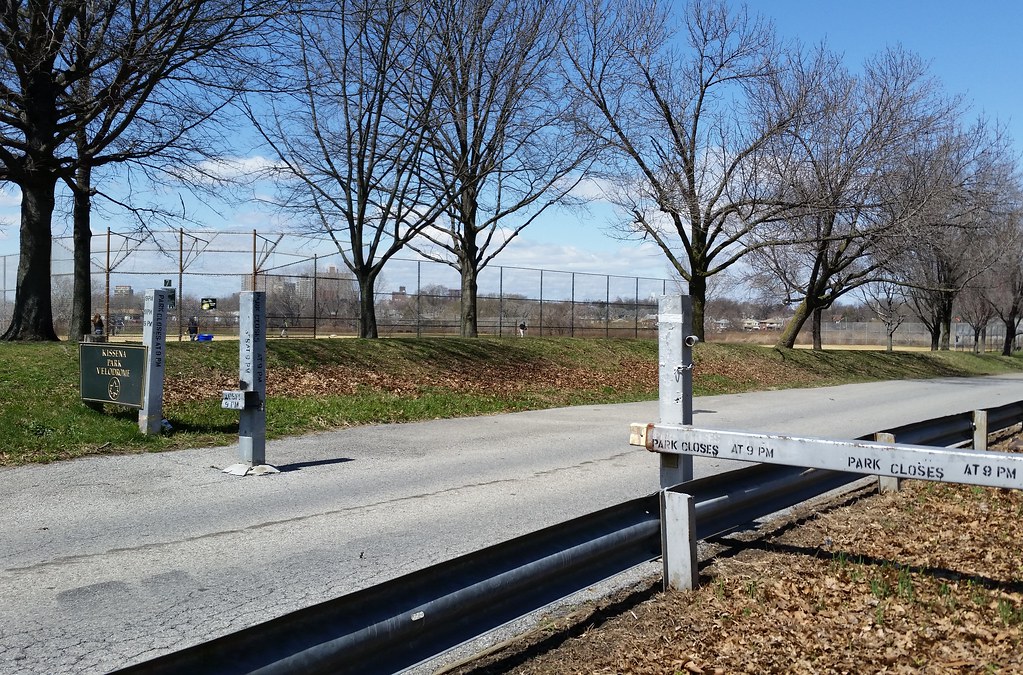 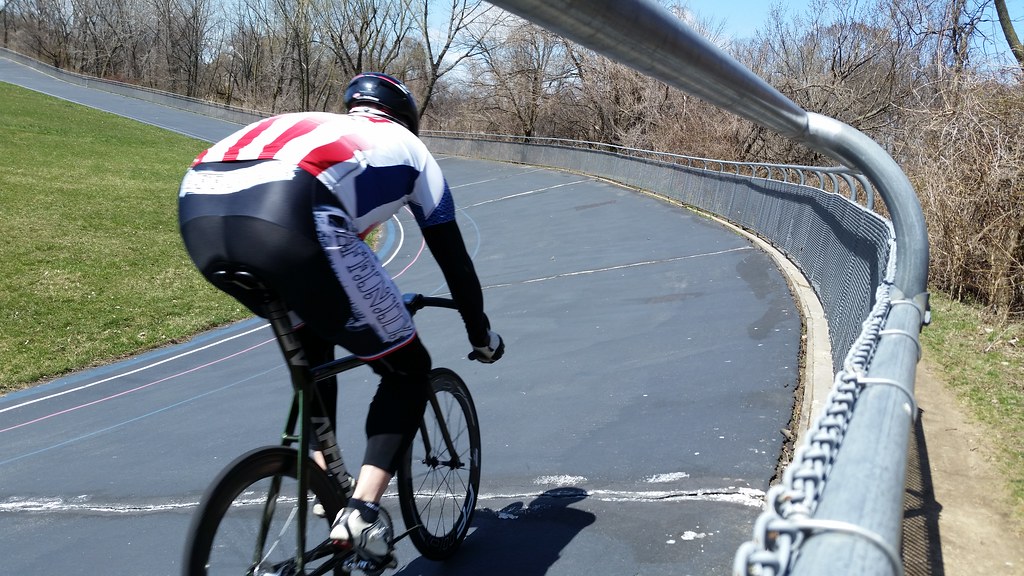 The Kissena Velodrome, one of 29 or so velodromes in the country, hosted the 1964 US Olympic track cycling trials. By 2002, however, after years of neglect, it was in such poor condition that an article in Bicycling magazine declared it "the nation's worst cycling track". It was rededicated in 2004 after being renovated as part of NYC's failed bid for the 2012 Summer Olympics, but now, more than a decade later, it appears to have sprouted a nice array of cracks once again. 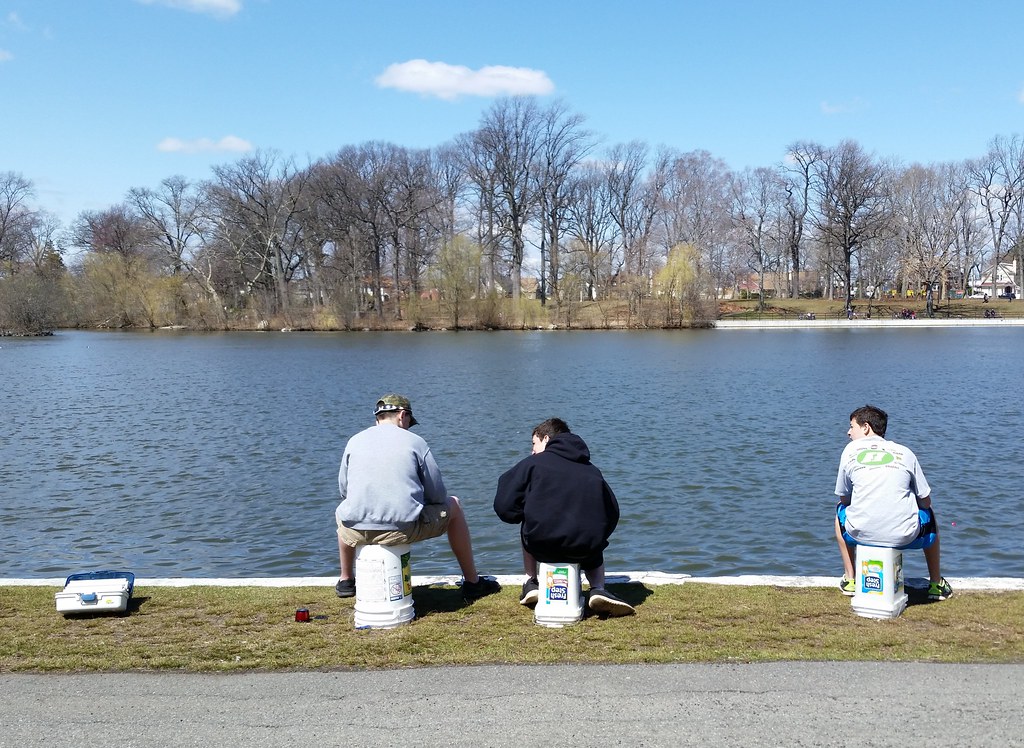 Perhaps expressing a yearning for a simpler life of rustic pleasures, these young fishermen are spending this sunny spring Saturday sitting beside Kissena Lake, their lines idling in its still waters. The gentleman on the left is clearly the leader, as indicated by his camouflage hat and authentic overturned five-gallon bucket. (Note the rinky-dink kitty-litter pails that his more citified companions are perched upon.) As I walked by, a country song — about fishing — was playing on their portable stereo.

UPDATE: A few months later, nutrient-rich runoff that was washed into the lake by a flash flood triggered a bloom of blue-green algae that killed at least 150 fish. 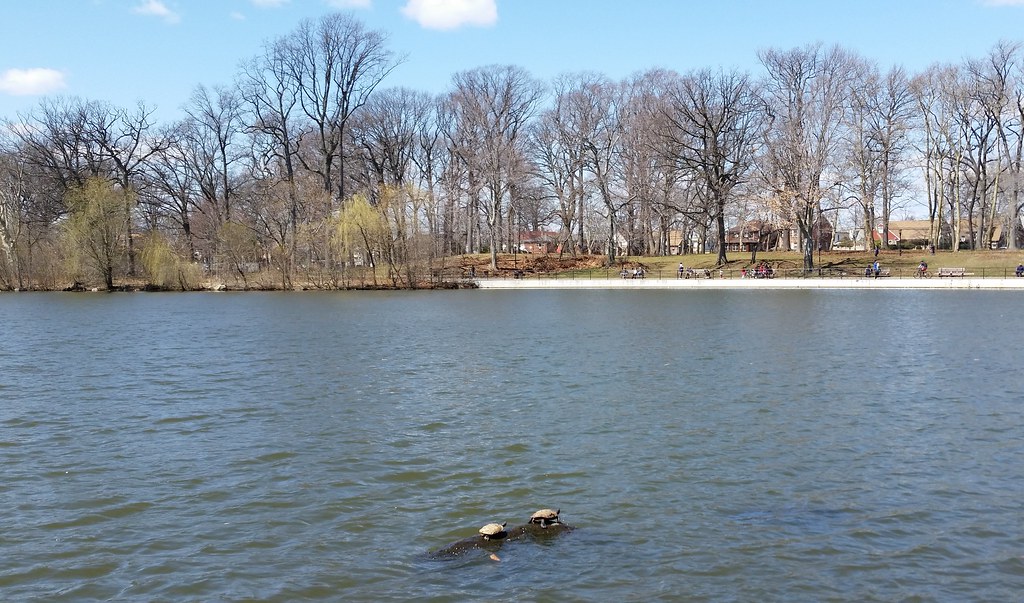 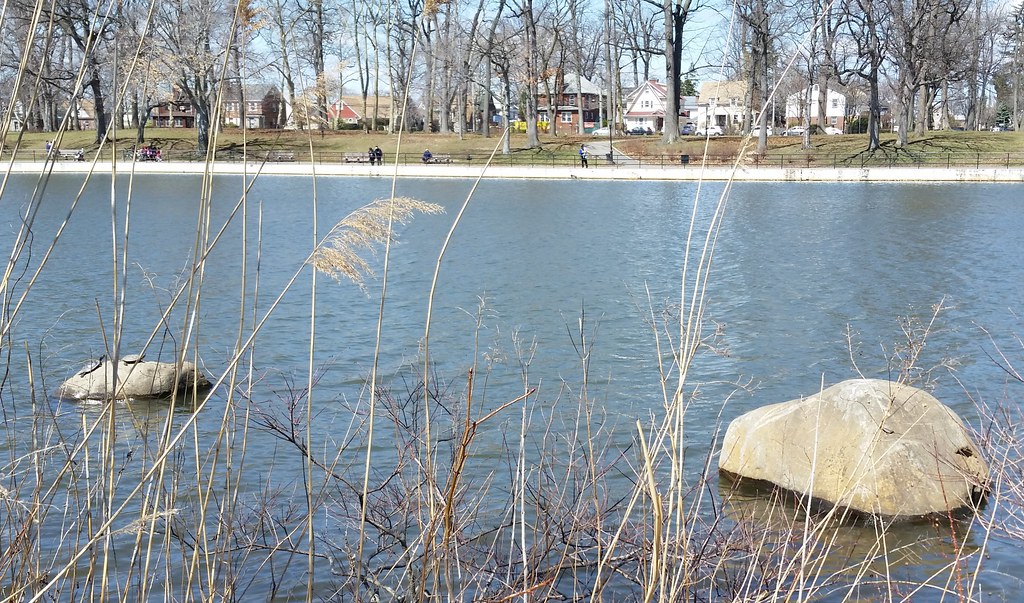 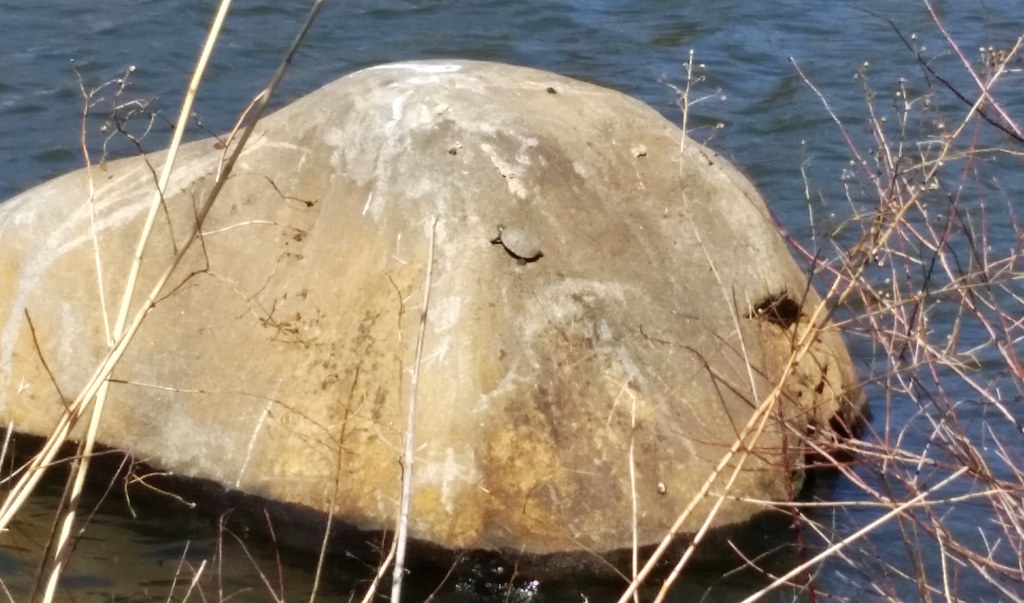 I saw a number of turtles sunning themselves on the rocks of Kissena Lake today. 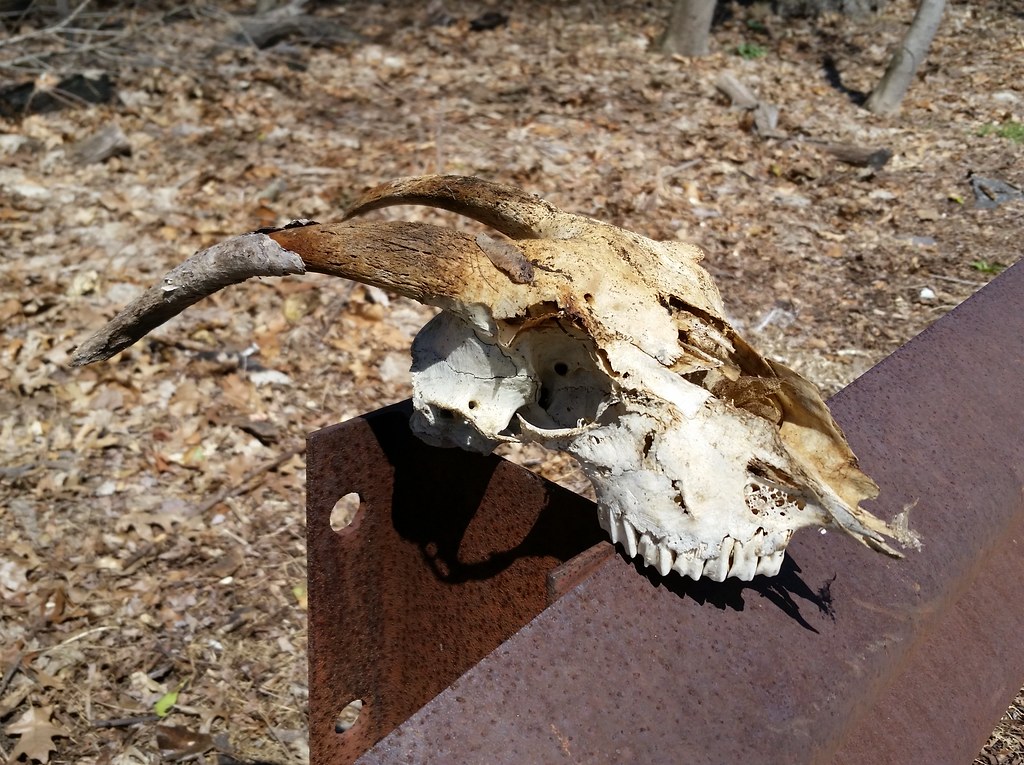 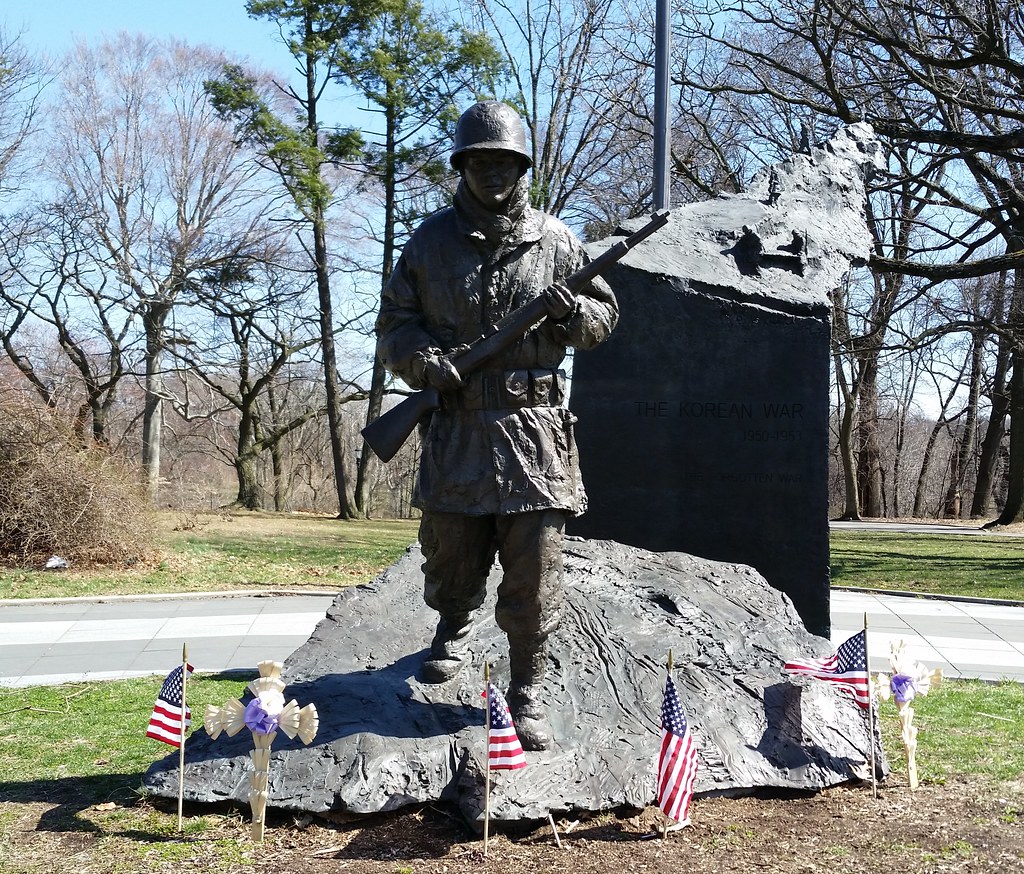 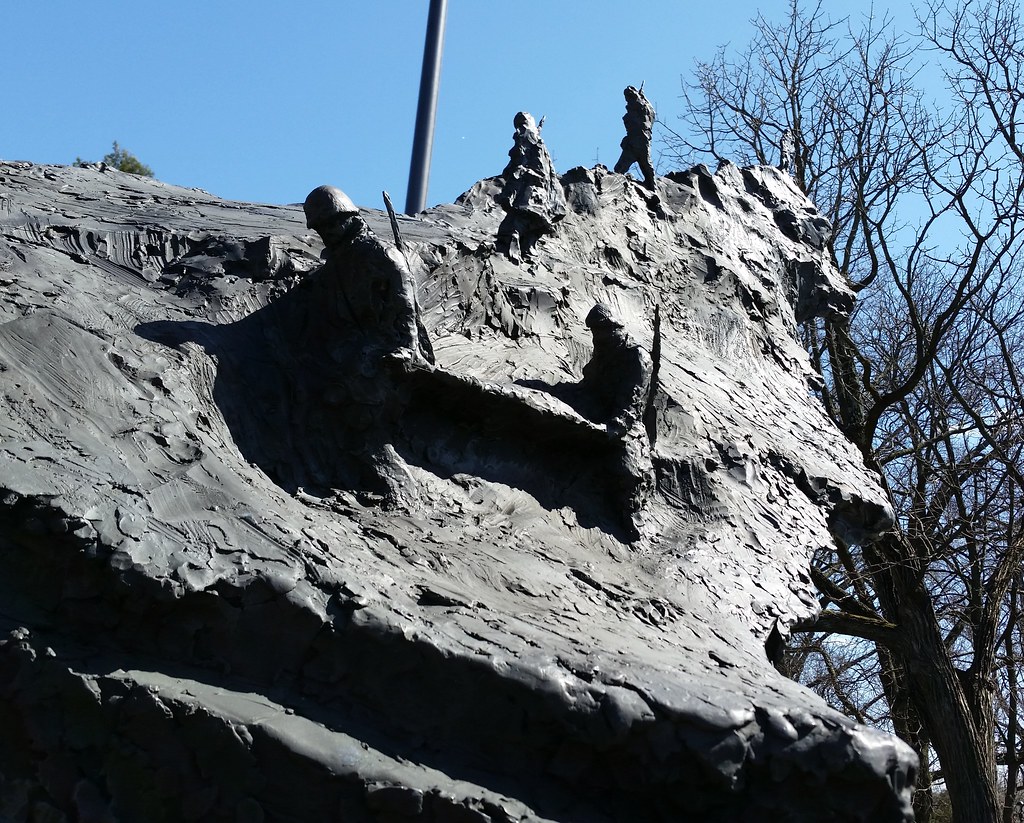 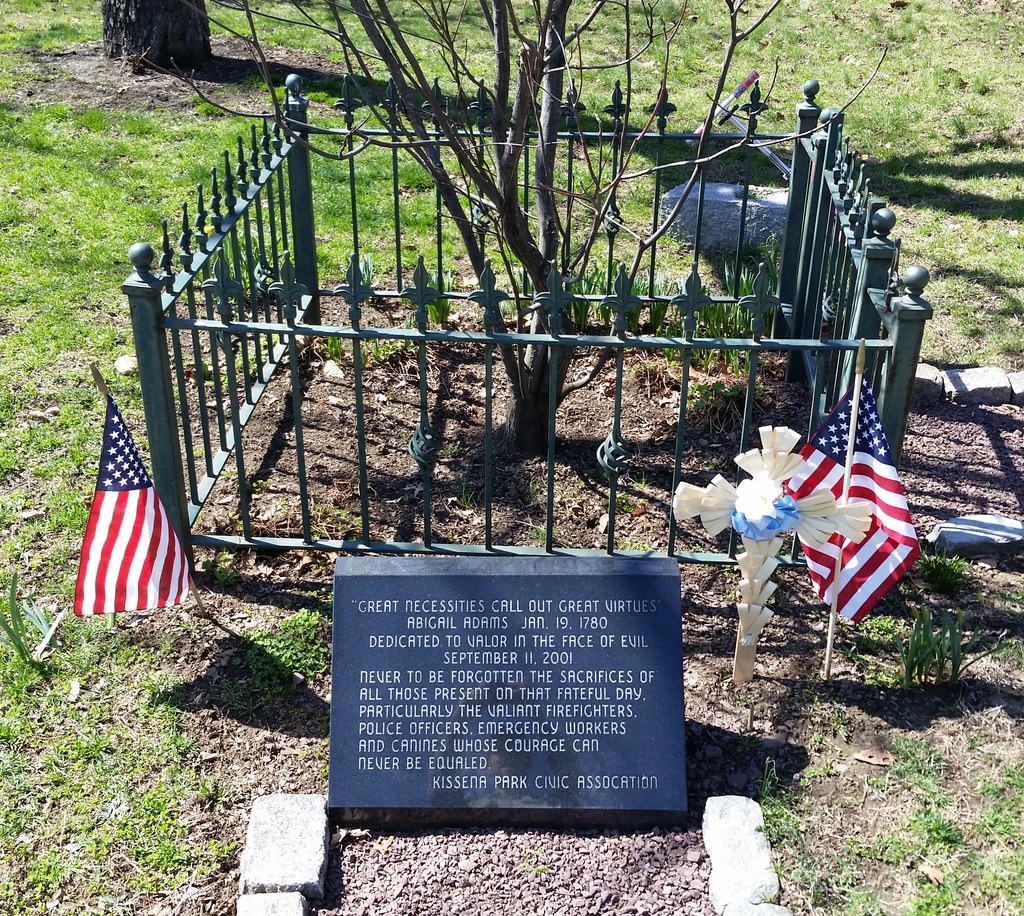 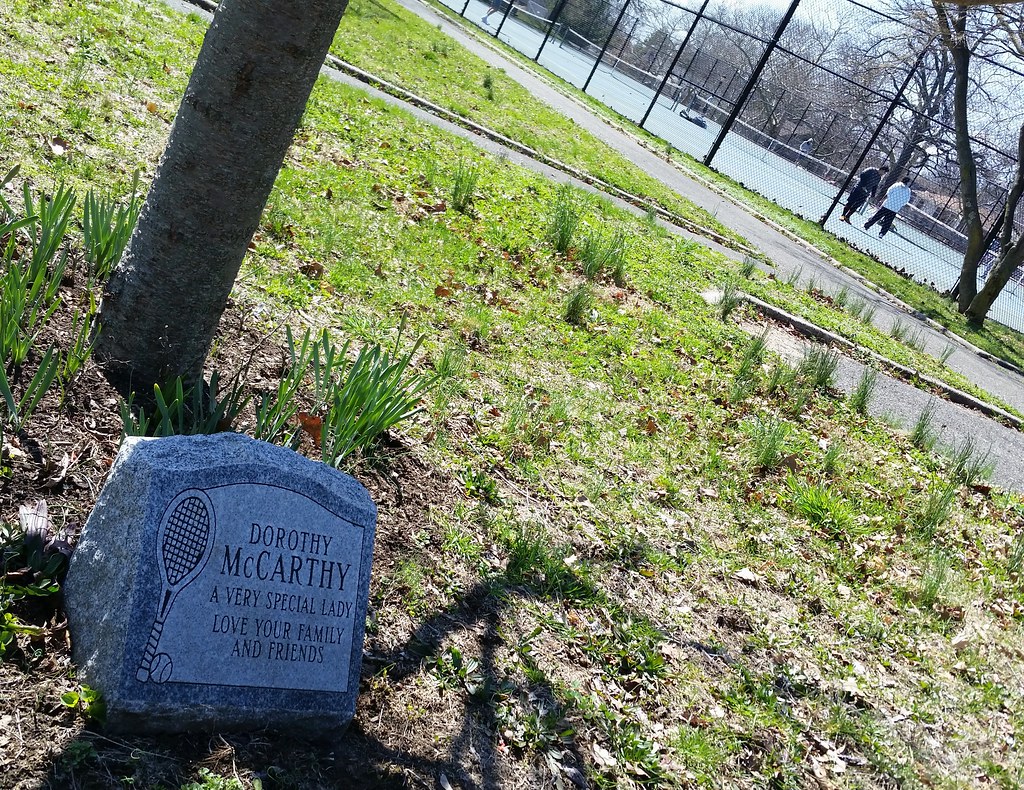 This little monument and the ones from the previous two photos (Korean War and 9/11) are all located in the same part of Kissena Park. As I was walking through the area, I saw three young girls wandering around and inspecting everything. They were discussing whether the Korean War memorial or the 9/11 one was more important. The size of the Korean War memorial makes a seemingly indisputable case for it being the more important of the two, but, then again, I would imagine that if I were a young New Yorker, even if I had not yet been born when the twin towers came crashing down, any mention of 9/11 would probably seem far more powerful than even the most imposing monument to some long-ago war I'd never heard of.

When the girls reached Ms. McCarthy's memorial, the youngest one asked what it was. The oldest took a minute to examine it and then announced: "Dorothy McCarthy. She played tennis and was loved."

A railroad ran through it 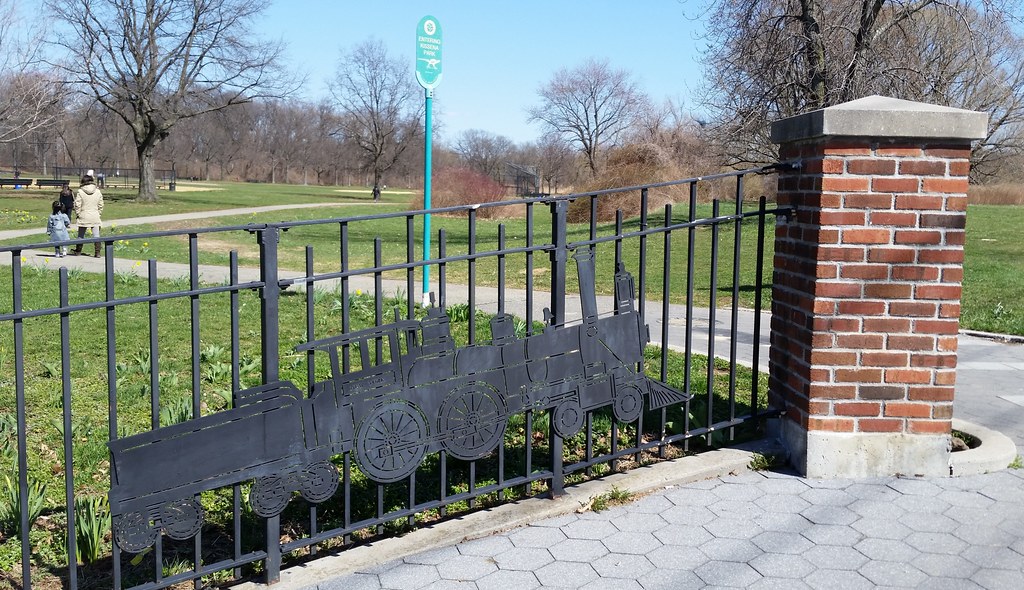 According to a nearby plaque set amid some pavers designed to resemble railroad ties, the short-lived Flushing-to-Creedmoor section of A.T. Stewart's Central Railroad of Long Island passed by this spot on its way through what is now Kissena Park. As we've seen, portions of the railroad's route east and west of Kissena Park have been incorporated into Kissena Corridor Park. 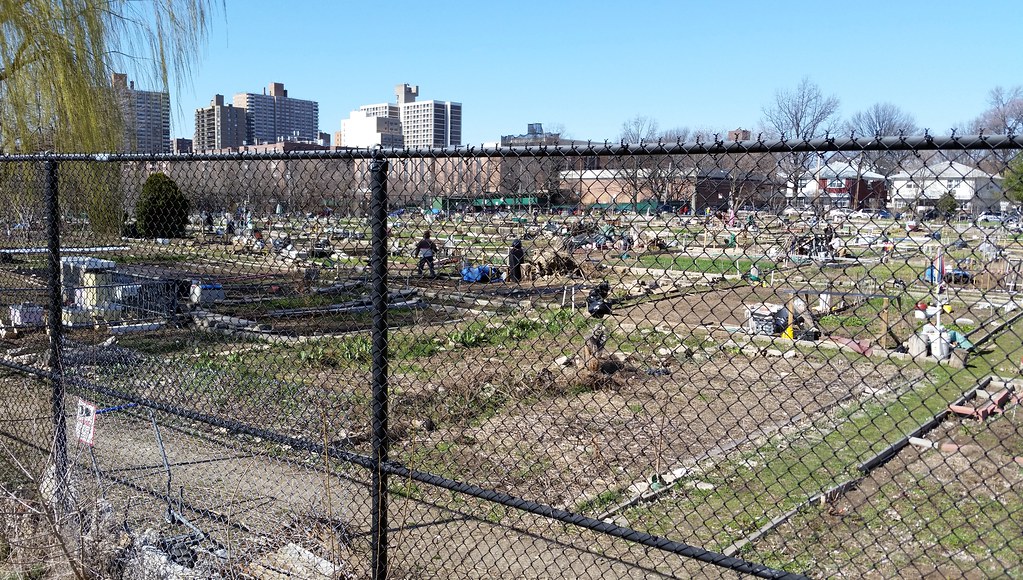 In recent years, there's apparently been a lot of strife at this huge community garden (aerial view) in Kissena Corridor Park. According to a 2013 Wall Street Journal article:

Despite its serene setting and rows of flowers and vegetables, a community garden in Flushing, Queens, has turned into a battlefield.

Violent fights, death threats and shouting matches, sometimes involving fistfuls of dirt, have become routine at Evergreen Community Garden, leading to volunteer guards at the entrance and police patrols. And almost all of the tangles involve elderly Korean gardeners, officials and witnesses say.

The disputes grew out of the city Parks & Recreation Department's decision last year to take control of the 5-acre garden from a Korean-American senior citizens' group, which had transformed the trash-filled public space into a working garden back in the early 1980s.

The parks department—which contends the seniors' group had been improperly selling produce from the city-owned plot and excluding outsiders—turned control of the park over to its GreenThumb network of community gardens and installed a manager last year.

But the older gardeners are still trying to reclaim the land, at times by drastic means.

A year ago, the garden's 75-year-old former manager clutched a lighter and container of gasoline, threatening to light himself on fire if he didn't get his old job back, city officials said. The incident prompted a police hostage negotiation team to respond and two nearby schools to be locked down.

You can read the rest of the story here (text-only version here). 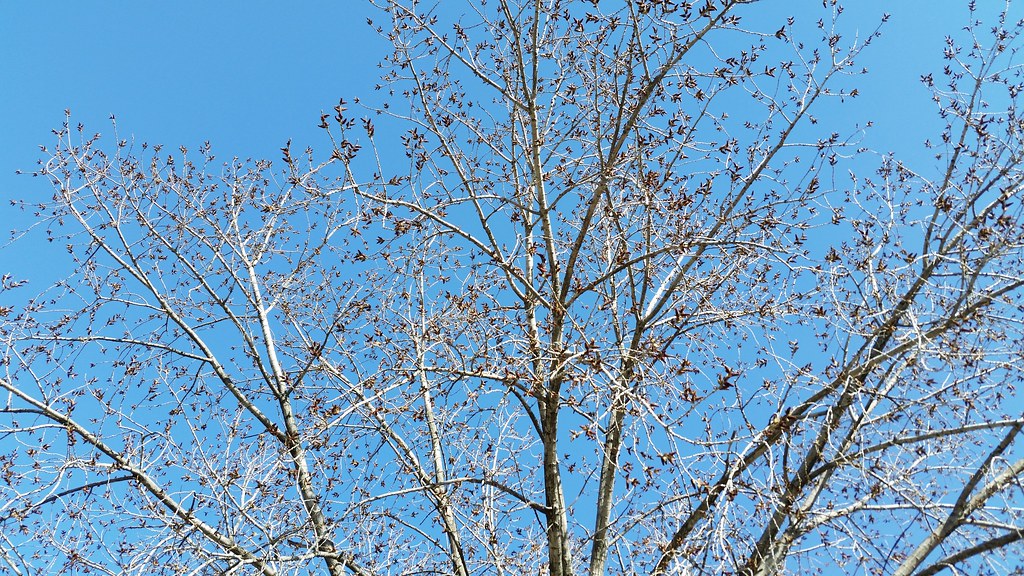 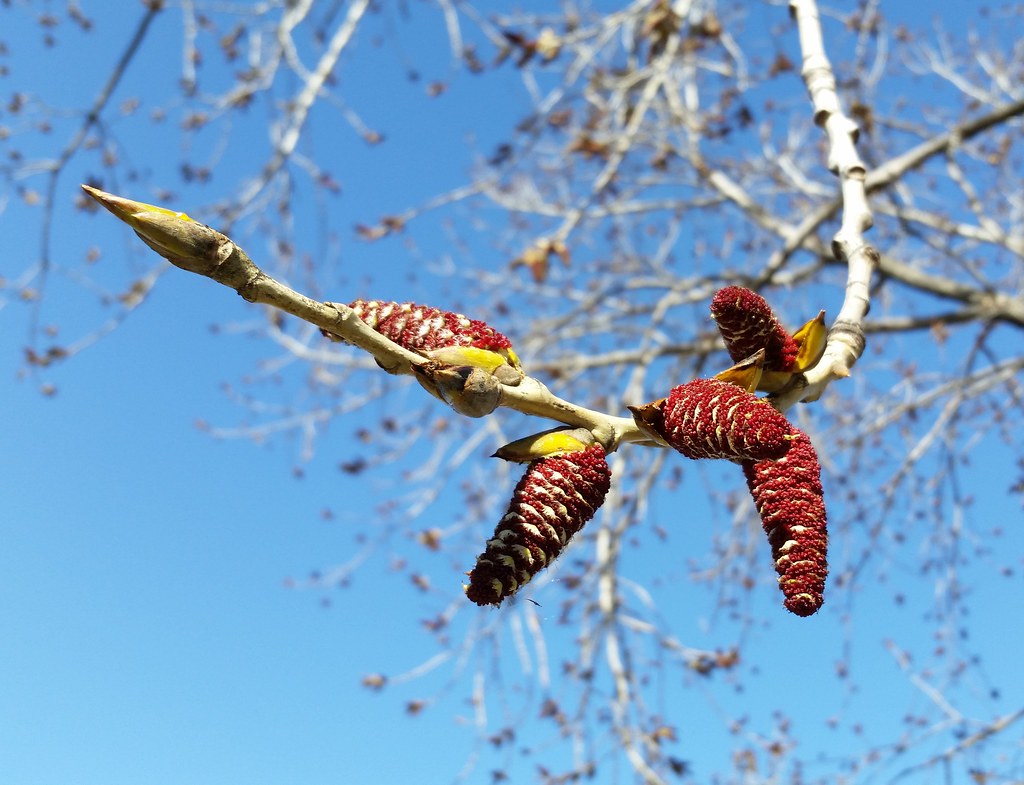 This is a male cottonwood. It's the females that produce the seeds with the fluffy white sails that give the trees their name. 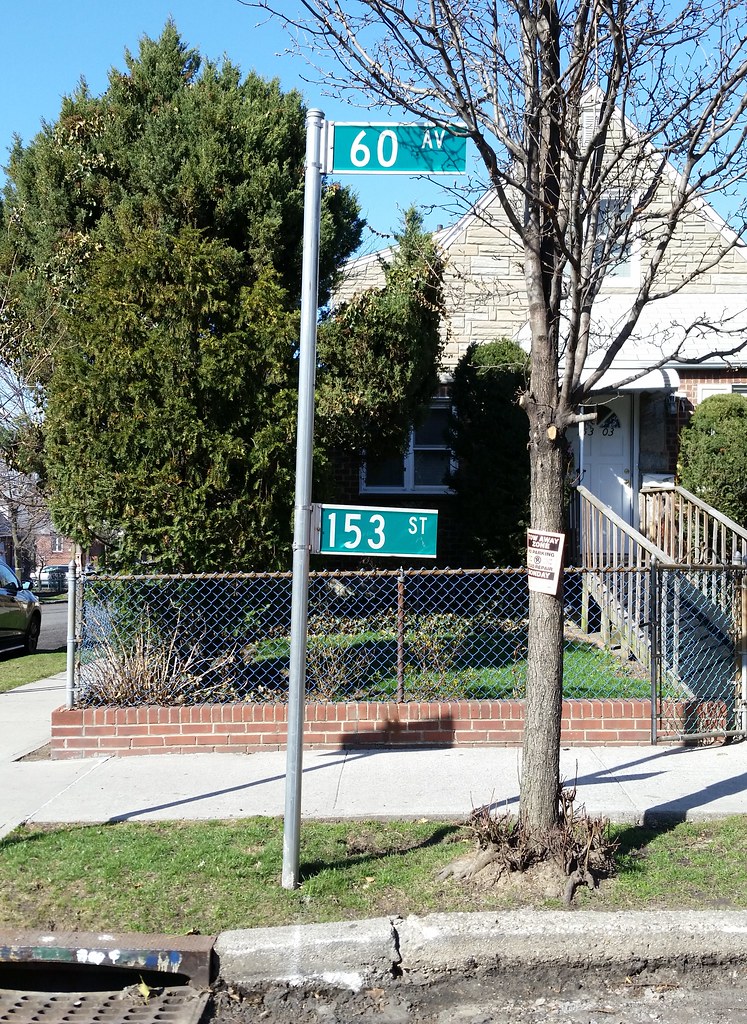 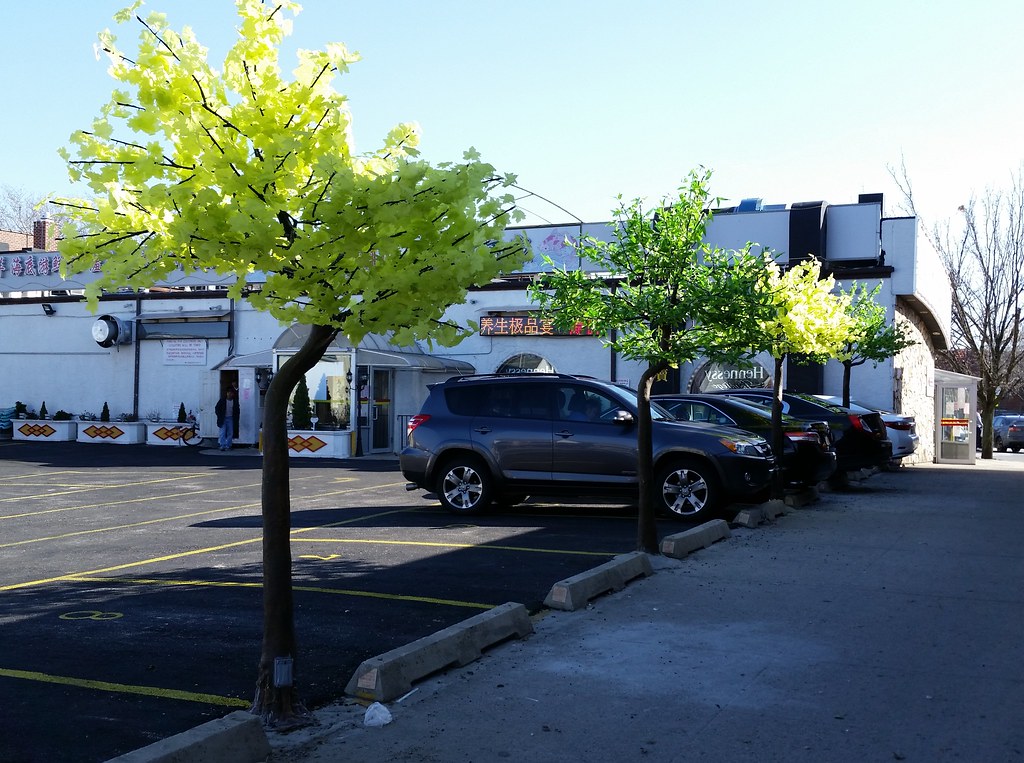 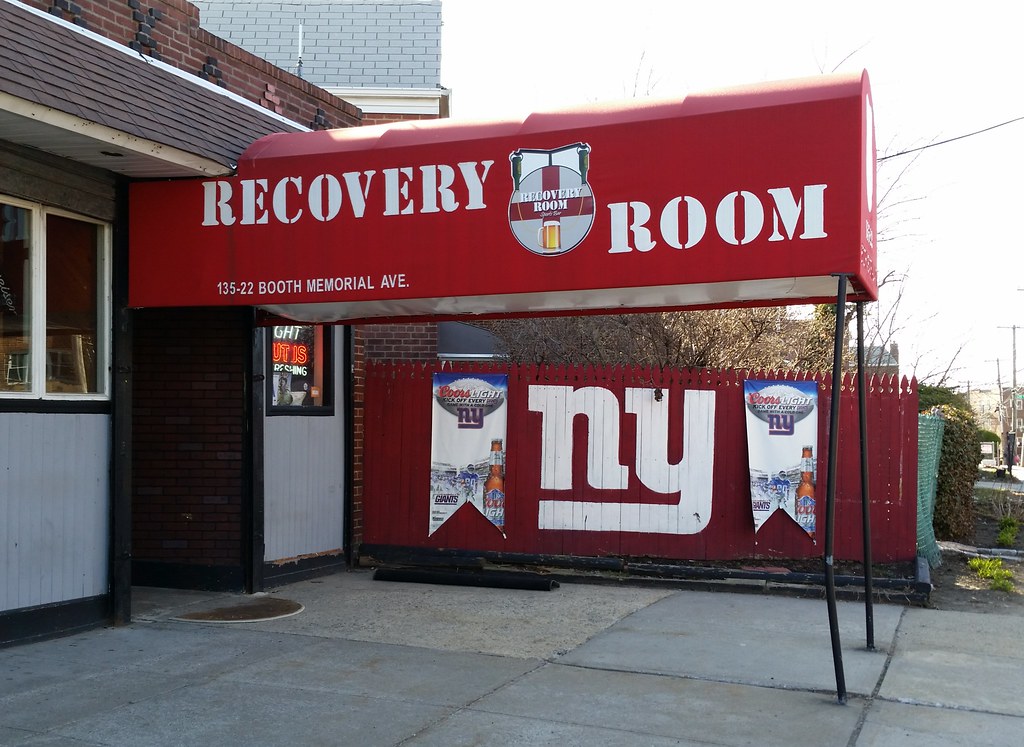 After throwing back a few in the Emergency Room, be sure to stop by the Recovery Room, located just over three blocks from New York Hospital Queens. 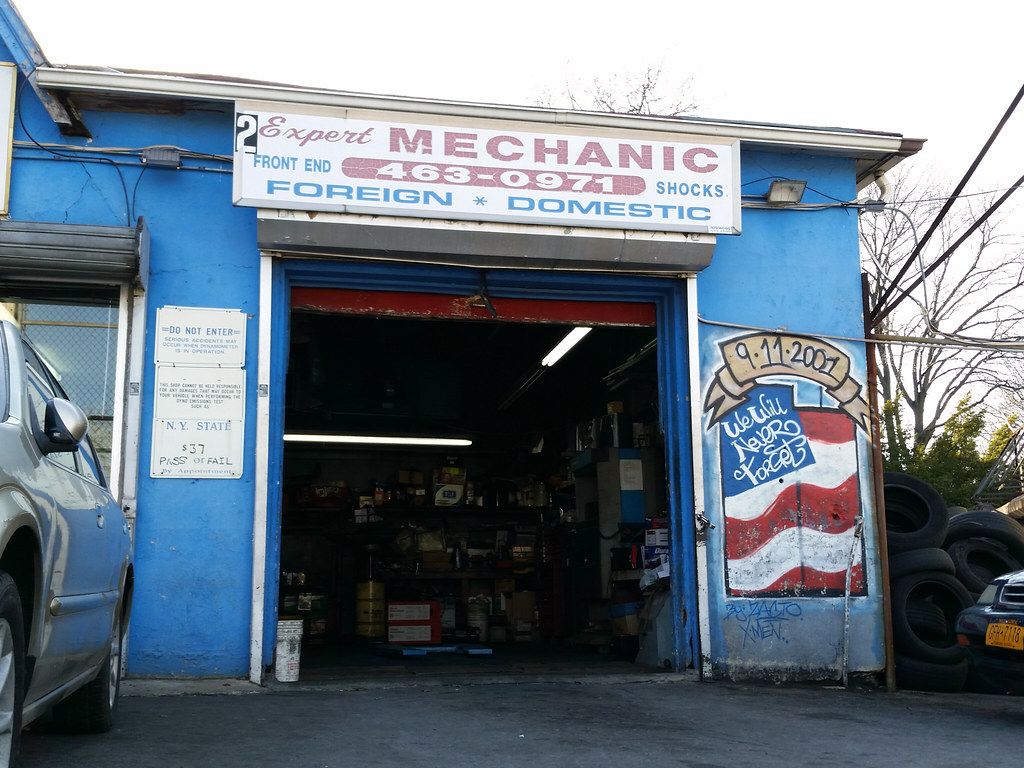